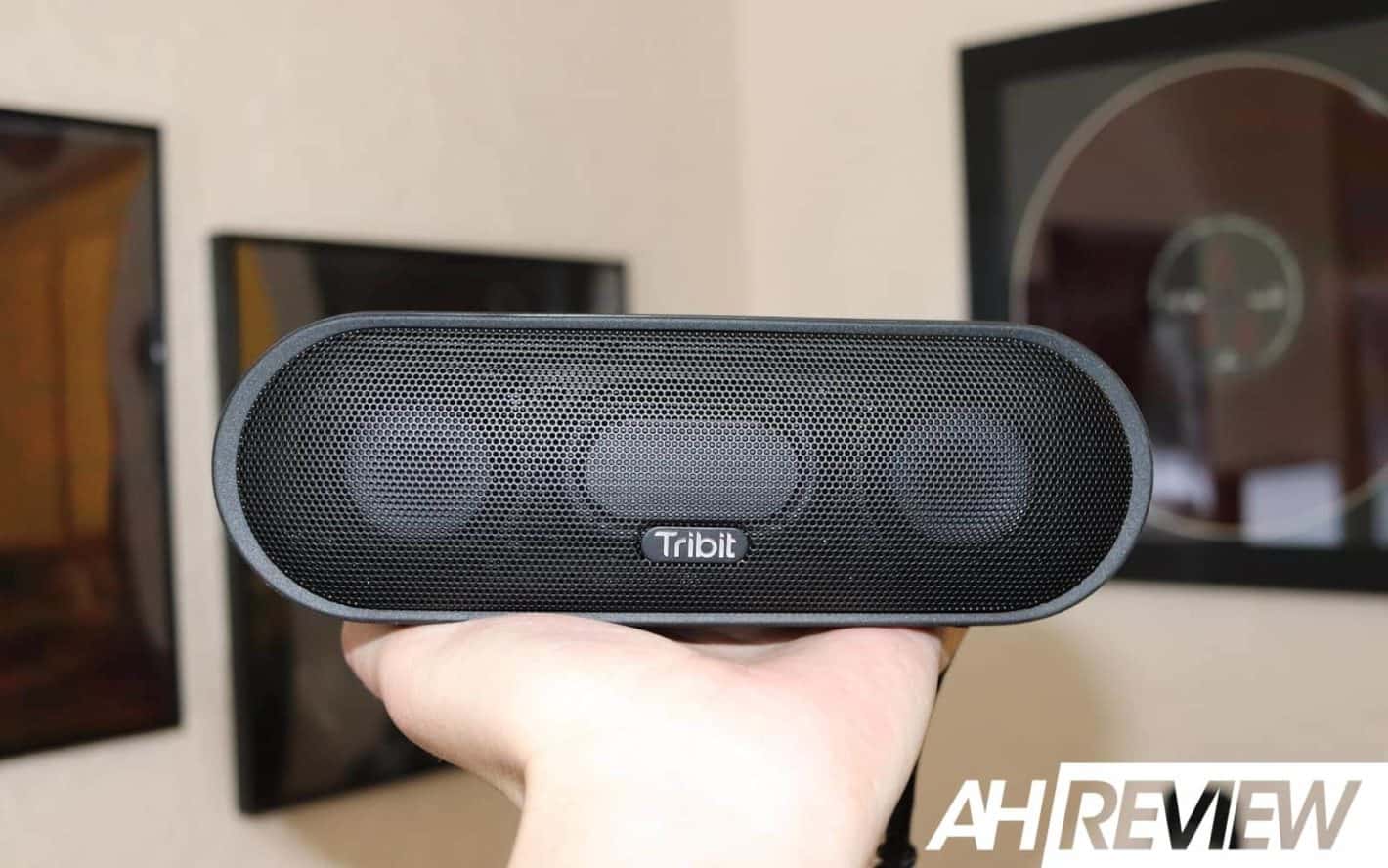 Tribit’s MaxSound Plus strikes well above its weight in both intonation and bass punch.

Tribit is at it again with its most powerful high-quality Bluetooth speaker yet, the Tribit MaxSound Plus, and as might be expected, this is another listening device from the company that packs a punch well above its weight. Stamped with a price tag that’s just short of $56, Tribit’s MaxSound Plus incorporates dual drivers and dual passive bass radiators for high-fidelity sound at a true bargain.

That’s neatly packed into a soft-touch plastic frame behind a premium metal speaker grate with ruggedization to spare, decent battery life, and looks that will fit nearly any environment. So it goes almost without saying that anybody looking for a Bluetooth speaker for just about any purpose will want to take a look.

The most important specifications for this speaker are its inclusion of two 45mm diameter passive bass radiators and dual 12W speakers. The frequency range for those falls in at around 80Hz to 20KHz, while the signal-to-noise ratio is listed at ≥80dB.

Tribit doesn’t skimp as much as some other Bluetooth speaker manufacturers when it comes to inclusions out-of-the-box. In addition to the speaker itself, wrapped cleanly in a protective foam film, users will find a Micro USB to USB-A Cable and an auxiliary cable. A black cord-style lanyard is pre-installed on the speaker, allowing an additional easy way to lug the gadget around.

For documentation, Tribit includes a straightforward manual explaining how to get started and what the two LED lights along the top of the device indicate. Two cards highlighting the company’s more humanitarian side are in the box too. Those inform buyers that their purchase has helped support the aid organization UNICEF USA and showing how buyers can further support the group.

The pill-shaped design of Tribit’s MaxSound Plus is going to be familiar to just about anybody that has used a wireless Bluetooth speaker before but looks can be somewhat deceiving. Tribit incorporates the use of slightly soft-touch matte polycarbonates here compared to many competitors, allowing for a comfortable in-hand feel while maintaining the rugged feel. That wraps around the entire device with the exception of the port covering, which is made of a more rubbery material.

The speaker grate is metal at the front, while slots covering the second 45mm passive bass radiator at the back are cut-out of the original material rather than residing under a grate.

Looking at MaxSound Plus from the back, a slot along the left-hand edge just next to the port cover has been included for the pre-installed lanyard. That’s made of a similarly premium-feeling black cord as opposed to the rubber that’s typically used.

Four rubbery feet along the bottom ensure that the device doesn’t slip around and seem to perform well as a buffer to prevent any vibrations whatsoever from transferring to the surface the speaker is placed on. 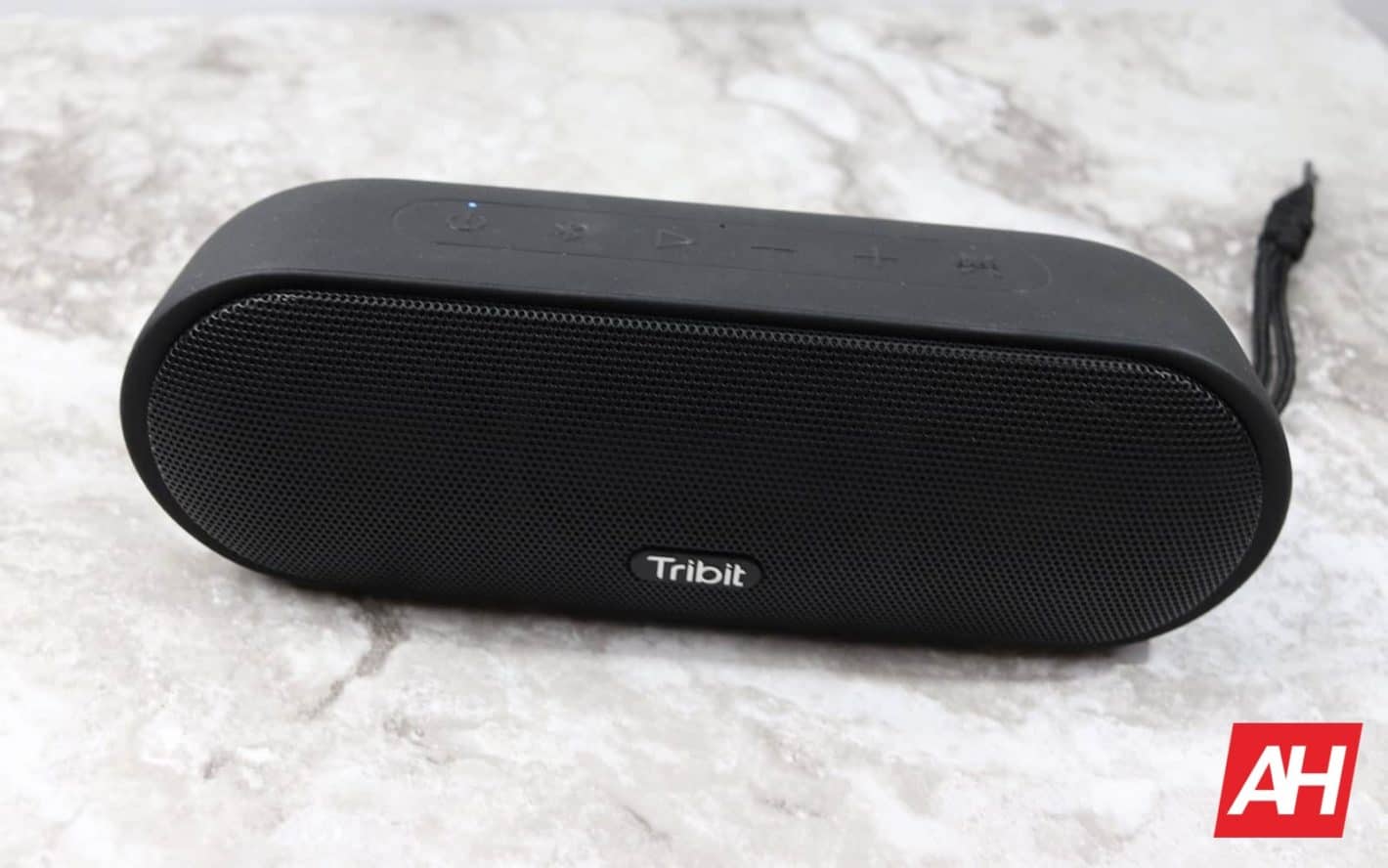 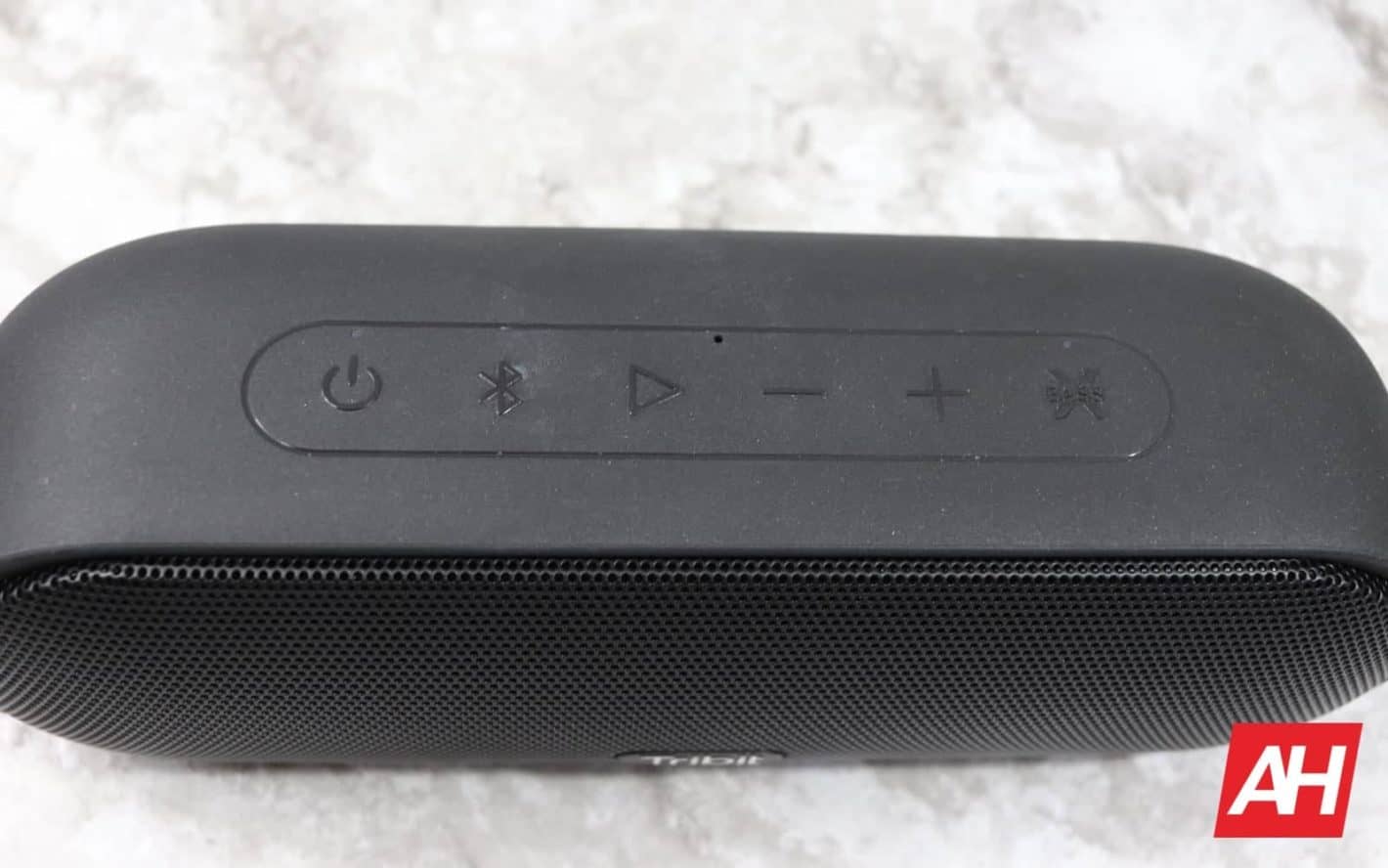 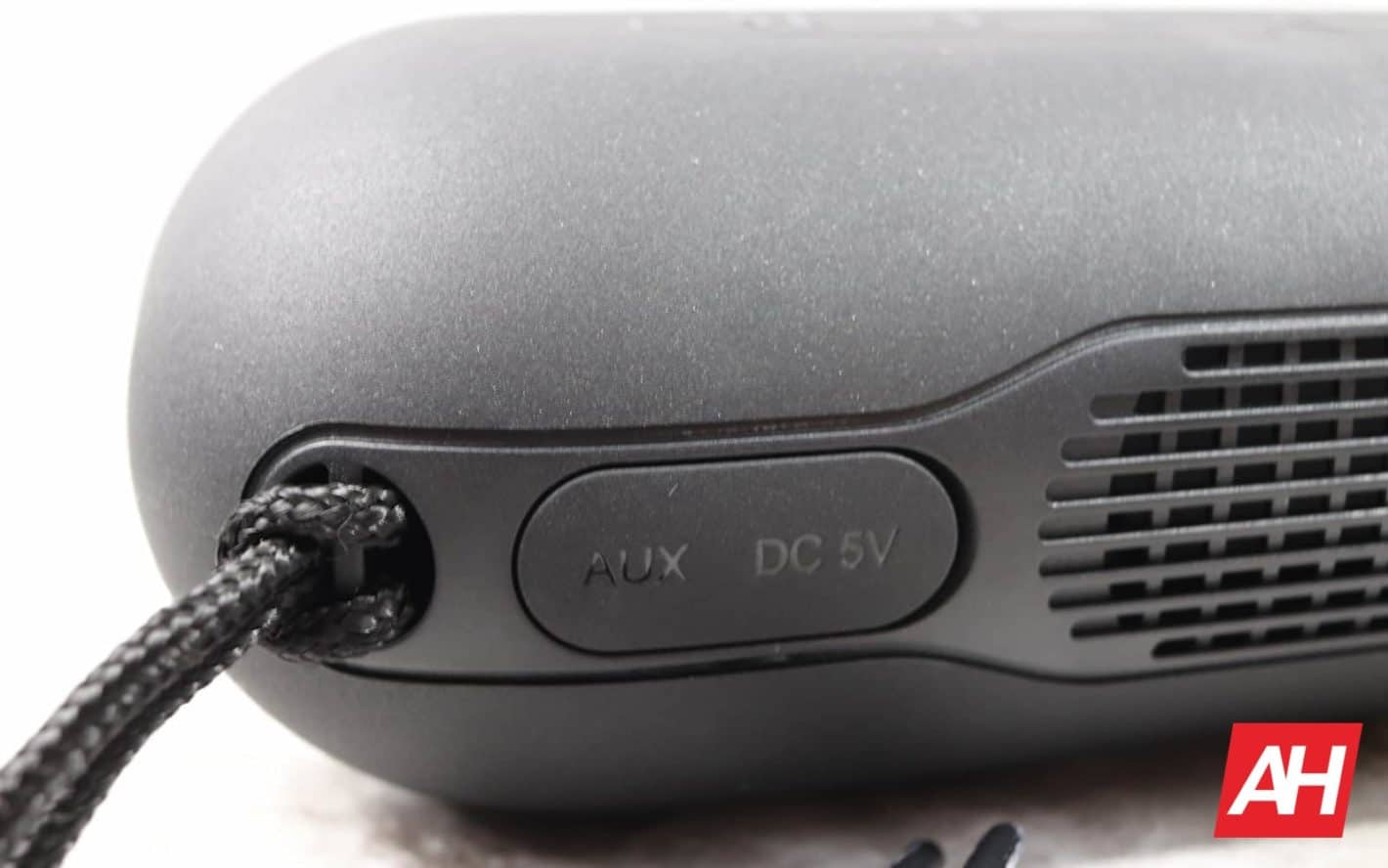 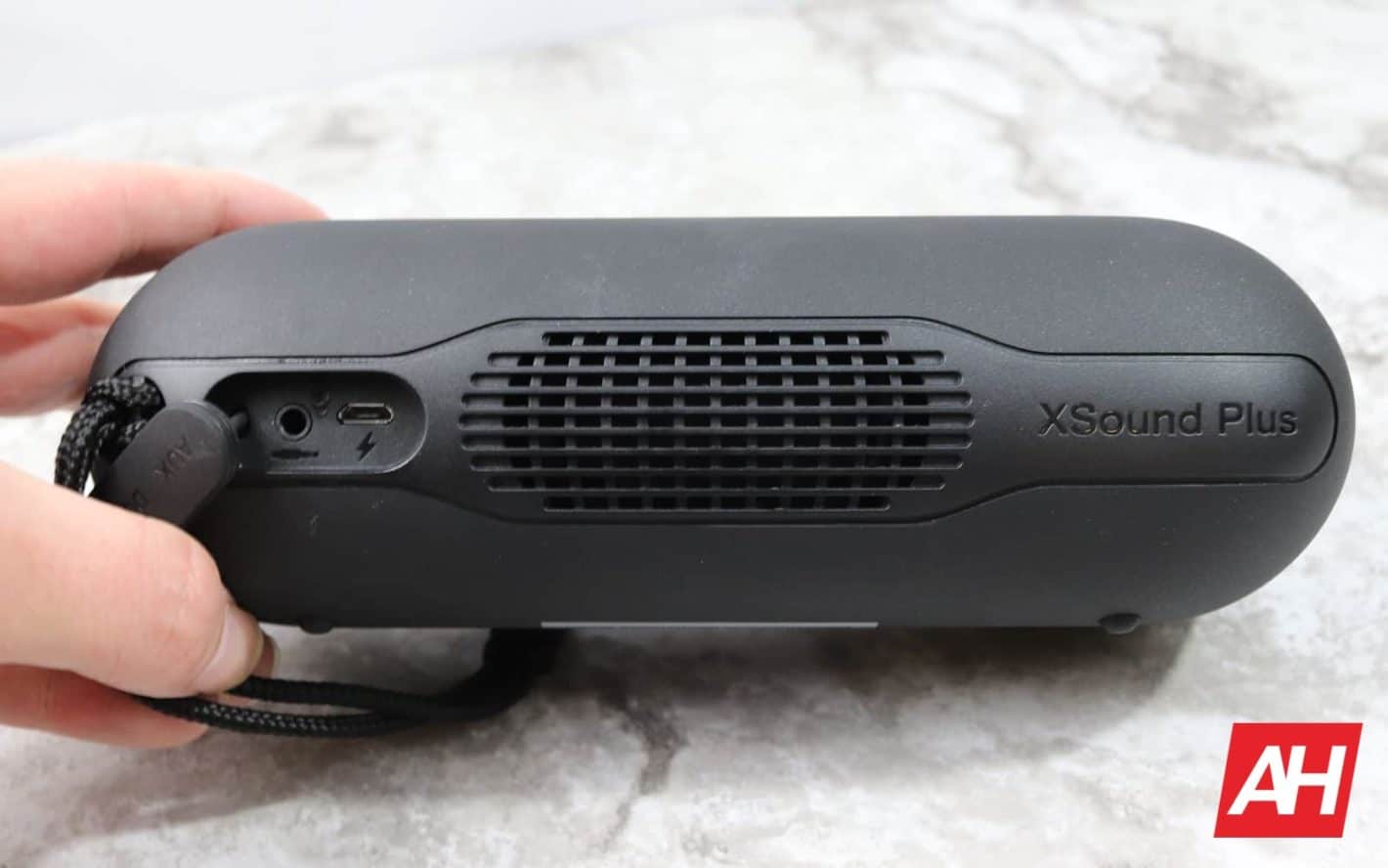 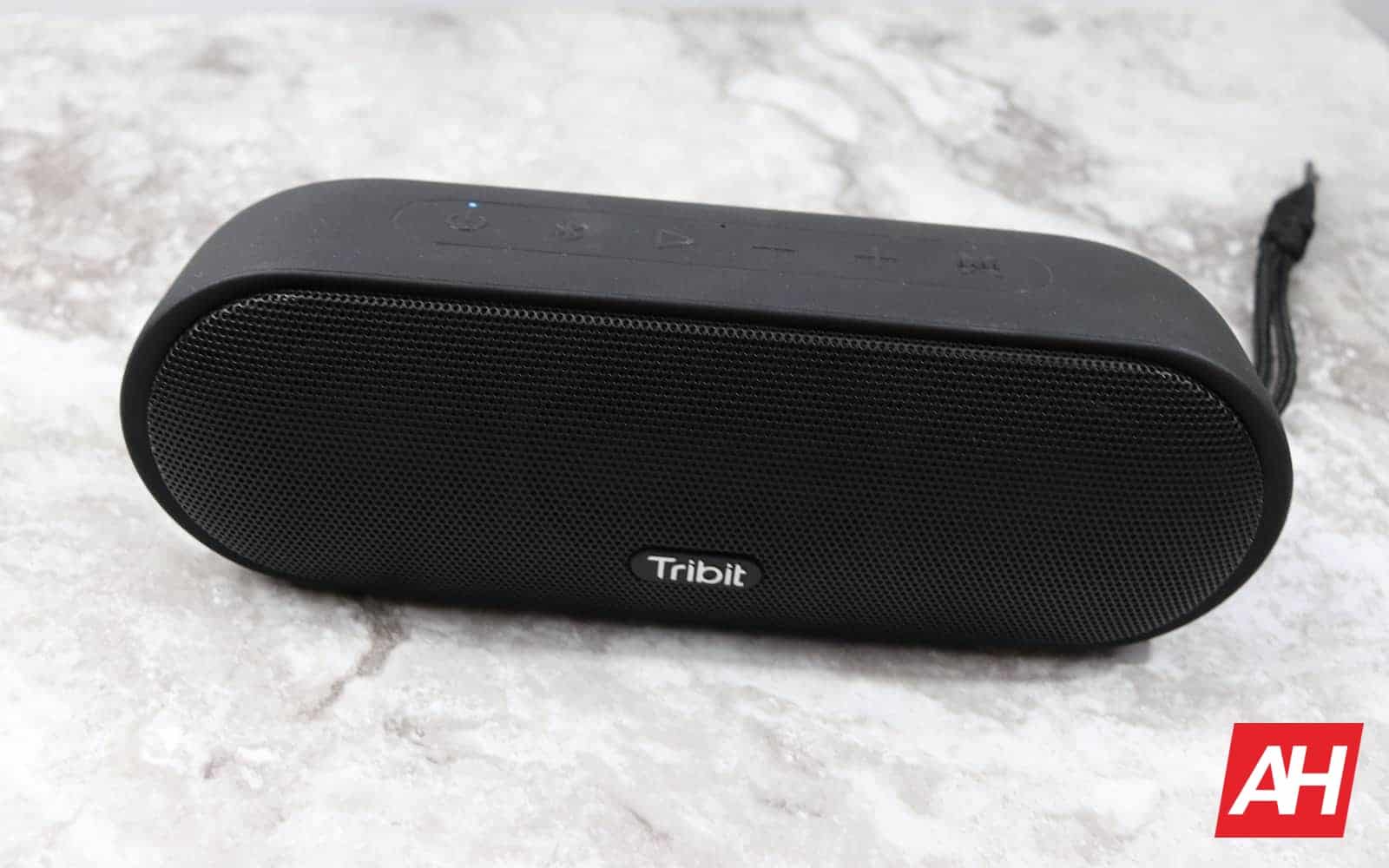 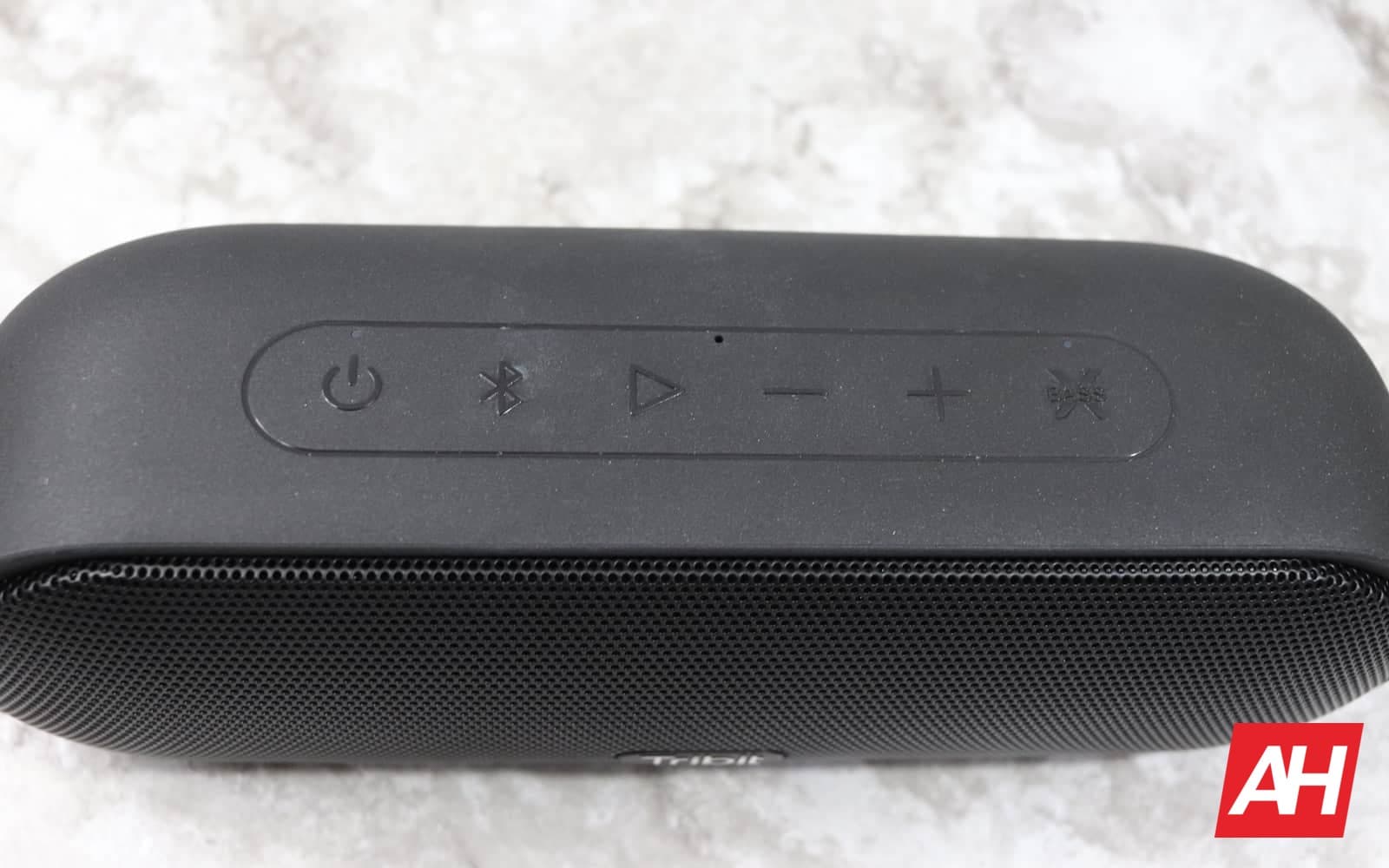 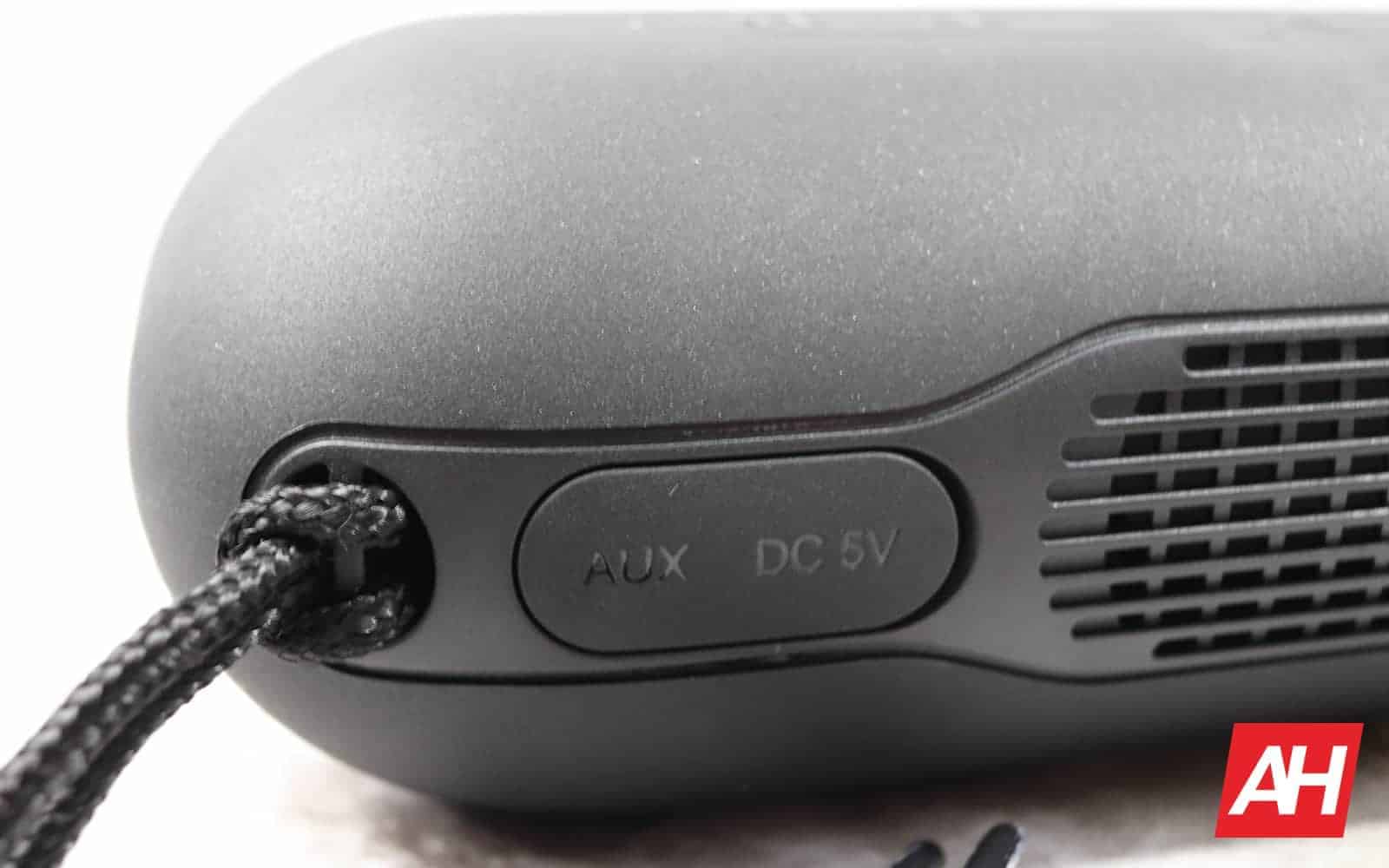 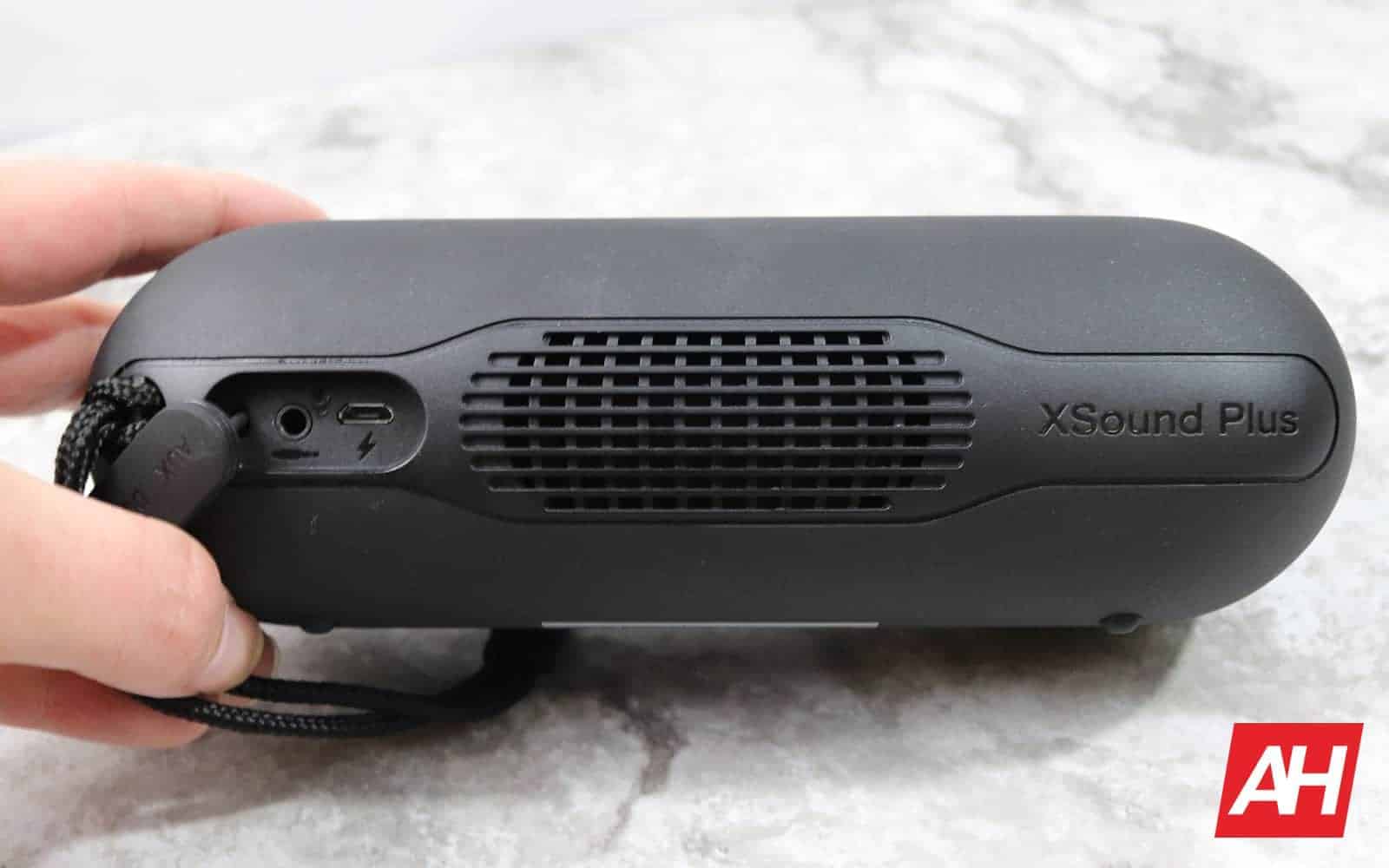 Underneath the port cover, there is both a micro USB and 3.5mm audio jack. The first of those is, obviously, used for charging up the gadget while the second is meant for audio input. The flap covering the ports isn’t too obnoxious to keep out of the way while plugging or unplugging cables — which is a nice change from some competing devices — but doesn’t feel cheaply build either.

More directly, the port cover isn’t likely to tear off any time soon but allows easy access to ports while simultaneously ensuring the IPX7 water resistance of the speaker.

The ports themselves are likewise, snug-fitting and don’t wiggle at all when cables are plugged in. So those should last a long time.

Keys arranged along the top of the MaxSound Plus from Tribit include a power, Bluetooth, Play/Pause, Volume controls, and XBass buttons. The power and XBass buttons have dedicated LEDs. For the former, that indicates charging, power state, and connectivity status while the latter indicates whether extra bass from the passive radiators has been activated. The power LED shows three distinct colors for easy information at a glance.

The multifunction play button can also be pressed twice to skip forward, three times to skip back, pressed to answer or end calls, and long-pressed to reject a call or activate voice dialing.

Listening to music or other audio effectively has two modes with the MaxSound Plus Bluetooth speaker and either of those excels at what it seems designed to do.

The default mode for this speaker is to provide playback with the company’s proprietary XBass technology turned off. In that mode, audio playback is clean and crisp with bass tones evenly balanced alongside other output. That’s not to say the sound is flat because it isn’t. Instead, the speaker seems to put out audio that almost exactly matches the audio’s intended levels.

Small speakers are, by their very nature, intuitively incapable of providing any bump or punch. Even the very best small-form speakers in the world consistently fail in that regard. The same is simply not true with the MaxSound Plus and, unlike many other speakers, it doesn’t matter whether it’s been placed on a specific surface either. A transference of vibration to secondary surfaces doesn’t seem to be how this one at all.

Instead, turning XBass on unleashes a true monster of a listening device and gives an entirely new completely new meaning to what’s possible in such a small form factor. In songs where the bass is heavy in the back-beat, it thumps in an extremely satisfying way. For those where a bass guitar or other low-tuned instrument is played, those sounds ring through clearly and powerfully. It is, in a word, exceptional.

None of that takes away from the overall balance of the audio either. Although XBass definitely brings bass forward, other tones still push through as clearly as they should — thanks in large part to the speaker’s near-matching of frequencies audible to the average human ear. Distortion is kept completely non-existent even in the most intensive songs at the highest volume possible.

Despite the relatively low cost to purchase the Tribit MaxSound Plus, audio quality is genuinely approaching that of some of the very best speakers that can be had. The only thing missing is a range of lower frequencies, since the average ear can hear those at around 20Hz to 20KHz — while some gadgets will go as low as 5Hz or as high as 33KHz.

Regardless, the output here is well above average and even at the highest volumes the speaker somehow doesn’t manage to sound overwhelming even in small quarters.

Connectivity is generally the shortest portion of a review on a Bluetooth speaker since they all tend to feature similar versions of Bluetooth and work almost identically. That actually turns out to be another area where Tribit’s MaxSound Plus performs above par though.

Tribit hasn’t specified which version of Bluetooth it is running on its newest speaker but the range is listed at 100ft. Interestingly enough, that claim seems to ring through and range stays amazing even when metal siding and doors are between the device and the source. Even at over 50-feet in that ordinarily completely disruptive scenario, skipping and cut-out are at a bare minimum — we saw maybe three instances in over 10-minutes of playback.

Better still, Tribit doesn’t just include an aux port on its speaker, it includes an aux cable. So as long as the source device has a 3.5mm audio jack to drive sound out, the MaxSound Plus will accommodate. There doesn’t seem to be much change in quality but it will offer a more secure connection for those using the speaker in high-interference environments. That’s without having to spend an extra $5 to $15 on a speaker cable.

Battery life appears to be as advertised as long as the volume is kept under around 60-percent. It shouldn’t stray too far from the 20-hour mark even turned up but even at 18-hours or 16-hours, that outperforms many competitors without sacrificing quality in audio.

Charging may cause at least some complaints since that can take up to four hours. it can be used while charging but that will diminish its ruggedization since the ports won’t be sealed away throughout. Having said that, the battery life will be more than adequate to suit just about any use.

As seems to be the case with almost all Tribit products, this is simply going to be a rock-solid buy for the vast majority of people at just under $60. Despite its low price point and small size, the MaxSound Plus delivers punchy deep bass, loud but high-quality intonation across the supported frequencies, long-range playback, extra smartphone or speaker functionality, and a classic look.

Put simply, Tribit’s MaxSound Plus builds on the company’s formula for great-sounding audio, finessing out even more bass with some control over how balanced or heavy-hitting that media is to the ear. At the current price, and Tribit does frequently run promotions and sales, the new Bluetooth speakers seems like it should cost well over $100 and possibly even more than that.

All of that is coupled with durability and battery that can keep audio flowing through an entire day without having to stop because of a little rain.

Anybody looking to buy a speaker in that price range would be doing themselves a huge disservice to overlook the Tribit MaxSound Plus.