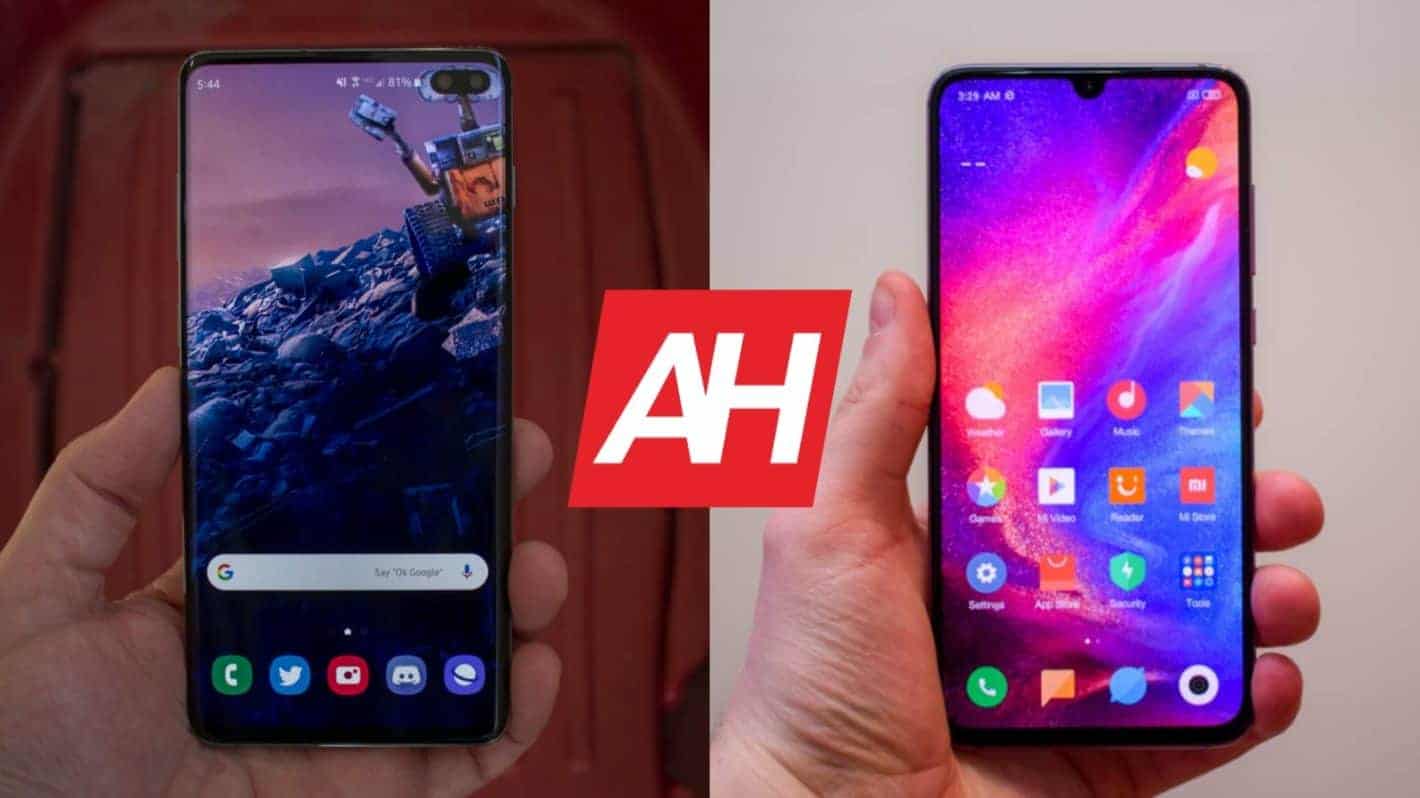 The Samsung Galaxy S10+ and Xiaomi Mi 9 are both the most powerful phones their respective companies have to offer. Both of these phones were introduced in February, and on top of being flagship-grade phones, they’re also quite similar in size and use similar build materials, which makes them kind of ideal participants for a direct comparison. The Xiaomi Mi 9 is quite a bit more affordable than the Galaxy S10+, which is something worth noting before we kick off this comparison. Having said that, we’ll start off by comparing spec sheets of the two devices, then moving to their designs and all other categories that we usually use in our smartphone comparisons.

The Samsung Galaxy S10+ and Xiaomi Mi 9 are both made out of metal and glass. Both of these phones are quite curved on the back, and both are quite slippery, which is definitely something you will want to take note of, as they’re not exactly the smallest phones in the market. The Galaxy S10+ includes Corning’s Gorilla Glass 6 on both its front and back side, while the Xiaomi Mi 9 comes with Gorilla Glass 6 front, and Gorilla Glass 5 back, which is not exactly a huge difference, if we’re being honest. These two devices are quite similar in terms of size, and that goes for length, width, and thickness… not to mention that they almost weigh the same.

The two phones do look quite different, and using them feels quite different as well. The Galaxy S10+ features a curved display on the front, so it’s a bit more difficult to grab properly compared to the Xiaomi Mi 9, which includes a regular, flat display. The Galaxy S10+ includes a dual display cutout in the top-right corner, in order to accommodate two front-facing cameras, while Xiaomi opted to include a tiny notch on the Mi 9, a notch that is centered at the top of the phone’s display. Both phones feature an extremely thin “chin” below the display, and both include displays with rounded corners. It is worth noting that the Galaxy S10+ includes a 3.5mm headphone jack on the bottom, while the Mi 9 does not.

Each of the two devices includes three cameras on the back, though those cameras feature different orientation and placing. You will not notice a fingerprint scanner on either of the two devices, as those units are located below the display on both phones. Both of these phones look really great, if we’re being honest, and we can not really pick one in terms of the design. It all depends if you prefer flat or curved displays, and whether you want a dual display cutout, or a tiny notch on your phone, as these two devices have slightly different approaches. This category is a tie in our book.

The Galaxy S10+’s Dynamic AMOLED panel is the very first out there to support HDR10+ content, which is currently limited, but if you’re looking for that sort of thing, and future proofing, the Galaxy S10+ may be the way to go. The Xiaomi Mi 9, on the other hand, does support HDR10, which is what the vast majority of you will be more than happy enough. Both displays are really great, the Mi 9’s panel is one of the best fullHD+ panels that we’ve seen, but it cannot measure up with the Galaxy S10+’s display, so we’ll give this category to Samsung.

Performance on the Galaxy S10+ and Mi 9 is exactly what you’d expect… it’s great. These two phones are both fueled by the Snapdragon 855 (though the Galaxy S10+ comes in the Exynos 9820 variant in some markets), which is Qualcomm’s most powerful mobile chip, and in combination with plenty of RAM that both of these phones offer, and software optimizations, we really do not have anything to complain about. Both phones are extremely fast in day-to-day scenarios, no matter if you play a game, multitask between apps, consume multimedia content, take pictures, or doing something else entirely. Hiccups are pretty much not a thing on either of these two phones, at least for the time being.

The two devices do come with considerably different software, though. Underneath it all lies Android 9 Pie, Google’s latest version of Android, but an Android overlay on top is different in comparison. The Galaxy S10+ comes with One UI, while the Mi 9 includes Xiaomi’s MIUI 10 skin. One UI is Samsung’s brand new Android overlay with focus on one-handed use, and it’s actually really good, the very best Samsung ever released, and it does seem to be quite optimized. MIUI 10 has been around for a while, and is definitely the best Xiaomi ever created, not to mention that it’s quite optimized. It will be interesting to see how will the two phones compare after half a year, or a year, in terms of performance, but for the time being, they’re both amazing.

Battery life is one of the most important aspects when it comes to smartphones, what good is a phone which cannot last you a full day, right? Well, you’ll be glad to know that both of these phones will get you through a full day, at least most of you, as there are always those of you who push phones extremely hard on a daily basis, and can drain pretty much every device. The Galaxy S10+ does come with a much larger battery, a 4,100mAh unit, compared to the Mi 9’s 3,300mAh battery, so you’d assume that it simply obliterates the Mi 9 in terms of battery life… well, not really.

Truth be said, Samsung does have an upper hand on the Mi 9 when it comes to endurance, but not by a margin you may assume. Both devices will get you north of 5 hours of screen on time, at least it did in our case, while getting over 6 hours of screen on time was also possible, but all of that vastly depends on your usage. The Xiaomi Mi 9 offers much faster charging than the Galaxy S10+, though, with 27W fast charging compared to Galaxy S10+’s 15W charging.

Both the Galaxy S10+ and Mi 9 offer three cameras on the back, though those setups are considerably different. Both devices ship with ultrawide and telephoto secondary lenses, while their main sensors are quite different. The Galaxy S10 includes a 12-megapixel main camera with variable aperture, while the Mi 9 sports a 48-megapixel main camera, Sony’s new sensor. One major difference between the two phones is that the Mi 9 does not offer OIS (Optical Image Stabilization), but you’d be surprised how much that doesn’t matter in terms of performance. When it comes to video, the Mi 9’s EIS (Electronic Image Stabilization) is doing a great job at stabilizing footage, while the phone performs really well in low light as well.

The Samsung Galaxy S10+ and Xiaomi Mi 9 are both great devices, there’s no doubt about that, though the Galaxy S10+ takes this comparison in the great scheme of things. The phone offers a superior display, can last longer on a single charge, and has a slight advantage in the camera department. The Galaxy S10+ also managed to retain the 3.5mm headphone jack, compared to the Xiaomi Mi 9, not to mention that it comes with stereo speakers (the second one is included in the phone’s earpiece). This one goes to the Galaxy S10+, but the Mi 9 is much more affordable than the Galaxy S10+, and if you’re not willing to pay up for the Galaxy S10+, and are still looking for a great flagship, the Mi 9 is a great option.