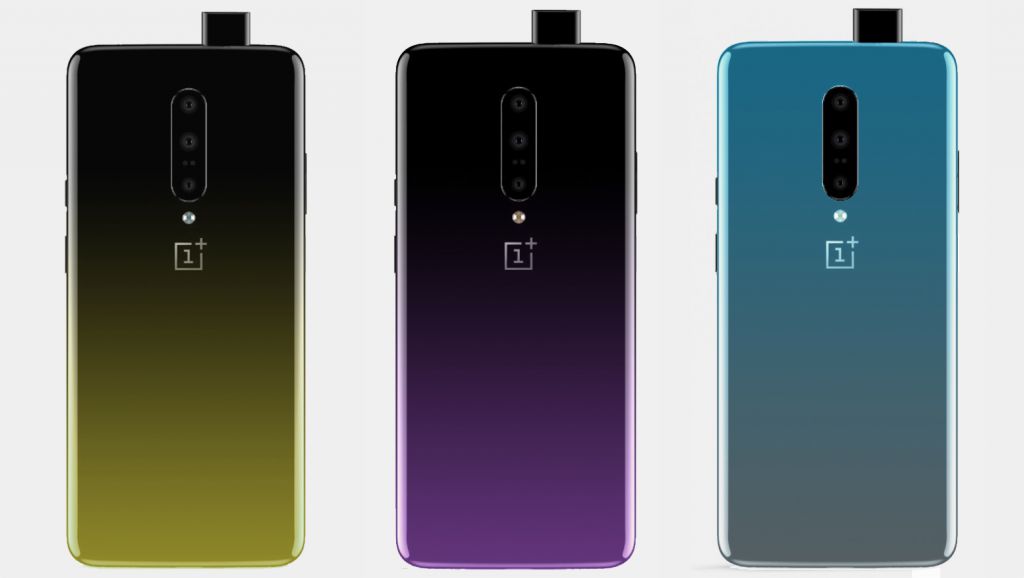 According to a report by Tiger Mobiles (via T3), a smartphone comparison website, the OnePlus 7 will arrive in some new color options, compared to previous models. Those three color variants are Black Yellow, Black Purple, and Cyan Gray, and the source even provided renders of all three variants. We’re not sure if these are leaked renders, or created by a third party source based on the provided info, but you can check them out regardless.

As you can see, all three color variants are gradient, as their names may suggest. All of these phones will be identical on the front, but not on the back. As you can see, the Black Yellow and Black Purple will include black color on the top of their back sides, while yellow and purple colors will be included down below, respectively. The Cyan Gray, on the other hand, will combine cyan color on the top, and gray on the bottom.

If you’ve seen the Thunder Purple variant of the OnePlus 6T, you already know what to expect out of the Black Purple OnePlus 7, and it’s even possible that this color will be officially called Thunder Purple. In fact, it’s possible that OnePlus will have a special name for each of these color variants, that is actually the expected outcome.

The OnePlus 7 is expected to arrive in May, one year after the OnePlus 6 arrived, but the company still did not confirm its launch date or timeframe. At the moment, all possibilities are open, but chances are we’re looking at a May launch.

The OnePlus 7 did leak quite a few times thus far, and thanks to 360 degree renders that surfaced a while back, we pretty much know what to expect when it comes to the phone’s design. If those renders are accurate, OnePlus has opted not to use a display notch or a display hole in the OnePlus 7, and instead offer a pop-up selfie camera. It’s hard to argue that this is a better choice in terms of looks, but some people may have issues accepting moving parts that are required for a pop-up camera, it’s all a matter of personal preference.

The OnePlus 7 will be fueled by the Snapdragon 855 64-bit octa-core processor, and it will not support 5G, but OnePlus is planning to release a separate phone which will come with 5G support. The device is also rumored to include a 6.5-inch fullHD+ Optic AMOLED display, and if that ends up being the case, the phone will probably be a bit larger than the OnePlus 6T, but close to its dimensions, as OnePlus probably will not utilize a 21:9 display, but utilize a 19:9 or 19.5:9 display aspect ratio.

The OnePlus 7 will arrive in several variants, and its lowest RAM storage will be either 6GB or 8GB, while 10GB or 12GB RAM variants are also a possibility, at least in for of a special edition handset that will launch later on. The phone will probably pack in a large battery on the inside, while OnePlus’ Warp Charge will be included in the package as well, same as on the OnePlus 6T. Wireless charging almost certainly will not be a part of the package, same goes for a 3.5mm headphone jack.