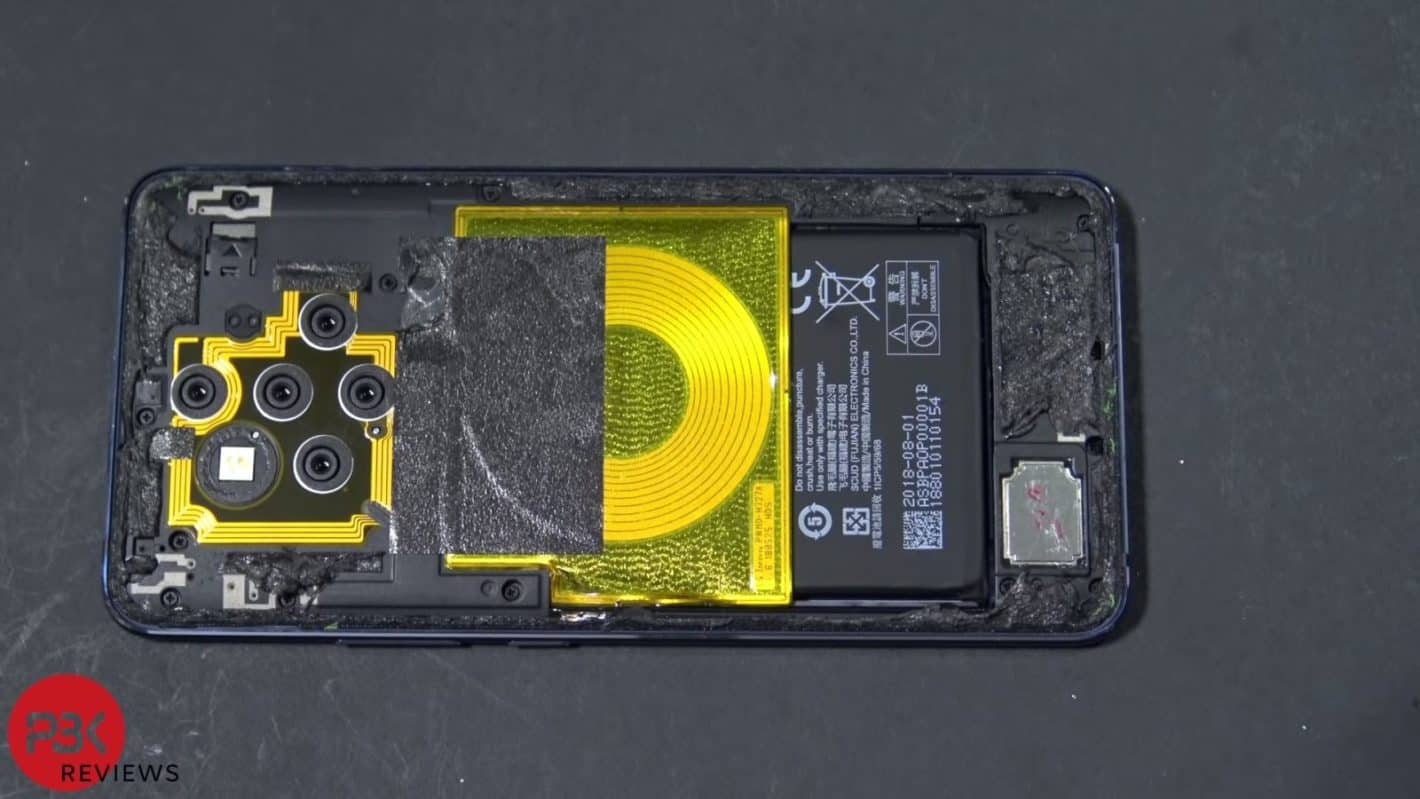 The Nokia 9 PureView was recently featured in a repair guide video published on YouTube by PBKreviews and discovered by GizmoChina. In two words, the phone has been described by the source as “well sealed” which could be another way of saying it’s not easy to repair. The glass sandwich design required the use of adhesive in the phone’s construction, but there are also plenty of screws hiding inside.

The glass sandwich design makes it so that the only way of getting inside the Nokia 9 PureView is by removing the back panel. This is similar to other glass-wrapped devices in the premium category, including the Samsung Galaxy S10 which was featured in a previous teardown video.

There is a lot of adhesive holding the back plate stuck to the phone so detaching it can be achieved with the help of a heat gun, plastic prying tools, and a suction cup.

The battery becomes accessible after a few more minutes of disassembly, but it appears that the OEM chose not to include a pull tab for easier reparability. Once again, prying tools will have to combat the adhesive and detach the unit from the frame.

An interesting point to take from the video is that the five-camera array sits on its own circuit board which can be detached from the main board. Likewise, the phone contains a copper vapor chamber contributing to heat dissipation from the Snapdragon 845 chipset.

What’s odd about the vapor chamber is the way it travels from the chipset towards the battery, raising some questions about the way it dissipates heat. But the component is attached to the metal mid-frame which itself should provide additional cooling.

Overall the Nokia 9 PureView appears to make good use of the internal space and the components seem to be packed together neatly. But the general issue with these glass sandwich designs affects the Nokia 9 PureView as well. Specifically, the display is also stuck to the frame with an adhesive, and removing the panel without damaging it is very difficult or oftentimes impossible. This step was left out from the repair guide video, presumably because the source may have wanted to avoid damaging the device.

The Nokia 9 PureView was unveiled by HMD Global last month and has a launch retail price of $699. As yet it is the only flagship phone offered by the OEM but HMD is expected to put a greater emphasis on flagships this year so additional top-tier models will likely be unveiled over the coming months. So far the Nokia brand has performed well under HMD’s umbrella but in December the OEM admitted that the Nokia 8 Sirocco flagship performed below expectations and is aiming for an improvement in high-end market performance this year.