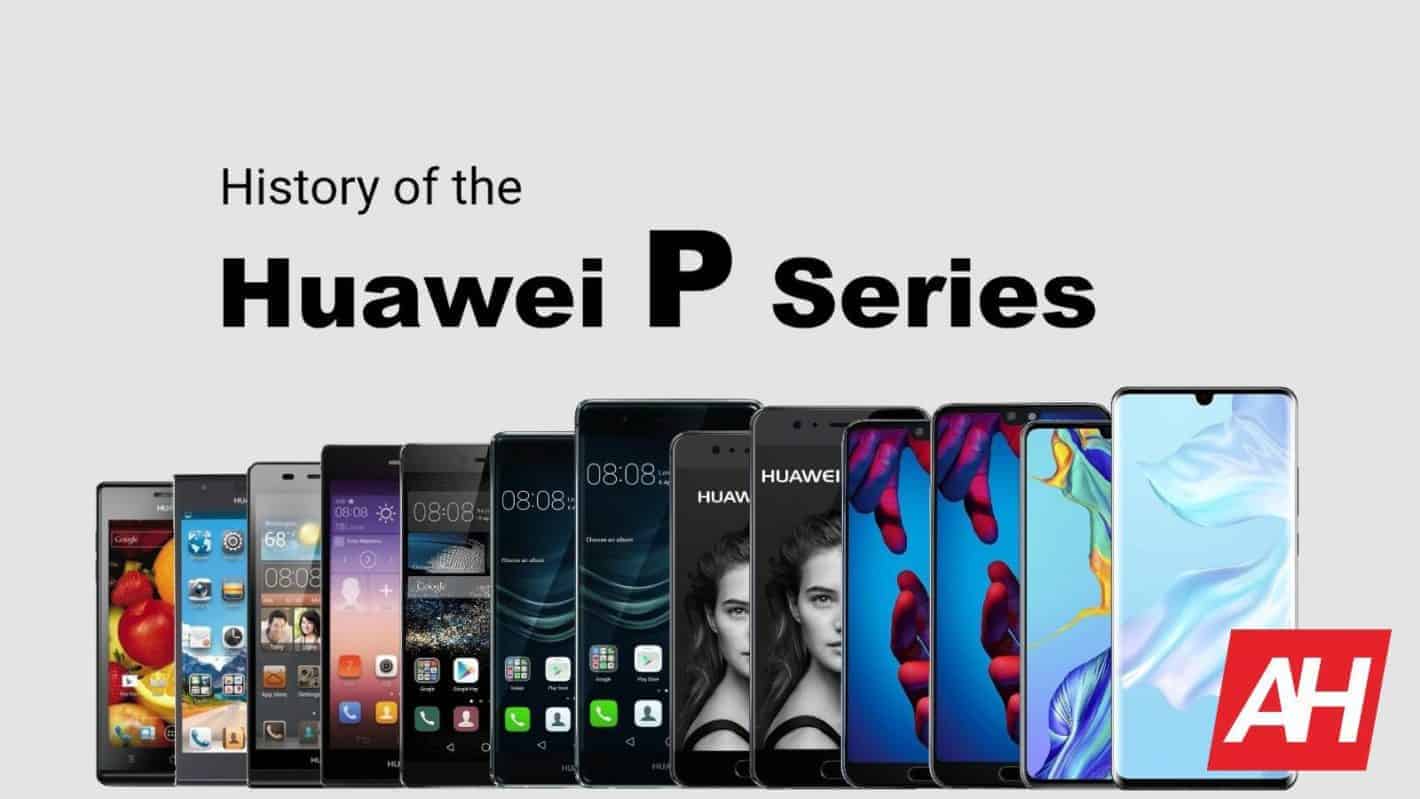 Huawei had released quite a few smartphones as part of its flagship "P series", though that lineup changed quite a bit over the years, even the name of it changed at one point. The story began way back in 2012, when the first "Ascend P1" smartphone arrived as the company's flagship. Huawei also decided to release the "Mate" series of smartphones at one point in time, and those phones managed to become Huawei's second lineup of flagship devices, but the P series is arguably still the best-known series the company is selling.

In this article, we will take a look at the company's whole P series of devices (flagships only), from the very beginning, to what the company is offering today. The article will be updated as new versions of Huawei's P series devices get released. So, if you're interested in knowing more about the company's flagships, read on.

The Huawei Ascend P1 is the company's very first P series flagship. This device was introduced back in January 2012, though it took it a couple of months to reach the market, Huawei started selling it in May. The device has pretty thick bezels, as every phone did back then, and it sports three capacitive keys below the display. The Huawei Ascend P1 ships with Android 4.0 Ice Cream Sandwich out of the box, though it was later upgraded to Android 4.2 Jelly Bean.

This handset features a 4.3-inch 960 x 540 Super AMOLED display, and it packs in 1GB of RAM and 4GB of expandable storage. The phone is fueled by the TI OMAP 4460 dual-core processor, and it sports a single camera on the back, an 8-megapixel unit. A 1.3-megapixel selfie camera is also included in the package, and the device also includes a 1,670mAh battery which is not removable.

The Huawei Ascend P2 became official in February 2013, while it was made available by the company two months later, in April. The device comes with a set of capacitive keys, same as its predecessor, while this model actually sports a removable battery. The Huawei Ascend P2 ships with Android 4.1.2 Jelly Bean out of the box, while the company's very own skin comes pre-installed on top of it, EMUI 1.6.

The Huawei Ascend P2 includes a dedicated camera shutter on the right side, while the phone features a 4.7-inch HD (1280 x 720) IPS LCD display. This managed to surprise quite a few people, as an OLED panel was expected. The phone is fueled by the Huawei K3V2 quad-core processor, and a 13-megapixel camera is placed on the back of the phone. The device includeds a 2,420mAh battery, and it supports 4G LTE connectivity.

For some reason, Huawei opted to skip the Ascend P3, P4, and P5 brandings, and jumps straight to the Ascend P6. The Huawei Ascend P6 was introduced in June 2013, and it was made available that very same month. The device includes notably thinner bezels than its predecessors, while it replaced capacitive buttons with on-screen ones. The phone was actually quite sleek-looking when it launched, and it managed to intrigued people mainly due to its design.

The Huawei Ascend P6 ships with Android 4.2.2 Jelly Bean, and Huawei's EMUI 1.6 skin comes pre-installed on the device. The last official update that the phone received was Android 4.4.2 KitKat (with EMUI 3.0), while the device sports a 4.7-inch HD (1280 x 720) IPS LCD display. The phone is fueled by the Huawei K3V2 quad-core processor, and it includes 2GB of RAM, along with 8GB / 16GB of storage. An 8-megapixel camera is included on its back, while a non-removable 2,000mAh battery is also a part of the package.

The Huawei Ascend P7 is the last flagship from the company to sport the "Ascend" branding. This handset was announced in May of 2014, and was made available a month later. The phone actually somewhat resembles the Ascend P6, it sports Huawei's branding below the display, and it comes with on-screen buttons. The phone is made out of metal and glass, actually. This was the company's very first flagship to sport a fullHD (1920 x 1080) display, and that display measures 5-inches (IPS LCD panel).

Android 4.4.2 KitKat comes pre-installed on the Ascend P7, while the phone got upgraded to 5.1.1 Lollipop. All versions of Android that ran on this device came with Huawei's Emotion UI (EMUI) skin. The phone is fueled by the Kirin 910T quad-core processor, while the device includes 2GB of RAM and 16GB of expandable storage. A 13-megapixel camera is placed on the back of this smartphone, while a non-removable 2,500mAh battery is a part of the package as well.

The Huawei P8 is the very first flagship from the company not to sport the "Ascend" branding, as Huawei opted to ditch it completely prior to this phone's launch. The Huawei P8 is a considerably different-looking phone to the Ascend P7, the device is made out of metal, and it actually looks really nice. The phone was announced in April 2015, and it became available not long after that. The Huawei P8 includes on-screen buttons, and considerably thinner bezels than its predecessor.

The device came with Android 4.4.2 KitKat with the company's EMUI skin, while the latest update it received was Android 6.0 Marshmallow, at least as far as official updates are concerned. The device features a 5.2-inch full HD (1920 x 1080) IPS LCD display, while it includes 3GB of RAM and 16GB / 64GB of expandable storage. The Kirin 930 octa-core processor fuels the Huawei P8, and this is the very first Huawei flagship to include an octa-core chip. A 13-megapixel camera with OIS is also a part of the package, as is a 2,680mAh non-removable battery.

Huawei had introduced two flagships as part of its P9 series, the Huawei P9 and P9 Plus. Both of these phones were announced in May 2016, and both of them are made out of metal. The Huawei P9 and P9 Plus are the first phones from the company to sport two rear-facing cameras, and also the very first flagships to include fingerprint scanners. Each of these two devices has a fingerprint scanner on the back, while Huawei's branding is present below the display of each phone. The two devices look identical, but are different in terms of size.

Both devices ship with Android 6.0 Marshmallow and Huawei's EMUI skin, while the last update they received brought Android 7.0 Nougat to the table. The Huawei P9 features a 5.2-inch fullHD LCD display, while the P9 Plus includes a 5.5-inch full HD Super AMOLED panel. The Huawei P9 arrived in 3GB / 4GB RAM variants, while the P9 Plus got released in a 4GB RAM option only. Leica's camera lenses are included on both phones, and these two phones are the first Huawei devices with Leica's lenses.

The Huawei P10 series of smartphones was announced in February 2017. The company introduced two phones as part of this flagship series, the P10 and P10 Plus. These two phones share the same design, though they are different in terms of size, the same as the P9 and P9 Plus. The two phones include two cameras on the back, and this time around, Huawei opted to include front-facing fingerprint scanners which are placed below the display, and they double as home keys. The two phones also sport two capacitive keys, on each side of that home button. The Huawei P10 and P10 Plus are made out of metal.

The Huawei P10 comes with a 5.1-inch full HD LCD display, while the P10 Plus includes a 5.5-inch QHD LCD panel, and is the very first flagship from the company to sport a QHD display. Huawei's very own Kirin 960 SoC fuels both of these devices, and that is a 64-bit octa-core processor. The Huawei P10 comes with 4GB of RAM, while the P10 Plus got announced in both 4GB and 6GB RAM variants. 12 and 20-megapixel cameras are placed on the back of both devices, and Leica's lenses are a part of the offering, yet again. Android 7.0 Nougat comes pre-installed on these two phones, along with EMUI, while Android 8.0 Oreo is the last update these two phones received.

Same as with the P9 and P10 series, Huawei opted to introduce two P20 flagships, the P20 and P20 Pro. These two phones were introduced in March 2018, and were made available in April. Both devices include a display notch, and are almost identical in terms of the design, but have different camera counts. The Huawei P20 arrived with two rear-facing cameras, while the P20 Pro includes three cameras on the back. Leica's lenses are a part of the offering yet again, and both of these devices ship with a front-facing fingerprint scanner which is included below the display. The Huawei P20 and P20 Pro are made out of metal and glass.

Android 8.1 Oreo comes pre-installed on both of these phones, while both got updated to Android 9 Pie. The Huawei P20 includes a 5.8-inch full HD+ (2240 x 1080) LCD display, while the P20 Pro sports a 6.1-inch full HD+ AMOLED panel. Both phones are fueled by the Kirin 970 64-bit octa-core processor, while neither of the two phones offers a microSD card expansion. The Huawei P20 ships with 4GB of RAM, while the P20 Pro includes 6GB or 8GB of RAM depending on the variant. Both devices offer fast battery charging, and non-removable batteries.

Huawei had introduced two flagship smartphones as part of the P30 series, the Huawei P30 and P30 Pro. These two phones were announced in March 2019 in Paris, and even though they're quite similar in terms of the design, the two phones are actually considerably different overall. The Huawei P30 is smaller and it comes with a flat display, while the P30 Pro includes a curved display. Both devices come with fullHD+ OLED panels, though.

The Huawei P30 features a 6.1-inch display, 6GB of RAM and 128GB of storage. The Huawei P30 Pro, on the other hand, includes a 6.47-inch panel, 6GB / 8GB of RAM and 128GB / 256GB / 512GB of storage. Huawei's Kirin 980 64-bit octa-core processor fuels both devices, while these two phones come with 3,650mAh and 4,200mAh batteries, respectively. Android 9 Pie comes pre-installed on both devices, while Huawei's Emotion UI (EMUI) Android overlay sits on top of it. These two phones are the first out there to sport a periscope-style camera system, even though their camera setups are somewhat different in comparison.