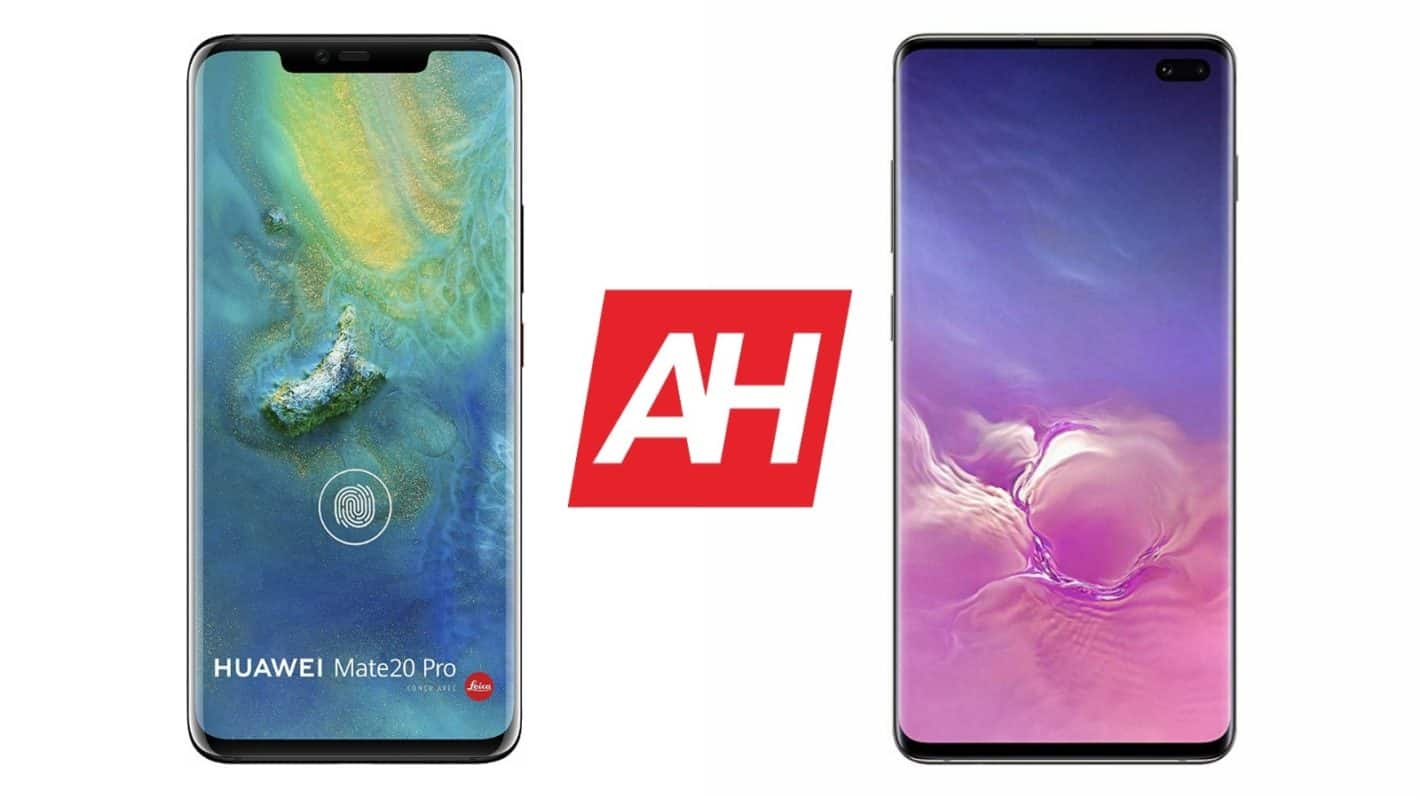 The Huawei Mate 20 Pro has been around for quite some time now, it was announced back in October last year, but it’s still considered to be one of the best smartphones around. The Galaxy S10+, on the other hand, is Samsung’s brand new flagship, and it competes in the same market segment as the Mate 20 Pro, thus we’ve decided to compare the two, while we’re waiting for the Huawei P30 series to become official. These two phones are also quite similar in size and design, in addition to competing in the same market segment… so, let’s see how the two compare.

The Huawei Mate 20 Pro and Samsung Galaxy S10+ are somewhat similar in terms of the design. Both devices are made out of metal and glass, while both of them offer curved displays, and are also curved on the back as well. Both phones include a thin “chin” below the display, but they are somewhat different on the front, as the Huawei Mate 20 Pro comes with a rather wide notch, while the Galaxy S10+ includes camera holes in the top-right corner of the display.

Camera arrangement on the back of these devices is also different, as the Mate 20 Pro’s camera are stacked in two rows, while the Galaxy S10+’s are aligned horizontally. The two devices include almost identical displays, in terms of size, and yet the Mate 20 Pro is narrower as it comes with a narrower display aspect ratio. That fact, plus the coating that Huawei applied on the back of the Mate 20 Pro, makes it feel safer to hold, even though the Galaxy S10+ also doesn’t seem to be as slippery as other glass-made phones in the market.

This is really a matter of personal preference, but we’ll give this round to the Galaxy S10+, as its camera holes seem to be less of a distraction than the wide notch on the Mate 20 Pro, the phone looks a bit more modern because of it. If you're not bothered by that notch, and are looking for a narrower device, on the other hand, the Mate 20 Pro is a great choice in that regard.

Most people won’t see much difference between the two panels, though for those of you who are looking for the best of the best, the Galaxy S10+ does pull ahead a bit. The Dynamic AMOLED display included in the Galaxy S10+ is quite probably the best display on a smartphone to date, it’s extremely sharp, includes vibrant colors, and is just a joy to use, in basically every way. The Mate 20 Pro’s display is not really that far behind, quite the contrary, but we have to give an edge to the Galaxy S10+ in this regard.

The Mate 20 Pro and Galaxy S10+ are both extremely capable phones when it comes to sheer day-to-day performance, which is to be expected considering these are flagship devices. The Huawei Mate 20 Pro is fueled by the 7nm Kirin 980 64-bit octa-core processor, while the Galaxy S10+ comes in two SoC variants (market-dependent), it’s equipped by either the 7nm Snapdragon 855 or 8nm Exynos 9820. These two chips are quite similar in terms of sheer power, and all three chips are amongst the most powerful mobile processors on the market.

Both devices come with Android 9 Pie out of the box, though pre-installed Android overlays are quite different. Huawei’s EMUI 9 came a long way in the last couple of years, while Samsung managed to make a considerable step forward with One UI. Both Android overlays feel extremely smooth at this point, and quite frankly these two phones are so similar in terms of sheer day-to-day performance across the board, that we could not decide who to give an edge to. No matter which phone you purchase, you will be extremely happy with the performance, at least for the foreseeable future.

Most of you will be more than happy with battery life on either of the two devices, although it’s safe to say that the Mate 20 Pro offers more in this regard. We still did not get a chance to fully test the Galaxy S10+’s battery life, but based on the info we’ve gathered thus far, the device is quite formidable in this regard, and trumps its siblings, though not the Mate 20 Pro. The Mate 20 Pro was able to provide us with over 7 hours of screen-on-time at the end of the day, and still have over 10-percent left on most days, which is really hard to beat.

If you dabble with the phone’s battery-saving features, on the other hand, you can get an even better battery life out of the device. The Mate 20 Pro is one of the best flagships out there when it comes to battery life, and on top of that, it comes with extremely fast 40W wired charging, compared to the Galaxy S10+’s 15W wired charging. Both devices offer 15W wireless charging, and also reverse wireless charging on top of everything. The Huawei Mate 20 Pro takes this category without a problem, not only due to sheer endurance, but due to its much faster charging as well.

As already mentioned, our Galaxy S10+ review is still not ready, but from what we’ve seen thus far, the Galaxy S10+’s camera is all that it’s cracked up to be. DxOMark is only a camera benchmark, but the site was not exactly far off what you can expect out of the Galaxy S10+. In fact, the Huawei Mate 20 Pro and Samsung Galaxy S10+ camera quality is on par, and it was nearly impossible to choose a winner here. Both devices do a stellar job in daylight, with accurate colors, no noise, and punchy images overall.

When the light goes away, Huawei’s special night mode does great, while the Galaxy S10+ actually does an admirable job when it comes to low light as well, and even fires up a special mode on its own if it feels the need to, though it does that only if it’s extremely dark. In terms of video, both phones are admirable as well, and quite frankly, if you’re looking for amazing smartphone cameras, these two devices are amongst the best out there. Not only do they do a great job in basically all conditions, but they also give you plenty of versatility due to different sensors on the back. We could not pick a winner here, so we’ll just call it a tie and move on.

As per usual, in this category, before coming to a conclusion, we actually mention some differences that were not mentioned in the previous categories, and also some features that were left out. When it comes to audio, both devices offer stereo speakers, and those speakers are actually quite great in both cases. Both devices also offer 32-bit/384kHz audio output (via headphones), but the Huawei Mate 20 Pro does not offer a 3.5mm headphone jack, unlike the Galaxy S10+.

Both devices include Bluetooth 5.0, while both phones ship with in-display fingerprint scanners, though the Galaxy S10+ offers a more advanced ultrasonic fingerprint scanner, compared to an optical one in the Huawei Mate 20 Pro. MicroSD expansion is available on both devices, up to 256GB in the Mate 20 Pro’s case, and up to 512GB as far as the Galaxy S10+ is concerned. Taking all of this into consideration, the Galaxy S10+ did win this comparison, but the Mate 20 Pro is not that far behind, so it will be interesting to see what will happen once the Huawei P30 Pro arrives later this month.