Much like the OPPO R17 Pro, HONOR has outfitted the View20 with a Time-of-Flight (TOF) camera, which is a device that effectively measures depth information based on the speed of light. HONOR is using this for more than OPPO does, including sticker emoji’s, counting food calories, body shaping, and 3D Gaming. On the surface, it appears that it might have even better hardware than the considerably more expensive Huawei Mate 20 Pro, but direct comparisons reveal why there’s such a gulf in price. While the main camera is incredibly similar in every way, including specialty modes like night mode and portrait mode, it’s the additional cameras on the Mate 20 line that make up the difference.

The HONOR View20 features only a main 48-megapixel Sony IMX586 sensor on the back, no secondary cameras for zooming in or getting wider angles. This main camera is a huge ½-inch sensor though, which is substantially larger than most other sensors, and while the physical 0.8μm pixel size is tiny, Sony’s Quad Bayer array configuration means this one can shoot 12-megapixel shots with an effective 1.6μm virtual pixel size. The 12-megapixel size is configured out of the box and generally delivers the best balance of detail and dynamic range, but you have two other options to choose from as well. 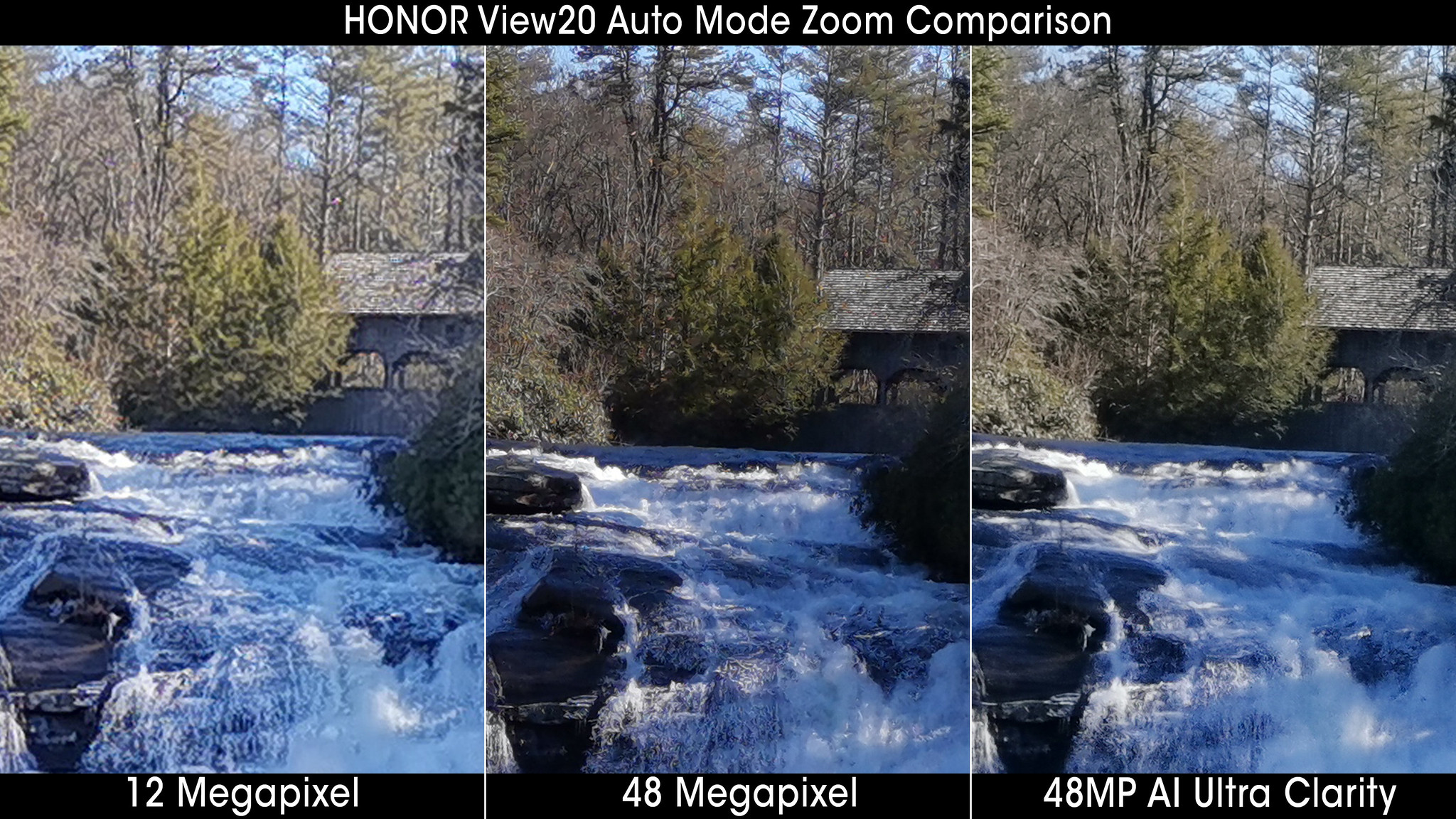 Switching to the full 48-megapixel resolution will deliver absolutely mind-blowing detail in most lighting conditions, and even delivers essentially identical detail when compared to the considerably more expensive Huawei Mate 20 Pro. The full-frame resolution carries a few disadvantages with it though: loss of dynamic range, no zooming in the viewfinder, and worse low light performance than the default 12-megapixel mode. To alleviate this, HONOR has developed what it calls an “AI Ultra Clarity” 48-megapixel mode that works similarly to night mode, taking several shots over a period of a few seconds, and combining these shots for wider dynamic range and sometimes even enhanced detail.

This is a really cool feature, and while the viewfinder reminds you that this mode will enhance well-lit scenes the best, they’ll still help lower lit scenes from time to time as well. What’s cool is that, unlike night mode, you won’t see any blur introduced into the frame if you move it during the capturing process, and this includes objects that are moving in a scene like people, for instance. Just like on Huawei’s top-end phones, changing from 12-megapixel mode to 48-megapixel mode disables digital zoom from the viewfinder, but while Huawei’s phones disable the additional cameras, there’s no secondary camera to disable on the HONOR View20. 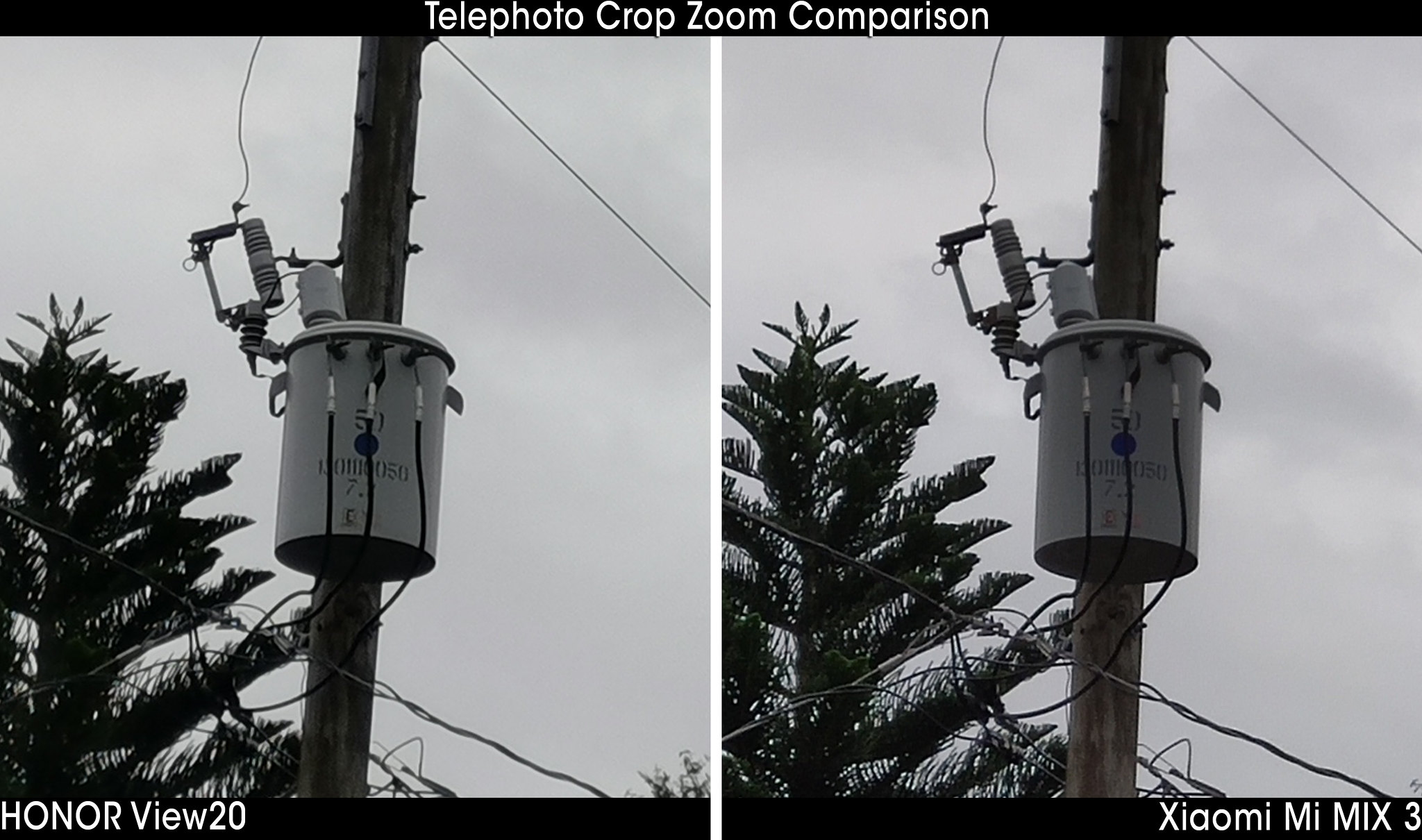 You’d be hard pressed to tell the difference in most circumstances though, especially when it comes to detail, where the View20 handily beats most other smartphones with telephoto lenses. Dynamic range is the weak point, again due to the fact that this is essentially a crop of a 48-megapixel shot, and those individual pixels are super tiny, meaning they just can’t pull in the same amount of light others can in these types of shots. It also makes the question of choosing between the 12 or 48-megapixel setting quite a bit more difficult, as leaving it on 48 megapixels will always give you the full zoom ability, but will lessen the dynamic range. 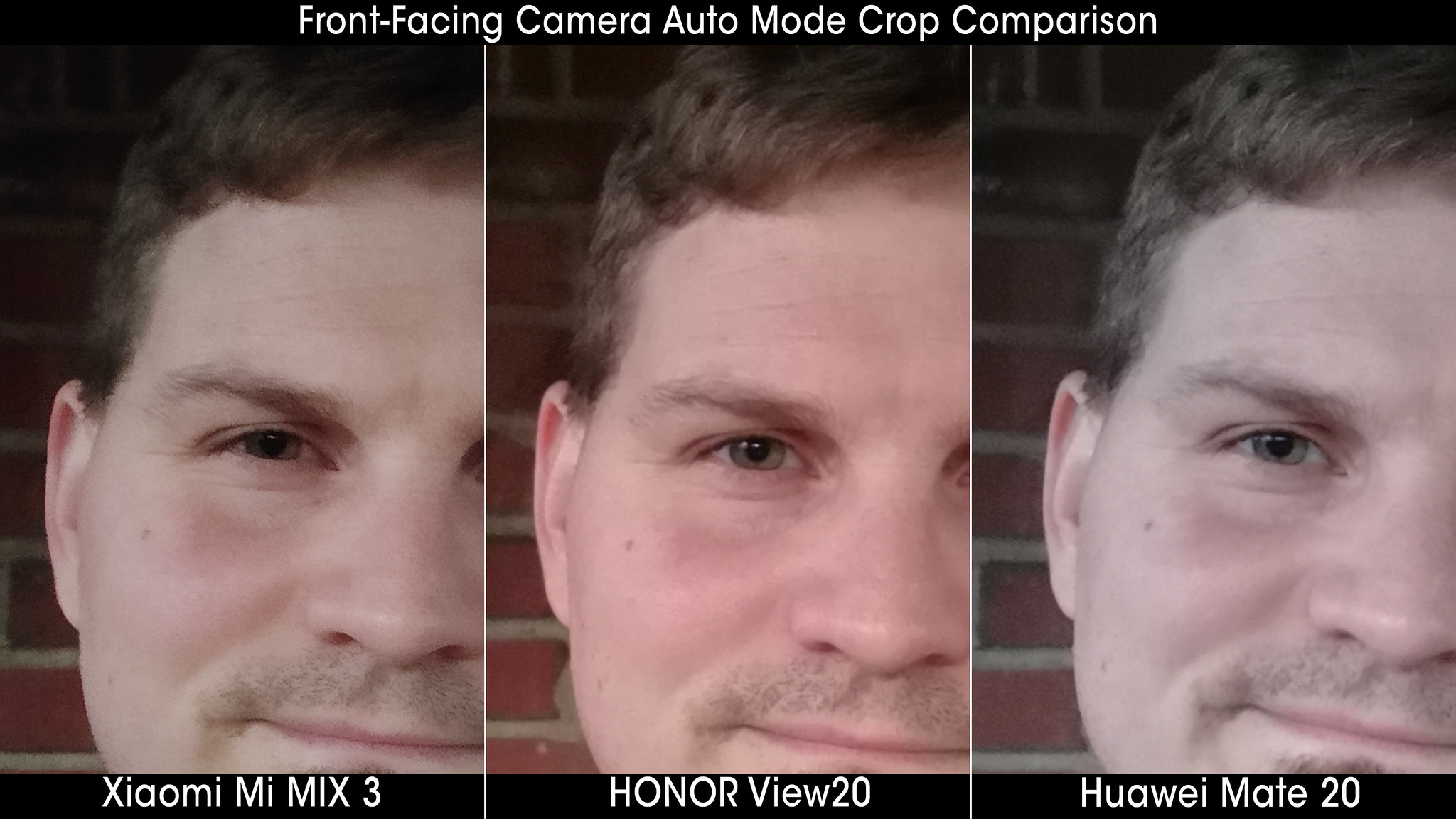 The front-facing camera is better on the HONOR View20 when compared to the Mate 20, and while it’s really only better by a hair, it’s still worth noting. This camera is clearer, brighter and just better overall when compared to Huawei’s latest, and while it’s not quite the best front-facing camera on the market, it’s definitely more than “good enough.” Something the View20 does well, in particular, is capturing moving objects without blurring them. This has been a strength of Huawei devices for a while, but the View20 seems to be even better than before.

HONOR is continuing to utilize the term “AI” throughout most of its camera experience and has continued to improve the performance and image quality of its AI-powered features since the inception of the use of this phrase. Photos taken with the AI toggle enabled will have sections of the image tweaked, such as the color of the flowers or the grass, as well as additional calculations for increased dynamic range in scenes that need it. If you do prefer the look you’ll be pleasantly surprised at how fast the dual NPU inside the Kirin 980 processor detects scenes, meaning you won’t have to wait around for them to be identified 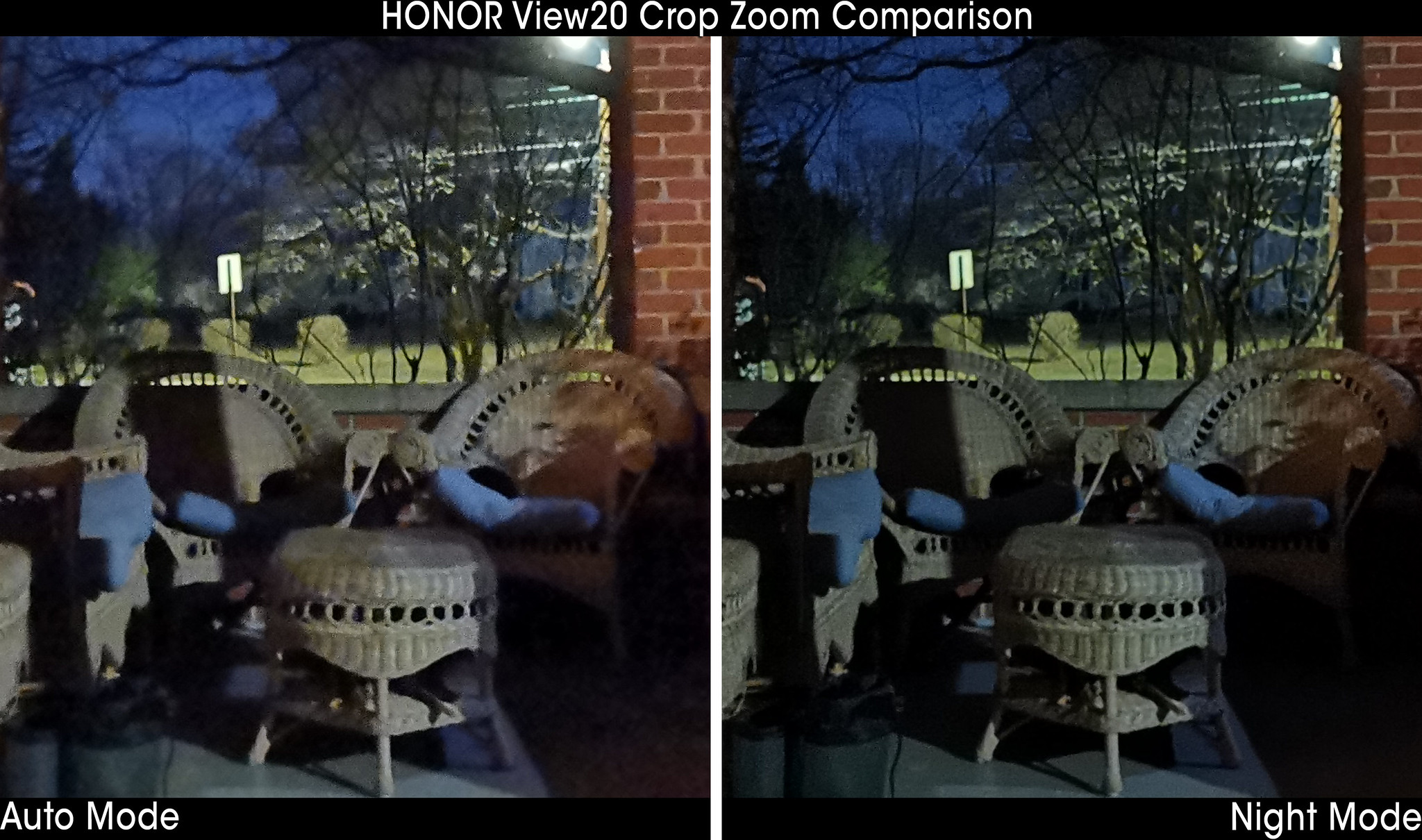 As has been the case with Huawei’s latest flagships, the HONOR View20 has an incredible auto mode in low light and represents the absolute best auto mode of any phone on the market. Simply stunning, bright imagery comes out of the camera, no matter how low the light, and you’ll find that there are times where the auto mode captures a brighter scene than the night mode will without adjusting any settings. This auto mode reproduces the most color accurate pictures in low lighting of any phone on the market, with only the Huawei Mate 20 Pro tying its accuracy. It also takes a picture in just a fraction of a second, while night mode, of course, takes several long-exposure shots over several seconds and can have hand-jitter introduced into the scene if you find yourself shaking a lot. 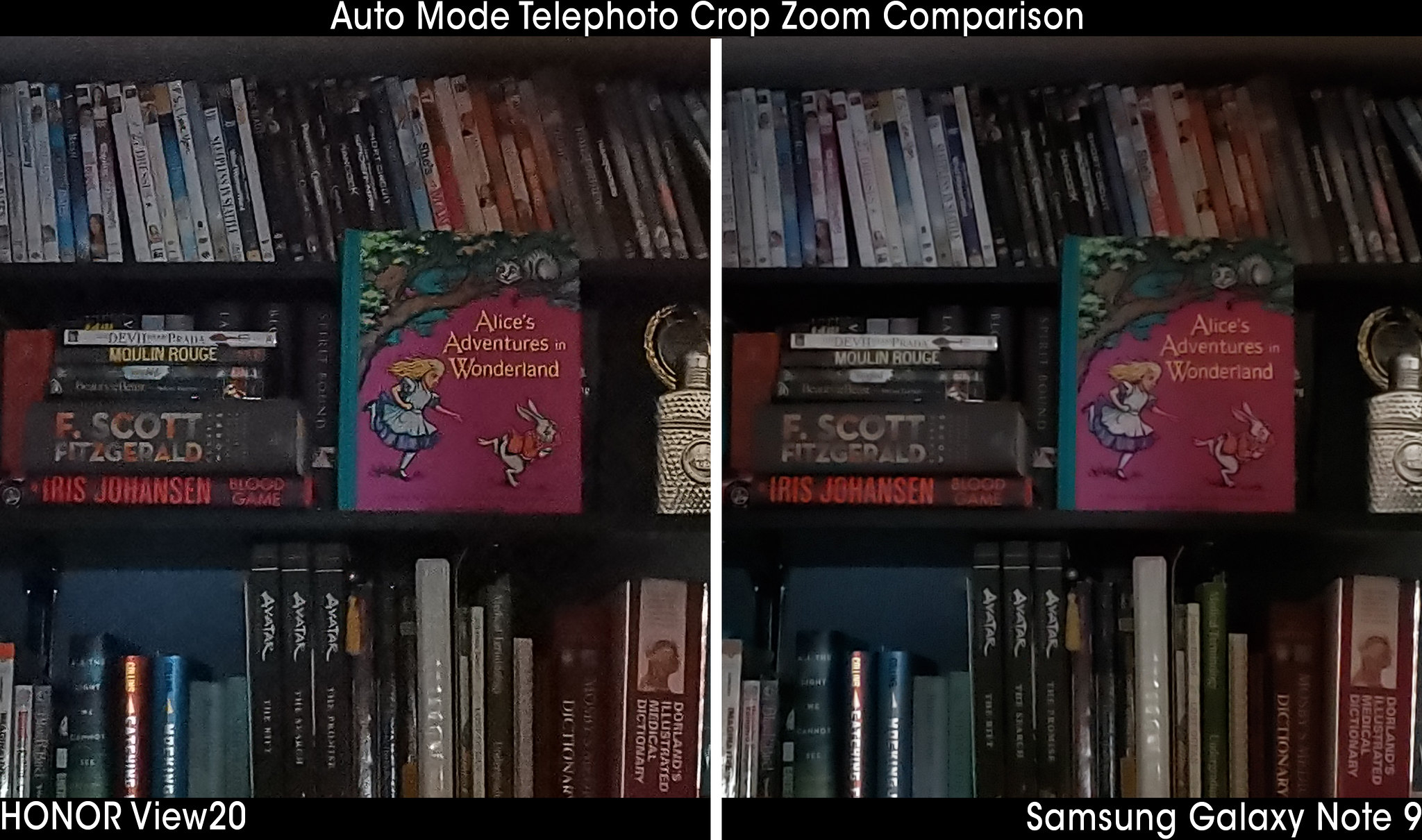 As we covered in the night mode video published recently, auto mode won’t produce the level of detail that night mode can simply because that’s not its goal. Auto mode is designed to take a super bright picture in a split second, while night mode is designed to capture as much dynamic range and detail in a low lit scene as possible. As is the case on Huawei phones, night mode has manual adjustment settings for ISO and shutter speed, meaning you can increase either setting to deliver a brighter picture in night mode, all without sacrificing detail when the phone is stabilized. 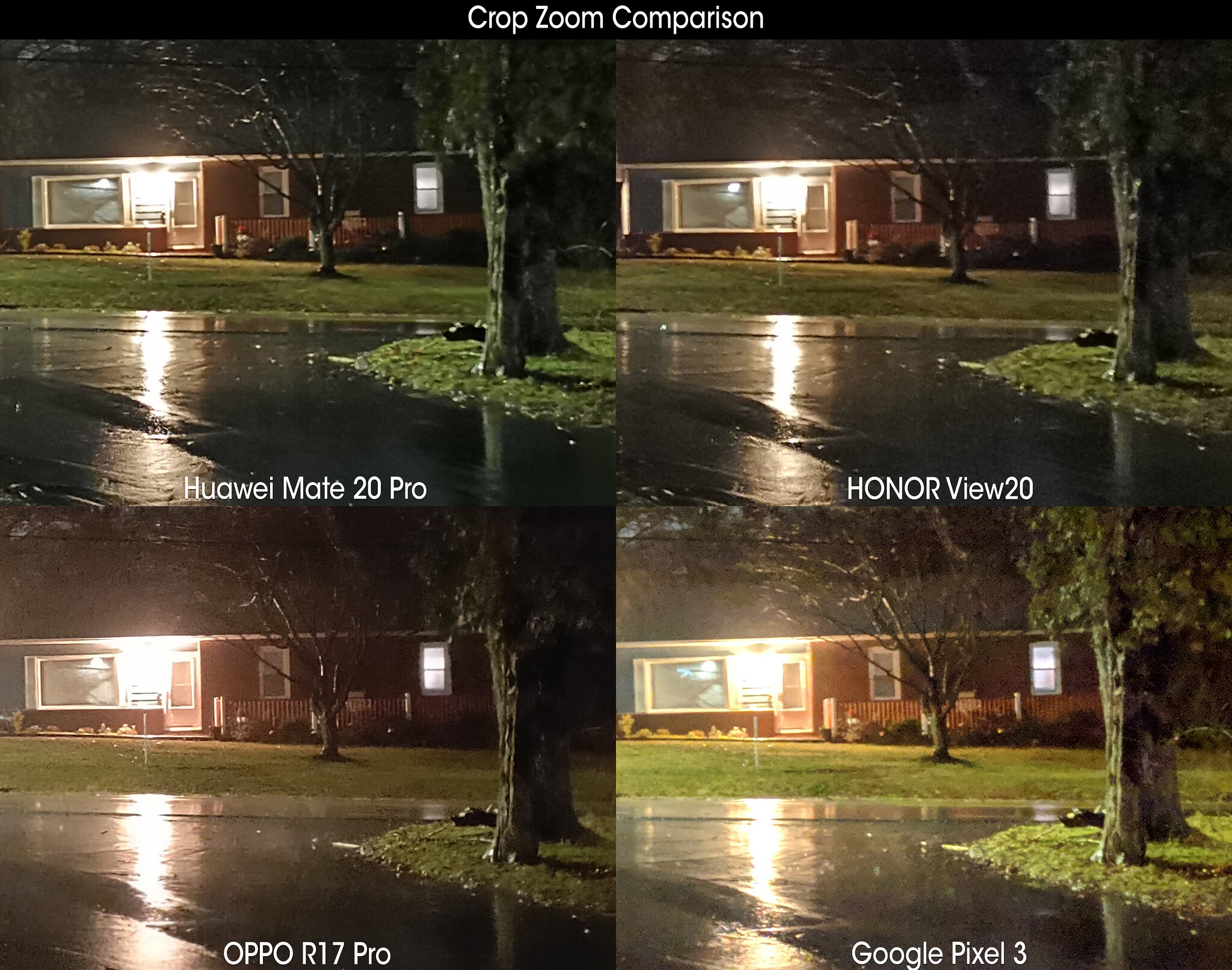 Attempting to take longer exposures while holding the phone will always result in a brighter picture but, as expected, will almost assuredly introduce hand jitter. The biggest difference between the Mate 20 Pro and the View20 is in noise reduction, where Huawei takes a more aggressive approach while HONOR seems to side more with Google on letting a bit of noise in to preserve fine detail. Check out the gallery below and that night mode video for all the samples we took.

Manual or Pro mode is exactly what you’ll find on the Mate 20, including the ultra-high ISO options and super long 30-second shutter speeds. ISO can climb as high as an astounding 102,400, which is second to none on the market and represents some of the most versatile manual photography modes on the market. The only real major thing missing is focus peaking, which makes manual focus very difficult to use. There’s no real pro or manual mode for video either, leaving only LG’s flagships with such options for folks that want more manual control over their video experience.

Portrait mode is generally good and does a solid job of edge detection but is not as good as Google’s. The View20 doesn’t feature the post-process adjustment features like Xiaomi does, meaning you’ll have to make sure your settings are correct before taking the shot, as blur depth and type cannot be adjusted after taking the picture. Portrait mode is limited to being used on human faces only and will only blur the background when a subject is detected in adequate lighting conditions. The TOF camera can be used to “sculpt” body shape based on a 10-point slider. This adjusts the face by elongating or squishing it, and it seems like the middle setting produces the most desirable results. 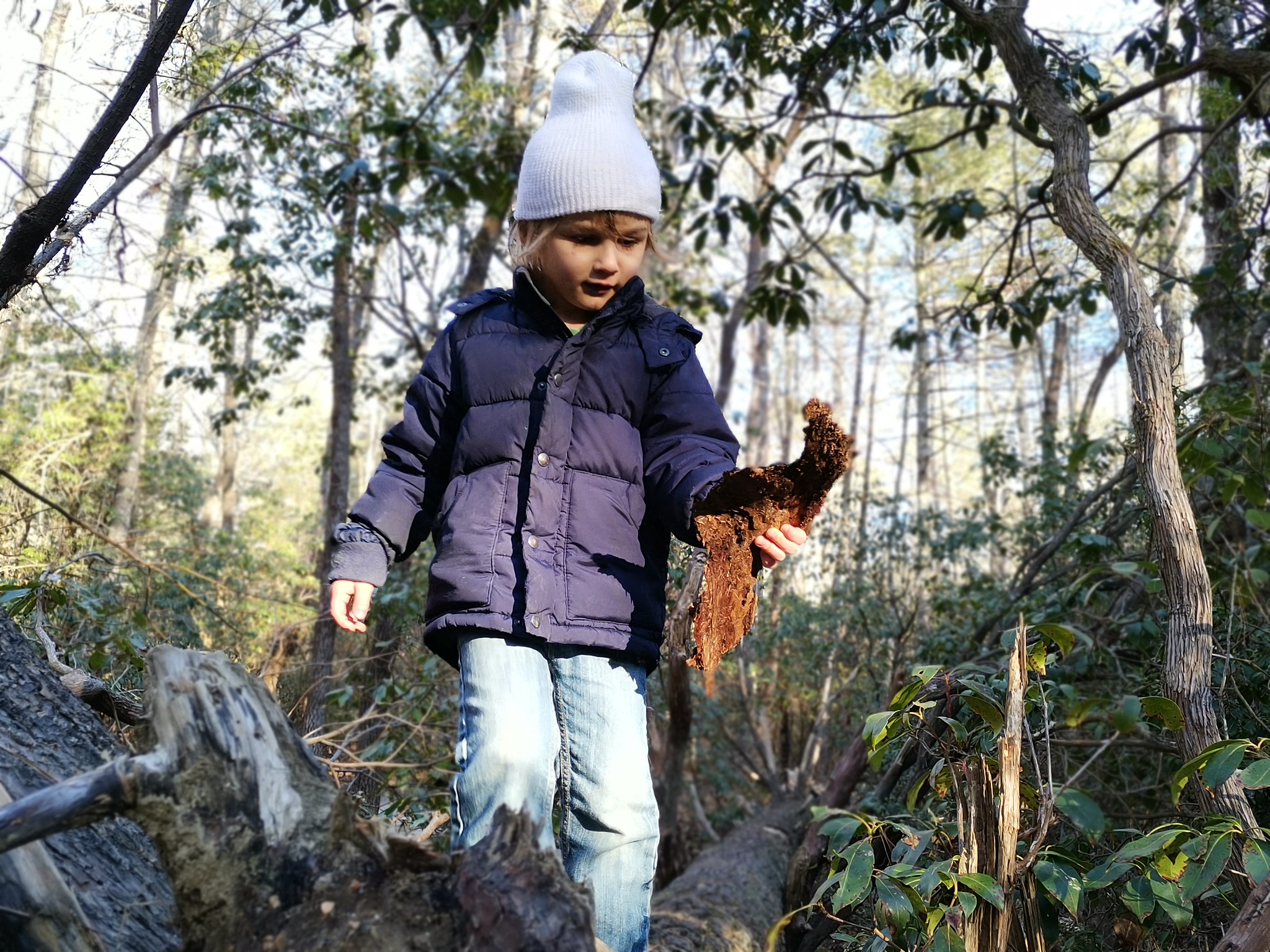 Folks looking to capture more than just people with that bokeh-style blur should use aperture mode, which works considerably better than portrait mode in most circumstances. Aperture mode creates a more true-to-life DSLR-style bokeh effect than portrait mode and works on all objects, not just when it recognizes faces. This does a super excellent job of organically blurring the background in a gradual fashion and even captures the effect well on moving objects, dramatizing a scene in a way portrait mode simply isn’t intended to do.

These effects are carried over into video mode, where Huawei’s AI Color adjustments from the Mate 20 series have made their way here as well. Framerate of video capture and the accuracy, as a whole, seems to be improved from the Mate 20, but those changes will likely make their way to the Mate 20 in a software update since this phone features an identical processor and dual NPU setup as those phones. Even that body sculpting effect can be used in video mode, showing the true power of Huawei’s Dual NPU solution inside the Kirin 980 processor. These effects are super cool and, while ultimately not practical in most situations, can be used for an impressive range of effects that otherwise would be incredibly difficult to reproduce without significant work in post-processing. All these effects are generated in real-time in the viewfinder and require no tweaking or adjustment from users. 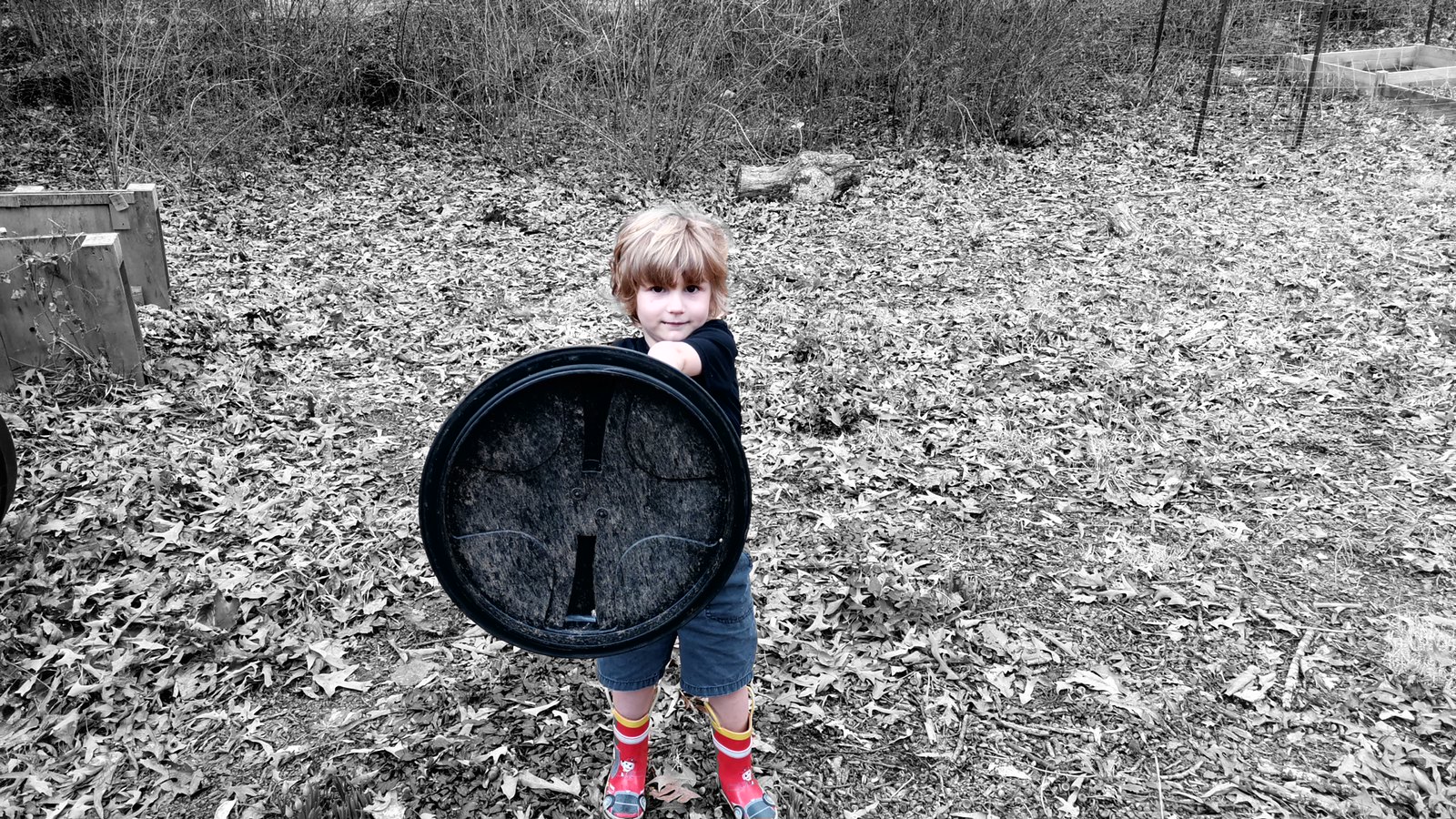 Just like the Mate 20, the View20 can only record in 4K at up to 30FPS. The image stabilization is significantly improved over the Mate 20 series though, and is not only smoother and more elegant but doesn’t feature the odd warping artifacts on the sides of the video either. The View20 also has identical super slow-motion quality as the Mate 20 series, providing 960FPS super slow-motion recording at 720p quality. The software continues to be improved on this front though and now only takes 3-4 second to save the video versus double that time on last year’s Huawei P20 Pro.

The biggest setback in video is a lack of a telephoto camera on the View20, which is incredibly obvious when placing it next to any phone that has a telephoto lens. Even the cheaper Xiaomi Mi MIX 3 does a better job of zoom detail in video than the View20, and Huawei’s Mate 20 or P20 series absolutely blow it out of the water but are, of course, more expensive devices.

HONOR has put together what could arguably be called the best camera experience on the market when it comes to providing incredible quality at a true value. HONOR has, once again, shown that a good experience isn’t one that costs an arm and a leg, but cost savings also means that some things had to make the cut. Ultimately though, the core experience is as good as you’ll find right now, and it’s only in a few areas where the View20 falls shy of the mark while excelling wildly at the vast, vast majority of every other benchmark we set.