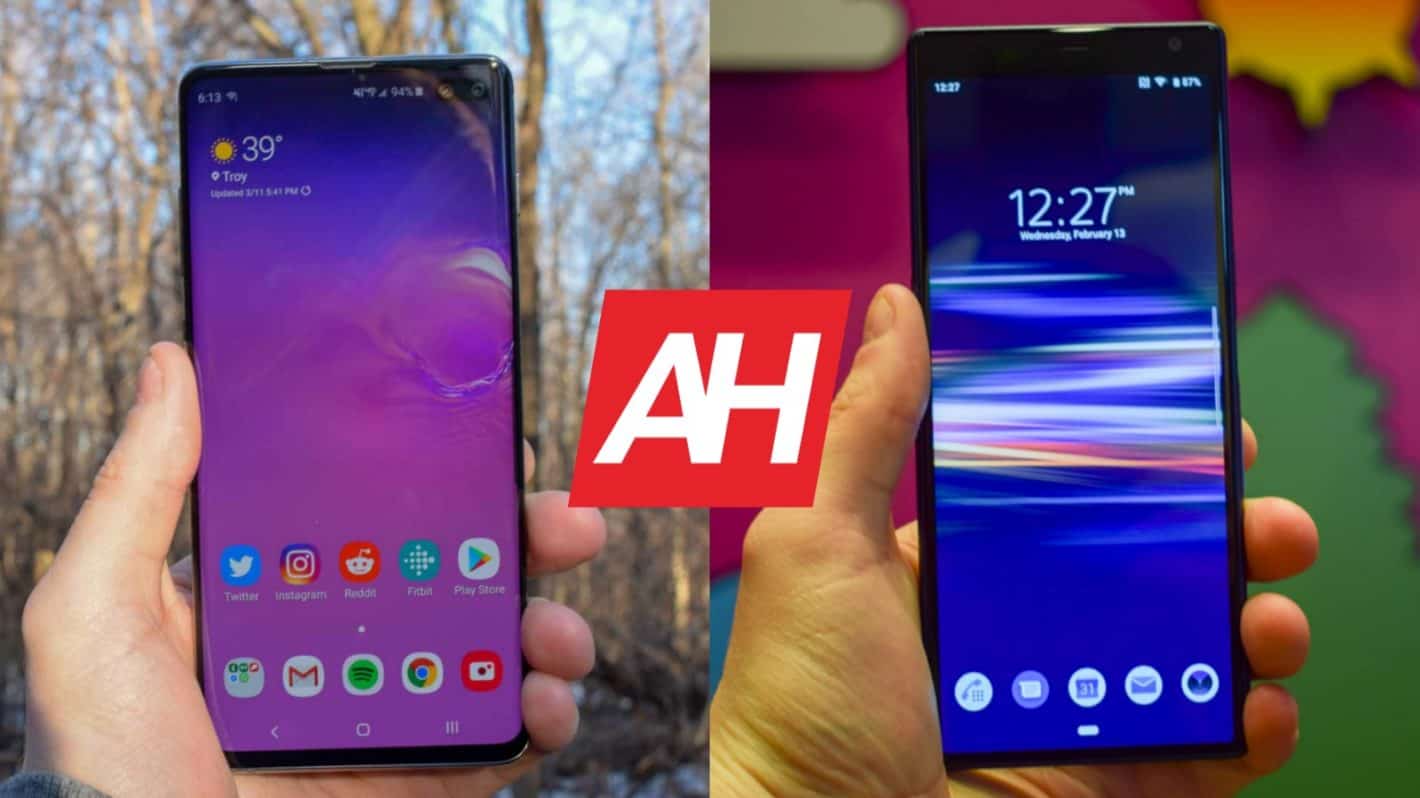 The Galaxy S10+ and Xperia 1 are brand new flagships from Samsung and Sony, respectively. The Galaxy S10+ was announced a couple of days prior to the Mobile World Congress (MWC) 2019, while Sony landed during the MWC 2019 in Barcelona. Both of these phones are extremely powerful, but they’re also quite different. At the time of writing this article, we did not really finish our reviews on either of the two phones, but we have had a chance to play around with both phones, so comparing them is the natural thing to do. We will start this comparison by listing specifications of both devices, and go from there.

They have similar display sizes, but due to the display aspect ratio, the Xperia 1 is a considerably taller smartphone, it’s taller by about 10mm, but it’s also a bit narrower than the Galaxy S10+ (72mm vs 74.1mm). The Xperia 1 is a millimeter thicker than the Galaxy S10+, and unlike the S10+ who sports an in-display fingerprint scanner, Xperia 1’s fingerprint scanner is located on the right. The phone also sports a dedicated camera button on the right, which is also something that you will probably feel when holding the phone, at least at first. The in-hand feel is considerably different due to that difference in height.

The Xperia 1 comes with thin bezels above and below the display, while the Galaxy S10+’s bezels are thinner, but the device includes a display hole, unlike the Xperia 1, which comes without a display hole or notch. This is a different comparison to make, as the two phones are quite different, but we have to say that we do prefer the design of the Galaxy S10+ despite those camera holes, as the phone is narrow enough, and yet it’s not as tall. It will take you some time to get used to the Xperia 1’s newfound tallness, that’s for sure.

These two phones are at the very top of the food chain when it comes to display quality. Both of these phones come with OLED panels, though they’re somewhat different. The Galaxy S10+ sports a QHD+ (3040 x 1440) Dynamic AMOLED display, while the Xperia 1 comes with a 4K (3840 x 1644) OLED panel. The Galaxy S10+ offers an 88.9-percent display aspect ratio, while the Xperia 1 is at 82-percent. The Galaxy S10+’s display is curved, while the Xperia 1’s is not. Now, these two panels are considerably different as far as form factors are concerned, Samsung’s offer a 19:9 aspect ratio, while Sony’s comes with 21:9 aspect ratio. This will be a matter of personal preference on your part, first and foremost, as both displays offer great contrast, colors, and are generally great in terms of quality.

Viewing angles are great on both phones as well, though we have to say that we preferred the Galaxy S10+’s panel a bit more, overall, both in terms of general output, and aspect ratio, as the 21:9 aspect ratio is still an acquired taste. On the other hand, if you prefer wider displays, and are bothered by curved displays, the Xperia 1’s panel will serve you just fine… both of these are great displays, that’s for sure. It is also worth saying that Sony’s display doesn’t default to 4K resolution, as that would obliterate battery life, but you can watch content in 4K if you have it available. Samsung’s panel also doesn’t default to QHD+, you can switch from fullHD+ to QHD+ in settings, though.

There’s nothing to complain about when it comes to performance on either of these two phones. Both devices are fueled by the Snapdragon 855, though the Galaxy S10+ also comes in a variant with Exynos 9820 in Europe and India. The Galaxy S10+ comes in 8GB and 12GB RAM variants, while Sony opted to include 6GB of RAM in the Xperia 1. Truth be said, both phones are more or less equal in terms of performance, and 6GB of RAM is more than enough for the Xperia 1, and pretty much every phone.

It will be interesting to see how will these two phones perform after 6 months, or a year, but at the moment, they’re shiny and new, and they simply blast through anything you throw at them, with ease. The Snapdragon 855 is an extremely powerful processor, one of the best mobile chips in the market, if not the best one, and in combination with other powerful internals, Android 9 Pie, Samsung’s and Sony’s software optimizations… well, you’re getting real powerhouses here.

It is worth noting that we were not able to properly test battery life on these two handsets prior to writing this comparison, and will update the comparison once we publish our reviews, but based on what we’ve seen thus far, the Galaxy S10+ has an edge here. The Galaxy S10+ actually offer really solid battery life with its 4,100mAh battery, as it will get most of you 5-6 hours of screen-on-time per day. The Xperia 1, on the other hand, has a rather humble battery size, having its display in mind, the Xperia 1’s display is 0.1 inches larger than the Galaxy S10+’s, and its battery is only 3,330mAh.

That doesn’t have to mean that the phone’s battery life will be horrible, or anything of the sort, but it simply seems like it is too small for a 6.5-inch display, despite all of Sony’s optimizations and the Snapdragon 855’s power saving features. The Galaxy S10+ offers fast charging (15W), fast wireless charging (15W), and reverse wireless charging (9W). The Xperia 1, on the other hand, offers faster wired charging (18W), but it lacks both wireless and reverse wireless charging. We will not really pick a winner in this category, as we’re looking to test their batteries further, but it does seem like the Galaxy S10+ will take this one.

The Galaxy S10+’s camera is amongst the best on the market, but comparing it to the Xperia 1’s is not yet possible. We had some time to use the Xperia 1, but the final software was not installed on it, and Sony asked us not to take images just yet. Once we get around to fully reviewing the phone, we will update this category with our score, while we can talk about the cameras in general for the time being. The Galaxy S10+ shoots well-balanced images, both during the day and night. It offers plenty of detail, while the dynamic range is spot on. The Galaxy S10+ comes with a night mode, but it activates only if you’re shooting in pitch dark conditions.

Sony is promising great photos and videos out of the Xperia 1, as the company’s “Alpha team” worked on the phone this time around, folk that usually develop Sony’s DSLRs. That sounds extremely promising, and we cannot wait to get our hands on the device yet again in order to properly test those cameras. Both phones include three cameras on the back, though those setups are somewhat different. They both include regular wide-angle, telephoto, and ultrawide lenses, but the sensors are different, the same goes for lenses. We will leave this category wide open for now, but the Xperia 1 really needs to prove its worth in order to compete with the Galaxy S10+.

In addition to everything we’ve talked about already, it is worth noting that both phones ship with stereo speakers. The Galaxy S10+ is capable of producing 32-bit/384kHz audio (with proper headphones), while Dolby Atmos and AKG were included in the development here. The Xperia 1, on the other hand, does not have a headphone jack, and can produce 24-bit/192kHz audio, Dolby Atmos sound. The Xperia 1 offers dynamic vibration system, though the Galaxy S10+ haptic feedback is nothing to scoff at. We will hold off on picking the ultimate winner for the time being, as two categories are still wide open, and the Xperia 1 can still win this if it beats the Galaxy S10+ in both battery and camera sections.