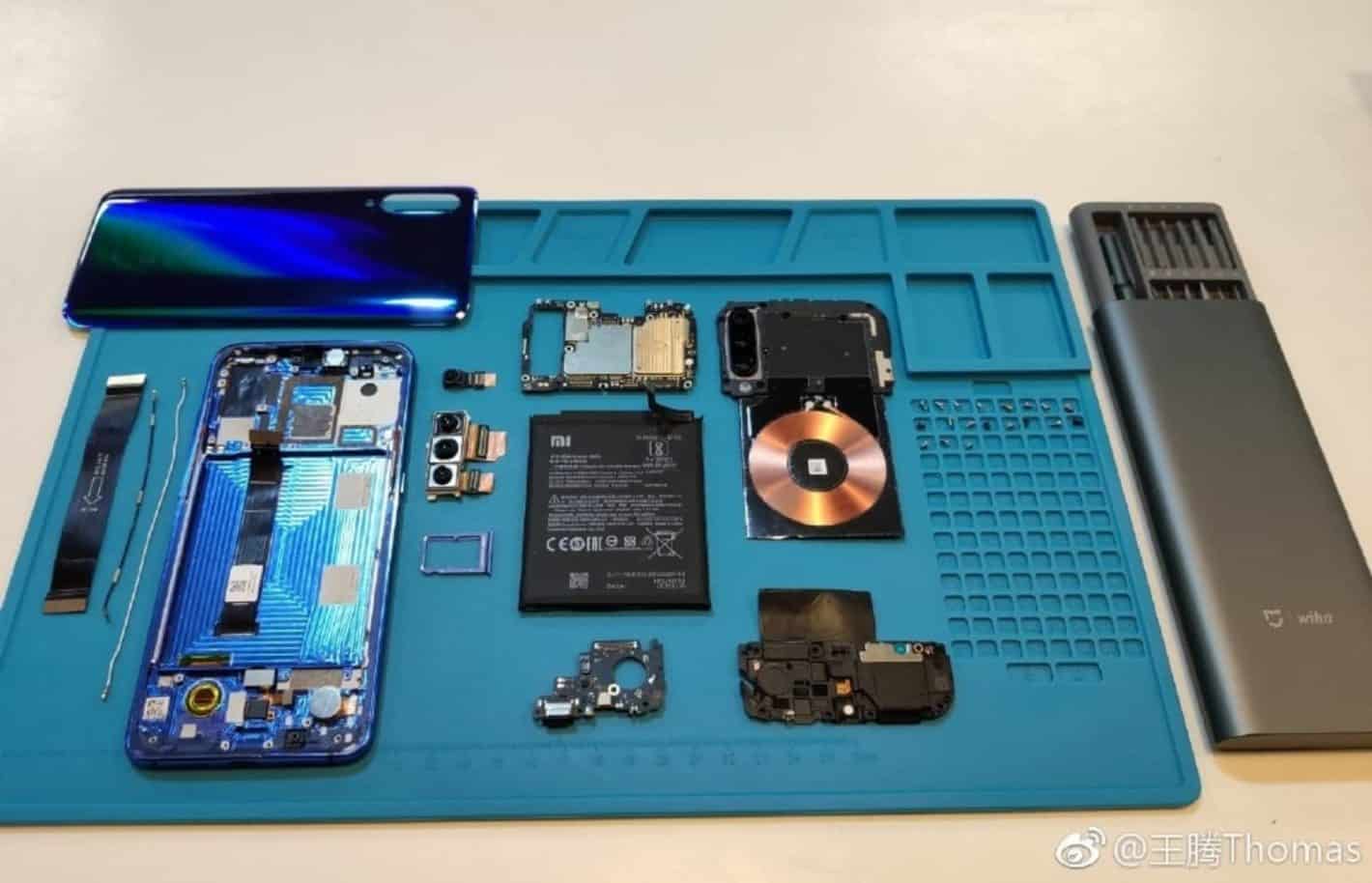 An internal view of Xiaomi's new Mi 9 flagship is now on display for all, following reports that a teardown for the handset was shared to China social media service Weibo by none other than Xiaomi product director Wang Teng. Not only is the handset exceptionally easy to take apart and put back together, making maintenance and repair easy. Wang Teng also notes that the compartmentalization of the design is also straightforward and simple, with efficient use of space being integral to the Xiaomi Mi 9.

Revealing the powerhouse from the inside

Once all of the nineteen fairly standard fasteners are removed and out of the way, the first component underneath the striking blue rear panel is an enormous charging coil coupled with an NFC module. The oversized module is intended to support the new 20W fast wireless charging standard built-in with this flagship. That's double the wattage of the typical wireless charging using the same Qi standard, so an oversized coil makes quite a lot of sense.

That will enable complete wireless charging in right around an hour and 40 minutes.

Setting that aside, and after removing the middle section of the frame for the motherboard's battery board, unveils the full CNC middle frame with heat-dissipating gel exposed. There's no oversized cooling coil to be found but the lower portion of the device reveals the Xiaomi Mi 9 in-display fingerprint recognition module while the right-hand side houses its oversized Z-axis motor.

The device's moderately-sized 3300mAh battery with 18W Quick Charge 4.0 is showcased in that shot too.

The front and back of Xiaomi's motherboard module appear next, complete with P2i nano-polymer coating to protect the components on that board even if water does breach through the service. Contained on that back of the board, the images showcase radio frequency and power supply components.

The front of the board houses the Xiaomi Mi 9's Snapdragon 855 SoC, RAM, and storage. For memory, the Xiaomi Mi 9 ships with 6GB or 8GB RAM and either 64GB or 128GB. The transparent edition of the gadget will see memory and allotment boosted to 12GB and 256GB, respectively. There's also a cutout in place for holding the dual-SIM card drawer and the SIM reader can be clearly seen.

The triple rear camera module comes out all in one piece next, with its 48-megapixel primary sensor with an f/1.75 aperture, a 12-megapixel telephoto sensor with an f/2.2 aperture, and 16-megapixel, wide-angle f/2.2 aperture sensors. The latter of those has a field of view of 117-degrees. Interestingly, the laser autofocus and PDAF hardware appear to be included in the primary board instead of the camera module.

The 1217 speaker module is the final piece to come out and the executive points out that the module is actually much larger than the speaker found in most handsets. It's also claimed to be very loud with great sound quality.

Other specs and information

There are, of course, quite a few components of note with the Xiaomi Mi 9 aside from what's shown in the images. Topping off all of the hardware, the Mi 9 ships in a 6.39 form factor with a water drop notch at the leading edge of the fullHD+ resolution (2340 x 1080) AMOLED 19.5:9 display panel. That's comprised of Gorilla Glass 6 while the rear panel is comprised of Gorilla Glass 5.

The oversized look of the 3300mAh battery can also primarily be explained by the fact that the entire handset, chassis included, only measures around 7.6mm thin. That means the battery itself is much thinner than the standard and spread out over a wider area.

The selfie camera underneath that hardened glass is a 20-megapixel sensor with an f/2.0 aperture. Both camera modules support AI functionality in the new flagship.

Converted from Chinese currency rates, the handset will cost around $445 for the 64GB model while the 128GB model is priced at approximately $490.

Xiaomi is expected to launch its Mi 9 flagship globally in conjunction with Mobile World Congress 2019.