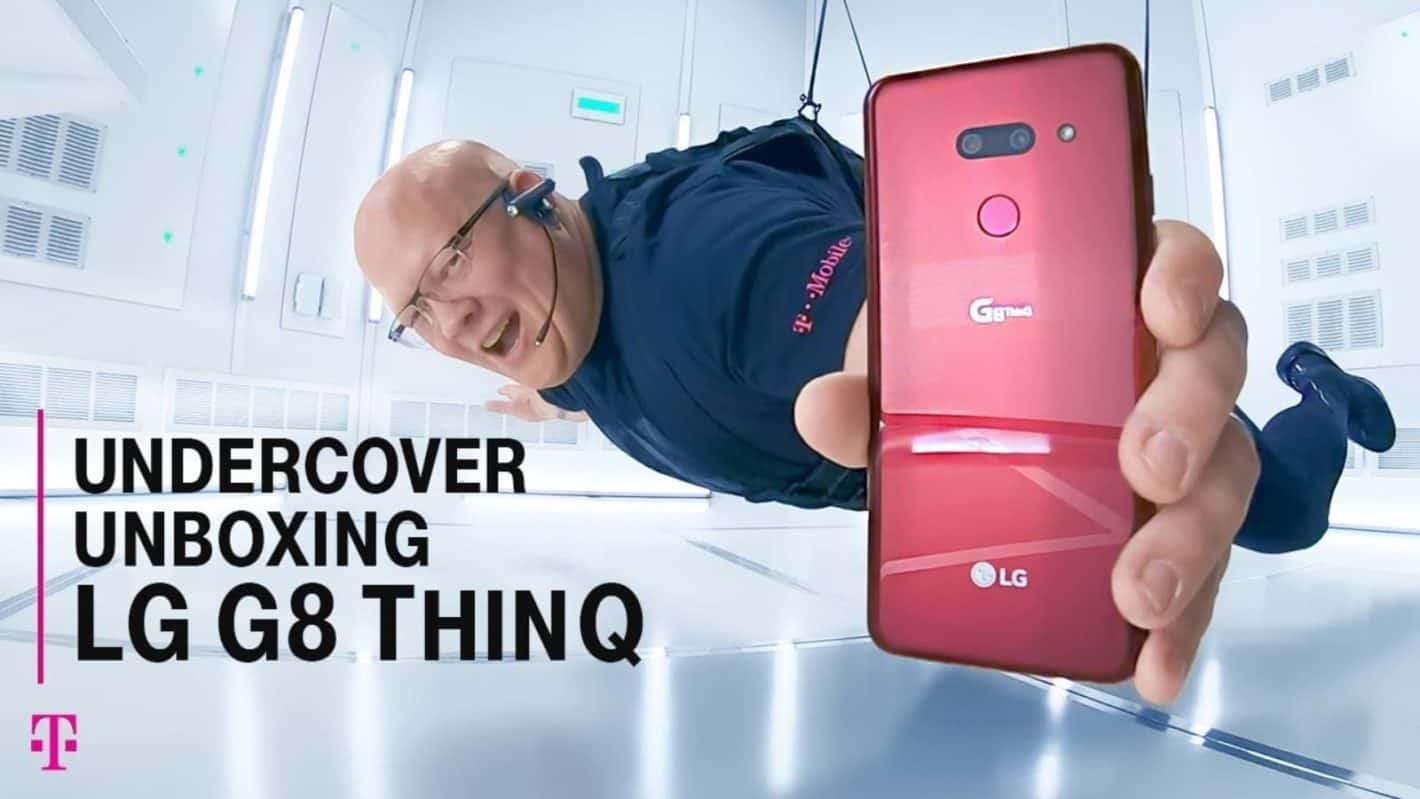 T-Mobile is giving LG’s brand new G8 ThinQ its own unboxing treatment in a new video showcasing featuring fan-favorite PR person Desmond Smith taking a deeper look at the flagship in the carrier’s now-typical cinematic fashion. The not-so-subtle advert, titled ‘Undercover Unboxing’, takes on a spy thriller theme and takes plenty of time to talk up the in-the-box inclusions that ship with the handset. It also displays some of the more interesting features of the new smartphone.

Mr. Smith kicks off the video being lowered down to the LG G8 ThinQ box from the ceiling in a high-tech facility, suspended over the device à la the original Mission Impossible movie. Speaking in whispers, Des cracks open the lid, revealing a soft-touch cleaning cloth that the handset will ship with. The LG G8 ThinQ comes out of the box next, followed by a ‘two-year promise’ and other documents.

A T-Mobile SIM card, for obvious reasons, is pulled out of the packaging next. Finally, Mr. Smith pulls out the LG G8 ThinQ’s USB-C charging cable, and a Quick Charge adapter before letting watchers know the device will come in either Carmine Red or Aurora Black.

Specs and features fit for a spy thriller

This wouldn’t be a T-Mobile unboxing without a quick rundown of some key device specifications. LG’s G8 ThinQ comes with a 6.1-inch QHD+ OLED display panel, to begin with. Running along the bottom edge of the device, Des shows off LG’s decision to include a 3.5mm headphone jack next, placed alongside the USB Type-C charging port and bottom firing “Boombox” speaker. The headphone port still features the popular Quad DAC found in LG’s previous flagship too.

Flipping the handset over as the music intensifies, Mr. Smith touts the device’s horizontally-aligned dual camera array. That’s comprised of a standard 12-megapixel and 16-megapixel wide-angle lens. The fingerprint scanner sits just below.

Around the front of the handset, LG has included an 8-megapixel wide-angle lens and a time-of-flight sensor for more accurate distance measurements, more secure face unlocking, and better portrait mode selfies.

The secondary sensor also serves another purpose, well-suited to the future-tech feel of a spy movie. Namely, it allows for ‘Hand ID’, which unlocks the phone via hand recognition without the user ever needing to touch the display. Simply hovering a hand over the screen from a distance of a few inches initiates the feature. In that same vein, the new sensor in the LG G8 ThinQ allows hands-free gesture controls that the company calls Air Motion.

The hands-free motion controls allow Des to unlock the handset and answer a call, just in time to segway into an explanation of the LG G8 ThinQ’s sound-on-display feature. Dubbed the Crystal Sound OLED Speaker, that’s accomplished by effectively turning the screen itself into a display membrane. Of course, users can also use the gestures to open up their favorite apps, take a screenshot, control media playback, and more.

The video closes out with alarms blaring as Mr. Smith starts up a video on YouTube and utterly fails to turn down the volume quickly enough using Air Motion.

Des doesn’t quite have time to show off all of the specifications from LG’s new G8 ThinQ such as its inclusion of DTS:X audio features or a Snapdragon 855 SoC. That’s backed by 6GB of memory and 128GB on the storage side. The handset will also come with a battery that’s approximately 17-percent bigger than its predecessor while the 3120 x 1440 display is now HDR10-compliant.

Now official, as per LG’s MWC 2019 announcement, the new flagship will arrive on all major US carriers, including AT&T, Sprint, T-Mobile, and Verizon. Pricing and availability will vary by region and carrier.