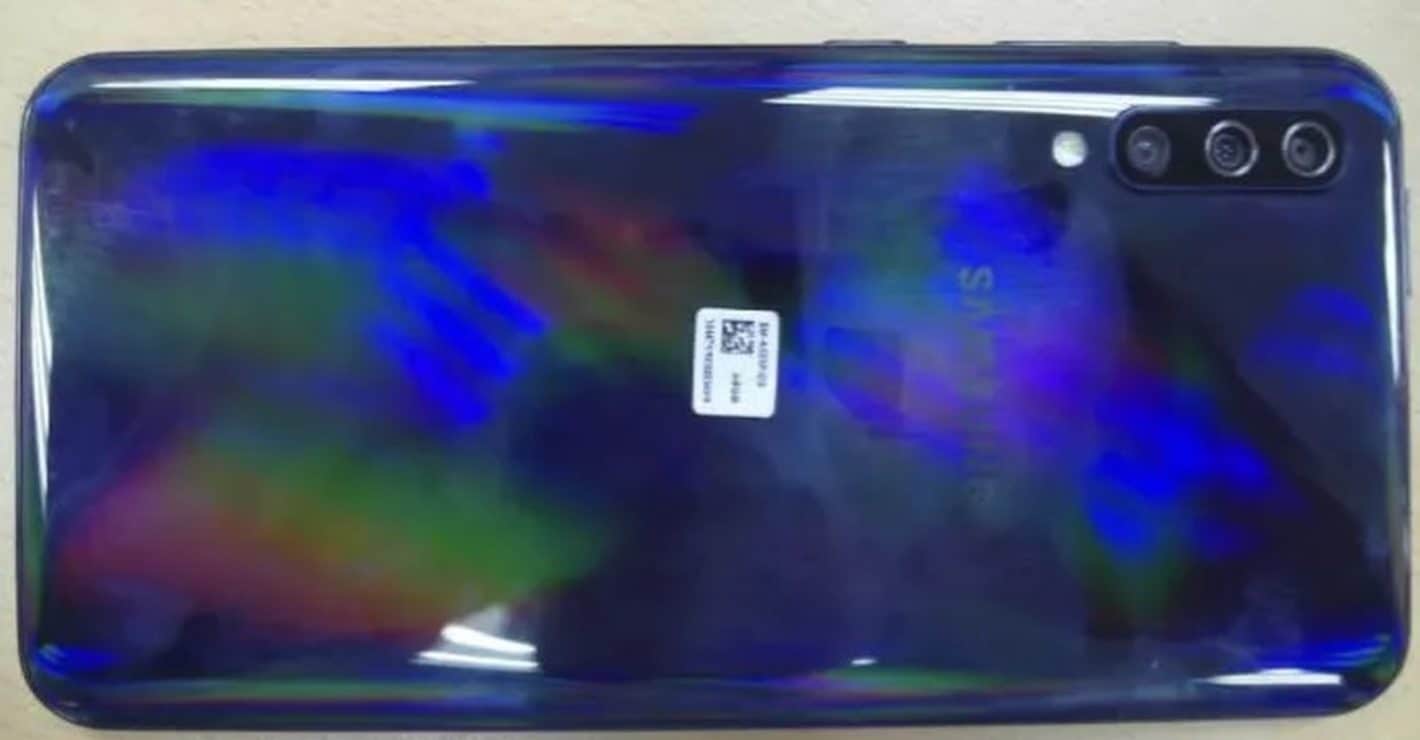 A real photo seemingly showcasing the back of the upcoming Samsung Galaxy A50 was recently acquired and shared by MySmartPrice, partially revealing the smartphone’s design and confirming a few features including a vertically-aligned camera array and the lack of a rear-mounted fingerprint sensor.

The photo confirms the Galaxy A50 will have three main cameras coupled with an LED flash and will arrive in a glossy blue finish but other color options including black and white are expected to be made available at launch. Despite the glossy finish, however, the upcoming smartphone doesn’t really adopt the so-called glass-sandwich design because the back panel is reportedly made out of plastic.

According to this leaked photo, the Samsung Galaxy A50 will be the first smartphone in the new Galaxy A-series to feature three rear-facing cameras. Based on preliminary specifications the triple-camera configuration should consist of a 25-megapixel main shooter with an f/1.7 aperture, an ultrawide 8MP sensor with an f/2.4 aperture, as well as an 8MP depth sensor with an f/2.2 aperture.

The remaining two smartphones in the series including the unannounced Samsung Galaxy A10 and Galaxy A30 are expected to feature single and double cameras, respectively. Additionally, the latter model should have a rear-mounted fingerprint sensor, while the former will apparently lack this biometric authentication method altogether.

Other specifications likely to be part of the Samsung Galaxy A50 package include a 6.4-inch AMOLED display based on the Infinity-U design language, featuring a resolution of 2,340 by 1,080 pixels. It should be powered by the OEM‘s own Exynos 9610 chipset housing four CPU cores clocked at up to 2.3GHz along with four additional 1.7GHz CPU cores and an ARM Mali-G72 MP3 graphics chip.

The smartphone will reportedly arrive in two main configurations featuring 4GB of RAM and 64GB of storage, as well as 6GB of RAM and 128GB of memory. In both cases, storage will be expandable through a microSD card slot, and each variant will be powered by a 4,000mAh battery promising fast charging capabilities.

The Galaxy A50 will be a mid-range device through and through and should hit the market for an appropriate price tag, but nevertheless, there are some characteristics – like the inclusion of an in-display fingerprint sensor – that set it apart from most other devices in its category. It doesn’t have an official launch date just yet but given the rate at which new leaks and rumors are showing up, the device is likely to be unveiled in the coming weeks.