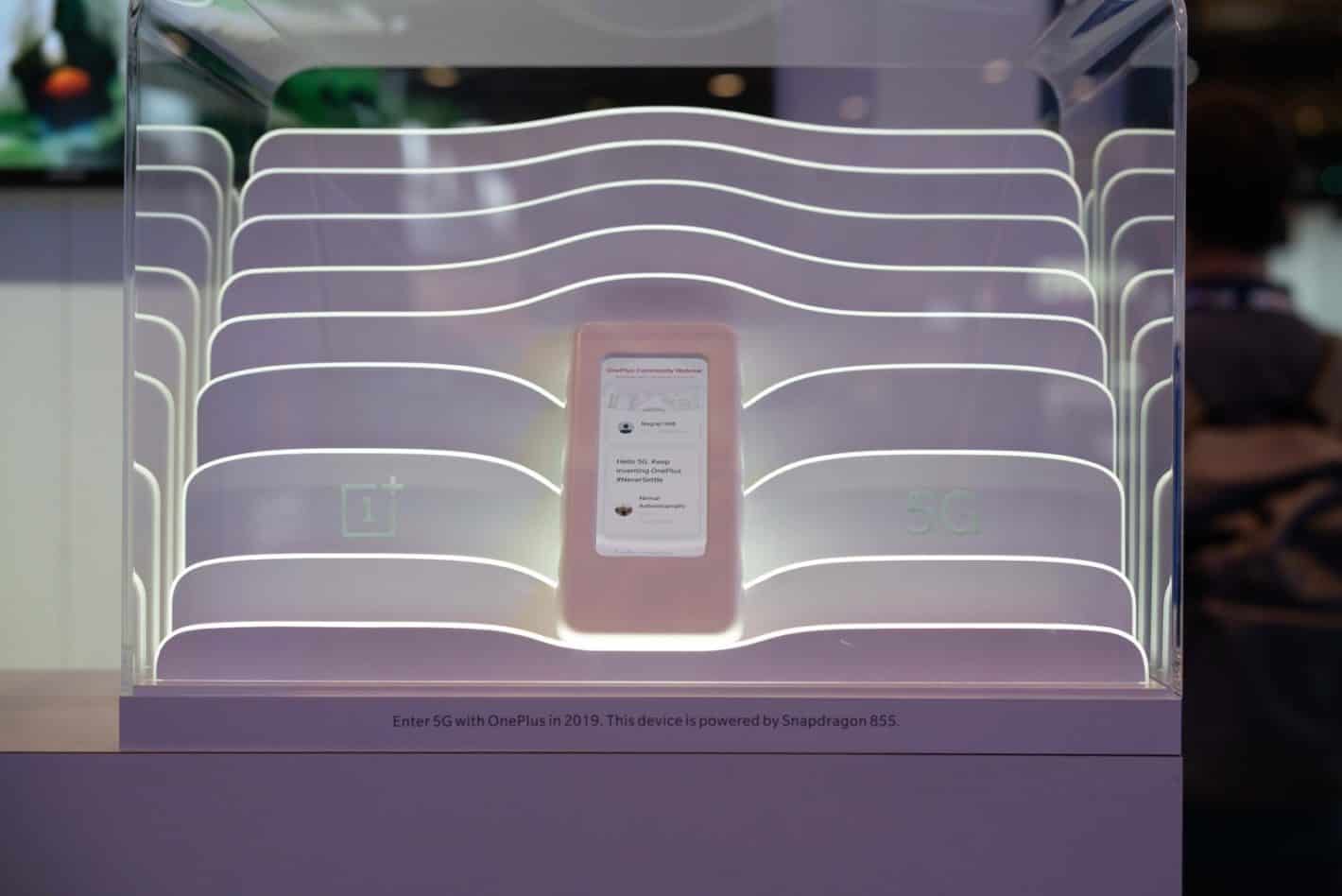 OnePlus has opted not to make any new product announcements at MWC 2019 in Barcelona, but the company did bring its 5G prototype handset to the show. You can see that phone in the provided image, and as you can see, its design is hidden away by a heavy duty case, and the device is actually placed in a glass box, on top of that.

At MWC, OnePlus actually demoed the gaming prowess of a 5G smartphone, well, streaming, more than anything. The game was streaming over a 5G network, and it was running in the cloud, as this was more a demo of the latency, than the phone's processing power, as the cloud will take quite a bit of heavy lifting. OnePlus simply wanted to show off the true power of 5G connectivity.

Considering that the phone was put in a case, and in a glass box on top of that, we can't really tell you much about its design, but even if the phone was shown, it's possible that this is not its final design. One tidbit was revealed, however, the phone's display aspect ratio, the company's 5G prototype sported a 21:9 display aspect ratio, same as the Xperia 1 flagship that Sony introduced yesterday.

This does not have to mean that the final product will sport a 21:9 display, but truth be said, we see no reason why OnePlus would use such a display aspect ratio if it doesn't plan on including it on its upcoming flagship.

OnePlus' CEO, Pete Lau, had recently confirmed that the company's upcoming 5G handset will ship with the Snapdragon 855 and Qualcomm's X50 modem. It was also confirmed that the phone will be coming in the second quarter, but not to the US, even though Pete Lau did say that the company plans to bring 5G smartphones to the US in the future. The phone will arrive to the UK and Finland first, as EE and Elisa will offer it, respectively.

Mr. Lau also confirmed that the phone will be more expensive than the company's regular 4G LTE enabled flagship that is coming, but that OnePlus is doing its best to keep its price tag under $1,000. Now, it remains to be seen how will this phone compare to the OnePlus 7 that is expected to arrive in May or June. Mr. Lau did say that the 5G variant of its upcoming flagship may not be so different compared to the 4G LTE model, in terms of the design.

OnePlus confirmed a while back that its 5G handset will not be a part of its usual release cycle, which led us to believe that it won't be called the OnePlus 7 5G, but there is a slight chance that it may sport that name. Nobody confirmed anything just yet, and we can't exactly make any definite conclusions from Mr. Lau's comments, but it is possible, based on what other companies are doing.

OnePlus' upcoming 5G handset will include flagship-grade specifications, as it will ship with at least 6GB of RAM, in addition to the Snapdragon 855, though there's a chance that OnePlus may include 8GB of RAM instead of 6GB, or even more. A large battery is expected to be included in this smartphone, and OnePlus' Warp Charge fast charging will be apart of the offering as well. The device is expected to include three cameras on the back, and an in-display fingerprint scanner.