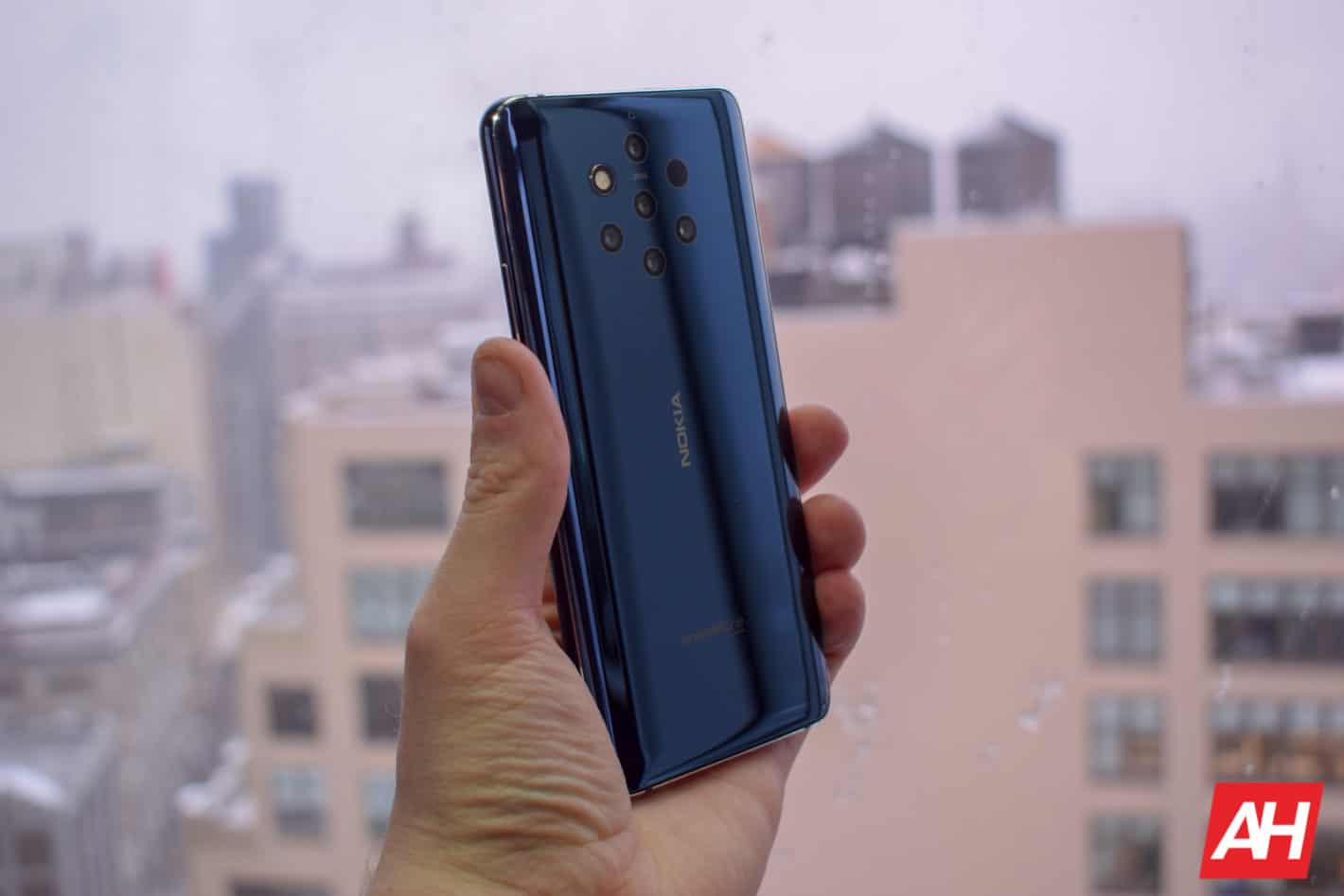 After nearly a year of leaks, rumors and reports, HMD Global has finally unveiled the Nokia 9 PureView

As expected, the Nokia 9 is the first penta-camera smartphone in the world, and it offers some rather impressive specs, as well as some pretty interesting design choices. This all comes at a pretty competitive price point, and it will be coming to the US at some point.

The spec sheet for the Nokia 9 PureView is actually pretty high-end. It sports a 5.99-inch P-OLED Quad HD+ resolution display. Powered by the older Qualcomm Snapdragon 845 chipset, along with 6GB of RAM and 128GB of storage. There is no micro SD card slot available, however, HMD Global is really hyping up the fact that you do get unlimited storage on Google Photos with the Nokia 9 PureView.

When it comes to the cameras, there are five 12-megapixel sensors on board. Three of which are color sensors, the others are monochrome. Essentially these are all the same sensors, at a normal 28mm focal length. On the front, there is a 20-megapixel camera for taking selfies. This is all powered by a 4,000mAh capacity battery, which should last all day. Finally, there is Qi Wireless charging included, but not fast wireless charging, so you’re stuck with the same 5W wireless charging.

The design of the Nokia 9 PureView is not that different from other Nokia smartphones. It’s a glass sandwich with a metal frame. HMD Global used 2.5D Glass on the backside, so you have a curved feel. This makes the phone feel much nicer in the hands than you might expect. The sides, where the metal and glass melt into each other, are not sharp either, that also helps to make it feel good in the hand.

Another design choice that many are going to love, is the fact that HMD Global did not give the Nokia 9 PureView a notch. It is sporting a 18:9 aspect ratio, but there’s no notch. The top and bottom bezels are symmetrical. They do look a tad large, however, it makes it easier to hold the phone in landscape for taking photos or watching video.

With so much attention being on the cameras for the Nokia 9 PureView, many might have forgotten about the fingerprint sensor. With the Nokia 9 PureView, it is under the display. This is an optical fingerprint sensor, so expect about the same performance as those found in the OnePlus 6T, Huawei Mate 20 Pro and others. That means it’ll be decently fast, but still slower than a sensor on the back of the phone.

At launch it will sport the latest version of Android, and also get updates to Android Q and likely beyond. HMD Global has done a great job at updating it’s smartphones since it revived the Nokia brand two years ago. The Nokia 5 is a good example of this, seeing as it launched with Android Nougat, and is now running on Android Pie.

HMD Global didn’t do much with the software on the Nokia 9 PureView, even though it partnered with Adobe on this camera, it is not pre-loading any Adobe software. But you can still download Lightroom to edit photos taken with this smartphone. Nokia wanted to make sure that the “stock Android” feel remained constant with the Nokia 9 PureView.

There are five cameras on the Nokia 9 PureView, and these are all basically the same sensors. These are all 12-megapixel sensors. The only difference is that there are three RGB or color sensors with two monochrome sensors. Many might be wondering what the point is in having multiple sensors doing the exact same thing? Well this means HMD Global is able to get up to 10-times the light in each image than a traditional sensor.

HMD Global says that the Nokia 9 PureView is using all five cameras on every single shot. Each sensor will give you about 2.9-times the light that a sensor from something like the Nokia 8 Sirocco would provide. Spread that across five sensors, and you are well over 10-times the light. This makes for a really big deal when you are using your phone for pictures at night or for a faster shutter speed in brightly lit situations. Which is useful for getting shots of kids.

The Nokia 9 PureView uses next-generation computational photography, which takes mobile photography to the next level. HMD Global worked with both Qualcomm and Light to really improve this camera and make it (potentially) one of the best smartphone cameras out there. HMD Global is getting around 240-megapixels worth of data in each shot. That’s a whole lot of data, but it is processed into a single 12-megapixel image. Which is still large enough for sharing on Facebook and Instagram without taking up a ton of space.

With these extra cameras, HMD Global was able to give users even more creative control over images, without relying on software to get it done. For example, when you adjust the Bokeh after you take a picture on something like the HONOR View20, it is adding detail that the camera lens did not capture. With the Nokia 9 PureView, it has that detail. So it looks more true to life, instead of adding artifacts and colors that weren’t there to begin with.

Thanks to having two dedicated monochrome sensors, users are able to take images in monochrome or black and white without relying on software to take out all of the color from the photo.

Nokia 9 PureView also supports shooting in RAW, and those DNG format images can be edited in Adobe Lightroom on the phone. HMD Global did work with Adobe to make this possible. The app is not pre-installed (as mentioned earlier), as this is an Android One smartphone and wants to keep it as close to stock as possible. But you can download it onto the Nokia 9 PureView and use it for editing.

There is a “pro” UI within the camera on the Nokia 9 PureView, and users can see the settings take effect in real time. This makes it a great way for professionals and amateurs to really take advantage of the pro UI and see what they can do with the camera. Finally, the Nokia 9 PureView does also support long exposure times, up to 10 seconds.

Since the Nokia 9 PureView is an Android One smartphone, users will get unlimited photo backup on Google Photos for the full-resolution images. However, the only caveat with this is the fact that it will not backup full-sized RAW images, so keep that in mind.

Pricing has not been announced for each region yet, but HMD Global did say that the average price globally would be $699, making it super competitive. The Nokia 9 PureView will be making its way to the US, though specific availability has not yet been announced either.

The Nokia 9 PureView is going to be a “limited edition” device, so don’t expect there to be millions sold. This appears to be more of an experimental smartphone for HMD Global to see how its customers react to it. If it does well, there may be a Nokia 9.1 PureView coming soon.