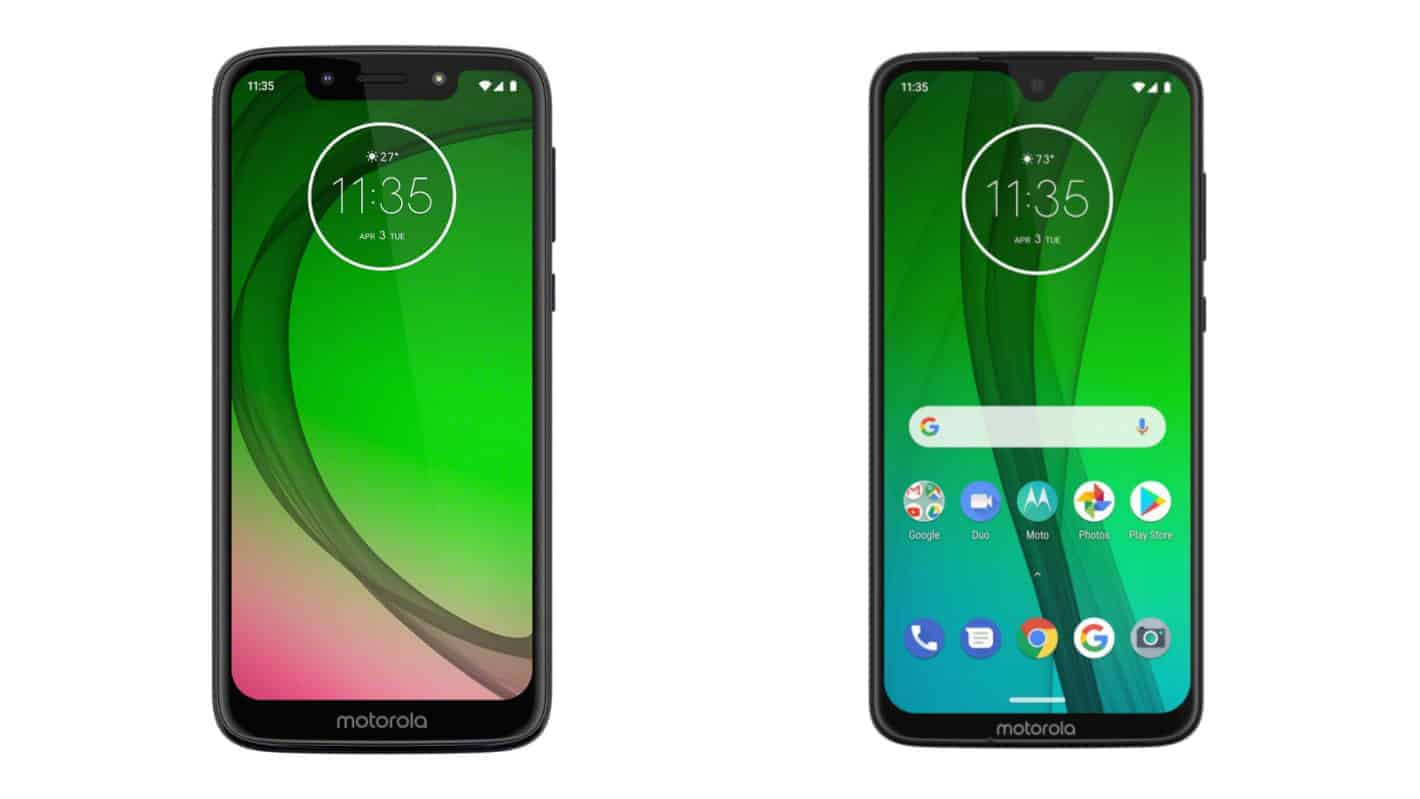 With four variants of the Moto G7, Motorola is hitting virtually every price point there is, ranging from $199 to $299 (and €299 for the Moto G7 Plus that won't be coming to the US). Motorola looked to improve its best-selling line of smartphones in the history of the company, and it thinks the Moto G7 is doing just that.

The Moto G7 starts things off with a 6.2-inch Full HD+ display, and a 2270×1080 resolution. It is powered by the Qualcomm Snapdragon 632 chipset. That is paired with 4GB of RAM and 64GB of storage, along with Adoptable Storage support through the micro SD card slot.

Motorola has also given the Moto G7 two cameras on the back with a 12-megapixel main sensor and a 5-megapixel sensor for depth data. This camera does also have a single LED flash, as well as phase detection autofocus, so that it is able to autofocus pretty quickly, even in dimly lit environments. The front-facing camera is a 8-megapixel sensor that does not come accompanied by a flash but instead uses the screen as a flash.

This is all powered by a 3000mAh capacity battery. Motorola has also included its popular 15W TurboPower charger in the box, which will get you nine hours of usage in just 15 minutes of charging.

The Moto G7 does sport a notch, but it is the "tear-drop" style notch, so you're looking at a pretty small notch. And one that many would say is the least annoying. The backside is a curved like most of Motorola's recent smartphones, and made of glass. The Moto G7 does still sport that iconic Motorola design with the camera bump and Motorola dimple below it.

Similar to the Moto G6 Play last year, the new Moto G7 Play is also the smallest in the lineup. It does have a larger notch, reminiscent of the iPhone X/XS notch actually. With the front-facing camera being on the left and the flash on the right of the earpiece. There is also a pretty substantial chin here, with the Motorola logo on the chin. The Moto G7 Play appears to be made of plastic this time around, which makes sense since it is a cheaper smartphone.

As far as specs go, the Moto G7 Play has a 5.7-inch HD+ display with a resolution of 1512×720. That is powered by the same Qualcomm Snapdragon 632 chipset that is found inside the regular Moto G7 Play. But where things differ is with the RAM and storage capacity, which is 2GB and 32GB respectively. And there is also micro SD card expansion available.

Moto G7 Play sports a single 13-megapixel sensor on the backside. Which means you likely won't get much in terms of Bokeh out of that camera. But it does have phase-detection autofocus and a f/2.0 aperture. The front-facing camera is a 8-megapixel sensor with a f/2.2 aperture.

As you can likely tell by the name, the Moto G7 Power is the model that is going to last all day long. It sports a massive 5000mAh capacity battery. It does come with the same sized display as the regular Moto G7 at 6.2-inches. Though this is a HD+ display with a 1520×720 resolution. It is also powered by the Snapdragon 632, which is actually really good to see. Typically Motorola will cripple the lower-end models with a lower-end chipset, but that's not the case this year.

With the Snapdragon 632, Motorola has included 3GB of RAM and 32GB of storage, which is expandable via micro SD card.

On the camera front, there is a single 12-megapixel camera that does have a f/2.0 aperture and phase detection autofocus, so it won't be total trash. The front-facing camera is a 8-megapixel sensor with a f/2.2 aperture.

The Moto G7 Power does look pretty high-end, which might be a bit surprising, considering this is a pretty cheap smartphone with a large capacity battery. It appears to have a glass back along with glass sides. Which means you will want to put this into a case as soon as you get it.

However, one thing that the Moto G7 Power has over the other models is, a smaller camera bump. Instead of a huge camera bump that sticks out, this one is almost flush with the backside of the smartphone. That is likely due to the larger battery capacity here. But it's something users have been asking all smartphone manufacturers to do. There is still a notch on the Moto G7 Power, though it's not quite as large as the Moto G7 Play's but not as small as the Moto G7's. It's similar to the OnePlus 6's notch from last year. Which isn't too bad, for an inexpensive smartphone, it could be worse (see Pixel 3).

The Moto G7 Plus is the highest-end of the lineup, and it comes with the Snapdragon 636 under-the-hood and 4GB of RAM with 64GB of storage. It also has a micro SD card slot for expanding storage. Similar to the regular Moto G7, it also has a 6.2-inch Full HD+ display with a 2270×1080 resolution. It also has a 3000mAh capacity battery inside. Motorola will be including a 27W TurboPower charger in the box, which will give you about 11 hours of usage on a 15-minute charge. This is due to Quick Charge 4.0 and USB-C PD being included.

Dual-cameras are on-board the Moto G7 Plus. Coming with a 16-megapixel main sensor which has a f/1.7 aperture. There is also optical image stabilization available on this sensor. The secondary sensor is a 5-megapixel unit used for depth. The front-facing sensor is a 12-megapixel camera. Which makes this the better camera, at least in terms of hardware, of the four smartphones in the Moto G7 family.

Motorola stepped up the audio game on the Moto G7 Plus. It sports two speakers – for stereo speakers – and it worked with Dolby to provide Dolby Audio with these speakers. However, that does not mean Dolby Atmos support, just that the speakers were tuned by Dolby. This means you will get a better sound experience out of the Moto G7 Plus, compared to the others announced today.

The Moto G7 Plus is also a glass-backed smartphone, coming in either blue or red. There is a camera bump and the iconic Motorola dimple on the back. The front, looks rather familiar. It has the same tear-drop notch as the main Moto G7 smartphone. Which means you are getting a lot more screen-to-body ratio than on the cheaper Moto G7 Play and Moto G7 Power.

All four Moto G7 models do run on Android 9 Pie out of the box. Given the way that Motorola has fallen in terms of software updates, that might be a bit surprising. But could also be the only update it gets. Motorola is sticking to its approach of using a stock version of Android with a few features added on top.

Motorola has done away with the software buttons on the Moto G7, instead it uses a single bar at the bottom of the display – which looks similar to the iPhone X/XS gestures. Motorola says that every swipe and tap is now better with this bar, making it easier to navigate through the OS, and it is also easier to use than Google's own gestures.

The old favorite features are still available on Motorola's smartphones. This includes the different gestures for opening up the flashlight, or the camera. As well as its always-on display, and much more.

The Moto G7, Moto G7 Play, Moto G7 Plus and Moto G7 Power are available in Brazil and Mexico beginning today. Other regions will get these smartphones in the coming months.

For the US, the Moto G7, Moto G7 Power and Moto G7 Play will be available in the Spring. At retailers including Amazon, Best Buy, B&H Photo and Walmart. It will also be available at Google Fi (main Moto G7 only), as well as other MVNO's like Republic Wireless and Ting.

All four models will arrive in Canada this Spring, available on Bell, Virgin Mobile, Videotron, Rogers, Fido and Freedom Mobile.

Motorola adding four models to the Moto G7 family is not a surprise. It has continued to add more and more over the years. But the good thing is that there is one model of each, and not different variants with different RAM/storage capacities. Which makes it a bit easier to see which is the better option for you. Motorola wants to make sure it has something for everyone and with the Moto G7, they do.