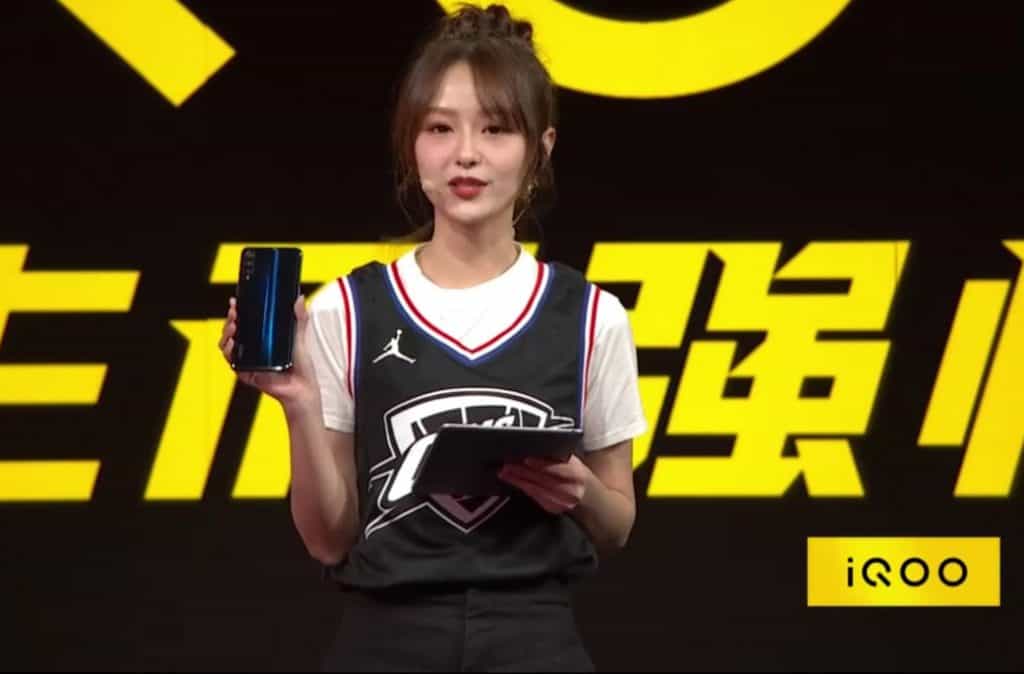 UPDATE: IQOO also confirmed that the phone will sport 12GB of RAM, 256GB of storage, and a 4,000mAh battery. That's not all, the company said that a Type-C USB port will be in place as well, and will support 44W fast charging. An NFC chip will be a part of the offering as well, while the phone will offer "4D gaming experience" and "support Super HDR".

Vivo had introduced its IQOO sub-brand last week, and now some more info surfaced regarding that company's very first smartphone. IQOO confirmed that the upcoming smartphone will be fueled by the Snapdragon 855, Qualcomm's most powerful processor to date. This was confirmed during the 2019 NBA All-Star Weekend, and in addition to confirming that fact, the company also showed off the back side of the device, which confirmed some details.

As you can see in the provided image, which is not the best, to be quite honest, IQOO's upcoming handset will be made out of metal and glass, while it will have that reflective backplate that many manufacturers go with these days. This is a dark blue variant of the device, and the provided image also confirms that the phone will have three cameras on the back, which will be vertically-aligned.

IQOO opted to tease the phone by sharing a couple more tidbits. IQOO confirmed that the device will feature a sixth-generation in-display fingerprint scanner, and that it will cover most of the phone's lower portion of the display. That fingerprint scanner will also support two-finger unlocking.

That is more or less all the info that IQOO shared, but based on it, it's safe to assume that the upcoming smartphone will be a high-end product. IQOO had been introduced as a high-end brand by Vivo, so we can expect to see either gaming smartphones produced by it, or regular high-end devices, only time will tell. We still do not know when will the company's first phone be announced, but considering that IQOO shared some info about it during an official event, its launch cannot be far away at this point.

What About IQOO's Foldable Smartphone?

Some of you probably know that IQOO's alleged foldable smartphone surfaced last week as well, not long after IQOO brand was introduced to the public. Those renders showed off a really great-looking device with practically no bezel, and they did seem a bit sketchy at the time, and that did not change at this point. Those renders may as well be showing some sort of a concept phone that has nothing to do with the company, but who knows, IQOO may end up surprising us.

One thing is for sure, the device that IQOO showed off during the 2019 NBA All-Star Weekend is definitely not foldable, it's your regular 2019 smartphone, and we'll hopefully get more info about it in the near future. IQOO is already present on a number of social media networks, so chances are that the company will start teasing the upcoming device in the near future, as it's hard to expect that it will arrive without a proper marketing campaign to hype it up a bit. IQOO has the advantage of being Vivo's company, as that already gave it plenty of exposure, and it remains to be seen if that will help the company strive once its smartphone arrives. It is possible that the company's first smartphone ends up launching in China first, after which it may arrive to other markets.