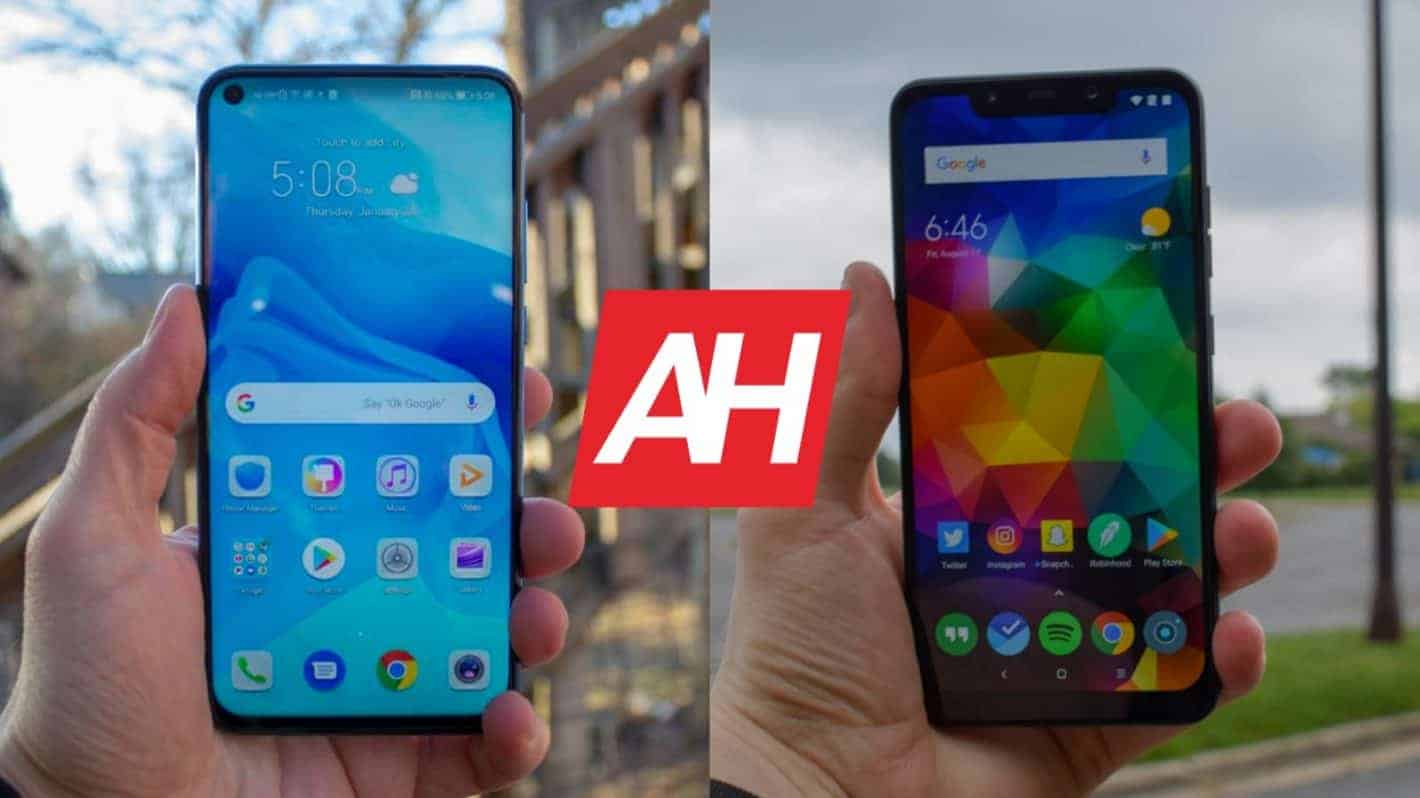 If you’re looking to get a “budget flagship” smartphone, it’s quite possible that you’ve considered getting either the HONOR View20 or the Pocophone F1.

Well, we’ll try to help you get to the bottom of that in this comparison, as well as compare the two in a number of categories while providing some additional information on the side.

These two devices are considerably different when it comes to the design. They both result in a similar physical footprint, but are made of different materials and overall look vastly different to each other. The HONOR View20 is arguably the better-looking handset as it sports a rather compact display camera hole, while the Pocophone F1 features a really wide notch – one of the widest out there. The HONOR View20 also has a thinner “chin” below the display, and simply looks better overall.

All in all, it’s hard not to give this one to the HONOR View20 as it feels more premium and looks much better as well.

When it comes to display size, the HONOR View20 offers more along with a taller display aspect ratio. A combination that makes it a bit taller than the Pocophone F1, despite the fact it has a thinner “chin”. The HONOR View20 features a 6.4-inch fullHD+ (2310 x 1080) IPS LCD display, while the Pocophone F1 comes with a 6.18-inch fullHD+ (2246 x 1080) IPS LCD display. Both of these displays are quite decent, they’re not among the best in the market, but they’re not among the worst either.

The HONOR View20 has the edge here as the colors on its display do seem a bit more punchy. Neither of the two phones have issues with color shifting, and viewing angles are quite good as well.

If you don’t mind LCD displays, both of these displays will serve you well, but the View20 does edge out the Pocophone F1.

Both of these smartphones ship with capable hardware, and the same actually goes for software. The Pocophone F1 does not come with Android 9 Pie out of the box, but as soon as you fire up the device, you will be able to update the software to Pie. Both of these phones do come with Android overlays form their respective manufacturers, Magic UI 2 is pre-installed on the HONOR View20, while the Pocophone F1 comes with MIUI 10.2 POCO, which will be upgraded once you update the device.

Both of these phones are great performers, and it’s hard to find objections to either of them although Magic UI 2 does seem more polished and the performance was a little better overall compared to the Pocophone F1’s MIUI. This difference is not that big, and both will likely prove to be great performers that can handle any games you throw at them.

The same goes for regular day-to-day tasks, but once again the HONOR View20 is the slightly better option of the two.

In terms of battery life, you really cannot go wrong with either one of these two phones. Both are true road warriors and chances are you will not need to charge either of these two devices before bed, and that's even if you are a power user.

In testing, we’ve been able to get to 8-9 hours of screen-on time during with both of these phones, though this will vary by user and dependent on individual habits. For example, on some days it was only 6-7 hours of screen-on time. Either way, the takeaway is they’re both great smartphones in terms of battery life.

Both the View20 and the Pocophone F1 ship with a 4,000 mAh non-removable capacity battery and even though the HONOR View20’s display is bigger, it has proven difficult to decide which is ultimately the better option in this respect. As a result this was is a tie as you cannot go wrong with either on battery life.

This is one category where the HONOR View20 has a considerable advantage and it did manage to surprise us quite a bit with its camera prowess.

Starting with the Pocophone F1, the dual camera combination on this smartphone provides well-balanced images in daylight and the chances are good that you will not have an issue with it as long as there’s plenty of light available. When it comes to low light, however, the camera can struggle and noise crawls in easily. Truth be said, in its price range, this camera is good even in low light, but compared to the View20, not so much.

The View20 takes great images in low light and even in auto mode. We were actually quite surprised what its pixel binning technology can do while turning 48-megapixel images into 12-megapixel ones. When it comes to daylight, images turn out equally as great and with a ton of detail. As far as video recording is concerned, both can shoot 2K content at 30fps, and both cameras are okay in this respect with nothing to majorly write home about. Both front-facing cameras are also okay although the View20 has a slight advantage here as well, as its front-facing camera provides better shots in low light compared to the Pocophone F1.

Overall, this category undoubtedly goes to the HONOR View20.

As is customary, we cannot talk about all the differences in this comparison, but we will mention some additional ones here.

Is the HONOR View20 a better phone? Well, yes, in our opinion it is. However, that is not too surprising considering it’s quite a bit more expensive and is also newer. The Pocophone F1 is still a great option at its price point, and you will not find a better phone for a bit more than $300. The HONOR View20 is priced at €569, which comes to $651, and that's almost twice the cost of the Pocophone F1.

Whichever you do ultimately opt for, both phones are highly capable, and depending on what you need in a phone, both provide a ton of features and will prove to be good buys.