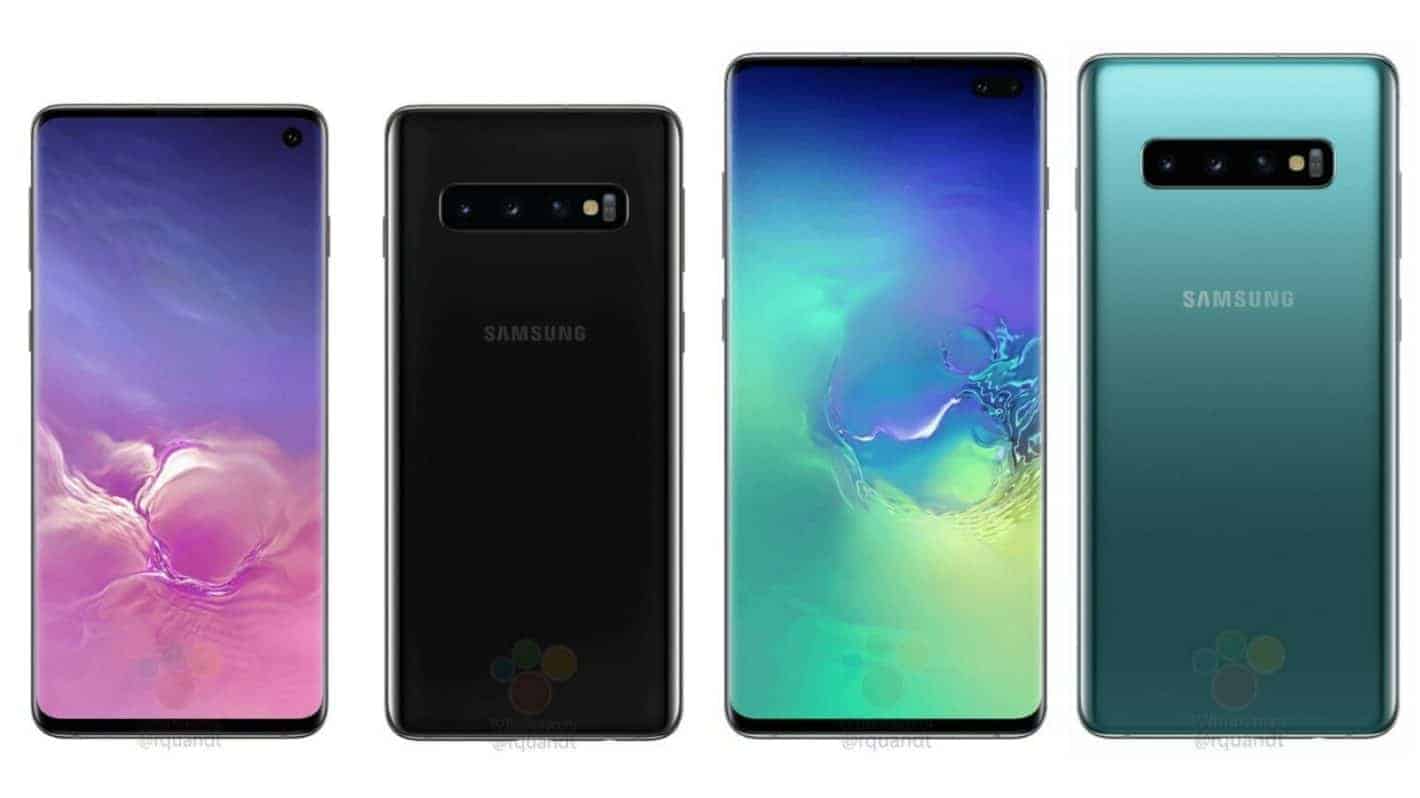 A very revealing render of the Samsung Galaxy S10+ surfaced yesterday, and now a bunch of additional Galaxy S10 and S10+ renders appeared, showing off both devices in all color variants. These renders seem to be official, and they've been leaked by WinFuture.de, which is not the first time we're seeing full Galaxy S lineups leaked by the site, so chances are these renders are accurate.

Both the Galaxy S10 and S10+ are pictured here in three color variants, black, white, and green, though chances are that the company will use more fancy names for these colors. The Prism Black and Pearl White colors were mentioned in the past, while the Green one may be called Emerald Green, but we'll see.

As far as the design is concerned, these two phones are exactly what you'd expect, considering that such info surfaced a number of times in the past. Both devices are made out of metal and glass, and both sport three cameras on the back, those cameras are horizontally aligned. On the front, the Galaxy S10 sports a single camera, while the Galaxy S10+ comes with two cameras. Those cameras are actually placed in display cutouts, which is something you'll tolerate, or hate, it all depends.

Both the Galaxy S10 and S10+ will sport a thin "chin" below the display, as pictured in these renders, while both of them will also ship with curved displays. On the right, you'll notice a power / lock button on both devices, while on the left lie the volume up, volume down, and Bixby buttons. Samsung's logo is placed on the back of both devices, and as you can see, the back side of both phones is also curved.

You may notice that a fingerprint scanner is not visible on either of these two phones, that's because it will be located under the display on both phones. Another thing you will notice is that the display on both devices sports rounded corners, and that the two devices are basically identical in terms of the design, save for the number of cameras on the front.

What Specifications Will The Two Phones Sport?

The Galaxy S10 is rumored to ship with a 6.1-inch QHD+ Super AMOLED display, which will be curved, as already mentioned. The device will include 6GB / 8GB of RAM and 128GB / 512GB of internal storage, based on the info thus far. Both devices will be fueled by either the Snapdragon 855 or Exynos 9820 SoC, depending on where you buy your unit, as the Exynos model will sell in Europe and India, while the Snapdragon model will be available in the US and China.

The Galaxy S10+, on the other hand, will ship in 6GB and 8GB RAM variants, with 128GB and 512GB of storage. It will include a 6.4-inch QHD+ Super AMOLED display. The top-of-the-line Galaxy S10+ model is also expected, though that variant will include 12GB of RAM, 1TB of RAM and ceramic back, while it will also support 5G, and it may sport a different name, the Galaxy S10 X, perhaps. In any case, that model is expected to arrive later on, it will almost certainly not going to become available at the same time as 4G LTE variants, which will launch on February 20, and become available for purchase in early March, quite probably.