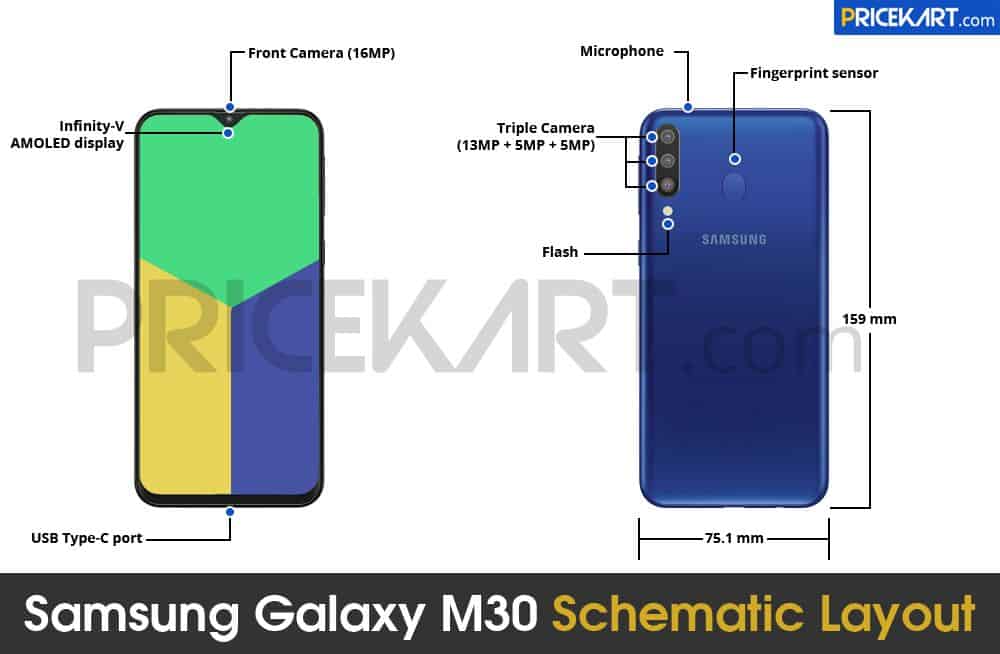 Some of the characteristics surrounding the upcoming Samsung Galaxy M30 have been revealed through a leaked schematic shared by PriceKart (as seen below). The device looks very similar to the Galaxy M20 introduced in India not long ago but carries three main cameras on the back panel instead of two. Otherwise, the smartphone has a rear-mounted fingerprint sensor and a USB Type-C connector but the 3.5mm headphone jack goes unmentioned.

The inclusion of TFT display technology for the two entry models has been the subject of ridicule, particularly from Xiaomi who maintains market leadership in India and may feel threatened by Samsung’s latest offerings. Samsung is the second most popular brand in India and the Galaxy M series generally targets the budget segment in which Xiaomi usually thrives.

Other rumors indicated that the Galaxy M30 could feature an IPS LCD display but this is not the case according to the recent leak. Either way, the phone should have a 6.38-inch panel with a resolution of 2210 x 1080, and the glass covering the display should be curved around the edges. The recent schematic suggests that the phone will be 159mm tall and 75.1mm wide.

Additionally, the source suggests that the Samsung Galaxy M30 will be powered by the same chipset found inside the Galaxy M20, i.e. the Exynos 7904 which features two ARM Cortex-A73 CPU cores clocked at up to 1.8GHz, and six additional Cortex-A53 cores operating at a frequency of up to 1.6GHz. The chipset will be coupled with the Mali-G71 MP2 graphics chip, 4GB or 6GB of RAM and 64GB or 128GB of internal storage.

The V-shaped notch is said to accommodate a 16-megapixel camera, up from the 5-megapixel and 8-megapixel cameras employed by the Galaxy M10 and M20, respectively. The device should also include an additional 5-megapixel rear-facing depth sensor in addition to the dual-camera configuration employed by its smaller counterparts. The source also mentions that the Galaxy M30 should hit the market in two main color options including gradient black and blue, and reconfirms that it carries a generous 5,000mAh battery similar to the Galaxy M20.

At the time of writing, it’s unclear when the Samsung Galaxy M30 will be introduced to the Indian market and for what price, but in theory, it should follow closely in the footsteps of its smaller siblings. The Galaxy M20 has a starting price in India of Rs. 10,990 ($154) for the variant with 3GB of RAM and 32GB of memory, while the upper-tier model with an additional GB of RAM and double the storage is priced at Rs. 12,990 ($182).

Having said that, it’s very likely that the Samsung Galaxy M30 will break the $200 mark regardless of what memory configuration it will have, particularly given the OLED screen and an additional rear-facing camera, among other upgrades.