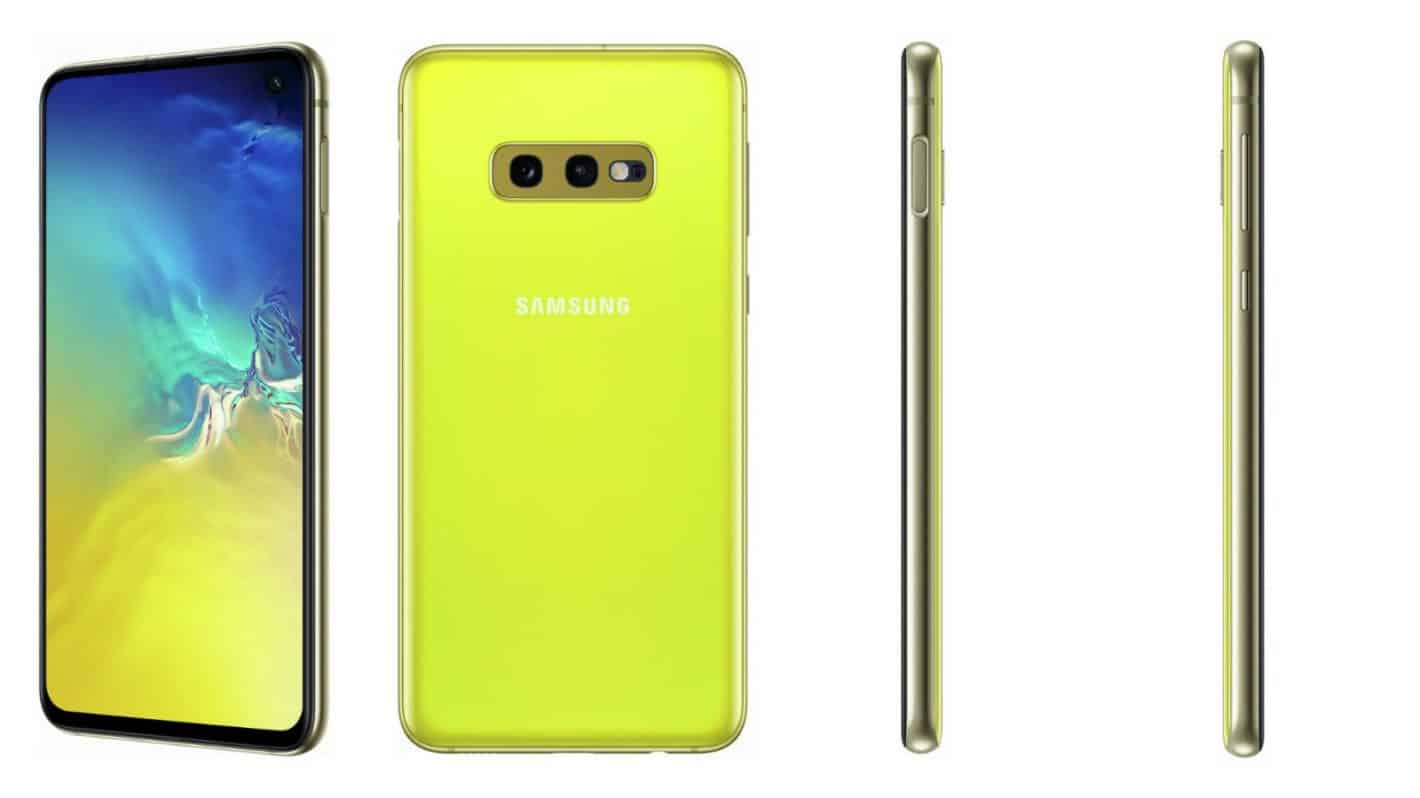 Roland Quandt, a well-known tipster, has shared a bunch of new, high-quality Samsung Galaxy S10e renders. These are the renders of the Canary Yellow Galaxy S10e variant, and in addition to them, Ishan Agarwal, yet another tipster, shared some more info regarding the phone's camera setup.

The Canary Yellow Galaxy S10e will be easy to spot, that's for sure, as that yellow color will be quite pronounced, so if you don't like bright colors, this will definitely not be an option for you. The Galaxy S10e will be made out of metal and glass, and it will include two cameras on the back, while a single unit will be placed in the top-right portion of its display.

Samsung's logo is also visible on the back of this phone, while a fingerprint scanner will be implemented on its right side, which is something the provided renders clearly show us. The volume up, down, and Bixby buttons will sit on the right-hand side of the phone, while a SIM card tray will probably be accessible from the top, though we don't really get to see that here, as an image of the top of the device is not available.

The Galaxy S10e will be the only Galaxy S10-branded smartphone to ship with a flat display, and the provided images clearly show that there is no curved on the sides. The back side of the phone is curved, and the device's display sports rounded corners, the same will be the case on all Galaxy S10 devices.

As mentioned in the first paragraph, Ishan Agarwal shared some extra info on the phone's cameras. He mentioned that the Galaxy S10e's second camera will not help as far as Portrait Mode / Bokeh are concerned, he says that "Live Focus" or Portrait Mode on the Galaxy S10e will be entirely dependent on the software.

The Samsung Galaxy S10 will be the smallest Galaxy S10-branded handset, not to mention that it will be the only one to sport a flat display, two rear-facing cameras, and a side-facing fingerprint scanner. The device will include a 5.8-inch fullHD+ (2280 x 1080) AMOLED display, 6GB / 8GB of RAM and 128GB / 256GB of internal storage, at least if leaks are to be believed.

A 10-megapixel (f/1.9 aperture) camera will sit on the phone's front side, while the device will come with IP68 certification for water and dust resistance. Android 9 Pie will come pre-installed on the Galaxy S10e, while Samsung's One UI overlay will be included on top of it. Much like all other Galaxy S10 variants (Galaxy S10 & S10+), this smartphone will be announced on February 20 in San Francisco, during Samsung's Unpacked event.