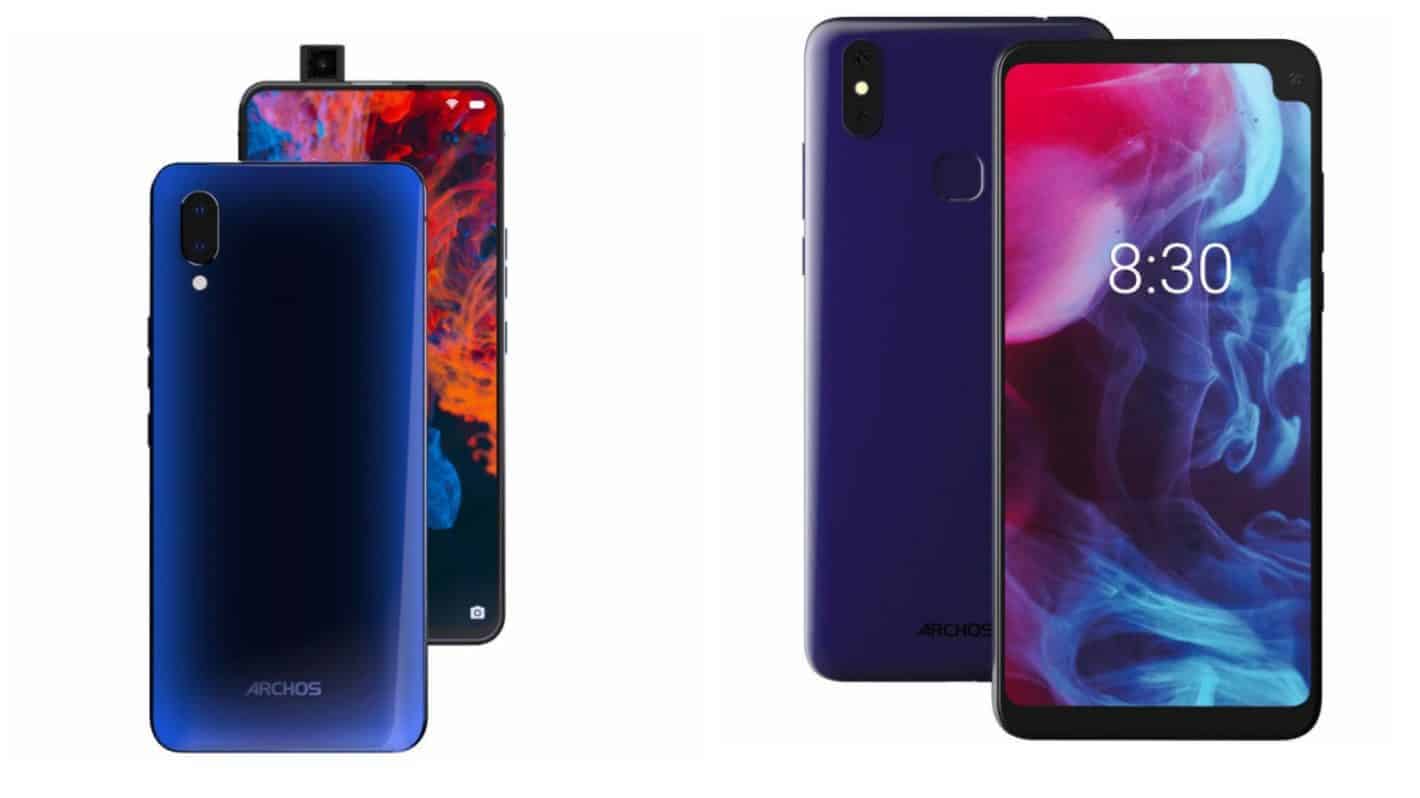 ARCHOS, a France-based smartphone manufacturer, has announced four new smartphones prior to the Mobile World Congress (MWC) in Barcelona. The names of those smartphones are the ARCHOS Diamond, Oxygen 68XL, Oxygen 63, and Oxygen 57. The ARCHOS Diamond is the most powerful of all four smartphones, but the ARCHOS 68 XL is arguably the most interesting one due to an odd top-corner display notch.

The ARCHOS Diamond is a smartphone which comes with a pop-up selfie camera, similar to the one on the Vivo NEX. The device includes two cameras on the back, and really thin bezels all around, while a "chin" below the display is also present. All the physical keys are located on the right-hand side of this handset, while the company's branding is included on the back.

The device features a 6.39-inch fullHD+ AMOLED display, while it is fueled by the Helio P70 64-bit octa-core processor by MediaTek. A 3,400mAh battery is included in the package as well, and it supports fast charging. Android 9 Pie comes pre-installed on this phone, while the device also offers two SIM card slots (2x nano SIM, hybrid setup).

16-megapixel (f/1.8 aperture, Sony's IMX499 sensor) and 5-megapixel (f/2.2 aperture) cameras can be found on the back of this phone, while a single 8-megapixel (f/2.0 aperture, Samsung S5K4H7 sensor) camera is included on its front side. A 3.5mm headphone jack is also a part of the package, while the device supports dual 4G VoLTE connectivity. The device also includes 6GB of LPDDR4X RAM and 128GB of expandable internal storage. The phone measures 158.7 x 74.1 x 8.6mm, and weighs 166 grams.

The ARCHOS Oxygen 68XL is easily recognizable due to its top-corner display notch. This may actually be the very first smartphone to sport such a notch, at least one of the first. Bezels are thin on this phone as well, while the "chin" below the display is present. This handset also comes with two cameras on the back, while it sports a rear-facing fingerprint scanner as well. All the physical buttons are included on the right-hand side of the device.

This phone features a huge 6.85-inch HD+ (1352 x 640) IPS display, while it is fueled by the Helio P22 64-bit octa-core processor. The device also includes 3GB of LPDDR3 RAM and 32GB of expandable storage. Android 9 Pie comes pre-installed on the phone, while the device supports two SIM card slots.

A 5,000mAh battery is included in the mix, while you will find an 8-megapixel camera on the back, in addition to a secondary VGA camera. A 5-megapixel camera is included on the front side of the device, while the phone supports dual 4G VoLTE connectivity. The device measures 173.5 x 71.55 x 8.95mm, and it weighs 214 grams.

The ARCHOS Oxygen 63 sports a rear-facing fingerprint scanner as well, in addition to two rear-facing cameras. A "chin" is present below the display, while the phone includes a small notch at the top of the display. Its physical buttons are in the same place as on other devices that ARCHOS announced, on the right.

The phone includes a 6.26-inch HD+ (1520 x 720) display, while it is fueled by the Unisoc SC9863 octa-core processor. The device comes with 4GB of LPDDR3 RAM and 64GB of expandable storage. Two SIM card slots are available here as well, while Android 9 Pie comes out of the box.

A 3,000mAh battery is included in the ARCHOS Oxygen 63, while the phone supports dual 4G VoLTE. On the back of the phone, you will find an 8-megapixel camera in addition to a VGA camera, while a 5-megapixel selfie camera is also included in the device. The phone measures 159.2 x 75.8 x 9.25mm, while it weighs 162 grams.

The ARCHOS Oxygen 57 resembles the Oxygen 63 handset, as it sports a similar-looking rear-facing camera setup, a rear-facing fingerprint scanner, a "chin" below the display, and it has a tiny notch at the top. This phone's notch is a bit different in shape than the one on the Oxygen 57, a teardrop notch, if you will.

The device includes a 5.71-inch HD+ (1520 x 720) LCD display, while it is fueled by the same processor as the Oxygen 63. The phone includes 3GB of LPDDR3 RAM and 32GB of expandable storage. Two SIM card slots are available here as well, while Android 9 Pie comes pre-installed too.

ARCHOS has announced that all four smartphones will become available in Europe starting in May, though an exact release date was not shared. The ARCHOS Diamond is the most expensive device that the company announced this time around, it is priced at €299. In order to get the Oxygen 68XL, you'll need to set aside €149, while the Oxygen 63 will cost you €129. The Oxygen 57 is the most affordable handset in this batch, and it costs €99.