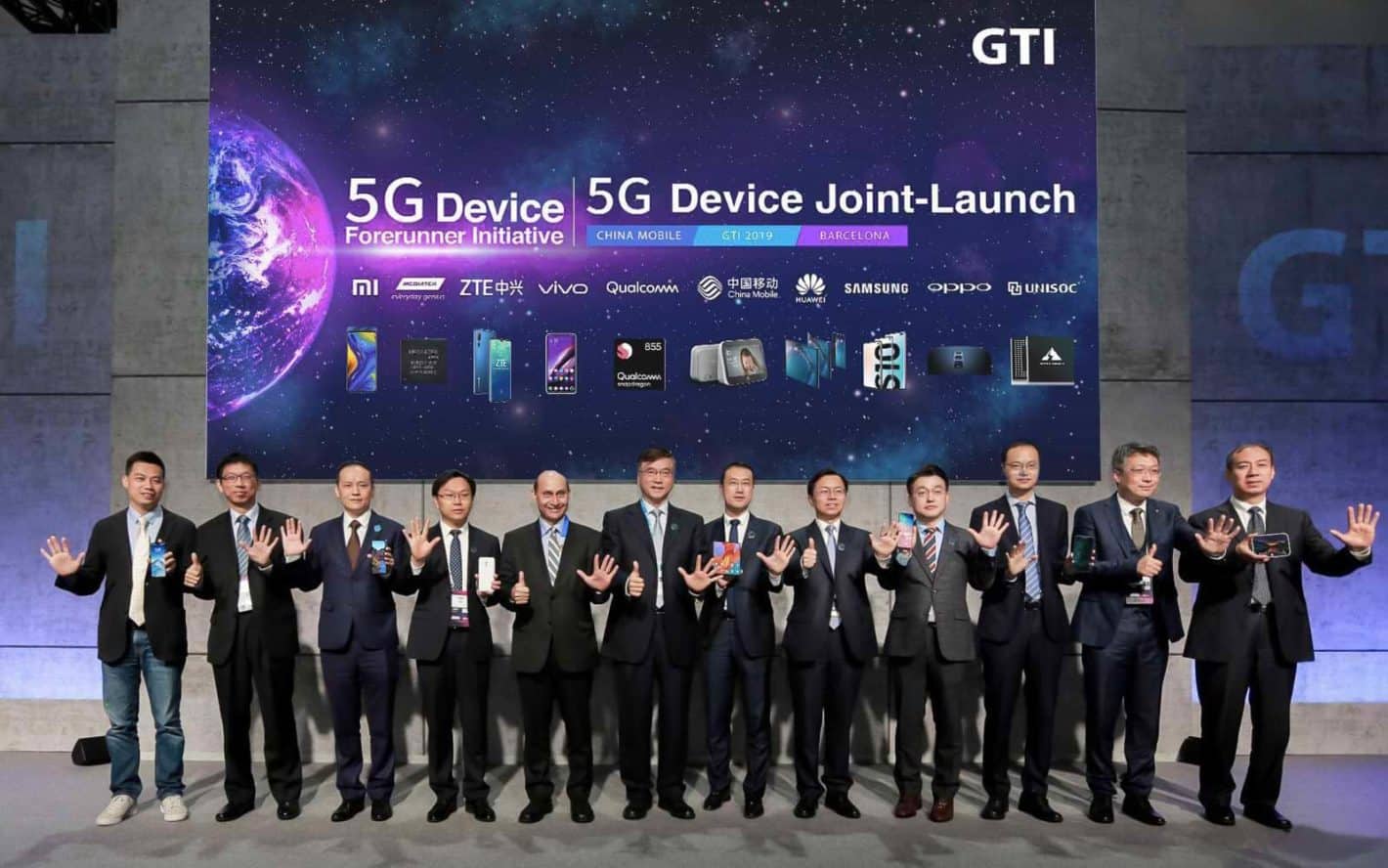 China Mobile and several other tech industry leaders joined up at the MWC 2019 GTI Summit this year to showcase the launch of China Mobile’s ‘first batch’ of 5G enabled handsets and related technology. Joined by representatives from Huawei, Vivo, OPPO, ZTE, Xiaomi, Samsung, Qualcomm, MediaTek, and Unisoc (Unigroup Spreadtrum & RDA), the group touted four chipsets and nine smartphones — many of which are expected to land in the first half of 2019.

As part of the ‘5G Device Forerunner Initiative’ launched in early 2018, the collective goal of the group is to quickly push 5G to the forefront by pooling resources across the industry and deliver at least one handset by 2019. That’s been accomplished now thanks to four new chipsets from Unisoc, MediaTek, Qualcomm, and Huawei’s HiSilicon. The group’s stated goal now is to promote the “prosperity” of 5G.

The new goal of the initiative, part of which is the launch of a new “5G New Frequency Band (2.6GHz) Special Promotion Group,” is to build on that progress over the next twelve months. Efforts will now be aimed at solving recurrent issues in the maturity of the communication capability of 5G, ‘differentiated values’, diversification of hardware, and the launch of low-cost solutions that work with next-generation networks.

To that end, the China Mobile-led collective of companies plans to release a whitepaper on 5G devices and continue to carry out joint tests for quality while also promoting continuous improvements to the experience of using 5G. That includes devices across both standalone and non-standalone networks.

The renewed effort being put forward from China Mobile’s 5G initiative comes amid the launch or announcement of a string of 5G handsets from China Mobile, Huawei, Vivo, OPPO, ZTE, Xiaomi and Samsung at this year’s MWC 2019 event. in Barcelona. It also comes alongside an increasingly tense battle between countries looking to be the first to deliver widespread access to the technology and an ongoing trade war between China and the west.

One example of the tensions being created is the continued distrust of Huawei’s 5G networking technology, with concerns centering about asserted risks to national security due to ties between the company and the Chinese government. That has resulted in companies choosing to cut ties with the company but also to more impactful circumstances such as various governments calling out the hardware manufacturer directly.

To dominate in an emerging industry

The newly renewed effort to centralize bids around 5G in partnership with China Mobile isn’t necessarily a direct response to the above-mentioned situations or similar. Regardless, they do provide a better position the company and its partners to exert more control over the rollout of 5G in regions of Asia and others where the devices will be sold.

That could easily extend to regions where the initial wave of handsets in question won’t be sold too. That’s feasible in part because of the influence the Chinese handset manufacturers and operators will have on the overall industry and the direction of development for components and experiences — as well as other 5G related technology.