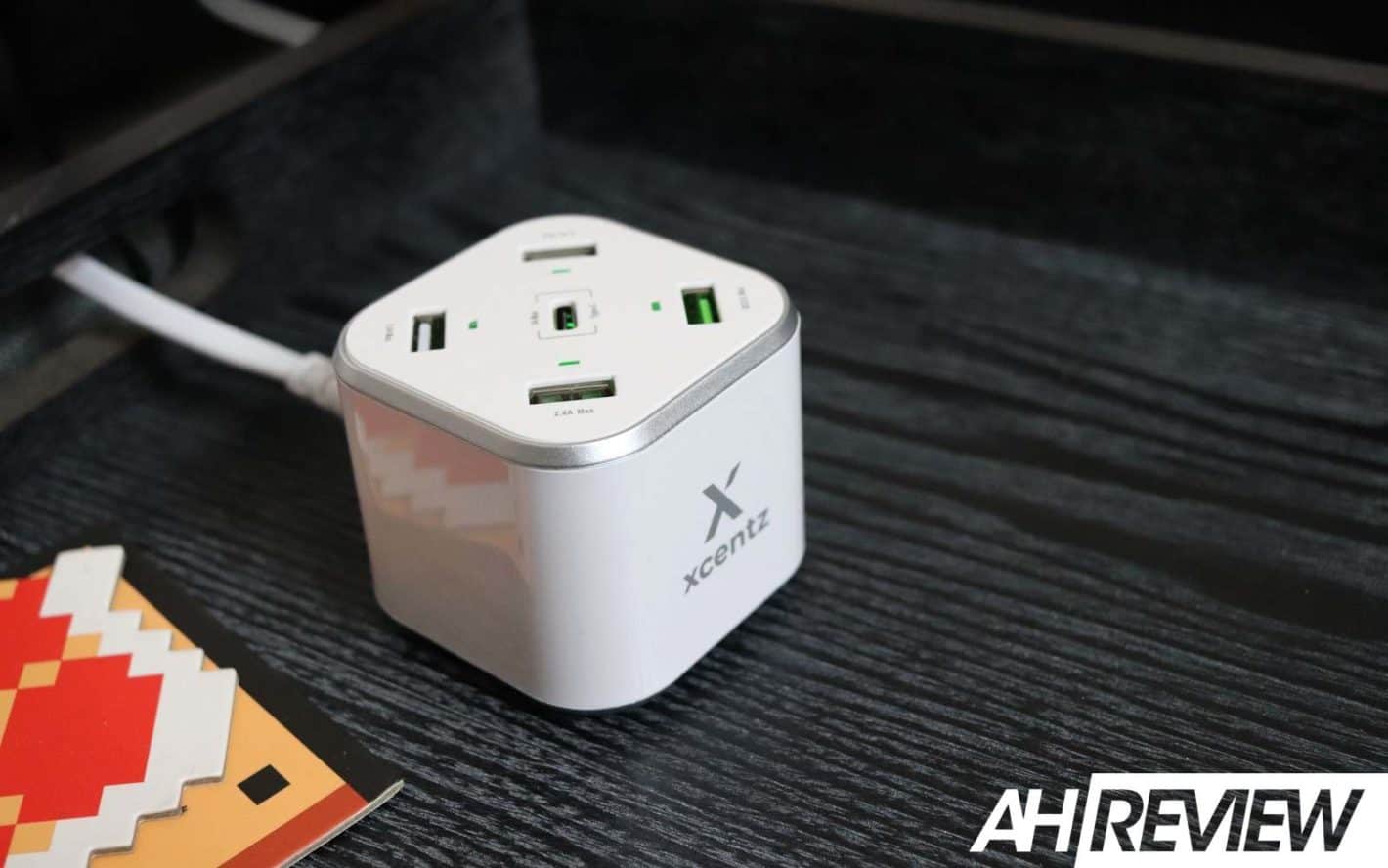 While Xcentz may not be the most well-known brand in charging accessories, its latest charging solution is worth a look for those needing to charge up multiple devices quickly all at once. Sold as the Xcentz 48W 5-Port USB Wall Charger for under $40, the accessories name provides almost all the information that might be needed to make a purchase decision.

That doesn't mean there's not still more to this 2.2 x 2.5 x 2.5-inch cube than initially meets the eye, despite the sparse inclusions. Opening the box reveals the cube itself, a user manual, and the cable required to provide power to the charging accessory. The minimal approach is key to this product's usefulness since it means this is a device that will power almost anything and can be put almost anywhere.

At first glance, the new Xcentz device is a straightforward white box with shiny beveled silver trim and a detachable four-foot cable for power. True to its portable nature, that weighs in at just 7.7 ounces. The brand is printed in bold silver on the front and five USB ports are embedded along the top, each with its own green-colored LED indicator to show that power is being received. Those are on all the time when power is being received so this device may not work well on a nightstand.

Each of the included plugs is clearly marked to avoid any confusion about which devices can be plugged in. Three are standard USB-A ports that pump out power at a maximum 2.4A while a fourth is Qualcomm Quick Charge 3.0 compatible. Those are arranged at an angle around the edge with the Quick Charge 3.0 port capable of charging at 3.6-6.5V=3A; 6.5-9V=2A; 9-12V=1.5A. The fifth USB Type-C port at the center provides a steady stream of power at up to 3A.

The exceptionally clean look of Xcentz charger is only made better by its compact size and solid build. Despite its minimal weight, holding the charger exudes a sense of durability. Obviously, throwing the charger around will damage it either internally or aesthetically but it doesn't feel like it's going to break easily at all.

A square-shaped rubber foot is has been included on the bottom, circling the entire lower surface. That ensures there's no slipping and accidentally knocking the device off a tablet is not likely to happen.

Similar attention to detail has been paid to the quality of the ports themselves, including the plug for the external cable. All of those fit their respective cable types snugly with no jiggle at all, giving the Xcentz 48W 5-Port Wall Charger an added layer of durability. There doesn't seem to be much possibility of anything coming loose or failing to work properly.

If the new Xcentz wall charger does break, the manufacturer offers an 18-month 'no questions asked' warranty standard with purchase.

The small size of this charger means that it can be placed just about anywhere, enabling homeowners or their guests to charge up a tablet, smartphone, or other compatible hardware quickly with minimal effort. We actually settled on placing the device in the middle of a room on a coffee tablet and supplied cables for guests to use. Since the charger only uses a single wall outlet, that freed up extra outlets for use on other household items.

Conversely, this would make for a perfect travel charger for those who don't want to use or don't trust the dedicated USB ports sometimes provided in hotel rooms or rental homes. It would be perfect for travelers who simply don't want to pack a lot of charging bricks for multiple devices too.

One other placement we tried was on a standard-sized work desk. Ordinarily, that surface would be mostly clear with the exception of various USB cables sticking out and a real mess of wiring behind the desk. Placing the charger there eliminated the mess behind the furniture and opened up other wall sockets for items that would have otherwise been left unplugged when not in use out of necessity.

There are obviously a lot of other uses that could be found for the Xcentz 48W 5-Port USB Wall Charger as well, thanks to the relatively tiny amount of space it takes up.

Even though only two of the ports charge at quick charging speed, we found that even the standard plugs were serviceable and charged a device up more quickly than expected. Exact figures are going to vary from device to device, making it any direct comparison difficult to accomplish. The speed of charging is enabled not only due to the constant 9A power delivery allowing a maximum charge rate but because of a feature called 'Advanced Smart xPower by Xcentz'.

Summarily, Advanced Smart xPower by Xcentz serves two primary purposes. First and foremost, the feature ensures that the wall charger itself is safe to use by keeping power delivery within set parameters based on the device being charged. Although this isn't a surge protector, that should also help minimize damage from surges or similar problems.

Second, the solution allows the charger to communicate with a smartphone or other device to deliver the maximum rate of power possible based on the port that's in use. By regulating power and adjusting amperage to the ports, Xcentz makes certain that each port charges to the best of its ability regardless of whether one port or all five are in use.

At a price of just $38.99 — or $27.99, as of this writing, while an ongoing sale direct from the company lasts — the Xcentz 48W 5-Port USB Wall Charger isn't cheap but isn't at all expensive either. It's just budget-friendly enough that one could put a unit or two in multiple rooms throughout the house or get one for the whole family when going on vacation to ensure everyone can charge up all of their electronics. On convenience alone, this is a wall charger that's just well worth the money.

UPDATE: this wall charger is also available via Amazon from the link down below. The device is currently priced at $29.99 on Amazon, but you can get it for only $23.99 if you utilize the provided coupon code.