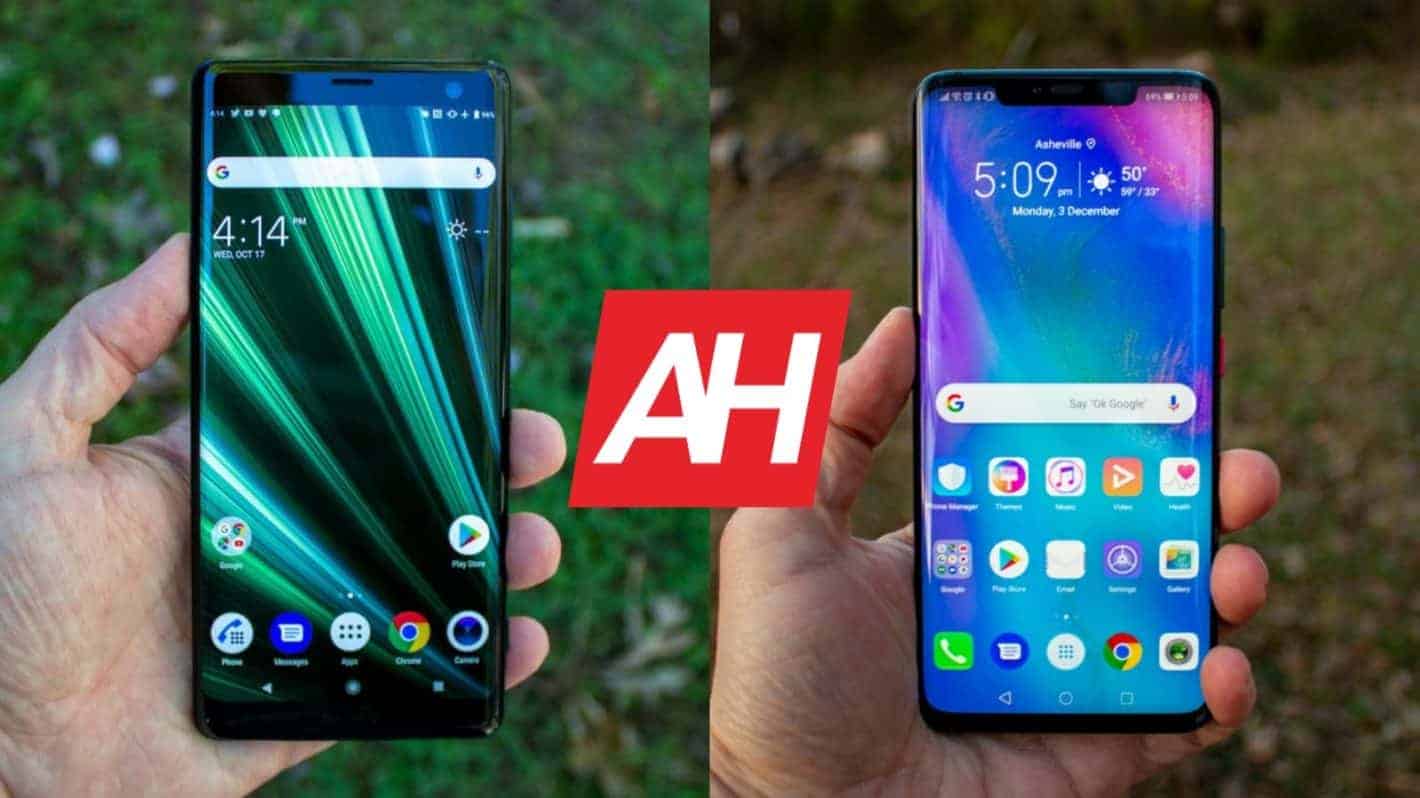 The Xperia XZ3 and Mate 20 Pro are Sony's and Huawei's current flagship devices, respectively. These two phones are quite different, though, so it makes sense comparing them, as many of you are probably still wondering which of the two to get. As is the case with every smartphone, there are pluses and minuses when it comes to both phones, and before we begin, it is worth noting that both of these phones are quite compelling, and just because a phone wins a particular category in our book, does not mean that it's a better option for you, as both of them are quite compelling across all of these categories, so the difference is not that big at all. That being said, let's kick things off with specifications, as per usual.

Both the Sony Xperia XZ3 and Huawei Mate 20 Pro are made out of metal and glass, but they do feel a bit different in the hand, one compared to the other. The Xperia XZ3 is more curved than the Mate 20 Pro on the back, and even though both devices offer quite a bit of curves, the Xperia XZ3 feel a bit slippier. Those curves are not the only reason why, though, as the Mate 20 Pro comes with some sort of coating on the back which makes its glass less slippery than on most other phones in the market. The Xperia XZ3's rear-facing fingerprint scanner is a bit too low for our liking, as it's basically in the middle of the phone, but that's something you get used to. The two devices are almost equally tall and wide, while the Xperia XZ3 is a bit thicker. The Mate 20 Pro does offer a larger display, though, which is a testament to how thin its bezels are, considering that the two devices are almost identical in terms of footprint. The Xperia XZ3 offers a cleaner-looking front side, as it does not sport a display notch or anything of the sort, while a display notch is rather noticeable on the Mate 20 Pro. All in all, the design is always a matter of personal preference, it all depends on what you prefer, and if you mind the notch or not. We will give this one to the Mate 20 Pro, though, as it's considerably less slippery, it packs a larger display in the same footprint as the Xperia XZ3, and it doesn't sport a rear-facing fingerprint scanner which is oddly-placed.

Both of these phones come with OLED panels, the Xperia XZ3 features a 6-inch QHD+ (2880 x 1440) with an 18:9 display aspect ratio, while the Mate 20 Pro offers a 6.39-inch QHD+ (3120 x 1440) AMOLED display with a 19.5:9 display aspect ratio. The Xperia XZ3's display is protected by Corning's Gorilla Glass 5, while we're not certain what version of Gorilla Glass does the Mate 20 Pro sport, but it's quite probably also Gorilla Glass 5. Both phones support HDR content, and both of these displays are quite impressive, if we're being honest. Both displays are extremely crisp, colors are nice and punchy, while viewing angles are also spot on, distortion is not present in either case. You can fine-tune both displays to your liking, and quite frankly, there's nothing to complain about here. If you prefer a larger and taller display, the Mate 20 Pro is a better choice, while the Xperia XZ3 is a great alternative. These two phones are so closely matched in this category, that we cannot pick a winner, quite frankly, so it's a tie.

The Xperia XZ3 and Mate 20 Pro are beastly smartphones in terms of specs, and the same goes for performance as well. Neither of these two devices comes with stock Android, not even close to it, but both Android overlays are really, really good at this point. Huawei's EMUI iteration offers more customization, that's for sure, but Sony's iteration has its benefits and customizations as well, not to mention Remote Play if you're a PlayStation enthusiast. In terms of sheer performance, they're both extremely smooth and closely matched, and while a tiny hiccup here and there is possible, they're amongst the best performers out there, which is not that odd considering the sheer power both of these smartphones offer. The two phones are fueled by considerably different processors in the Snapdragon 845 and Kirin 980, but as already said, they're closely matched in day-to-day performance, which is the only thing that really matters… therefore, this category will end with a draw as well.

Now, if you ask someone who never used either of these phones, or isn't really tuned into the mobile industry, that person may consider Sony to make the best camera smartphones, just because Sony is a synonym for digital cameras. Well, that's not really the case, as many of you probably already know. The Xperia XZ3's camera is really good, far from it, but it's not as good as what Huawei came up with. The Xperia XZ3 comes with a single 19-megapixel camera on the back, while the Mate 20 Pro includes three rather compelling cameras on the back, along with Leica's lenses. In daylight, both cameras perform admirably, and the Xperia XZ3 even offers slow-motion video that the Mate 20 Pro cannot match in terms of output, even though it comes close. That being said, the moment light becomes an issue, or you stumble upon a more difficult situation to shoot, the Mate 20 Pro will show its true colors, as it really is a compelling camera smartphone. The Mate 20 Pro comes with a special mode for low light, if you ever end up needing more light than the auto mode can provide, and results are quite good. On top of everything, the Mate 20 Pro offers wide, ultrawide, and telephoto cameras on the back, so it offers more versatility than the Xperia XZ3's single shooter, even though the Xperia XZ3 can also shoot some nice-looking shots, even in low light. The Huawei Mate 20 Pro is the winner here, as this is one of the best, if not the best, camera smartphones on the market.

We've said it in the beginning, and we'll say it again, both of these phones are quite compelling, and chances are you'll be happy with either one of them. The Mate 20 Pro pulls ahead in some categories, that's for sure, but they're closely matched. It is also worth saying that neither of the two phones offer a 3.5mm headphone jack, but they do offer stereo speakers. The Xperia XZ3 comes with 24-bit/192kHz audio, while the Mate 20 Pro offers 32-bit/384kHz audio output. Both phones have active noise cancellation, while the Xperia XZ3 also comes with dynamic vibration system, if that's important to you. The Mate 20 Pro includes an in-display fingerprint scanner, which is futuristic and cool, but the Xperia XZ3's capacitive fingerprint scanner on the back is still faster, even though its placement is rather odd. That's pretty much it, the Mate 20 Pro wins this overall, but both phones are really, really good, and you should consider both of them if you're buying a flagship Android smartphone.