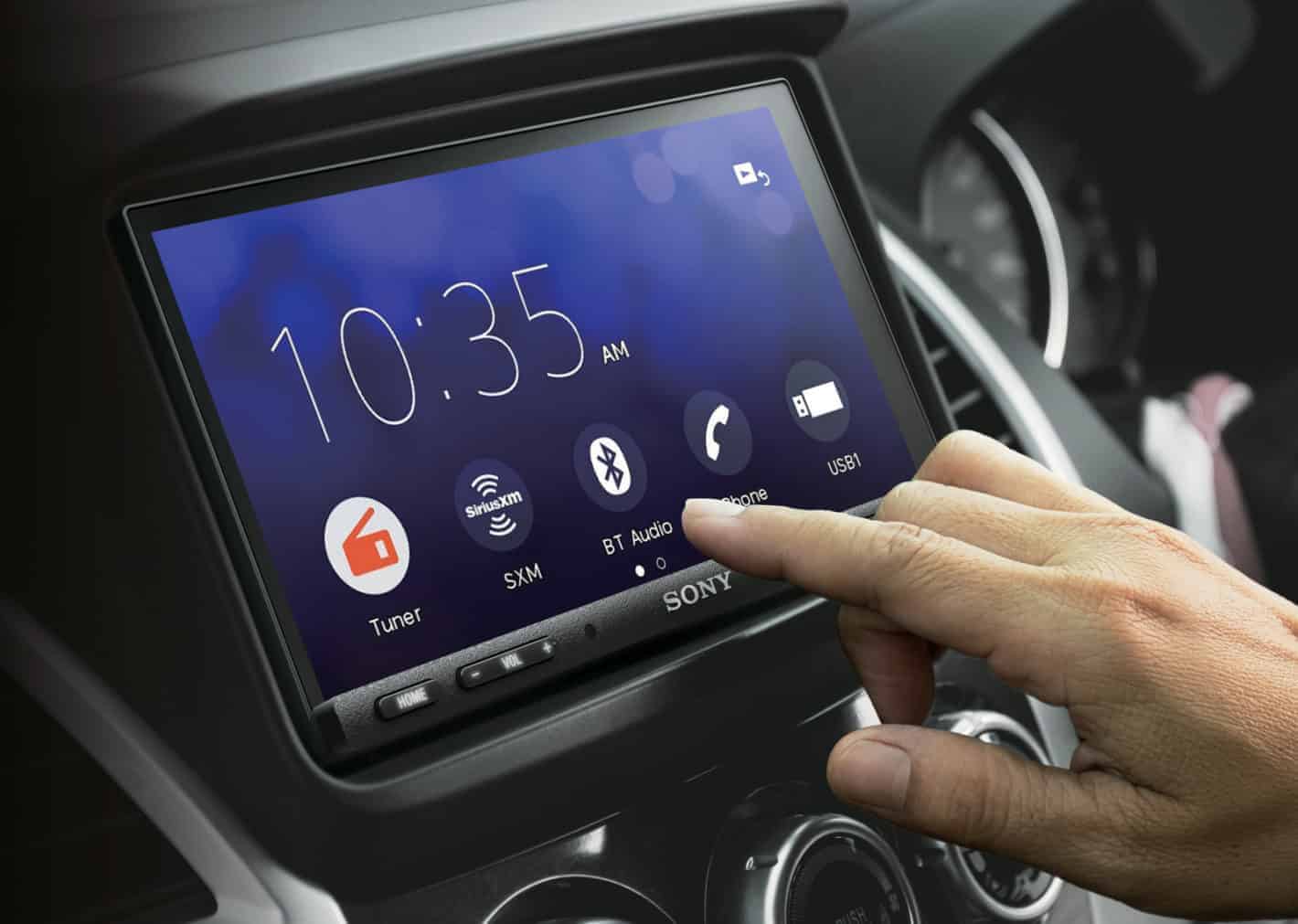 Sony has brought a new head unit to Las Vegas this year, and announced the AX7000 Android Auto-compatible head unit at CES 2019. According to Sony, this one features the latest smartphone connectivity – and that includes Android Auto, Apple CarPlay, as well as Bluetooth for those that want to go old-school. But it will also upgrade the terrible audio that shipped in your vehicle – especially, if you have an older car. Sony has 100W of power built-in, along with a Class-D amplifier that is going to bring audio to life. There is a 6.95-inch nearly bezel-less display here, that is going to sit flush in your dashboard. it will look like the display was built into your car, and not something that you purchased and had installed after-market. Sony has not mentioned the resolution or what type of display this is, but it is likely a HD display as you don’t need a 4K display in your vehicle and that would also take more power from the vehicle. The AX7000 will also wake up much faster than the AX100 did, about 2.5x faster. So that when you get in the vehicle and turn it on, you won’t need to wait long to get Android Auto open and be on your way.

Sony’s chief operating officer for North America, Mike Fasulo stated that “you don’t need to purchase a brand new car to enjoy the latest voice-activated search and navigation functions, bezel-less touchscreen interface and streaming music in your automobile. The AX7000 combines smartphone connectivity with unique Sony audio enhancements such as EXTRA BASS, making it easy for users to access and enjoy their favorite music on a premium in-car audio platform.” Fasulo is pretty proud of the AX7000, especially compared to the competition. Other head units out there are focusing on the amount of features and services they can add – like GPS, SiriusXM, rear cameras, etc. – while Sony is focusing on giving you great audio for your vehicle, and smartphone connectivity without costing an arm and a leg.

This is not Sony’s first Android Auto head unit, but it has improved the specs under-the-hood to provide better integration as well as better performance. With Android Auto, you are getting the convenience of Google Assistant in your vehicle, and it does work hands-free. Allowing you to simply say “OK Google” and give it a command. This works for things like navigation, finding where the nearest gas station is, and even for controlling your smart home products at home. You could ask Google Assistant to turn on the lights at home before you even get there, for added convenience. Android Auto of course has a pretty simple interface, and it is the exact same on every vehicle. The only downside to this head unit from Sony is the fact that it does not support Wireless Android Auto. Meaning that you will need to plug your smartphone in when you get into the vehicle to bring up Android Auto. The AX7000 does have two integrated USB ports however, which makes it simpler to do so.

For many, the vehicle is shared with your significant other, or perhaps your kids (if they are old enough to drive), so Sony has made sure that this AV receiver will work with those using other platforms. Apple CarPlay is also included, allowing iPhone users to plug in their phone and get a similar experience to Android Auto. Those that just want to use music, well Bluetooth is also available, so you can play your favorite music from Spotify, Google Play Music, or even your own personal library.

Sony brings its’ popular EXTRA BASS into your vehicle

Sony has always been known for its audio quality when it comes to Bluetooth speakers and headphones. After all, it is also a record label, so it wants the music you are listening to from their artists to sound as good as possible. And now it is bringing one of its most popular features over to the car. That is EXTRA BASS. Now in older AV receivers, this was known as MEGA BASS, but Sony has decided to stick with one name for this across all of its products. With EXTRA BASS, you are going to get some really deep bass, that will blow you away. If you listen to music with a lot of bass in it, you will definitely feel it. There is a two-mode boost here so that you can get the sound that sounds better to you. Whether that is boomy bass, or slightly less bass.

As far as the specs go, audio-wise on the AX7000, there is 100W of power out of the High Power Built-in Class-D Amplifier. Sony notes that with other head units, if you play sound to loudly, it will clip off the signal peaks and distort it, but with this Class-D Amplifier that is built-in, that is not an issue. There is also a 2-ohm speaker/subwoofer Loadiv here, so you can use multiple speakers per channel in your vehicle. When it comes to playing music, the AX7000 does support FLAC audio files, allowing for some really great sounding, lossless music while you’re driving to work. Essentially if you are an audiophile, then this is the head unit you are going to want to buy.

Unfortunately, Sony has not set a price yet for the XAV-AX7000 Car AV Receiver just yet. However, Sony did mention that it should be available in North America in the “summer of 2019”. So the release is still a bit out there, that gives Sony time to get the pricing in order. In the past, its head units have been relatively inexpensive, coming in at under $500. Compared to those offered by Pioneer and JVC-Kenwood, that is actually fairly cheap. Sony did not mention other markets – though, seeing as CES takes place in North America, it’s not surprising to see it only mention that market today. Other markets will likely be announced as we get closer to its launch. But expect it to be available in all markets that currently have Sony’s head units.