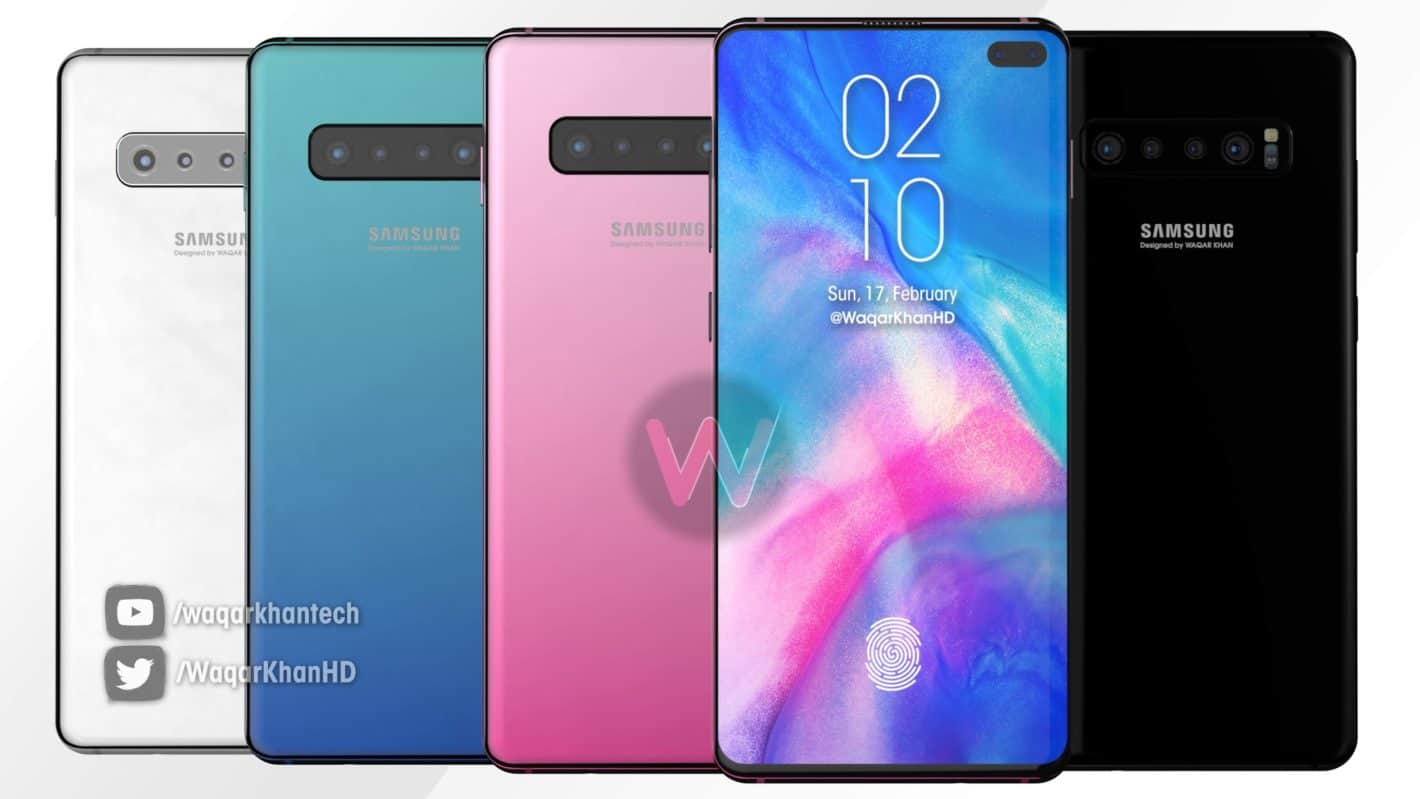 Another concept render depicting how the Samsung Galaxy S10+ is expected to look emerged online, showing a handset with an unprecedented design and two unique camera setups featuring half a dozen sensors in total. The video below reveals several possible variants of the upcoming Android flagship, with their key characteristic being a new Infinity Display, a Super AMOLED panel with a 19:9 aspect ratio and a top-right-corner cutout housing a dual-camera setup.

The rear plate of the Galaxy S10+ concept sports a quadruple-sensor system with two telephoto lenses and another pair of wide-angle glass modules, as well as a dual-tone LED flash and a heart rate monitor. Samsung's signature back-facing fingerprint reader has now been replaced with an in-display scanner, and one that's expected to be of the ultrasonic variety, i.e. be significantly more accurate, consistent, and quicker than existing solutions implemented into devices such as the Huawei Mate 20 Pro and the OnePlus 6T.

One thing the author of the newly sighted concept likely overdid is the screen-to-body ratio of Samsung's next high-end Android phablet. While the device will almost certainly be an improvement over the Galaxy S9+ in this regard, it's unlikely to completely lack a top bezel like the new renders imply. The said element should instead only be somewhat thinner, largely thanks to the inclusion of a display cutout for the two front-facing cameras. Samsung is understood to have opted for the said hole in order to avoid commercializing a display notch, a polarizing design feature of contemporary handsets that the company has been mocking for close to two years now, ever since Apple embraced it with its iPhone lineup.

The Super AMOLED panels utilized by the Galaxy S10 range are expected to be advertised as the Infinity-O family, with the "O" being a reference to the shape of the front-facing camera cutout. Samsung is also working on Infinity-V and Infinity-U modules which somewhat resemble the screen of the Essential PH-1, with both being likely to be commercialized in the coming months. The Infinity-O panel will be made in several variants, two of which will feature Samsung's signature Edge Display. The final take on the concept will mark the company's first return to flat flagship displays since early 2016 and the Galaxy S7. That particular module is rumored to be part of the most affordable Galaxy S10 model.

The Galaxy S10 range should also debut as Samsung's largest ultra-premium smartphone family to date, including no fewer than four main devices, all of which are likely to be offered in at least two memory configurations. Besides the Galaxy S10 Lite, Galaxy S10, and the Galaxy S10+, Samsung is understood to be preparing a special edition of the largest model featuring support for the fifth generation of mobile networks. The device in question will only be available with Qualcomm's Snapdragon 855 chip accompanied by the Snapdragon X50 modem, whereas the rest of the range will also be manufactured in variants utilizing Samsung's own Exynos 9820 silicon. As was the case in recent years, the Exynos versions of the devices will be sold internationally, whereas the one sporting Qualcomm's system-on-chip are likely to remain exclusive to the United States, Canada, Mexico, and China. Naturally, that's not accounting for the 5G-enabled Galaxy S10+ model which will also be sold in South Korea.

Samsung's rivals aren't just carefully observing what the company has in store for 2019 but are reportedly already working on their own products equipped with display holes in order to eliminate notches and embrace what's likely to be the next major design trend in the mobile industry. Samsung already launched one such device in the form of the Galaxy A8s mid-range last month, whereas Huawei followed suit in a matter of days by unveiling a similar-looking Nova 4 series.

As the world's largest smartphone manufacturer, Samsung has been setting design and functionality trends for many years now, having most recently done so with a move to a relatively bezel-free aesthetic started with the Galaxy S8 lineup in early 2017. While it fell behind in certain R&D aspects such as mobile photography wherein Huawei beat it in the triple-camera department last year, Samsung is now doubling down on its innovation efforts in order to account for some of the commercial momentum it lost in 2018 seeing how neither the Galaxy S9 nor the Galaxy Note 9 lines sold particularly well, as per the company's own admission.

The Galaxy S10 family is hence expected to make little to no compromises regarding looks and performance, particularly when it comes to the 5G-ready Galaxy S10+ model which is rumored to offer up to 8GB of RAM and 512TB of flash memory. The new devices will also ship with Samsung's custom implementation of Google's Android 9 Pie, officially called One UI. The in-house operating system places a large focus on single-handed use and streamlines many aspects of Samsung Experience 9.5 while also debuting support for gestures, as well as new optimizations meant to make it even more consistent.

The Galaxy S10+ is rumored to be powered by a 4,000mAh battery, with previous reports indicating the Android flagship range won't just support wireless charging but will actually be able to refuel other devices without any wires being involved. Whether that means pass-through wireless charging will be part of the package remains to be seen, though the move at the very least suggests Samsung expects wearables to become much more ubiquitous in the near future. Battery still isn't an area where Samsung is looking to make an aggressive innovation push anytime soon as the company still fears a repeat of the Galaxy Note 7 fiasco, one industry insider claimed earlier this month. The Galaxy S10 series should be officially announced as part of this year's edition of Barcelona, Spain-based Mobile World Congress which is scheduled to open its doors to the public on February 25. Samsung is hence expected to start retailing the new Android flagships by late March, followed by a two- or three-week pre-order period which will likely see the introduction of many purchase incentives for early adopters.