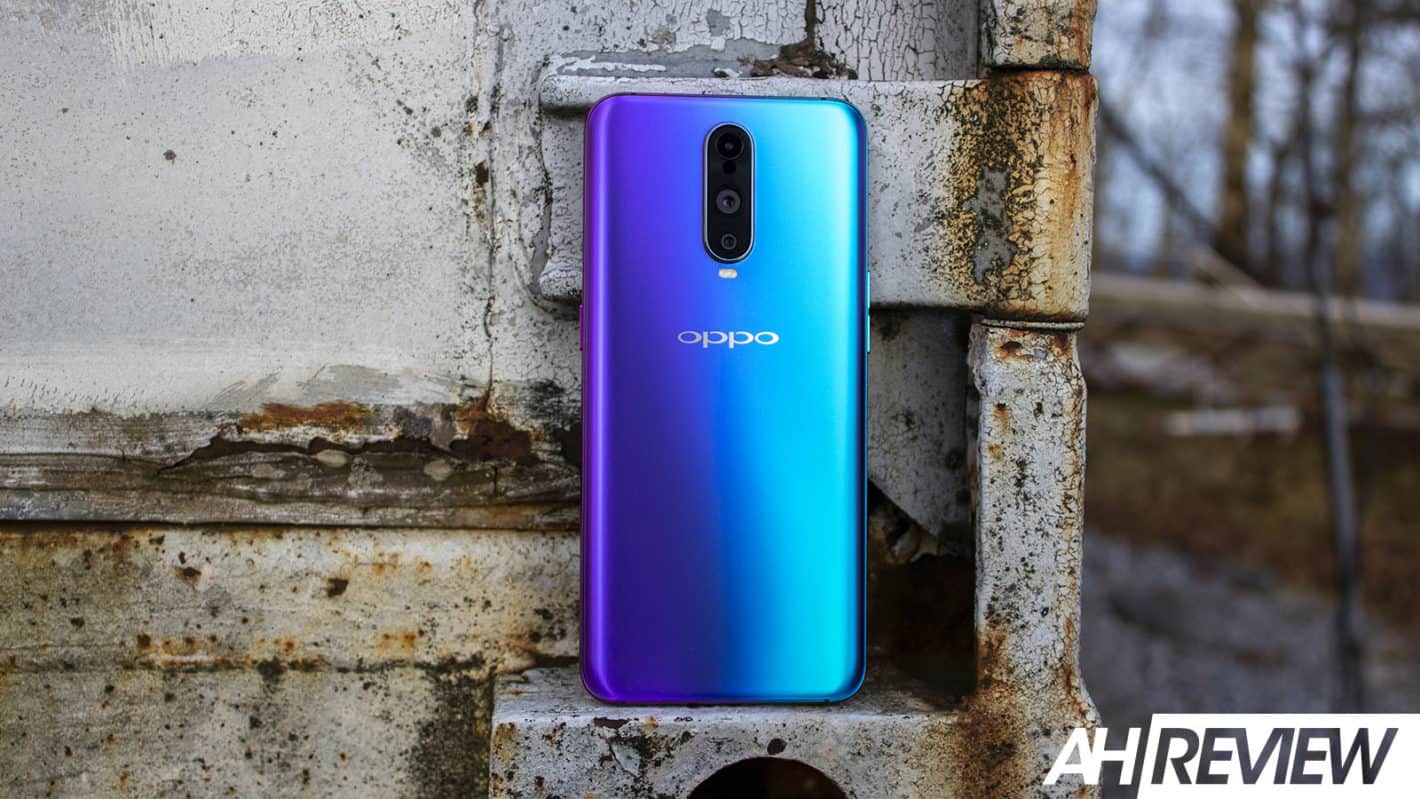 What You Need to Know

There's no denying the same DNA runs through both OPPO's R series and the same-generation OnePlus flagship, but OPPO is looking to further differentiate its latest smartphone with a few eye-catching ways. The most obvious difference between this and the OnePlus 6T, which shares an identical body design, is the brilliant color-shifting present on the fogged-glass back. OPPO isn't going for boring with this phone, that's for sure, and the purple-to-teal gradient is sure to not only catch the eye of plenty as you use your phone daily but it sure to get plenty of second glances of your own as you regularly take it out of your pocket or bag. The design and color scheme of the OPPO R17 Pro is nothing short of stunning, and it does so while being unique and sleek as well. It's a metal and glass sandwich, like many smartphones are nowadays, so while it's going to be more fragile than the metal phones of yesteryear, OPPO includes a case and screen protector in the box for protection without having to buy anything additional.

While there's no wireless charging on this phone, OPPO has built-in its own proprietary Super VOOC technology that debuted with Summer 2018's OPPO Find X Lamborghini Edition. This ultra-fast charging technology is sure to blow minds as it will charge the phone to 40% in a whopping 10 minutes and continue to charge near this rate until the phone's battery is full. Packing in dual 1,850mAh batteries, the R17 Pro utilizes the included Super VOOC charger to fully charge the phone in under half an hour, meaning no matter how low your battery is, a few minutes' charge will absolutely get you through the rest of the day, without question. This makes the R17 Pro the fastest charging phone on the market next to the special edition of the Find X Lamborghini edition with the added advantage that it's ⅓ the price of that phone.

OPPO is also upping its camera game with the R17 Pro, including higher quality optics and sensors than ever, as well as a brand new Time-of-Flight (TOF) 3D camera. The R17 Pro is the first camera in the industry with a TOF 3D camera, which is a new type of camera that's designed specifically to read depth information on objects. The implications for TOF cameras are wide-ranging, and Sony themselves is even very excited about the future of such sensors, as they can provide significant benefits when it comes to better and more accurate focusing, more accurate portrait mode-style shots, and the ability to better use AR functionality in all apps and services. For the time being, however, OPPO is only utilizing the TOF camera for scanning real-world objects and turning them into custom 3D virtual objects on the phone. This use is super limited, to say the least, and while it's amazing to see such innovative technology on a phone that doesn't cost an arm and a leg, the actual implementation is very weak.

The rest of the camera experience is nothing short of incredible though, something that's owed both to excellent hardware and software. OPPO includes a fantastic 25-megapixel camera up front in the new teardrop notch, which is a smaller notch than ever, and this camera does a phenomenal job of creating quality selfie shots in any lighting condition. Per usual, the rear cameras are more of a showcase for quality though, particularly because OPPO is utilizing the same amazing dual-aperture technology that Samsung includes on their high-end Galaxy S9, S9+ and Note 9 phones. The main 12-megapixel camera already includes some nice and large 1.4-micron sized pixels, but the ability to move between f/1.5 for low light and f/2.4 for good lighting is a blessing all around. Lower f-stop lenses are known for their distortion, particularly on smaller smartphone lenses where things look blurry or out of focus the closer you get to the edge of the image.

The ability to choose f/2.4 automatically or manually for any given scene means you can get, essentially, distortion-free photos, and the phone can move to the lower f/1.5 to suck in considerably more light when needed at the expense of a bit of distortion. Typically, lower light scenes won't show distortion as well, which means this f/1.5 lens will be far more of a positive point than a negative one. In addition to having a lens and sensor that takes excellent low-light shots in auto mode, OPPO is introducing a new Night Mode with the R17 Pro, one that works more like Google's Night Sight mode than Huawei's Night Mode. This means that OPPO's method will work well in super low light shots when movement exists, while some other manufacturer's methods utilize long exposure shots, which end up creating blur in areas of movement.

The biggest downsides to the OPPO R17 Pro include the lack of a 3.5mm audio jack on the device, lack of wireless charging, and vibration motors that don't feel as high-quality as ones from companies like Samsung, LG, or Google. It also doesn't ship with the latest version of Android, if that's of any particular concern, but OPPO typically does a good job of keeping up with security updates on a quarterly basis. As of this writing, the phone was on the October 2018 patch, and a big update is scheduled for the end of January, which is going to bring the TOF camera scanning functionality, as well as newer security updates. While the idea of being behind on a major version of Android is a concern to some folks, most OEMs provide their own versions of Android that are considerably more feature-rich than Google's base version. OPPO's own ColorOS 5.2 brings with it a handful of new features, a minor visual refresh and plenty of speed along the way, so it's unlikely you'll be missing anything noteworthy from Android 9 Pie in the meantime.

OPPO is pricing the R17 Pro higher than the sister OnePlus 6T flagship in all markets its sold in, yet it seemingly features a less powerful processor on-board than that phone. The reality is that, in real-world situations, there's no palpable difference between the performance of the Snapdragon 710 inside the R17 Pro and the Snapdragon 845 in other flagship phones released in 2018. Benchmark results will, of course, show otherwise, but the 1080p+ resolution of the screen keeps processing down when compared to higher resolution displays, and the 8GB of RAM means multi-tasking won't feel any worse or slower than what you'd experience on a more powerful phone. OPPO also makes up for the cost with the inclusion of the fastest charging in the land, some of the best cameras on the market, regardless of price, and tons of great features in ColorOS.