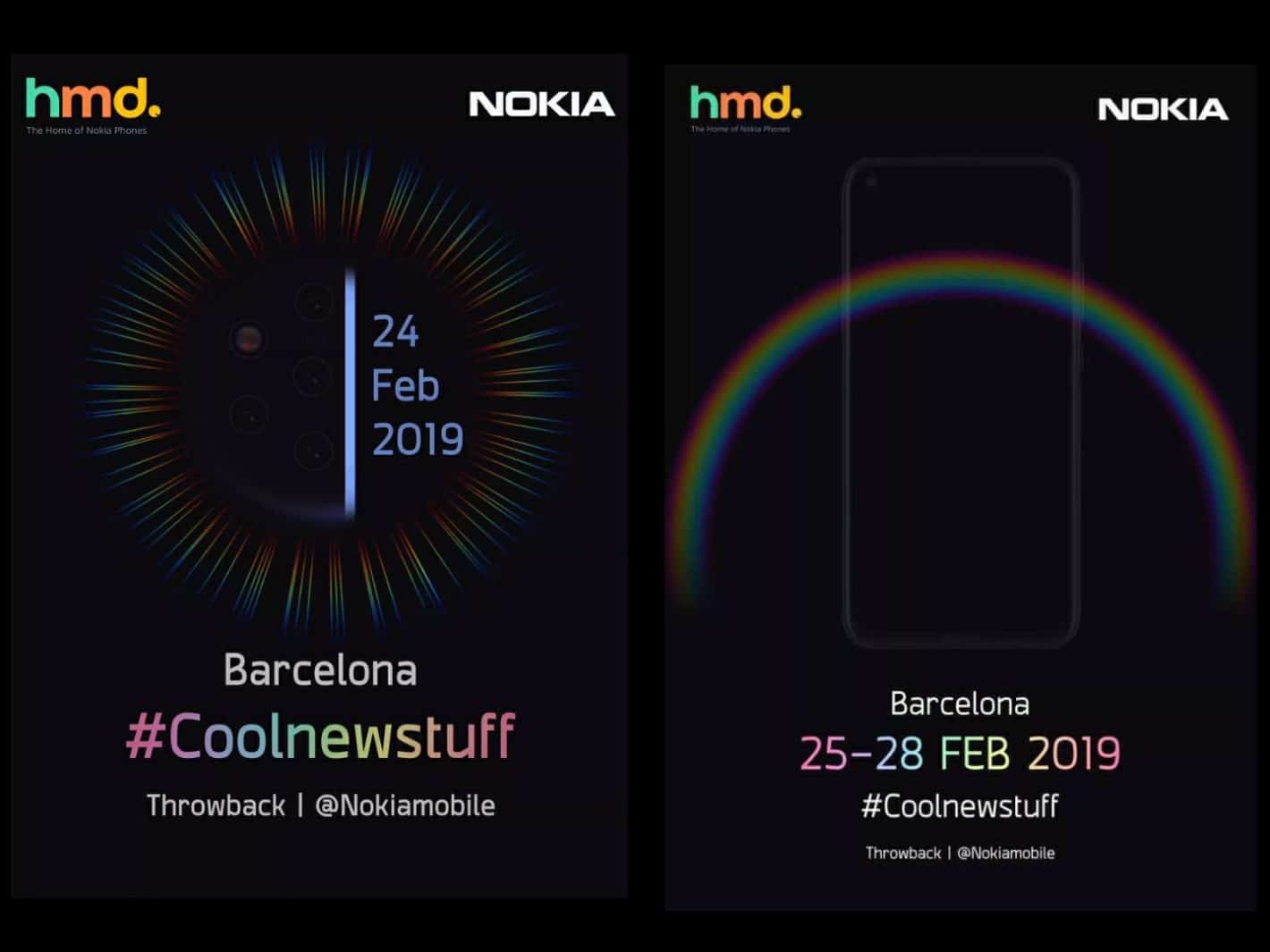 A couple of days ago, HMD Global's Chief Product Officer, Juho Sarvikas, revealed when will HMD Global's MWC 2019 press conference take place, and now some information surfaced which more or less confirms that the Nokia 9 PureView will be announced at MWC 2019 in Barcelona at that very same presser.

Now, this information surfaced in form of two images that are circulating online, and it seems like they are actually two different invites for the same event. Both of those images are included below; the first shows not only the date of the event, February 24, but also reveals part of the penta-camera setup on the back of the Nokia 9 PureView, and that clearly confirms that the phone will be announced during the event. Both the date and that partial camera setup are presented inside an eye / camera lens.

The second image that you will spot down below seems to suggest that the Nokia 9 PureView will not be the only device that will launch during that event, or at least that the Nokia 9 PureView's design that leaked is not accurate (which is highly unlikely). This image suggests that one of the phones that HMD Global will announce will sport an in-display camera which will sit in the top-left corner of the phone's display. Now, this camera will either be included in the Nokia 9 PureView, which means that the leaked design is completely off, or that the company plans to introduce a second phone at MWC 2019. Considering that February 24 is not mentioned in this invite, but instead, it says February 25 – 28, chances are that this image teases the Nokia 8.1 Plus, more on that later.

The Nokia 9 PureView, according to leaked images, will be made out of metal and glass, it will sport seven "rings" on the back, and five of them are reserved for cameras. The sixth ring is there for an LED flash, while the seventh one is reserved for some sort of a dual sensor, perhaps the laser autofocus and something else, we'll just have to wait in order to find out.

Now, as far as the phone's front side is concerned, the Nokia 9 PureView is actually expected to ship without notches and without display holes, unlike most other flagships out there. The phone will sport some bezel above and below the display, but those bezels will not be thick at all, though they will be thicker than bezels on most other flagship handsets, due to the lack of a notch / display hole.

The Nokia 9 PureView will be fueled by either the Snapdragon 845 or 855, though both variants are rumored, so both of them may become official at some point. Android 9 Pie will come pre-installed on the phone, and the company will include "PureView" tech in this device, as its name says. The phone will ship with at least 6GB of RAM, while a large battery is also expected, and a display that is at least 6 inches large (in diagonal).

The only HMD Global's smartphone with display camera hole that surfaced thus far is the Nokia 8.1 Plus. That handset will be made out of metal and glass, while it will sport thin bezel, and two vertically-aligned cameras on the back. The device is said to sport a 6.22-inch fullHD+ display, a 3.5mm headphone jack, and ship with stock Android as part of Android One project, which actually goes for all other Nokia-branded smartphones that arrived in the last year.

The device will include ZEISS lenses, and the leak suggested that it will sport a rear-facing fingerprint scanner. The Nokia 8.1 Plus is expected to measure 156.9 x 76.2 x 7.8mm, and that's pretty much all the info that we have at the moment, as the rest of its specifications are still a mystery.