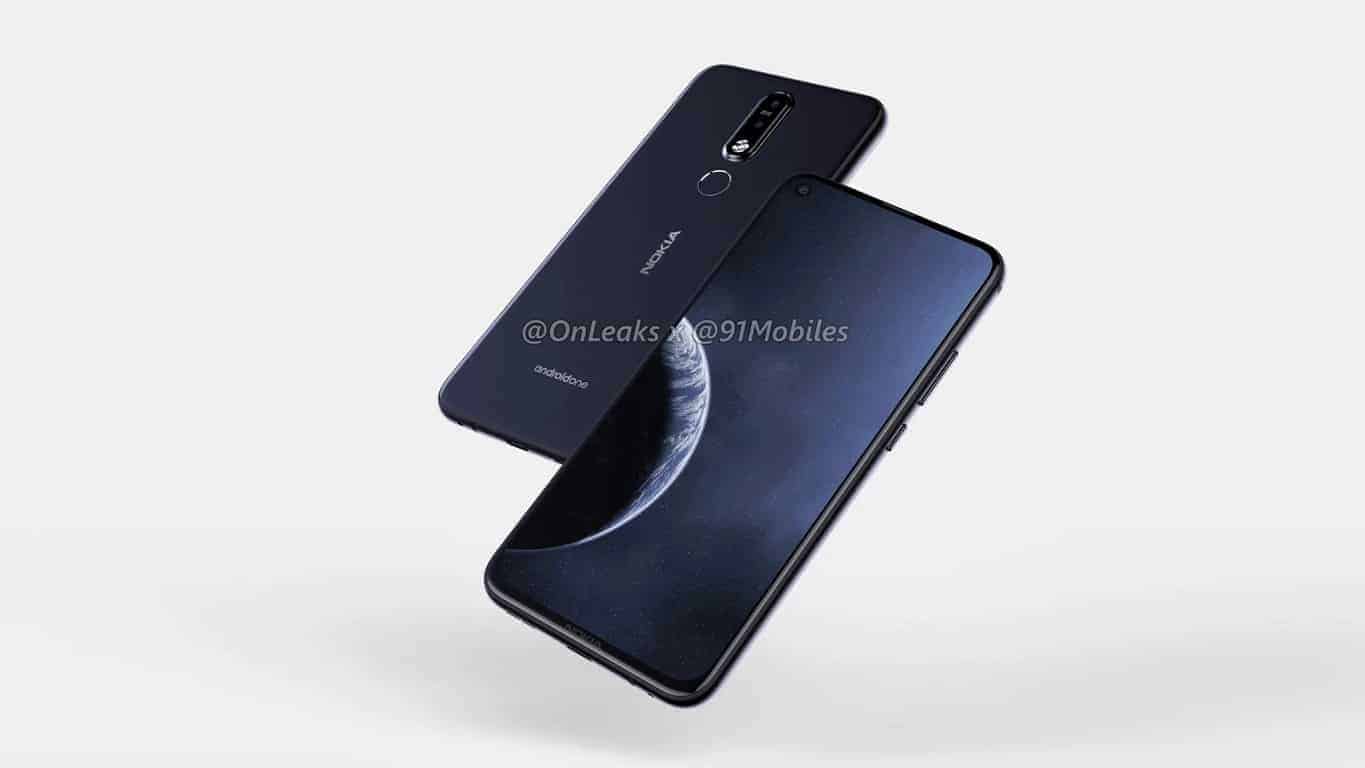 Renders of the Nokia 8.1 Plus have been released, and it shows that the upcoming smartphone offering of HMD Global will feature a display hole, a dual rear camera setup, and a rear fingerprint sensor. The renders show that the Nokia 8.1 Plus will feature a near bezel-less screen, which is made possible by the introduction of a display cutout placed at the upper left-hand corner of the handset. The screen has a size of 6.22-inches and a resolution of full HD+. However, the images suggest that the bezel below the panel will be thicker in comparison with the bezels at the top and the sides of the screen, and the bottom bezel will reportedly contain the Nokia logo. On the other hand, the glass back of the handset will include a vertically-arranged dual rear camera and dual LED flash setup. The rear cameras, according to the leak, will have lenses from ZEISS Optics. Directly below the two imaging modules, users may find the fingerprint scanner. The rear panel will also have the Nokia and the Android One program logos. The presence of the latter symbol suggests that like other offerings of HMD Global, the company will launch the Nokia 8.1 Plus as part of the Android One program. With its inclusion into the Android One program, the Nokia 8.1 Plus should feature stock Android user experience and receive regular security and software updates.

According to the leaked renders, the right side of the handset will contain the volume rocker and the power key, while the bottom of the smartphone will include the USB Type-C port, the microphone, and the loudspeaker. Meanwhile, users will find at the top of the handset the 3.5-millimeter headphone jack and another microphone. The rumor also shows that the device will have a length of 156.9-millimeters, a width of 76.2-millimeters, and a thickness of 7.9-millimeters, although the presence of a camera bump increases the smartphone's thickness to 9.5-millimeters.

Background: While HMD Global launched the original Nokia 8 as its flagship smartphone offering back in 2017, the Nokia 8.1, which the manufacturer unveiled last December, is marketed as a mid-range smartphone and it is likely that the company will also target Nokia 8.1 Plus to the same target audience. There is little information available about what separates the Nokia 8.1 Plus from the Nokia 8.1, although based on recent reports, the two handsets will have similar display sizes and resolutions. The Nokia 8.1 sports the Snapdragon 710 chipset, and it is possible that the Nokia 8.1 Plus may feature the same processor.

If the Nokia 8.1 launches within the next few months, the device may still likely ship with Android 9 Pie pre-installed. This version of Google's operating system includes features like Adaptive Battery, which takes advantage of artificial intelligence to limit the power consumption of applications, and Adaptive Brightness, which also uses AI to determine the best level of screen brightness depending on the condition of the ambient environment. However, HMD Global could also include proprietary functionalities that improve the usability of some of the device's hardware features, which include the Pro Camera UI mode and the OZO spatial audio tech. The former functionality allows the camera to capture long exposure using manual settings, while the latter feature brings high-fidelity spatial audio capture.

Impact: While it is not yet clear what differentiates the Nokia 8.1 Plus from other devices, the Plus moniker suggests that it may include more premium features or hardware compared to the Nokia 8.1, and a price increase usually accompanies these features. Nonetheless, more information about the Nokia 8.1 Plus will likely become available as its launch comes closer.