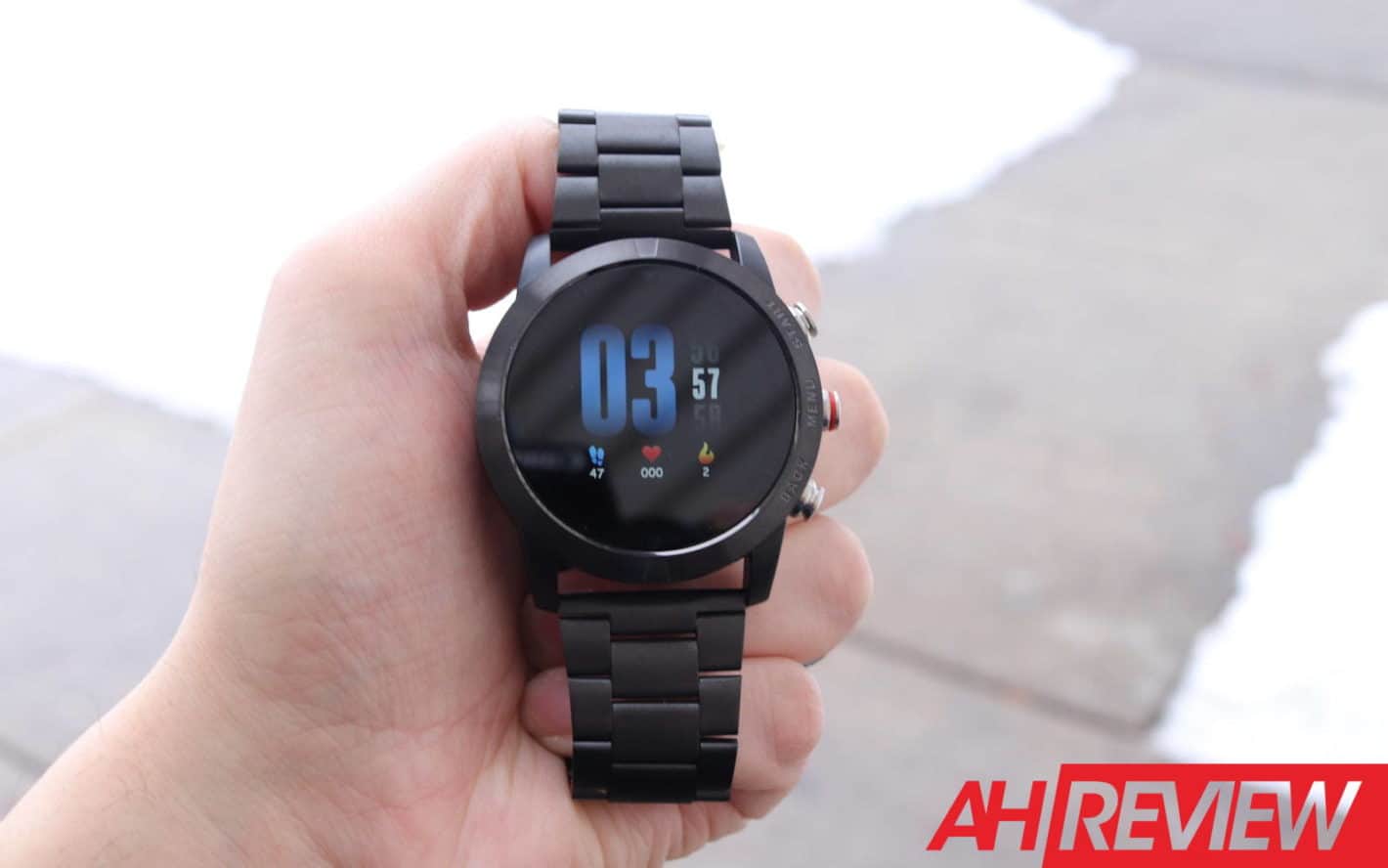 A perplexingly stylish watch that doesn't quite fit the niches perfectly

The NO.1 S10 isn't like other watch-shaped fitness wearables released by the company. Its focus is oddly centered on having a substantial level of sophistication rather than delivering a 90's style rugged aesthetic. As a smartwatch, it features a bright screen, three buttons, and connectivity for reading messages embedded in a metal frame. Our test unit featured a metal band too, which will require some explanation later on.

On the fitness wearable side of things, the NO.1 S10 tracks all of the relevant metrics and offers a couple of features that don't quite match the look. Conversely, each of those was surprisingly accurate in our tests and the functionality of this watch isn't to be dismissed despite its sub-$50 price tag.

Taken in combination, the NO.1 S10 is a perplexing mix of fashion-forward thinking and the same capabilities seen in NO.1's other offerings. Whether or not that's worth a purchase will vary by the consumer but it is well worth a deeper dive.

Starting at $35.99, everything starts with a square-shaped 1.3-inch color TFT display embedded under a circular piece of unspecified Corning glass for the NO.1 S10. That's touch-enabled at 240 x 240 pixels and is both surrounded and backed by a stainless steel frame with an IP68 rating. The watch face measures 47mm across and a hefty 15mm deep.

Inside of that, a Nordic NRF5283QFAA processor and proprietary OS connect to either Android or iOS via Bluetooth 4.2 and an app called WearHealth. That chip also drives a heart rate and blood pressure sensor, in addition to an accelerometer for precision step counting. The 350mAh battery behind those components has a claimed battery life of up to two weeks and chargeable via a magnetic pin charging cable.

For watch bands, the NO.1 S10 ships with a stainless steel, silicone, or leather strap. The former of those options is the one we received for the test and takes the overall weight of the wearable up to 110g while the leather variant only tips the scales at 53g. The clasp style for each is very different with a variety of colors to match with the black or silver surround on the watch itself.

Opening the box for the S10 revealed that our configuration was the black color variation coupled with a black stainless steel traditional watch band. Slipping that out of its protective foam and plastic, the only remaining items are a USB-A to proprietary magnetic pin charging cable and a user manual.

The manual packed in with the latest NO.1 smartwatch is surprisingly thin on content but contained a ton of languages. That's down to just how easy the new watch is to use and wide compatibility, although there are some quirks we'll discuss momentarily.

Starting with one of the only negative points we could find in the hardware is a problem some buyers might face that isn't actually a big issue. The silicone and leather watch bands are easily adjusted with more standard clasps, the metal one we received with our test unit was a butterfly clasp.

We didn't have a watch tool handy and that is going to be required with this style for removing pins to adjust strap length. The band was not one built to be easy to remove entirely either, so we ultimately weren't able to get it sized properly without the correct tools on hand.

In spite of the difficulties, the clasp style is also a positive point here since it does add an air of sophistication not at commonly seen in NO.1 watches. The steel appears to be of the same construction as the watch frame itself, adding durability and style. There's plenty of both attributes in a leather band too while a silicone band is better suited for more rugged environments. But the metal watch band adds something that feels special.

The entire watch feels exceptionally well built regardless of the exceptionally low cost and barring a few caveats, it is a genuinely good value. Buttons press through with a satisfactory click, there's no creaking or groaning from the body of the watch, and it's built to handle tough environments on top of looking great. The NO.1 S10 is a bit thicker than standard smartwatches but not so thick as to feel or look out of place alongside other watches.

The charging port and plastic lining the portion where the band meets the frame are the only real weaknesses in the build. Charging will be covered a bit further down and doesn't present a big issue. The plastic feels sturdy enough and blends well but could cause problems for some users due to easy scratching and the possibility it could break during high-intensity activities such as rock climbing.

The display isn't at all likely to suffer the same issue as the plastic watch band attachment piece but presents the final hardware conundrum with the NO.1 S10. It is square and not OLED, meaning that the blacks on the screen show up as an off tone compared to the circular bezel surrounding the watch face and UI.

At first glance, the screen doesn't present a problem and the offset is very slight. After several days it also became obvious that the display was slightly off-center along the vertical axis and it became impossible to miss once it was noticed. That's not necessarily a big deal and the screen is very responsive, as are the clearly marked buttons. It could quickly become one for situations where the wearer is the type to notice those things.

There are, realistically, three sides to the software equation including the primary UI, interactive tracking, and the interactions with the app interface. None of those is out of the ordinary here for a budget-friendly NO.1 wearable, with the exception of how smooth and responsive every aspect of this watch is. Each click of a button or tap on the screen returns an immediate response.

All four of the included watch faces shows metrics such as heart rate, pedometer, and calorie burn rate, aside from the more traditional analog face. Messages from a smartphone appear immediately on the wrist, providing notifications at a glance, although users can't respond from their wrist.

Iconography and words are displayed almost as clearly as a much more expensive Wear OS or Tizen-powered timepiece too. Each element is easy to read and intuitive to use, thanks again to the smooth operation of the interactive parts of the display and responsiveness of the buttons.

The WearHealth application provides a fairly standard experience, especially with consideration for NO.1 smartwatches, but isn't ideal. The connection with this app and watch does feel deeper and more stable than previous iterations but will be affected by the smartphone in use. All metrics seem to appear within minutes even after extended periods without a Bluetooth connection despite our use with a budget-minded Alcatel handset.

The app lets users easily access pedometer, activity, sleep, and heart rate tracking for free with calendars and charts to view the data over time. Target-setting, call and notification controls and reminders to stay active are controlled there too, as is the alarm clock.

A social network called Care+ that we didn't is linked to the app and completely optional for comparing data and getting encouragement from friends and family who also use the app.

The biggest special feature claimed with the NO.1 S10 is its ability to track blood pressure alongside heart rate. That software doesn't appear to have been finalized yet and we couldn't find any way to access it on our watch but is advertised by the company. So it is likely in the works to be included in a future update but isn't on the watch or in the app just yet.

Aside from the standard activity and metric tracking for walking, running, hiking, cycling, table tennis, badminton, soccer, and basketball, there isn't much extra software with the S10 smartwatch. A compass, pedometer, and stopwatch are included out-of-the-box. We were able to test each feature against home medical equipment for heart rate and a magnetic compass and each was accurate every time we made a comparison.

When we received our test unit, the NO.1 S10 smartwatch was taken out of the box, images were snapped prior to the grueling abuse that daily wear can be, and then it was put on — albeit loosely. A week later the battery life bar on the screen seemed to have barely moved at all despite starting at just above three-quarters full.

The battery life here is a true testament to the level of optimization that's been achieved after the release of several NO.1-branded smartwatches over the past year.

The company claims that this watch should last up to two weeks on a single charge but, given our real-world use, it isn't unlikely it could go for a few days longer than that with no problems. That's not unusual for devices put out by the company but it is good news for those who might forget to charge a wearable every day or for those who intend to use their watch to track sleep patterns.

That doesn't mean the battery situation is perfect though.

The fact that no adapter is included in the package presents problems of its own but the magnetic charging pins are also reversible. Only linking up in a specific way charges the device while the other way does nothing, despite that the magnets pull the pins into place either way. That creates unnecessary confusion when the NO.1 S10 does finally need to be charged and isn't something users will immediately grow accustomed to since charging happens infrequently.

The design is spot on and sophisticated

The battery goes for days and days without stopping

No blood pressure monitoring yet despite being advertised

The screen is offset and obviously square despite the round aesthetic

As is always the case with any electronic, whether or not a device is worth the purchase is entirely subjective. The NO.1 S10 covers a variety of niches but isn't going to be well-suited for everybody.

Where this watch performs best is as a straightforward fitness tracking device that doesn't look at all like a fitness device. That's particularly true with the stainless steel band variants of the hardware. Although adjust the watch band on that version is also the most difficult of the styles, it manages to arguably be the most sophisticated version.

The NO.1 S10 does what it's good at while remaining firmly inexpensive too, which can be a bonus for those who are tough on wearables. That's made all the better by its IP68 rating. If more functionality closer to a smartphone is what a user is looking for, there are other wearables that fit that role but those will be decidedly more expensive.