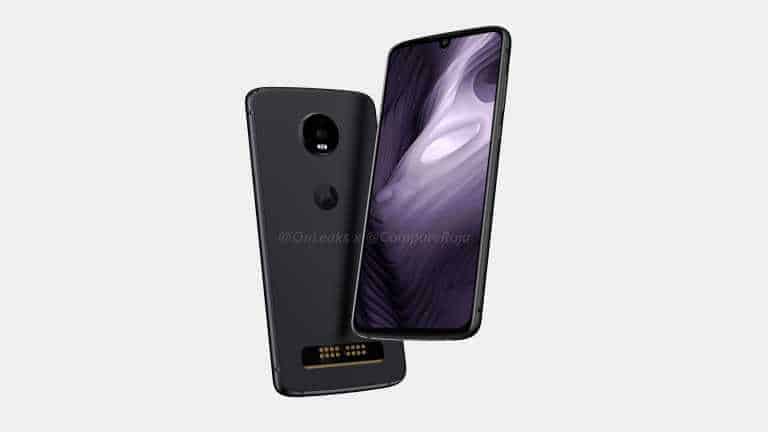 The Moto Z lineup can't change its shape too much on account of the need to stay compatible with older MotoMods, but the front of the devices can still be shaken up, as shown in a series of leaked renders that seem to show a Moto Z4 Play with a nearly bezel-free screen that has a teardrop-style camera notch hanging from the top. Bezels along the top and bottom are extremely thin thanks to the notch, and the side bezels have also slimmed down from previous years' designs. Given the nature of the Moto Z lineup, of course, this seems to be the most significant cosmetic change from the Moto Z3 Play.

Background: Having a look at the images, the thing that jumps out the most, aside from the notch, is the rounded sides, sporting a much softer look than previous entries in the Moto Z lineage. Since there's no word on a Moto Z4 or Moto Z4 Force just yet, it's hard to say whether this soft curve will be exclusive to the Z4 Play. The Play variants in the Moto Z family have always been the thickest of the bunch, which leaves more room for this type of ergonomic fine-tuning. A Moto Z4 may eliminate the heavy curving on the sides in favor of the previously seen mostly flat edges in order to present a thinner profile, while a hypothetical Moto Z4 Force could go either way – it may use those curvier sides as extra reinforcement, or it could ditch them in favor of something more rigid, as seen on the relatively angular Moto Z2 Force. Around back, we find a single camera sensor, a flat Moto logo where the beloved dimple was on Motorola devices of yore, and then of course, the Moto Mod connector down below. All par for the course. Transitioning from the back to the sides, the lack of a change between surfaces means that we're either looking at a metal back or curved glass sides, making one smooth piece of glass for the body of the phone. Naturally, while the latter is definitely possible, the former is much more likely and would jive with established Moto Z series design conventions. Either way, the heavy curve and thickness of the device's sides make an undeniable callback to the Nexus 6, a Motorola device that drew a limited, but loyal audience. Notably, a headphone jack can be seen along the bottom, along with a USB Type-C port and a single microphone, which means that any noise cancellation will take place software-side. Finally, if you're wondering where the disappearing bezels sent the speaker to, look at the top of the device, where a simple, four-hole speaker grill resides.

Impact: The Moto Z Play lineup, at this point, is essentially the Moto X for those who want Moto Mod capabilities, and it shows in this latest set of renders. The Moto Z4 Play on show here, if this is the final design, cleaves appropriately close to the Moto X4. This is an admirably appealing and very ergonomic-looking device, and would make a fine addition to the lineup. What remains to be seen is how the design changes seen here will translate to the Moto Z4 and Moto Z4 Force, if and when those materialize. Given that there was no Force variant in the third generation, Moto may well be leaving durability-minded users out in the cold this time around, too, and perhaps from now on.