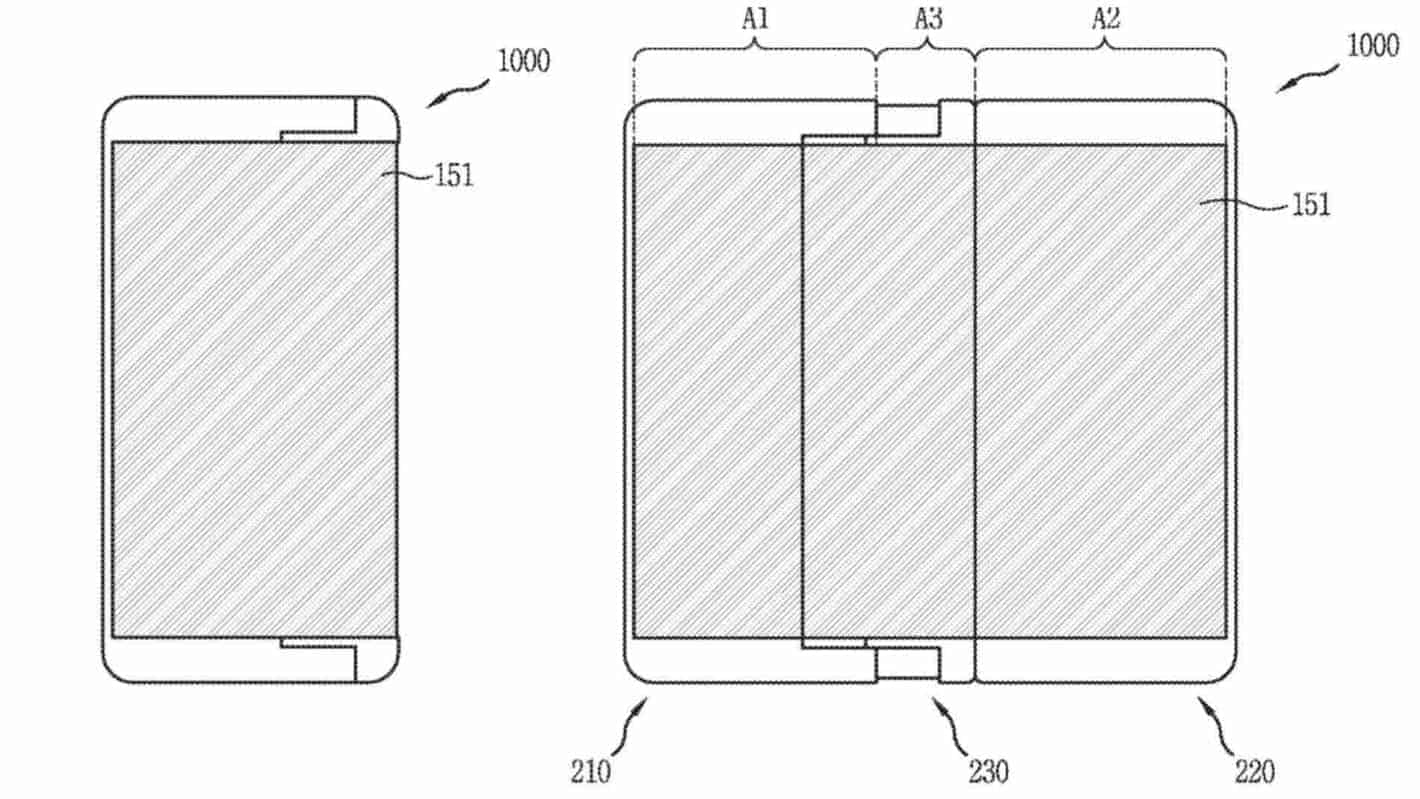 LG is exploring a novel new approach to folding smartphones that combines the characteristics of a roll-up style display seen in earlier patent designs with the much more common folding panel design, Dutch blog LetsGoDigital reports. The means for folding and unfolding the device is unique in that it centers around the use of springs attached to rotating arms and a button-based locking mechanism to 'unfold'. It also doesn't unfold so much as it unrolls. When 'folded' into a smartphone configuration, approximately half of the flexible touchscreen rolls along a pulley-style system into an internal space between the two halves of the hardware. As it's 'unfolded' the screen extends from that along the leading edge, pushed forward by the arms below the display and set on the spring. A slider is set at the center to extend the screen into a more landscape orientation and it's held flat by tension at the edges. Once fully extended, that's all locked into place using the button mechanism. To fold the device back in, it appears that the button needs to be pressed to release the springs holding both the hinge and the extender.

A light-touch UI approach – quite literally

The patent's description includes the usual input means ranging from taps, swipes, and possible support for a pen-style stylus but also hints at less traditional methods for accomplishing the same tasks. References are made in the documentation pointing to several completely touchless interactions. To begin with, LG indicates that proximity sensors might be used for gestures based on distance, speed, time, and position. Dubbed 'proximity touch', that could be also be utilized for standard touch-like actions. Specifically, the company suggests that photoelectric, high-frequency oscillation, capacitance, infrared, magnetic-type proximity sensors or any combination of those could be embedded to accomplish the effect. That's likely intended to help preserve the lifespan of the flexible panel by limiting pressure from fingertips. Although the panels that folding phones are being built around are meant to be flexible, the housing around the design in LG's latest patent probably wouldn't provide the most stability against rough inputs.

A few of the proposed gestures seem to also have been included the patent images, providing at least some insight into how the UI of the folding smartphone-tablet hybrid could work from a user perspective. For example, one diagram shows a chat opened on the left-hand side of the display while a video is playing on the right-hand side. A swipe from the right to the left repositions the media to fullscreen mode leaving the icons of previously opened and still-running applications in a small partition on the left. A swiping motion in the other direction pulls the hidden UI back to the split screen mode. When two applications are open at the same time, the app list moves to the center column. Other apps work in a similar fashion and can be split between the two sides of the phone-sized panels as well. That means an app like the Gallery can showcase a selected image on one side while the full gallery view shows thumbnails of unopened photos on the opposing side.

Something borrowed, something new

The basis for the patent, as alluded to above, seems to be a gathering of ideas from previous LG designs so it isn't necessarily something new but a combination of the Korean tech company's best ideas. In one of the two designs that appear to be referenced, the company envisioned a handset that rolled up and away into a tube or elongated cube. That wasn't entirely dissimilar to LG's work on rolling display panels for television but bore a much closer resemblance to paper or papyrus scrolls. It also had a much smaller bend radius as is shown in the more recent design. Other designs have included similar retracting hinges but focused much more on folding aspects rather than rolling up. By joining the two concepts together, LG has effectively created what may be the most interesting design explored to-date for a folding smartphone. That doesn't mean the company will ever build a smartphone using the ideas expressed in the patent. But it does show that LG is more than willing to think outside of the box to gain the advantage in the still emerging sector of the mobile market.