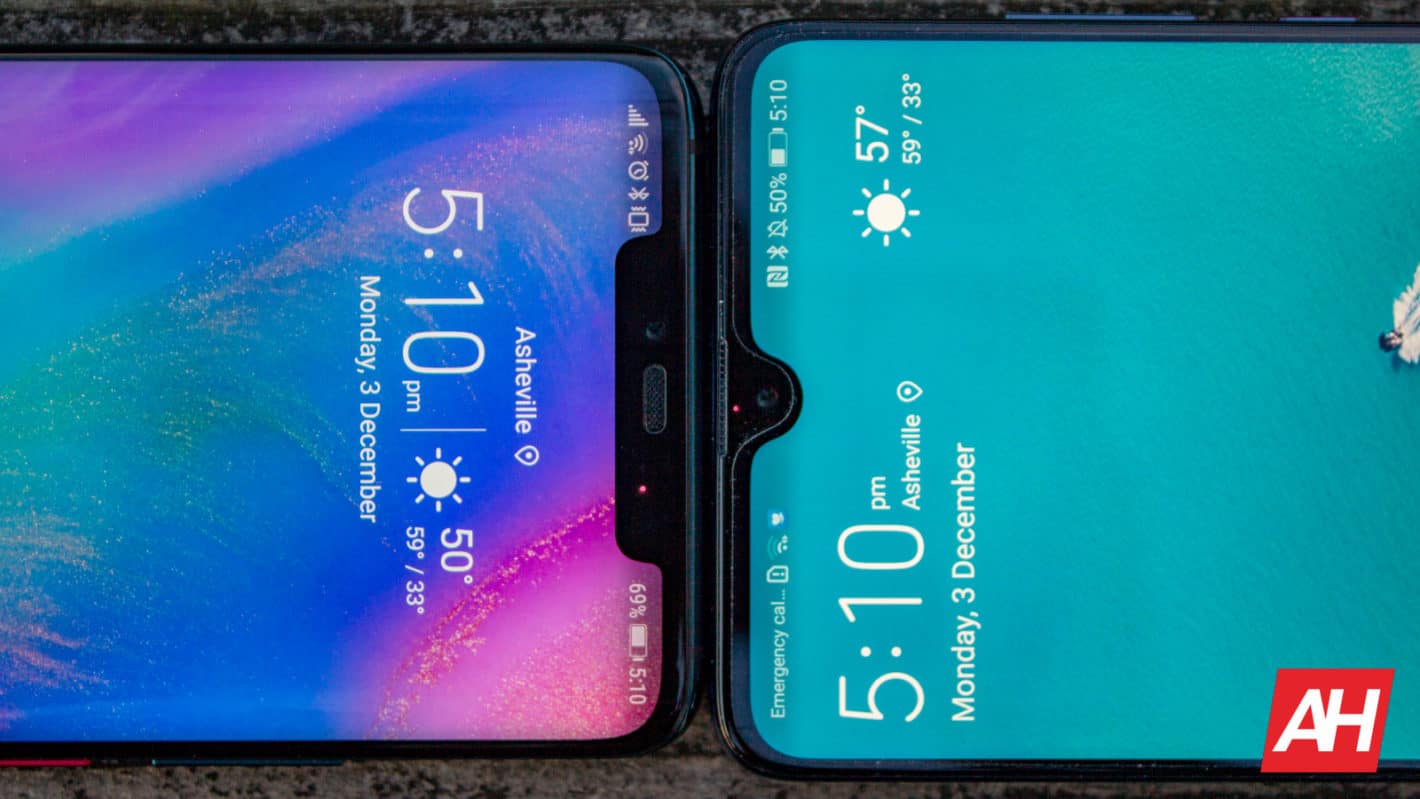 Each phone features a very different type of display, and while the Mate 20’s display is a bit bigger, both phones are the same height, while the Mate 20 is a tad wider and the Mate 20 Pro is a tad thicker. The curved edges make the Mate 20 Pro feel smaller, but having curves to the screen presents some issues that might not otherwise crop up on a flat display. First up is the color distortion at the edges, which typically manifests itself as a green line down both edges when viewing a white page straight on. Tilting the phone to the side makes these lines disappear, as they are products of light refraction off curved glass, but could annoy some consumers nonetheless. There have been reports of a few phones that feature significant “greening” of the edges all around, but these appear to be a faulty batch of units that Huawei is exchanging for fixed ones, and our review Mate 20 Pro doesn’t have this issue at all.

This slight distortion doesn’t appear when watching videos, although the curving of the actual display around these glass edges means content will also be curved. I don’t personally have an issue with this and generally prefer the “fancier” look of a curved panel but, once again, some consumers will definitely find this irksome. The Mate 20 features a completely flat panel with smaller bezels all around, including a significantly smaller notch. The gorgeous OLED panel of the Mate 20 Pro didn’t make its way to the Mate 20, however, and instead Huawei has stuck a very lackluster IPS LCD panel on this phone instead. Color balance of the Mate 20’s LCD panel is far more blue than the nicely calibrated OLED on the Mate 20 Pro, and overall the Mate 20’s display has that “cheap, fake” look about it. You’ll also find some pretty obvious motion blurring/ghosting effects that are a result of slower pixel refresh rates on most LCD tech, and of course black levels and contrast won’t hold a candle to the OLED display on the more expensive phone.

At the end of the day the Mate 20 Pro is the better panel for viewing video content on, not just because it’s more color accurate, but because it doesn’t feature motion blurring, has better viewing angles, and a significantly better contrast ratio and black levels than the Mate 20. The Mate 20 wins with its notch though, although neither is going to get a total pass from us because of one incredibly irritating issue: both notches impede on content when viewed in full screen. This doesn’t just count for apps, which are expected to have the status bar cut off a bit because of the notch, but when watching videos in an app like YouTube, which allows zooming in to fit the full frame of the display, the notch will sit right over top of the video itself. This means a significant section of the video is simply missing on the Mate 20 Pro, while the tiny dewdrop notch on the Mate 20 won’t be quite as much of a bother. Still, this type of thing simply should not be allowed, and it makes no sense to zoom in so far that the notch covers the display. With tall aspect ratios on both phones, content should only be allowed to be displayed up to the status bar (or the bottom of the notch, if you prefer), and as a result, create a negative point when watching videos in full screen.

Despite having curved edges, there are no specific features on the Mate 20 Pro that take advantage of the curves the way phones like the Xperia XZ3 or Samsung Galaxy S or Note lines do. These curves are solely for design choices and serve no real function. Huawei offers an Always On Display (AOD), but it’s basic and only shows the time, date and number of notifications waiting to be seen. There’s no customization or additional information, just an on/off toggle switch and a schedule of when you’d like it to turn on or off. The rest of the display settings available are awesome though and provide serious customization to the look and feel of each display. Resolution is set to "smart" by default, which typically seems to pick 1080p+ most of the time for battery life/IQ balance, but can be forced to the higher or lower resolution.

Natural adjustment option to the screen is a really nice new addition that adds some more character to the display, similarly to how the Google Home Hub’s display works. This setting automatically adjusts the color to fit the room and make the display more comfortable to view in any light. Folks who prefer a more manual adjustment experience can adjust color and saturation of the panel, either via pre-defined settings or a custom color wheel. You can also adjust the display size and density, but there’s still the annoyance of the notification shade up top and software navigation bar on the bottom not resizing, no matter what display size or DPI is set.

Last year, Huawei swapped out the traditional metal back of the Mate series and instead opted for glass, owing mainly to the fact that wireless charging was quickly becoming a requirement of flagship phones. Huawei’s design on the Mate 10 was quite unique, and this year they’re changing things up pretty wildly again. Across the back you’ll find a brand new textured glass, one that feels like those little hologram stickers from a vending machine, complete with a satisfying noise when scratching with a fingernail. This new pattern serves multiple purposes. First up, it provides a more textured experience to glass, which can often be slippery, and makes the phone far easier to hold in dry or cold climates. It’s not grippy the way a soft-touch rubber back would be, but it’s simpler to hold and use without a case, and I found myself having no trouble holding the phone even in sub-freezing temperatures.

Secondly, it resists fingerprints and smudges incredibly well; a stark contrast from the glass on the front which gets super smudgy, especially on the Mate 20 Pro, which tends to be a fingerprint magnet up top. What’s also cool is that this texture provides a unique feel for both the front and back of the phone, meaning you can tell which side you’re picking out of your pocket or bag immediately. This may seem like a funny issue to solve, but I’ve personally picked up my phone upside down or backward plenty of times since many phones now have identical curves on front and back, and use the same shiny glass material on both sides as well. The Mate 20 Pro’s curves mimic that of a Samsung Galaxy S8 or S9, without a doubt, and looks incredibly similar in most respects. Curved left and right sides on the front glass are an identical shape to the same curves on the back of the phone, and represent a uniformed look all around.

The Mate 20 features the same exact curves on the back, but without the curved front and a larger display, maintains a larger, wider footprint as a result. The screen up front is flat, but sports smaller bezels all around, including an almost non-existent chin and forehead, as well as a tiny “dewdrop” notch. The Mate 20 is a gorgeous device because of this and really shines because of the lack of bezels and the giant screen, in particular. The Mate 20 Pro also looks nice, until you turn the screen on. While it sports a better display than the Mate 20 (more on that below), it’s got a giant notch up top, and bigger bezels all around too. It feels like both an upgrade and a downgrade in design, and things are made weirder by the fact that the cheaper, flat-screened Mate 20 comes with a pre-installed screen protector, while the more expensive Mate 20 Pro, with its curved glass (that’s notoriously difficult to apply screen protectors to) is missing one.

Huawei ships both phones with clear TPU cases, which definitely add some extra grip to the experience, provide some minor drop resistance, and of course, prevent worry about scratching when placing the phone down. There are a handful of other interesting differences between the hardware on the two, aside from the nuance of curves and display designs. These include the buttons on the side, which are a thin, shiny metal on the Mate 20 Pro, while the Mate 20 features a thicker shiny metal volume rocker and a flat, textured power button. The Mate 20 Pro’s power button is all red, while the Mate 20 is only red around the edges, with the textured end receiving the same coat of paint as the rest of the body. Both phones feature an IR blaster up top, something that’s become a bit of a relic in the industry, but a handy tool from time-to-time nonetheless. The less expensive Mate 20 actually sports a 3.5mm audio jack up top as well, something that’s unfortunately missing from the Mate 20 Pro, but both phones feature a USB Type-C port at the bottom.

Huawei has finally started improving vibration motors in its phones, but these remain some of the least impressive vibration motors on any flagship, and just end up feeling a bit cheap when compared to any of Samsung’s flagships, and at least a generation or two behind phones from LG or Google in 2018. Huawei is also utilizing a brand new Nano Memory Card standard for both phones, and while the default 128GB storage configuration is probably plenty for most people, you’re definitely going to find folks that are disappointed that their $5 32GB microSD card won’t fit in the phone, rather they’ll have to pay several times that for something that’s likely slower and more difficult to find. While it’s always great to see technology move forward when there are obvious positives, some changes, like the removal of the 3.5mm audio jack, feel overly anti-consumer as they provide no real advantage to the consumer and add in plenty of negatives at the same time. Right now the nano memory card standard is just that; more expensive for less storage that’s also slower. It’s 45% smaller, which is cool but shouldn’t have made its way to phones until it makes sense.

Next Page - Mate 20 Performance and Battery