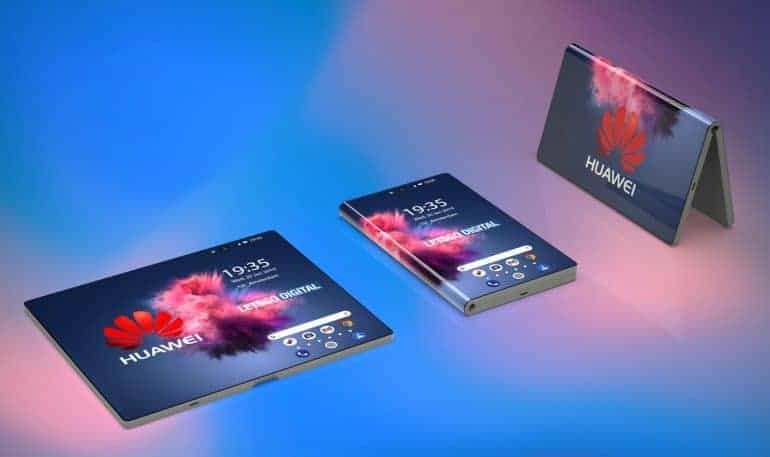 MWC 2019 could be the place where the first foldable smartphones will be officially introduced by various OEMs including Huawei, and while the manufacturer has yet to reveal any official details regarding its foldable mobile device, a series of 3D renders created recently by LetsGoDigital offer a glimpse at what Huawei’s final product might look like. If these images do reflect Huawei’s actual design then the market can expect a smartphone-tablet hybrid with a single hinge and a flexible display wrapping around the outside.

The 3D renders have been inspired by Huawei’s previous patent applications pertaining to foldable smartphone technology. One of these patents appeared in the database of the World Intellectual Property Organization as early as March 2018, so the Chinese OEM seems to have been entertaining the idea of a foldable device for quite some time. Late last year Huawei confirmed to the media that indeed, it has a foldable smartphone in the works, but no hardware or design details were shared at that time.

It is strongly believed that Huawei’s foldable smartphone-tablet hybrid will fit in the upper echelon of the mobile market. In fact, this is likely true for most, if not all of the upcoming flexible smartphones. This is an infant and costly technology and a foldable design implies not only a new type of display to be used but also intricate hinges and overall more materials for a larger case. These foldable hybrid devices are expected to break the $1,000 price point easily, and previous rumors suggested that Samsung’s first foldable device could cost around $1,500 at the lowest, or up to $2,500. Huawei’s response to the emerging foldable market is likely to fit in a similar price point, so all in all, these products will not be viewed as a replacement for existing premium smartphones adopting the proven chocolate bar form factor, or at least this won't be the case during their first years on the market.

Huawei is expected to unveil its first 5G-enabled smartphone at Mobile World Congress in Barcelona during an event scheduled for February 24. Reports suggest that the OEM will also have something to say about its first foldable mobile device, but as yet it’s unclear whether this means a teaser, a promise for the future, the unveiling of a prototype device, or the introduction of a final product ready for the consumer market. As yet, Samsung appears to be leading the foldable smartphone race and the Korean OEM unveiled a prototype last year during Samsung Developer Conference. The unit seemed to be wrapped in a case meant to conceal the smartphone’s actual design, but countless patents indicate that Samsung is considering different designs with one or two hinges. Meanwhile, Huawei’s vision seems to be more focused on the type of design detailed by the 3D renders seen in the gallery below.

Huawei’s foldable smartphone-tablet hybrid has also been reported to be 5G-enabled, and in turn, this would mean that the unit should make use of the OEM’s own Balong 5000 chipset which supports 2G, 3G, 4G, and both standalone and non-standalone 5G networking. If all goes according to recent rumors, more hardware details should be revealed in the coming weeks.