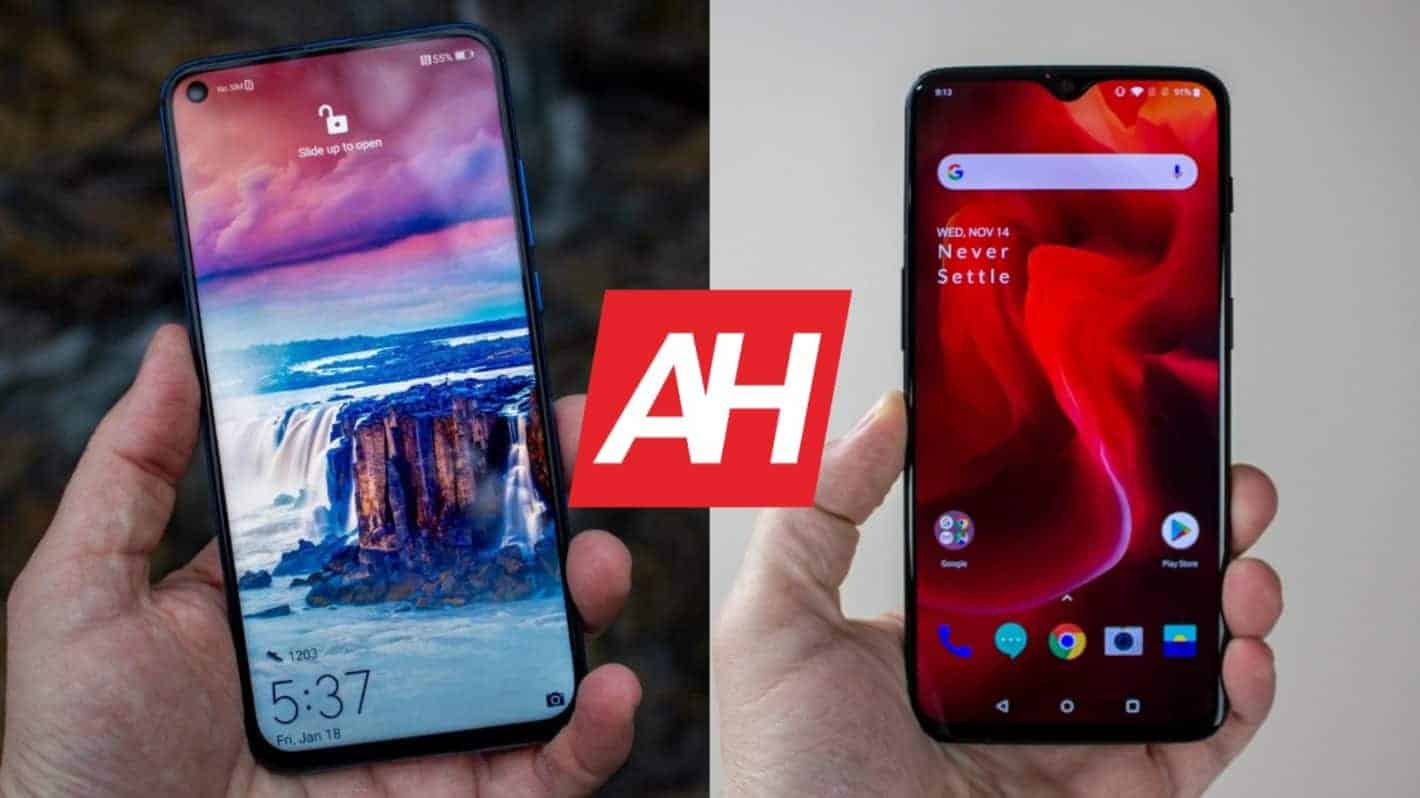 Many of you are probably still thinking of which phone to order, and even though our HONOR View20 review is not done all the way just yet, we have been using the phone for a while, and feel safe saying that the device is impressive. All in all, this will be a rather difficult comparison, but it has to be done, so let’s get started.

The HONOR View20’s design has been the talk of the town recently, and for a good reason, HONOR did a great job when it comes to the design, not only does the phone look premium, but the company implemented the hole-punch perfectly, as it’s a part of the notification bar, pretty much. The OnePlus 6T is not a slouch when it comes to the design either, as the phone sports a really small notch at the top of the display. Other than the hole-punch and the notch, both of these phones sport extremely thin bezels, the bezel below the display is extremely thin on both devices, and both of them are made out of metal and glass.

The View20 has a polarizing finish on the back, but it may be too pronounced for some, in which case, you may want to opt for the OnePlus 6T’s clean-looking back. The OnePlus 6T includes an in-display fingerprint scanner, so its back looks much cleaner than the HONOR View20’s, not to mention that the finish on the back is just as nice, and yet not that showy. Both of these companies did a great job when it comes to designing their phones, but we’ll give this one to the View20 due to its smart implementation of the hole-punch, and overall fresh look, even though I personally prefer the waterdrop notch over the hole-punch display, and the less showy backplate on the OnePlus 6T. It’s all up to you, it all depends on what you prefer, really.

Displays sizes on these two smartphones are quite similar, while the aspect ratio is also quite similar, though not the same. The HONOR View20 sport a 6.4-inch fullHD+ (2310 x 1080) IPS LCD display, while the OnePlus 6T features a 6.41-inch fullHD+ (2340 x 1080) display. The OnePlus 6T’s panel is taller than the HONOR View20’s, and as a result of that, the phone is a tad bit narrower and taller. Now, in terms of sheer display quality, both of these displays are sharp enough, but the panels used are quite different. The OnePlus 6T features a display which offers punchier colors, while its display also looks better overall.

When you put these two phones side by side, such differences will be noticeable. Not to say that the View20’s display is bad, as it’s not, not at all, for an LCD panel, the View20’s display is actually really great, one of the better fullHD+ LCD displays around. All in all, if you’re not really addicted to OLED panels, as they often offer more contrast and more vivid colors, not to mention pure blacks, well, you’ll be happy with the View20’s panel as well, but for us, the OnePlus 6T is a winner in this comparison.

This was not an easy category to compare, at all, as HONOR really did step up to the plate with the View20. The View20 comes with HONOR’s Magic UI 2 overlay, on top of Android 9 Pie, and the experience is actually quite great. This is an alternative overlay to Huawei’s EMUI, and there are a lot of similarities between the two, but the Magic UI 2 simply feels… snappier. Now, unfortunately for HONOR, OnePlus’ OxygenOS is on the other side, an Android skin that is often considered to be amongst the best Android overlays out there, as it’s really well optimized, and it’s just as far as stock representation of Android, if not faster.

So, as you can see, this is not really an easy decision, as both overlays are not only really fast, and look nice, but are also filled with features, and many of those features are quite useful. If you throw both of these phone’s powerful internals in the mix, including their CPUs, plenty of RAM, and company optimizations… well, you’ll realize that both phones are a great option, but we’re still leaning towards the OnePlus 6T here, mainly due to its extremely polished software and amazing day-to-day performance in general.

The OnePlus 6T is often lauded for its great battery life, which is not exactly surprising having in mind that it has a 3,700mAh battery, fullHD+ display, and that its software is really well-optimized. Well, the OnePlus 6T did find its match in the HONOR View20, it seems, as this phone is also a battery powerhouse. Based on our initial impressions, the HONOR View20 has plenty to offer in the battery life section. This phone also comes with a 4,000mAh battery, and thanks to its software, display, and power efficient processor, chances are you will not have to charge up this phone until bedtime, same goes for the OnePlus 6T.

Both phones are quite capable of providing over 6 hours of screen on time during the day, though that will depend on your usage, of course. Both phones offer fast battery charging, and are capable of charging up their respective devices extremely fast, they’re quite comparable in that regard as well, as both phones’ charging speeds are probably at the very top of the charts. Neither of these two phones offer wireless charging, though. All in all, this is one category that we simply could not pick a winner, as both phones are truly great in this regard.

We have to admit, we were quite skeptical when it comes to the HONOR View20’s 48-megapixel rear-facing camera, and its TOF 3D companion camera, but the phone managed to surprise us. The HONOR View20 is an extremely capable device in this regard, it’s capable of shooting really solid images in pretty much all lighting conditions. Low light shots, in particular, managed to surprise us, and they’re even better than what the OnePlus 6T can produce, most of the time, anyway, as it all depends on the scene. This camera does have a downside, though, it does not have a wide-angle lens, so that may be an issue for some of you.

The phone’s front-facing camera is quite solid, though nothing to write home about, same goes for the OnePlus 6T. Now, these two cameras can both provided really great shots, in pretty much all lighting conditions, but considering how much the HONOR View20’s camera managed to surprise us, plus in comparison between the two, we preferred more View20’s images that we took over the ones provided by the OnePlus 6T, so we’ll opt for the HONOR View20 here, even though you will not go wrong with either one.

As per usual, we will mention some things here, that we did not mention above, as we cannot fit everything into just five categories. Let’s start with water and dust resistance; it’s worth saying that neither of these two phones has an official IP rating, even though, technically, both of them can handle some rain and whatnot. The HONOR View20 does have a 3.5mm headphone jack, while the same cannot be said for the OnePlus 6T, so if that’s a factor for you, the View20 has an edge.

Both phones offer a single bottom-firing speaker, and both speakers are quite solid, though nothing extraordinary. All in all, both are great options, it only depends on one's preferences. If you’d like a fresher design, go with the HONOR View20, if you prefer OLED displays and in-display fingerprint scanners, the OnePlus 6T is your choice. Having said that, we were unable to decide the winner here, as they are completely equal in our eyes, so we’ll call this a tie.