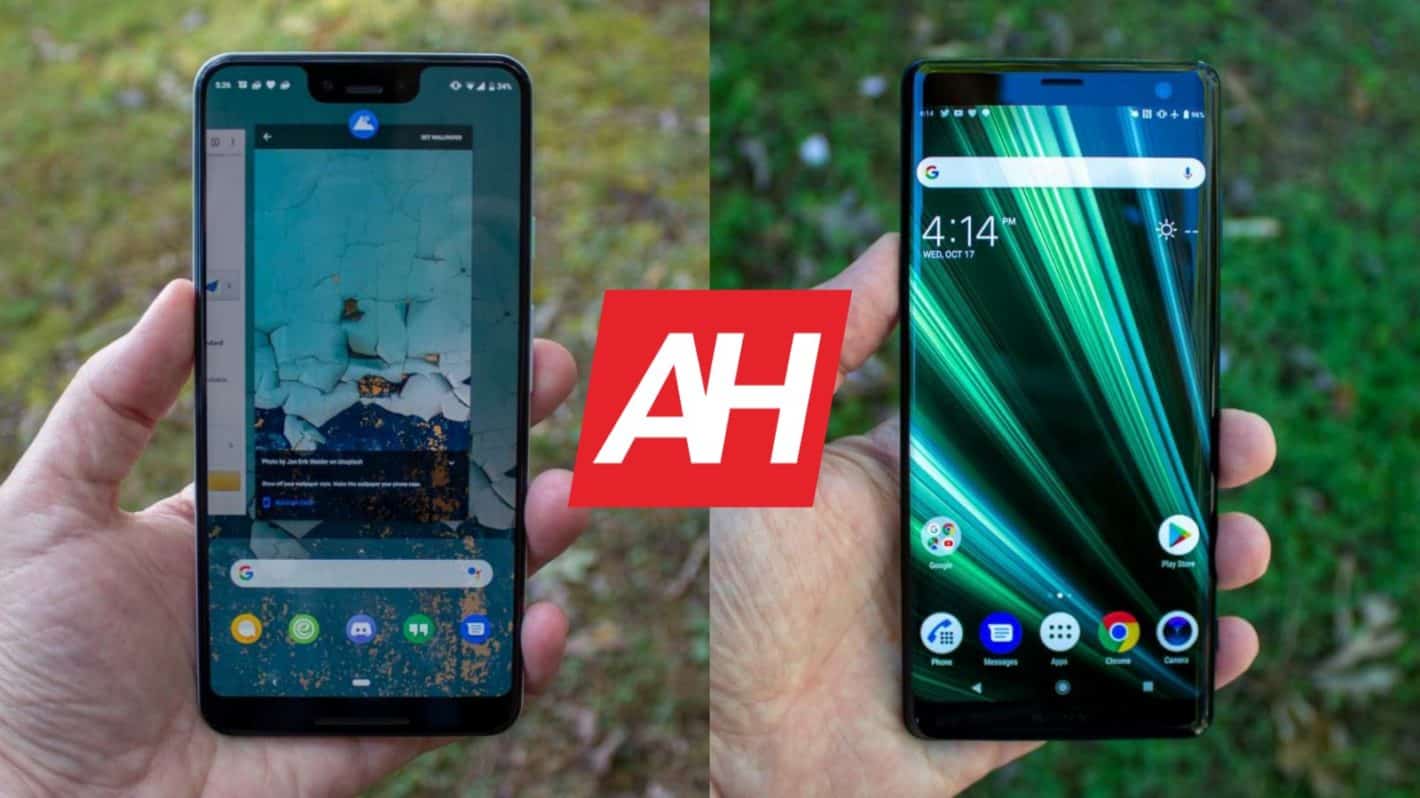 The Google Pixel 3 XL is the latest and greatest Google has to offer, while the Xperia XZ3 is the same for Sony. These two phones were both introduced in the last quarter of 2018, and they both have plenty to offer, but each of them has its own set of advantages over the other, which is why we'll compare them today. As per usual, we'll kick things off by listing their specifications, and then move to the five main pillars we use in all of our comparisons. These two phones do have some things in common, but for the most part, they're considerably different, so this ought to be an interesting comparison.

The moment you lay your eyes on these two phones, you will notice how different they are. Google and Sony really did take different approaches when the design is concerned, as they not only look considerably different, but different materials have been used here, not to mention that general shapes of these two phones are vastly different. The Pixel 3 XL is made mostly out of metal, though it has a glass panel in the upper portion of its back side. The Xperia XZ3, on the other hand, comes with a metal frame stuck between two sheets of glass. The Xperia XZ3 is more slippery than the Pixel 3 XL, as it is curvier, and the general shape of the phone actually makes it slippier than it should be, but it also feels incredibly premium in the hand, more premium than the Pixel 3 XL, that's for sure. Sony opted not to include a notch on the Xperia XZ3, instead, the phone has bezels above and below the display. The Pixel 3 XL, on the other hand, has a gigantic notch at the top of its display, and a rather thick bezel below the display as well. Both devices feature capacitive fingerprint scanners on the back, though the Pixel 3 XL's is in a much better position, even though both scanners are extremely fast. That being said, we'll give this one to the Xperia XZ3, even though it's considerably slippier than the Pixel 3 XL, it looks much better, and feels more premium in the hand on top of that, the Pixel 3 XL looks more like an alpha sketch of an upcoming smartphone.

What's interesting is the fact that both the Pixel 3 XL and Xperia XZ3 come with P-OLED panels. In fact, their panels are actually almost identical in terms of resolution as well, even though we're looking at different aspect ratios, and somewhat different panels here. The Pixel 3 XL features a 6.3-inch QHD+ (2960 x 1440, 18.5:9 aspect ratio) display, while the Xperia XZ3 comes with a 6-inch (2880 x 1440, 18:9 aspect ratio) display. The Xperia XZ3 is a considerably narrower phone because of its display size, but it is thicker than the Pixel 3 XL, though both devices are equally tall. In terms of the general quality of these two panels, they're quite comparable. The Pixel 3 XL vastly improves over the Pixel 2 XL's panel which was plagued by various issues, and delivers on its promise. Both displays support HDR playback, and both offer punchy, vivid colors, and are a joy to look at, not to mention that both are plenty sharp, so no objection here at all. On top of that, both displays are protected by the Corning Gorilla Glass 5, so we cannot really determine a winner here, these two panels are too similar in quality.

The Google Pixel 3 XL has been the talk of the town when it comes to performance at first, as it launched with a number of issues which managed to surface over time, and the main one is probably memory management. Google included only 4GB of RAM in the device, and considering its power-hungry camera (due to image processing), and other processes, the phone really struggled to satisfy power users, even though Google did optimize it since then, and it works much better now. The Xperia XZ3, on the other hand, did not have any major performance issues, a stumble here and there, and that's it. Both of these phones are fueled by the mighty Snapdragon 845 processor, and both actually ship with the same amount of RAM, as the 6GB RAM variant of the Xperia XZ3 is available in Taiwan only. If we were comparing these two phones a month or two ago, the Xperia XZ3 would probably win in the "Performance" category, but the two phones are more or less on par when it comes to performance now, as Google did fix most of the Pixel 3 XL's performance-related issues… so, this one's a tie as well, as both devices are quite powerful and can handle whatever you throw at them.

The Google Pixel 3 XL comes with a 3,430mAh battery, while the Xperia XZ3 features a 3,300mAh battery, and neither of them are stellar in this department, not at all. Both devices will probably be able to get most users through the day, but if you're a power user, chances are you will have to reach for a charger before your day is over. These two phones have high-res displays and their batteries should have been larger, while both companies should have done more in terms of software optimization as well. That being said, the Xperia XZ3 was able to provide users with more battery in a single day, at least in our testing, and considering that both devices offer Qi wireless charging, and fast wired battery charging that is comparable, they're quite similar in a number of ways. We will give this one to the Xperia XZ3, though, mainly due to the fact it will probably provide you with more juice in a single day, even though your mileage may vary, of course, as different people use their phones in different ways, so… who knows.

This was a rather difficult category to compare, as even though both devices have a single camera on the back, they do have a different approach to photography. Google is quite heavy on image processing via software, which has been a case for quite some time now, while Sony is using a slightly different approach. Lenses used by the two companies are also quite different, as the Pixel 3 XL comes with a 12.2-megapixel camera (1.4um pixel size, f/1.8 aperture lens)), while the Xperia XZ3 features a 19-megapixel camera (1.22um pixel size, f/2.0 aperture lens). In the daytime, under good lighting, both devices are admirable, as expected, and Sony can even shoot ultra slow-motion video, whose quality is admirable. The moment light goes away in one way or the other, the differences start to show. The Pixel 3 XL is not exactly a huge step-up compared to the Pixel 2 XL, at all, actually, but it still feels like it's capable of taking better images than the Xperia XZ3 in low light, at least in most conditions. We did manage to get great low-light pictures with the Xperia XZ3 as well, but its camera has some hardware limitations that prevented it to be victorious in most situations. All in all, we'll give this one to the Pixel 3 XL, even though both phones are quite capable in that department, and that goes for both front-facing and rear-facing cameras.

As per usual, there are things that cannot fit in the categories above, and things in general that we omitted in this comparison, as we cannot compare every single detail, of course. Having said that, it is worth noting that both devices pack in Bluetooth 5.0, while both also offer stereo speakers. If you are in for an audio device, though, the Xperia XZ3 may be a better bet, as it offers 24-bit/192kHz audio. Both devices come with active noise cancellation with a dedicated microphone, while both are IP68 certified for water and dust resistance, so they're quite comparable in that regard. Both devices also ship with Android 9 Pie, even though Sony's implementation is skinned. Both of these phones are really solid, which is to be expected considering they are flagships for their respective companies. Both of them are great choices, but depending on what you look in a phone, you will probably prefer one over the other, be it audio, camera, battery life, or something else entirely, but we will give this one to the Xperia XZ3, a narrow win if you will, based on the categories we've compared.

Advertisement
Trusted By Millions
Independent, Expert Android News You Can Trust, Since 2010
Publishing More Android Than Anyone Else
38
Today
156
This Week
76
This Month
4064
This Year
105541
All Time
Advertisement