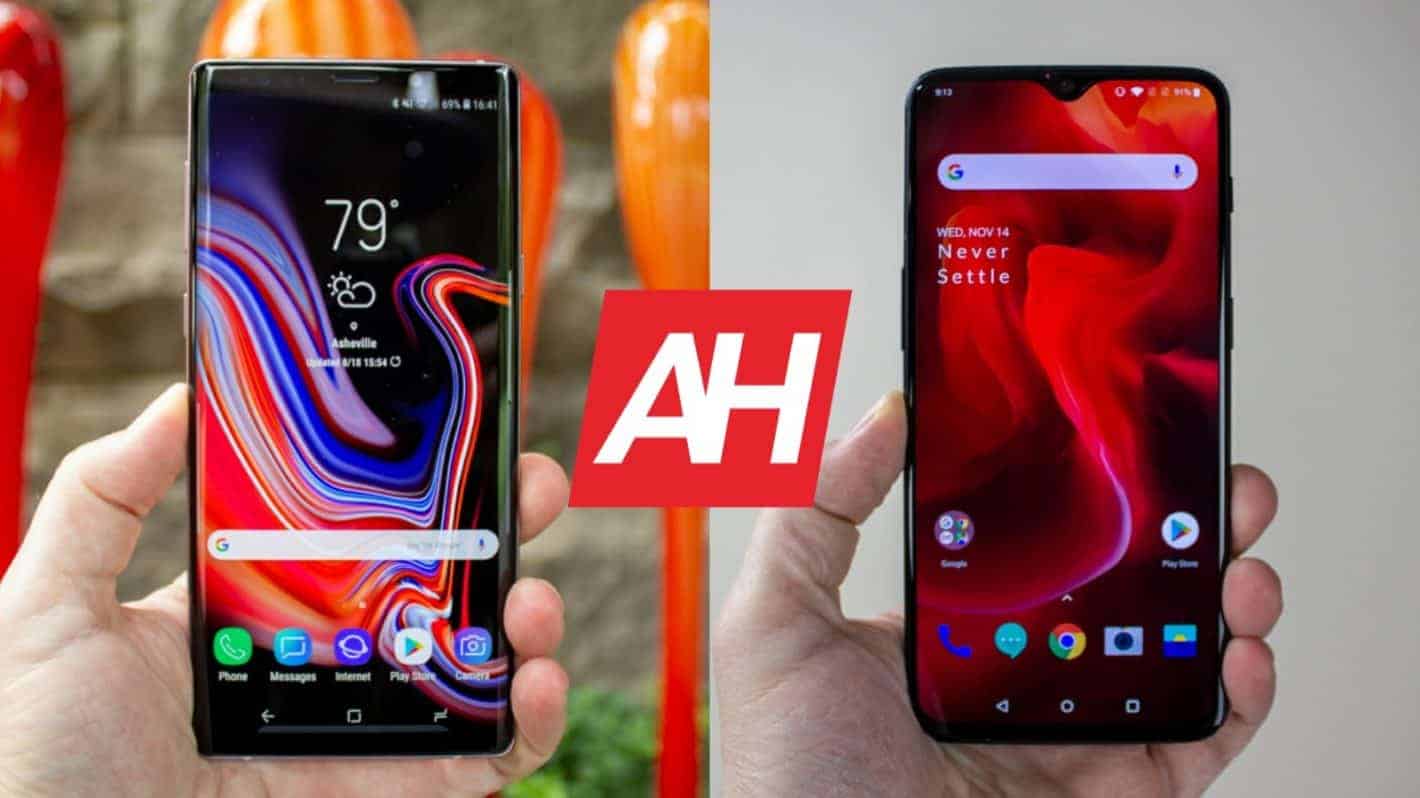 The arrival of the Galaxy S10 series is less than two months away at this point, at least based on rumors, but until that happens, the Galaxy Note9 is still Samsung’s flagship. In this comparison, we’ll pit the Galaxy Note9 against the OnePlus 6T, the latest and great offering by OnePlus. These two are amongst the hottest smartphones out there at the moment, and even though the price difference is considerable between the two, at least looking at their base models, both of these devices have plenty to offer in pretty much every way. So, as per usual, we will pit them one against the other in a number of categories that you can find down below, and before we get to that, you can check out the spec comparison between these two smartphones.

As far as the design is concerned, it’s safe to say that both of these phones are nice-looking, though they’re also quite different when it comes to sheer look. Both phones are made out of metal and glass, and both are curved on the back, which essentially means they’re both quite slippery. Both phones ship with extremely thin bezels, though the Galaxy Note9 opts for a non-notch design, while the OnePlus 6T features a tiny teardrop notch at the top of the display. That notch basically makes it possible for the OnePlus 6T to have thinner top bezel than the Galaxy Note9, but it does away with an LED notification light which was present on the OnePlus 6T, and which is included in the Galaxy Note9. The look of the camera setup on the back of both devices is different, both feature two cameras, though their orientation is different on each device, the Galaxy Note9 opts for a horizontally-aligned camera setup, while the OnePlu 6T comes with vertically-aligned cameras. Both feature oval-shaped fingerprint scanners on the back, and both ship with rounded display corners. The Galaxy Note9 delivers a 3.5mm headphone jack, while that’s not the case with the OnePlus 6T. These two phones feature almost identical displays, in terms of size, though the OnePlus 6T comes with a taller display aspect ratio. The OnePlus 6T is both shorter, narrower, and thinner than the Galaxy Note9, despite the fact its display is 0.01-inch larger than the one on the Galaxy Note9. Truth be said, we really can’t decide to whom to give this category, as they both deliver in the design department, it’s only a question as to what you prefer. If you want a phone with thin bezels and no notch, go with the Galaxy Note9 (presuming you don’t mind the size), if you don’t mind a notch and want a more compact phone, go with the OnePlus 6T.

Both of these phones are quite beastly when it comes to specs, and they both offer great performance. Depending on the variant, the Galaxy Note9 comes with either the Snapdragon 845 or Exynos 9810, while the OnePlus 6T packs in the Snapdragon 845. The Galaxy Note9 includes 6GB or 8GB of RAM, while the OnePlus 6T comes in 6GB, 8GB, and 10GB flavors, depending on the variant. The bottom line is, both devices offer great hardware, capable of offering great performance, but the more significant difference comes when we look at software. The Galaxy Note9 comes with Android 8.1 Oreo out of the box with Samsung’s custom UI on top, while Android 9 Pie is expected to land soon. The OnePlus 6T ships with Android 9 Pie out of the box, with OxygenOS on top of it. OxygenOS is regarded to be one of the best Android skins out there, and plenty people prefer it over stock Android, claiming it’s just as far or faster than stock Android. OxygenOS truly is extremely optimized, and it is a step ahead of Samsung’s skin, while it’s also considerably lighter compared to Samsung’s offering. If we look at sheer performance, speed and reliability of both devices, the OnePlus 6T is a step ahead of the Galaxy Note9, despite the fact both are quite admirable in that regard.

So, in conclusion, which of the two phones has the upper hand? Well, in all honesty, we could not decide, at least based on the categories that we used to compare them. These two phones are aiming at a considerably different type of users, which is also something that makes things more difficult. The thing is, the OnePlus 6T is considerably more affordable than the Galaxy Note9, and considering how close the two are in terms of quality, that is a huge selling point on its own. The device is extremely fast, quite possibly the one of the, if not the most fluid phones out there, not to mention its great battery life, and extremely fast charging. The Galaxy Note9, on the other hand, is a great option if camera quality is your top priority, or if you need all those additional features that Samsung’s skin brings, not to mention the Galaxy Note9’s S Pen stylus, which in collaboration with Samsung’s skin, opens up various additional possibilities for the Galaxy Note9, Taking all of that into consideration, we really cannot decide between the two.