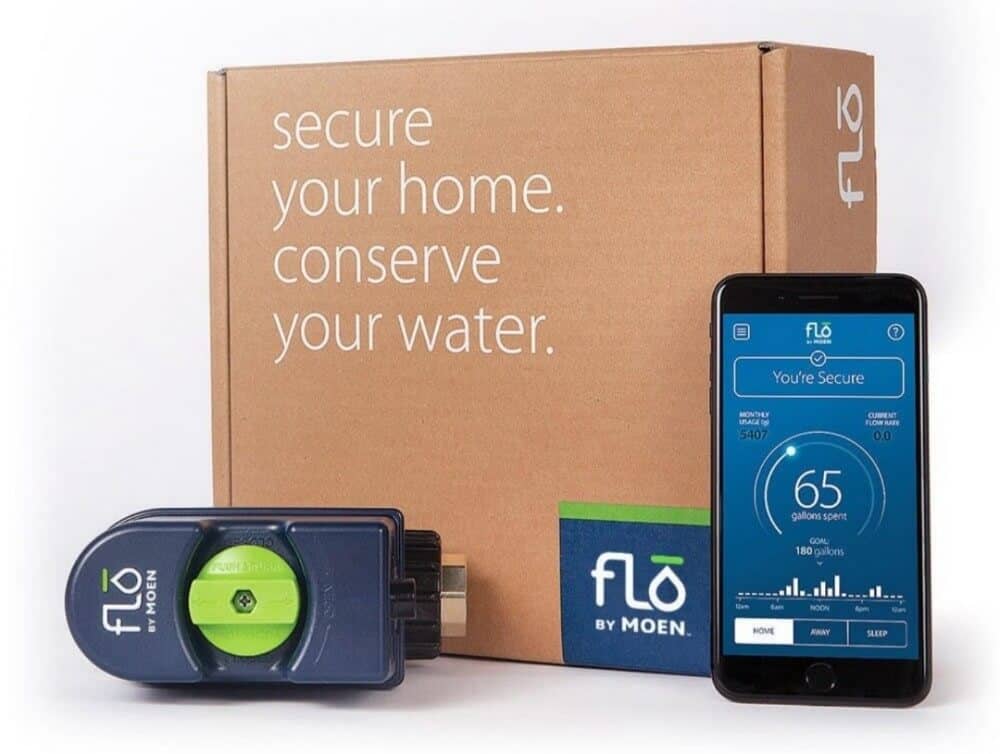 Update: the original version of this article indicated that the matte black model and Google Assistant integration were available now. They are not, they are launching in Q1 and Q2 2019, respectively.

Moen has taken to this year’s CES with new AI integration, functionality, and a revised design for its U by Moen shower system and teamed up with Flo Technologies to relaunch the Android-compatible intelligent water supply monitor Flo by Moen. Neither of the products is new but that doesn’t mean there’s not a lot to talk about. Initially made available following an announcement at CES 2017, the U by Moen smart shower is now compatible with Google Assistant in addition to its support for Apple’s Homekit and Amazon Alexa. That means that in addition to the using those other two assistants, users can now simply say “Hey Google, turn on my shower to 101 degrees” or “Hey Google, turn off my shower” to interact with their U by Moen shower. The IoT-enabled automated shower solution’s digital controller device has also undergone a redesign and is now available in a matte black coloration to suit the interior design of more homes than its original configuration allowed for.

Flo, now Flo by Moen, is now being launched in Canada alongside a new subscription service that adds additional oversight to the smart water monitoring and leak detection system. The subscription will cost homeowners $5 per month and adds proactive monitoring assistance from an expert Flo Technologies team, in addition to access to live chat support and a ‘Water Concierge’ for help on demand. The team also provides a deeper analysis of their water usage. Subscribers gain an additional three-year warranty, a certified letter for insurance companies that could help lower the cost of homeowners insurance, and the assurance of up to $2,500 of deductible assistance. That’s used against the cost of water damages — specifically, an insurance deductible — in case an insurance claim has to be filed for that while Flo by Moen is installed.

An even smarter shower, now with Google Assistant

As mentioned above, U by Moen is a smart shower system first introduced in 2017 as a way to make showering a more consistent, convenient, and connected affair. Its integration with smart home ecosystems means that users can activate, set the temperature, and turn off their shower by voice or via a dedicated app. The ‘U’ shower system actually goes quite a bit further than that too, allowing users to individualize and automate their experience. Flow is a smart Wi-Fi-connected digital valve that is mounted on the main water line for a shower, with a separate five-inch non-touch display attached at up to 30-feet from the shower to enable convenient placement. Users have control of up to 12 personalized presets, including name, greeting, outlets, temperature, shower timer, and notifications but can also pause a shower without losing temperature.

That all means the shower can be warmed up and then the flow stopped in advance so there’s no need to stand in a cold shower and also allows for water conservation during a shower. Temperatures can be set from 60 to 120 degrees and the shower status is shown on the connected display. Water temperatures are indicated by the color of the display itself, which moves through light blue, dark blue, purple, orange, and red for different ranges. The smartphone app is free and users can customize outlet icons as well as which Wi-Fi network the system is connected to, language, and the time zone. Every U by Moen shower product has its own unique encrypted key for enhanced security against cyber threats.

Protecting against water damage with AI

Flo Technologies first introduced the world to Flo back in 2018 at CES and has now partnered with Moen to relaunch its product under the Flo by Moen branding. While both Flo by Moen and U by Moen are app controlled AI-enabled products,  Flo by Moen is the more practical invention of the two relaunches from Moen at CES 2019. The proprietary water monitoring system attaches to the main water line of a given home and actively monitors for leaks, breaks, and other problems such as abnormal use. Leaks can be detected down to as small as a single drop per minute, allowing a possible savings of up to 10-percent on water bills. It can also gauge how likely a water line is to freeze based on ambient temperatures. Those metrics can be useful to save money over time but the primary function is also to prevent home damage from leaks.

Proprietary machine learning algorithms referred to as FloSense actively monitor and learn each individual home to provide accurate alerts. If homeowners fail to respond to notifications or if a major problem is detected, the system can automatically shut down the flow of water to prevent further damage. An additional benefit from Flo by Moen is that homeowners can conserve water in a more straightforward and transparent way, thanks to the gadget’s connectivity via a free mobile app. Integration with Amazon Alexa, Google Assistant, and IFTTT takes that even further, enabling voice interactions and more.

Moen indicates that each of the newly relaunched products will be showcased at this year’s CES 2019 event in Las Vegas, running from January 8 through January 11. The new matte black configuration for the U by Moen will be available in Q1, while the Google Assistant integration is currently pegged at launching in Q2 of this year. Flo will become available in Canada at an unspecified later date before the end of the year. The newly rebranded device is already available to homeowners in the U.S.