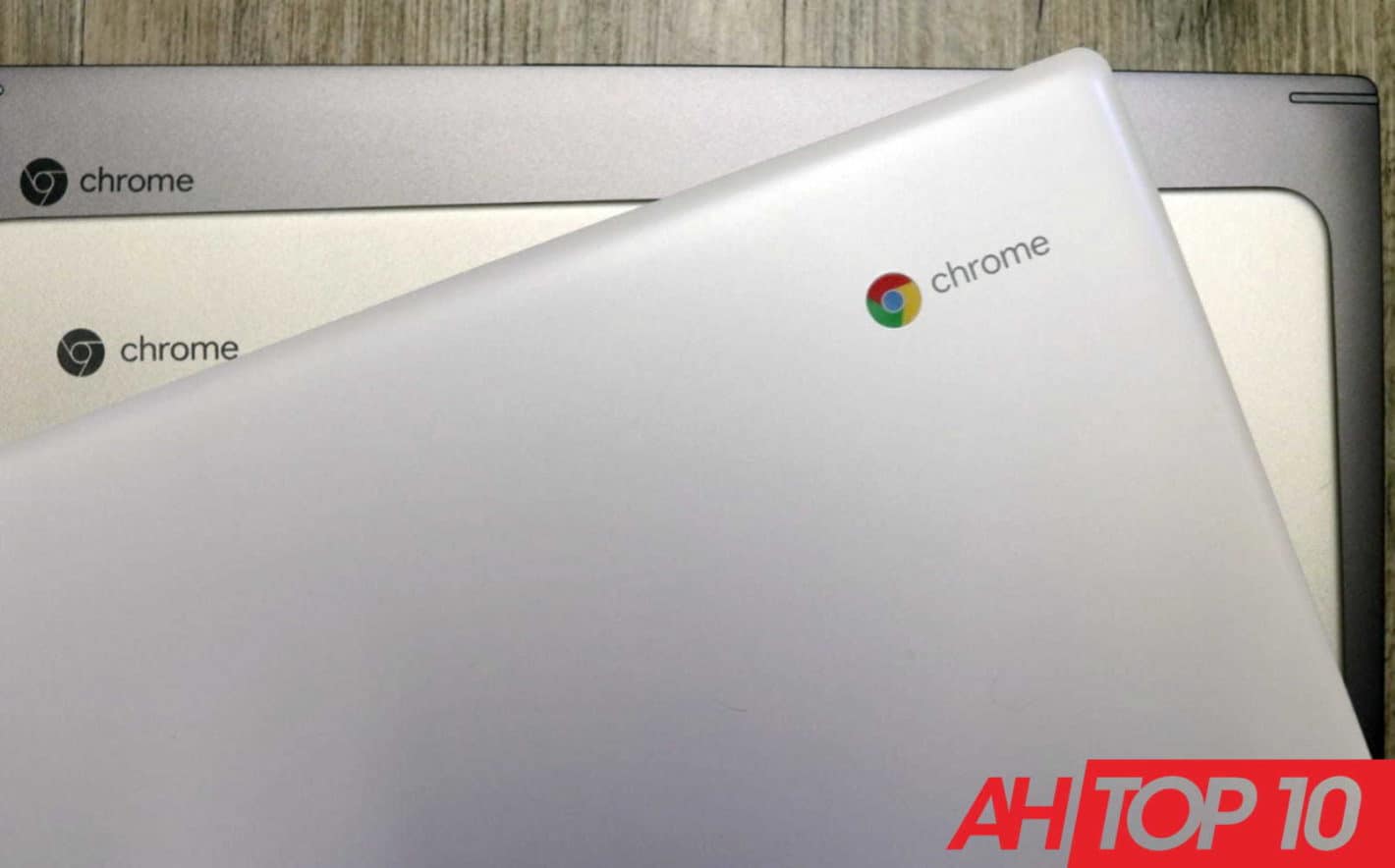 January has kicked off the new year somewhat slowly for Chrome OS but that doesn't mean things have been boring. The year's biggest announcement for Chromebooks may have arrived, in fact, at CES 2019 with the return announcement for ASUS's Chromebook Flip series. That device won't land for customers until later in the year but will be a certain inclusion in this Android Headlines Top 10 when it does.

AMD has entered into the Chrome OS market for the first time as of CES too, revealed alongside several new Chrome OS gadgets for education from ASUS.

Most of the latest Chromebooks occupy the budget segment and don't quite fit it in our top ten. That will change over the next twelve months but this month's list has chiefly undergone minor shuffling in the meantime to account for some optimization problems with Chrome OS in tablet mode.

Lenovo's e-series Chromebooks offer a high value-ratio starting at $219 with ruggedization to MIL-STD-810G standards and specs to cover a variety of uses. Released in early 2018, there's also still several years of life left for each entry in this family.

The top of the lineup is an 11.6-inch two-in-one convertible dubbed the Chromebook 500e with a moderate Intel 3450U processor backed by 4GB RAM and 32GB expandable storage. That ships with a garaged EMR stylus for use with an imperfect but respectable 1366 x 768 resolution display. Stacking on the 500e's position as one of the cheapest stylus-enabled Chrome OS tablets, the device features more modern connectivity via Bluetooth 4.2 and dual-band Wi-Fi.

The Lenovo Chromebook 300e and 100e certainly have less performance than their older sibling and don't include a stylus. They are among the most affordable in their class to feature a 360-degree hinge and ruggedization. So this is one series that earns its place easily by providing plenty of bang for the consumer's buck.

ASUS has a sure-fire winner incoming with its Chromebook Flip C434 but the predecessor to that device is still going strong in the meantime. The Chromebook Flip C302's branding gives away that this is a two-in-one folder but ASUS took things further to provide plenty of features beyond that. Its solid 2.5lb 1.5-inch thick all-aluminum build is high-quality, packs expandable storage, and ten hours of battery life that has all combined to make 'Flip' the brand that it is.

Pricing for the ASUS Chromebook Flip C302 varies based primarily on the processor chosen. Everything starts at $474 and Memory and storage start at 4GB RAM and 64GB, respectively and can be joined with an Intel Core m3, Intel Core m5, or Intel Pentium 4405Y processor. More expensive versions gain double the storage and memory.

There's no stylus included with those builds but users do get two USB-C ports for charging or display out capabilities and a 12.5-inch 1920 x 1080 display coated in Gorilla Glass at every level. So the ASUS Chromebook Flip C302 offers a great value across the board.

Samsung has condensed its own efforts in the Chrome OS arena into two machines that come in a variety of configurations. Both of those have seen iterative improvements in new versions since launch and each ships with a pressure sensitive S-Pen Stylus built right into the top-tier, Samsung-quality aluminum frame. Each is also a two-in-one format, enabling tablet, tent, stand, or clamshell modes.

At 12.2-inches and a resolution of 1920 x 1200, the Samsung Chromebook Plus starts at $499 and can be purchased either with or without 4G LTE mobile connectivity on Verizon's network. The latter of those costs $100 extra and ships as model number XE525QBB-K01US rather than model number XE521QAB-K01US. The Chromebook Plus is the only Samsung Chromebook to leave the factory with a second camera placed just above the keyboard for easy snaps in tablet mode.

Each has the same Intel Celeron 3965Y 1.5GHz processor, 4GB RAM, and 32GB storage with the exception of a newer version that ships with double the storage capacity. That variant also packs an Intel Core m3 chip that can be turbo boosted up to 2.6GHz.

Samsung's Chromebook Pro shares its processor with the most powerful variant of the Chromebook Plus but bumps the base frequency up to 2.2GHz. Storage starts out at 64GB as well and RAM stays at 4GB. The biggest difference is its 12.3-inch 2400 x 1600 display, which allows for more clarity and its secondary variant with a backlit keyboard for just $100 more.

The Google Pixel Slate may be one of the best tablet format Chrome OS devices on the market but there are still plenty of problems holding it back. Chrome OS needs a lot of work to optimize for the format, with users reporting lag and other issues on the less expensive variants. Fixes are on the way but a few of those are also found on more expensive versions so it is a problem for those without a keyboard.

The pricing of the Pixel Slate is another issue, especially since consumers are required to pay extra for a stylus and keyboard accessories. With that said, there are a lot of things to love too and this is the best dedicated Chrome OS tablet on the market.

Each variant ships in a midnight blue all-metal slab with a fingerprint sensor embedded in the power button. The 12.3-inch molecular display is set at 3000 x 2000 and 8-megapixel cameras adorn the front and back. Two USB-C ports are available for charging.

Pricing starts at $599 and goes as high as $1599. Specs start out at 4GB on memory and 32GB storage with an Intel Celeron processor. At the upper end, RAM jumps to 16GB and storage tops out at 256GB. An 8th Gen Intel Core i7 chip is coupled with that. As add-on items, the pressure sensitive Pixel Pen and keyboard case cost $99 and $199, respectively.

HP's Chromebook x2 launched last year and occupies this list as the only true detachable, making it unique among its peers but that's not all that makes it stand out. The company's decision to include Bang & Olufsen speakers and a battery rated at up to 12.5-hours goes well above most of the competition too. Better still, the Chromebook x2 only measures 0.3-inches thick at 1.62lbs and starts at $539.

Some users have noted that the Chromebook x2's bottom edge is sharp enough to make use while holding the tablet against the body uncomfortable and unwieldy. The complaint is common enough to keep the x2 down on our list but not universal.

The premium look and feel Dell puts forward more commonly with its high-end Windows laptops finally made its way into the Chrome ecosystem with the Inspiron Chromebook 14.

Available in a contemporary all-metal Urban Gray chassis starting at $599, the Inspiron Chromebook 14 ships with a backlit keyboard and a garage EMR pen in a two-in-one format. So buyers can configure the device in clamshell, tent, stand, or tablet mode for a variety of uses. A 1080p 14-inch touchscreen complements that keyboard. Both standard and Type-C USB ports are included.

The sleek appeal here doesn't stop with the external features either thanks to a 15-hour rated battery. That power supply is backing up an eight-gen Intel Core i3 chip at 3.4GHz with 4GB DDR4 RAM and 128GB standard.

Lenovo's Yoga Chromebook C630 is a perfect device for those who don't want to spend too much but want a Chrome OS device that's future proof and ready to work. At $539.99 to start, there are two primary configurations shipping with either an Intel Core i3-8130U or Intel Core i5-8250U. Both chips are eight-generation backed by either 4GB or 8GB 2400MHz DDR4 RAM and 64GB or 128GB storage.

The top model takes things a bit further to include a backlit keyboard on top of everything else and costs just $599. The display is also bumped to 4K from the standard 1920 x 1080 panel.

All the latest plugs, ports, and connectivity options are included as well as two great speakers — for a laptop — in the all-aluminum 4.2lb, 0.7-inch thick convertible midnight blue frame. Bezels around the display are extra thin compared to much of the competition too.

Up to ten hours of use can be had from the included 56Wh battery.

The HP Chromebook x360 14 is essentially a two-in-one Chrome OS device that abandons the detachable stylings of its 'x2'-branded sibling with a 14-inch 1920 x 1080 display. The design does allow for 4K output via the included two USB-C charging ports thanks to the Intel UHD Graphics 620 chip driving the visuals.

On aesthetics, HP coupled the stylish ceramic white backing of the display portion with a deep mist blue on the standard backlit keyboard. The above-mentioned USB Type C- ports are offset by two USB 3.1 standard ports and Bang & Olufsen speakers.

Packed inside the 3.9lb package is an Intel Core i3-8130U chip with a massive 4GHz Turbo Boost clock frequency for when work really needs to get done. The base clock for that is set at 2.2GHz. That's backed up by 8GB of DDR4 2400MHz RAM and 64GB of eMMC flash storage.

The battery inside the HP Chromebook x360 14 is rated to last up to 13.5-hours, stacking on everything else to make this one of the most capable Chromebooks available at just $599.99.

The Google Pixelbook is an expensive device that starts from $999 and has several configurations all the way up to $1,649. The biggest difference across the range is in the specifications of internal components, beginning with a variant with a seventh-gen Intel i5 processor backed by 8GB RAM and 128GB storage. At the upper end, the Chromebook comes with 16GB RAM and 512GB of storage that's utilized by a seventh-gen Intel i7 chip.

The age of those components and the company's decision to keep pricing up aren't doing this device any favors in keeping it high on our list. The company hasn't revealed plans for a future update yet either, only releasing the Pixel Slate at its most recent hardware event. So it will likely keep falling on the Android Headlines top ten list as the months go by.

For hardware, Google justifies its pricing not only based on the PC-level internal components but on the premium build quality. The device ships in a two-tone white-on-silver frame with two top-end speakers, four noise-canceling mics, and a sleek build that's just 2.5lbs and 0.4-inches thick.

A Pixelbook Pen stylus isn't included in any of the builds, costing an extra $99 but Google does include a 2400 x 1600 stylus-compatible display at 12.3 inches.

Acer's Chromebook Spin 13 is a showstopper in design and a true Pixelbook competitor on specs. Primarily intended for business-class users and not widely available on initial release, the $895 variant of the device later released for general consumers planting Acer's offering firmly at the top of our list.

The specs list for this Chromebook don't place it at the most high-value side of the curve and could even be considered overkill by most. It's Intel Core i5-8250U is a full generation newer than that found in the number two entry on our list and that's joined with 8GB RAM and 128GB storage. Driving that is a 10-hour rated battery.

The 13.5-inch Gorilla Glass touchscreen is compatible with an active stylus and one is included with this all-aluminum convertible. Resolution is set at 2256 x 1504 and any content on display can be mirrored, expanded, or redirected to a secondary monitor via either of the two included USB Type-C charging ports. The business-ready and somewhat flashy steel-gray frame weighs 3.5lbs and the Gorilla Glass coating covering the display can be found on the trackpad too. Above that is a standard backlit keyboard.

The Acer Chromebook Spin 13 doesn't lose any of the platform's overall focus on portability thanks to slim bezels. The whole package measures in at just 12.19 x 9.68 x 0.67-inches.