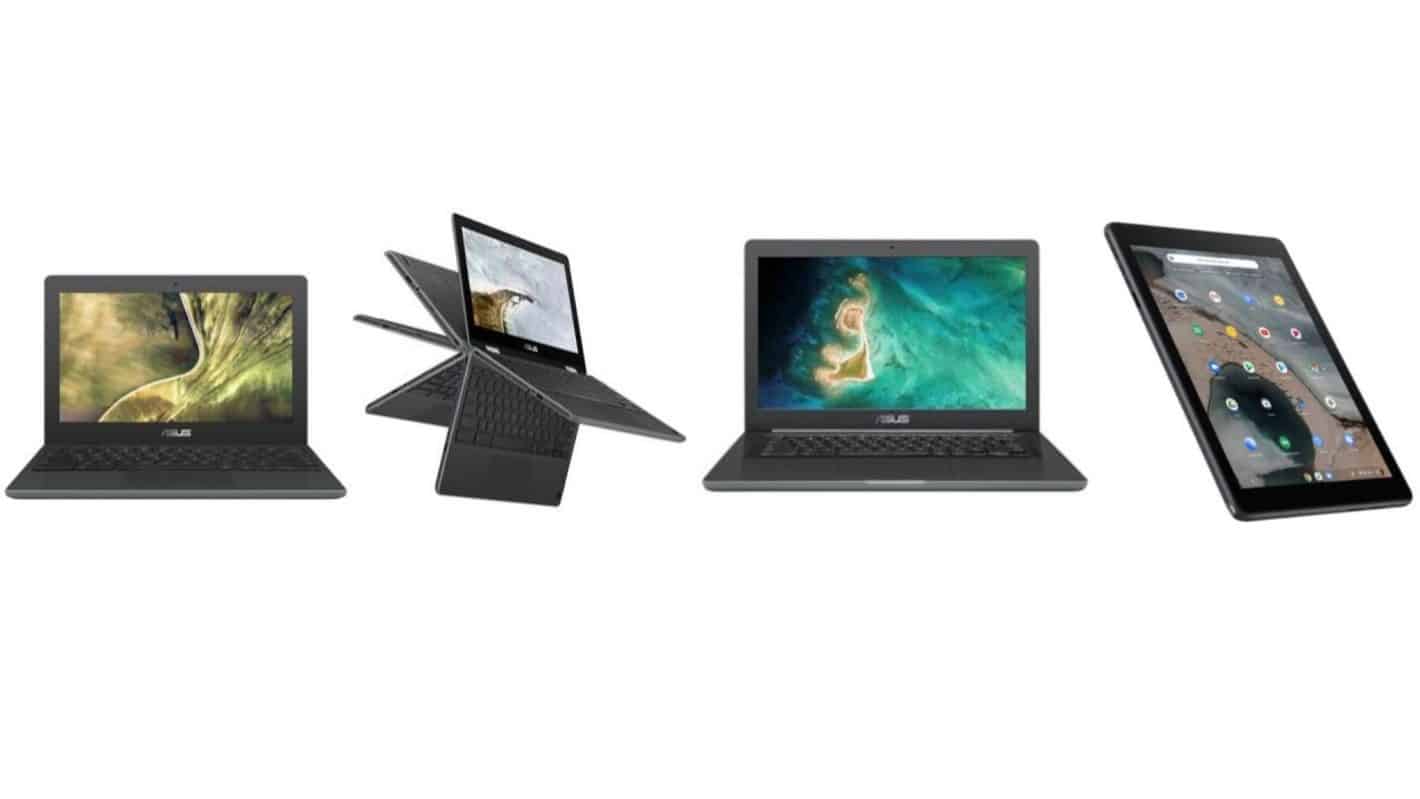 ASUS has unveiled a new series of Chrome OS devices including its first Chrome OS tablet, two 11.6-inch Chromebooks, and one 14-inch Chromebook in the leadup to this year's CES 2019 event in Las Vegas. Some of the information provided with the announcement and three of the devices line up with earlier expectations stemming from leaks regarding ASUS's plans for the event — which runs from January 8 through January 11. The ASUS Chromebook C204, Chromebook C403, Chromebook Flip C214 convertible, and ASUS Chromebook Tablet CT100 are unexpectedly aimed squarely at the education sector. Although there are some common aspects to each, they're all targeting very different users and use cases in those environments.

A new entry into the Chrome OS tablet segment

The biggest reveal in ASUS's latest announcement is also the smallest new Chrome OS gadget the company has planned for release, the ASUS Chromebook Tablet CT100. First hinted at in the above-mentioned leaks, the new device will ship in a 10-inch form factor with a 9.7-inch multi-touch tempered glass-coated QXGA display panel set at a resolution of 1536 x 2048. That's embedded in a rubberized, rugged frame measuring 238.8 x 172.2 x 9.9mm thin and weighing just over one and a quarter pounds to better accommodate the small hands of the younger users its designed for. A garaged stylus is included in that black and grey-colored frame, in addition to a forward-facing 2-megapixel HD camera and a 5-megapixel rear-facing primary snapper. For inputs, ASUS's first-ever Chrome OS tablet includes a single USB Type-C charging port capable of display out connections or data transfers as well as charging via USB 3.1. That's on top of a micro SD card reader and a 3.5mm audio combo jack.

Internally, the ASUS Chromebook Tablet CT100 is powered by a Hexa-core OP1 Chromebook-specific processor centered around two ARM Cortex-A72 cores and four Cortex-A53 cores and backed by up to 4GB of LPDDR3 memory clocked at 1866MHz. Graphics processing filters through the accompanying Mali-T864 GPU while storage comes in at up to 32GB. Connections are enabled by Qualcomm's QCA6174 M.2 chip with 2 x 2 MOMO support under Wi-Fi 802.11AC standards and Bluetooth 4.1 is included for more localized data and file sharing. That's secured using Google's H1 Security IC and a 35W lithium-polymer battery powers the whole package with enough energy to last a full school day on a single charge. For more physical protection, ASUS has tested its new tablet to survive drops from heights of just above 3.28-feet — around the height of the average desk or table.

Each of the three more traditional Chromebooks is very similar to one another in almost every respect and each features a ruggedized frame that's not unlike that of the ASUS Chromebook Tablet CT100. A spill-resistant and tamper-resistant keyboard to enhance that durability on the outside. A forward-facing 1280 x 720 HD webcam, a Kensington lock slot, micro SD card reader, 3.5mm audio jack, two USB Type-C ports, and at least one USB Type-A standard 3.1 ports are included exterior too. In the case of the ASUS Chromebook C204 and Chromebook C403, two standard USB ports are embedded in the frame's edge. The 16:9 LED Backlit HD display panel on all three Chromebooks is set to a resolution of 1366 x 768 with a brightness of 220 nits or 250 nits in the case of the Chromebook C214. Internally, each device utilizes dual-band Wi-Fi 802.11ac and Bluetooth 4.2 for connectivity and eMMC 5.1 storage alongside 2400MHz LDDR4 memory. All three feature the same Google H1 Security IC as the new ASUS tablet as well. Since each is intended for use by students, all of them are also designed to be exceptionally easy to repair in nearly every regard.

Beginning with the smaller two of ASUS's latest Chromebook offerings, the Chromebook C204 and C214 are both 11.6-inch devices available in two configurations each. The Chromebook C204 will be available in touch or non-touch variations and has a standard clamshell design. That will be driven by an Intel Celeron N4000 Gemini Lake series processor backed up by 32GB of storage and up to 4GB RAM. An integrated Intel HD Graphics 600 unit will drive the graphics side of things while power is provided by a 50Wh battery. That fits in a frame that measures 29.2 x 19.9 x 19.5~20.1cm and weighs just over 2.64lbs with its display mounted on a 180-degree hinge.

Comparatively, the ASUS Chromebook C214 will be a 2-in-1 folding convertible with an almost identical frame to the C204 with the exception of added 360-degree hinges. Its display panel will also be coated in Corning's Gorilla Glass 3 for added durability in conjunction with its support for stylus input in one of its two variants. The same graphics chip is in use here as well but is coupled with either an Intel Celeron N4000 or Intel Celeron N4100p processor with up to double the RAM and storage capacity of the Chromebook C204. Battery capacity is set at 45Wh and secondary camera is provided for 'world-facing' shots with the convertible ASUS Chromebook C214 in either a 5-megapixel or 8-megapixel configuration.

ASUS's Chromebook C403 shares most of its similarity with the Chromebook C204 and could easily be described as that other device's larger sibling at a display size of 14-inches. Powered by an Intel Celeron N3350 coupled with Integrated Intel HD Graphics 500, the Chromebook C403 is identical to the smaller device in terms of RAM and storage. Its display resolution, flexibility, and ports are identical too. A 45Wh battery powers those components and everything is set in a 34.3 x 23.3 x 2.05cm frame weighing just under 3.75lbs. The ASUS Chromebook C403 is designed to offer a very similar experience to its smaller counterpart but in a larger format that doesn't exceed the size of a textbook for easy portability. The added space in the frame wasn't wasted either since ASUS chose to include two stereo speakers capable of outputting as much as 80dB of sound.

Pricing and availability information for the new devices has not been made available by ASUS. Instead, its announcement equates to a soft launch of the new education-focused Chrome OS family of devices ahead of those being showcased during CES 2019. That will take place throughout the event, with scheduled tours also available, at the ASUS showroom. The tech giant will be revealing more information alongside each computer's full launch, including details about various configurations and their individual prices and regional availability over "the coming months."