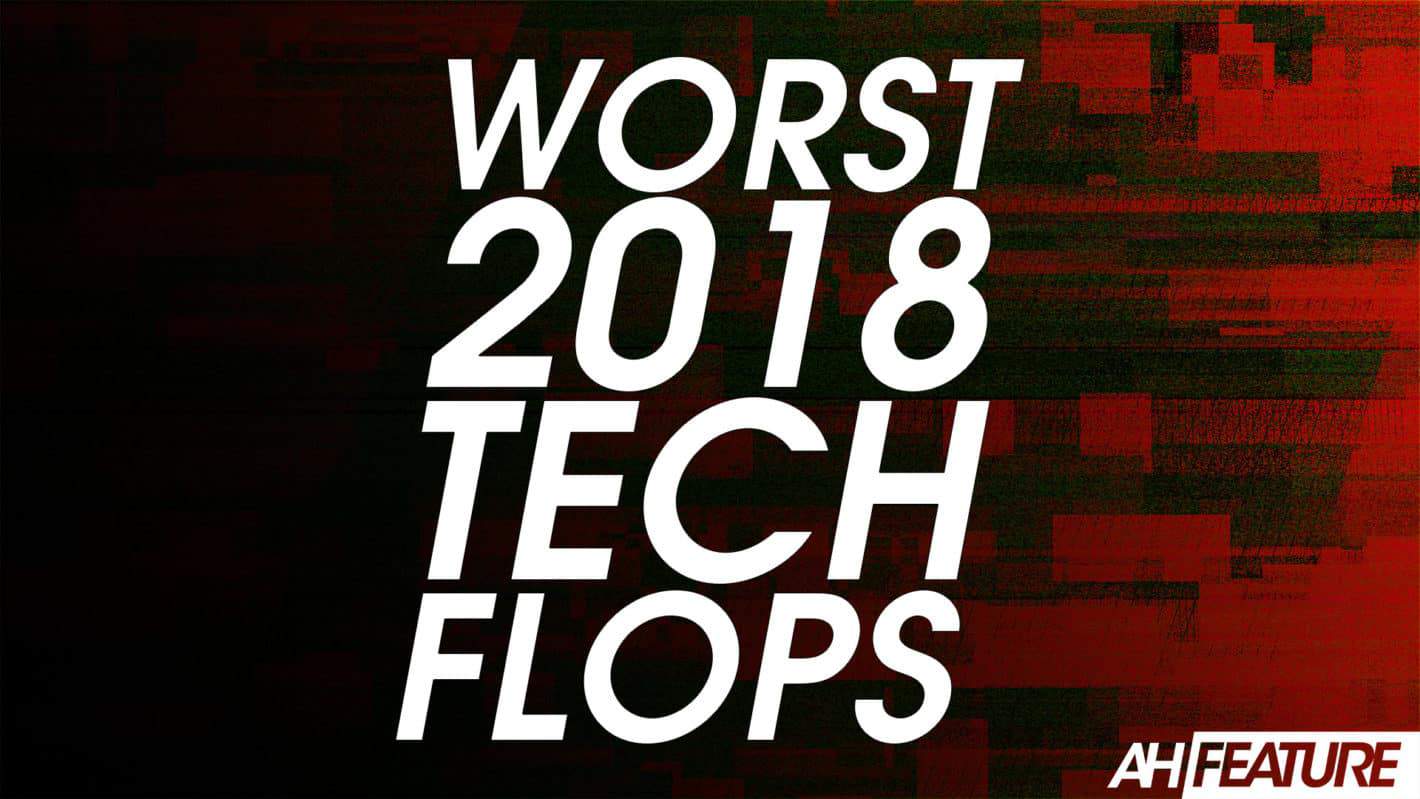 Here are the worst flops that emerged from the tech industry in 2018, not accounting for Google's craziness.

While 2018 has been a largely positive year for the technology industry in terms of new consumer-grade products and services, as well as improvements made to many existing solutions, it also wasn't without its failures. This year's largest tech flops came in various shapes or forms, from misguided products to baffling management decisions — not that the latter doesn't often lead to the former — which all demonstrated a fundamental misunderstanding of consumers. Without further ado, below you'll find what Android Headlines rates at 2018's worst flops in tech, just note that there are no Google-related items here because Alphabet's subsidiary made so many baffling decisions this year that it deserved a list of its own.

To say Facebook had a bad year would be an understatement. Its own management admitted to overestimating its revenue growth potential, it was at the center of several high-profile privacy debacles, including the controversial Cambridge Analytica scandal, it struggled to cope with the ongoing influx of fake news and general misinformation campaigns on its platform, and was consistently criticized for being careless about user privacy in its pursuit of better profit margins. So, what did Facebook do in response to those troubles? It launched a smart display series with a camera that follows you around the room. Duh!

To say the very nature of smart speakers and similar connected gadgets isn't inherently creepy would be dishonest; after all, you're giving away a lot of info to a faceless corporation whose primary interest is making money in exchange for some convenience, so it's actually kind of impressive Facebook somehow managed to make this concept even creepier. To make matters even worse, Facebook wants you to pay up to $350 for the privilege of having your online activity collected in an even more aggressive manner than ever before, so even if you're fine with the concept of smart displays and are willing to trust the Menlo Park-based social media giant yet again, you still have many better, more affordable options on the market to choose from.

ZTE – why clashing with the U.S. government is never a good idea

Chinese phone maker ZTE has been all over the place this year, though the verge of bankruptcy has certainly been its most frequently visited destination. The company spent months under a crippling denial order from the Commerce Department after violating a 2017 settlement which itself was a conclusion of previous violations of trade sanctions imposed on Iran and North Korea. It wasn't until a personal intervention from U.S. President Donald Trump that the federal government returned to the negotiating table and drafted a new deal which allowed ZTE to once again purchase and license American technologies so as to resume its operations but at the cost of close to a billion dollars in fines and a wide variety of concessions, including a complete overhaul of its board and management.

While ZTE managed to stay afloat and has resumed its operations in late summer, its latest clash with the Commerce Department is estimated to have cost it in excess of $3.5 billion in near-term losses, and there's no telling how massive of an impact will the debacle have on its business in the near future. Some industry watchers are now calling for a ZTExit in the United States or at the very least a major rebranding effort on the firm's part, though there are still no indications of such a plan being in the works. In overall, its troubles with the U.S. government are now pushing ZTE into irrelevancy in a number of major markets, and that's not even accounting for all the national security allegations it's facing from the U.S. and its allies which already prevented it from participating in the Western 5G race.

The smartwatch segment has been stagnating in recent years and while 2018 finally saw Qualcomm launch a new wearable chipset, the vast majority of the latest product releases failed to convince the existing user base to upgrade their devices or capture the attention of consumers who are yet to buy into this gadget category. That's precisely why LG's Watch W7 showed a lot of promise as it offered something different to the existing norm; while it's far from the first hybrid smartwatch on the market, it coupled the latest version of Wear OS with an actual, mechanical movement, as well as a premium build. LG's product formula still fell flat, with the Watch W7 being met with an abundance of negative reviews from both critics and consumers alike. Though one could certainly argue the device is simply misunderstood, there's no denying that it failed from a commercial perspective and disappointed most industry watchers who craved some variety in the smartwatch segment.

Palm – a solution to a problem nobody had

Whereas the LG Watch W7 failed to solve an established market issue, the resurrection of the Palm brand offered a solution to a problem nobody really had; it's technically a phone but not really since you need another phone for it to work as intended. It's also a low-end product in terms of specs but comes with a price tag of $350 that's enough for a much more capable mid-range offering these days. Ultimately, the Palm provides you with an extension of your handset, which is essentially what contemporary smartwatches do but comes in a much less convenient form factor, hence having extremely limited usability. At the end of the day, it's a unique gadget that everyone recognizes but nobody needs, thus being one of this year's most misguided mobile products.

RED Hydrogen One – holograms will have to wait

While some entries on this list didn't show a lot of promise from the very beginning, the idea of a modular holographic smartphone certainly sounded good on paper and still does. Unfortunately, RED's Hydrogen One isn't the solution consumers and critics were hoping for; while its modules remain non-existent, the holographic display of the device is also a blurry mess, whereas most of its other specifications aren't even worthy of the title of a 2018 flagship, let alone one that costs well in excess of $1,000. Coupled with a bizarre design that's extremely polarizing and the fact that RED seemingly forgot unconventional hardware needs software that takes advantage of it, this unique attempt at revolutionizing the smartphone industry fell flat on its face and would have probably been remembered better if it ended up being vaporware as many expected given its constant delays.