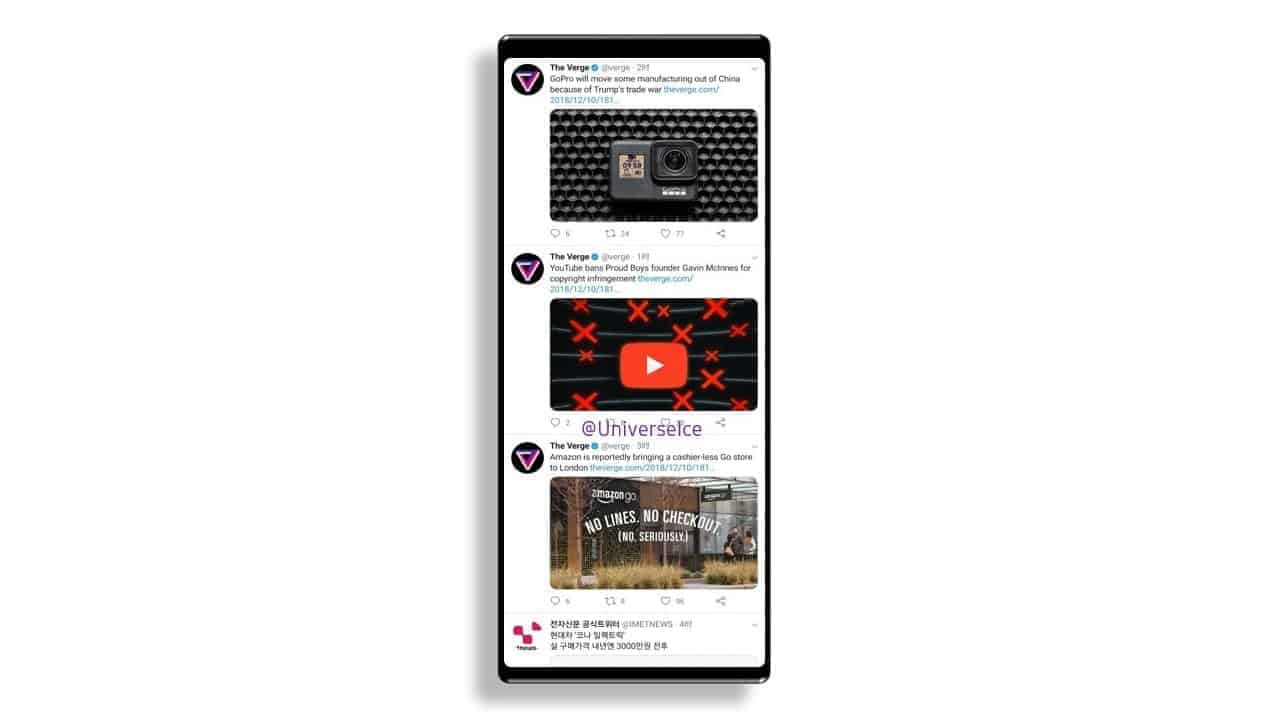 Ice Universe, a known industry insider based out of China, yesterday tweeted an alleged image of the unannounced Sony Xperia XZ4 without sharing any new specific of the high-end phone. The tweet, however, does reiterate that the handset will be among the first ones to feature a taller 21:9 display, a fact that has leaked numerous times in previous reports. The photo in question here looks rather sketchy with no design detail apparent even on a closer look, except for a tall display flanked by thin bezels. These top and bottom bezels appear marginally thinner than what previous leaks had suggested, though the difference isn't as discernible. As visible in this leaked image, Xperia XZ4's strikingly tall screen will be capable of displaying a larger portion of a page, not to mention the movie watching experience will be greatly improved since they are shot in a similar format.

Background: Earlier this month, the same tipster leaked a set of key specifications of the upcoming Sony flagship including some details about that display. The phone is said to include an LG-made 6.55-inch FHD+ display in the aforementioned 21:9 aspect ratio. At this point, it is still not known if it'd be an OLED or an LCD panel, though chances for the former are higher especially considering the current Sony flagship sports an HDR-capable OLED display. What's interesting in these leaked specifications is the return of a 3.5mm headphone jack, which the previous Xperia XZ-series phones ditched in line with most of the industry. The CAD-based photos of the phone leaked last month, on the other hand, had nothing to mention about the presence of an audio port. According to these specifications, Sony will also reposition the fingerprint scanner back to the phone's side, similar to what older Xperia phones had. Qualcomm's recently announced Snapdragon 855 chipset, 6GB of RAM, up to 256GB of onboard storage, a rear-placed triple camera setup, and a 3,900mAh battery have also been suggested for the device in this leak.

Impact: Even though including a markedly taller display will give Sony some bragging rights, it can pose serious trouble even with certain basic tasks like bringing down the notification shade, if the Japanese company fails to get the software right. The phone's leaked design raises some concerns regarding its pocketability and single-handed usage which can be duly answered only after a physical examination post its release. Sony will likely not announce the Xperia XZ4 at CES next month, and instead opt for a Mobile World Congress debut in late February. This is where Sony usually releases the first of its two flagships every year (the other being around late August/early September at IFA in Berlin). Sony doesn't typically announce any mobile products at CES, that is more the "Electronics" side of the company – think TVs, speakers, headphones, receivers, etc.

If the Sony Xperia XZ4 looks like this, do you like it? 😊
The advantage of 21:9 is that it can display more content and perfectly display 21:9 movies. pic.twitter.com/vruLP1FnAK