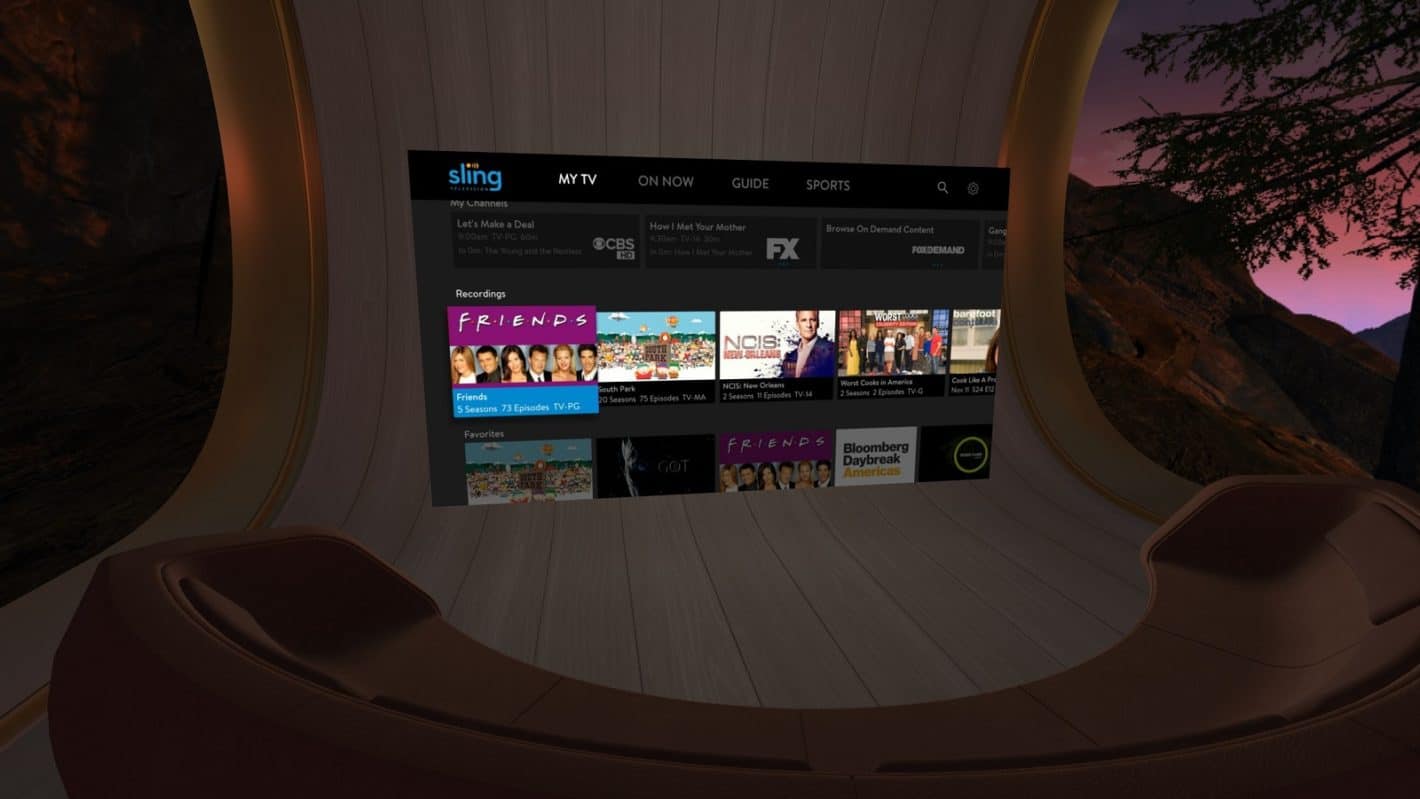 Sling TV is now available on Oculus Go offering those who have invested in the headset the option to partake in TV watching in virtual reality. Sling TV customers who already own the headset can immediately get started by downloading Sling TV from the Oculus app store starting from today. While Oculus Go headset owners who are new to Sling TV, will need to create an account either before or after downloading from the Oculus store before they can start watching.

For those new to both Sling TV and Oculus Go, it seems the launch of the new support comes with an added incentive as Sling TV has confirmed customers who purchase an Oculus Go and activate Sling TV on it will be eligible for $80 in credit which can be used against the costs associated with the company's subscription services. Which depending on the service tier chosen could equate to up to three months of service considering the plans start as low as $25 per month. To be eligible for this promotion the Oculus Go must have been purchased and activated between today and January 15, 2019. For more details on the promotion and how to claim the $80 Sling TV credit, click here.

In terms of TV access, this marks a fairly substantial change in consumption as there are multiple different newer technologies in effect here. While VR headsets are fairly new in the grand scheme of things, Oculus Go is one of the even newer breeds as it is designed to be an all-in-one solution which means users do not need to connect the headset to a PC or smartphone (although it does typically require a smartphone connection over Wi-Fi/Bluetooth during initial set up). In a similar way, Sling TV is a virtual multichannel video programming distributor (vMVPD) which also looks to loosen the dependency on wires by providing users with the option to access live TV and on-demand content from a wide variety of devices, including smartphones – and now VR headsets.

Of course, without the use of a smartphone or other intermediary device in the equation, the user will still need to access a connection point to be able to link up with Sling TV and this occurs through the use of Wi-Fi as Oculus Go is capable of connecting to Wi-Fi networks. With Sling TV now on board, this effectively means users can watch live TV content through Sling TV anywhere they are (and a Wi-Fi connection is accessible), irrespective of whether they have access to a TV, or even a smartphone.

Although this is a major development for live TV on Oculus Go, considering Sling TV is now the first major vMVPD to launch on the platform, it is only part of a much wider initiative launched by Oculus back in June of this year. Then, the company announced the launch of Oculus TV, a new VR experience for Oculus Go which is tailored to TV watching, with the inclusion of a room setting and the ability for users to consume content on a screen that equates in size to a 180-inch screen. Although at the time, the compatible services with Oculus TV were fairly limited with only Red Bull TV, Pluto TV, Newsy, Neverthink, and Facebook Watch signed up at launch. Now, however, with the launch of Sling TV support, the Oculus TV experience has gained a significant partner and in turn opened up the door to a significant number of users looking for a more robust live TV streaming option.

Ever since the launch of Sling TV, the company has been acting fast to ensure it rolls out new features and supports as quickly as it can. An approach which has helped Sling TV to become one of the leading options is the streaming market as it is now a service that’s available on a number of devices with the experience optimized and tailored to each unique form factor and platform. With this latest announcement, it is clear Sling TV also wants to ensure it is one of the front runners when it comes to VR live TV as in spite of the recent grown in the VR market, there’s still only limited ways in which consumers can access live TV content when wearing a headset, especially standalone ones, such as Oculus Go.

In spite of Sling TVs leadership in this sector, the streaming market and especially the live TV subsection is becoming an increasingly competitive market due to the number of services now offering comparable products at comparable prices. Price in particular has always been one of the areas Sling TV has managed to excel in as it has generally offered entry-level access at a cheapest price than the competition, although it was recently forced to increase the price a little which has brought the service even closer to the rest. As a means to offset against this, the company has been looking at ways it can add additional value to paying for live TV through its own solution and even when the price hike took effect, Sling TV looked to soften the blow through the an evolution of how content can be selected, in addition to confirming some limited content was becoming available for free.

While these added features do add some value to Sling TV, they are only useful once someone downloads and uses the app and for a lot of people that will be spearheaded by how much the main service costs. Although for some what might prove to be equally as important is the access points available and this is where Sling TV hopes to really make an impact and differentiate its service from other vMVPDs. A point the company was keen to make during the announcement as it confirmed Sling TV is now available on no less than 17 different platforms, easily making it one of the most accessible and platform-agnostic live TV services currently available.