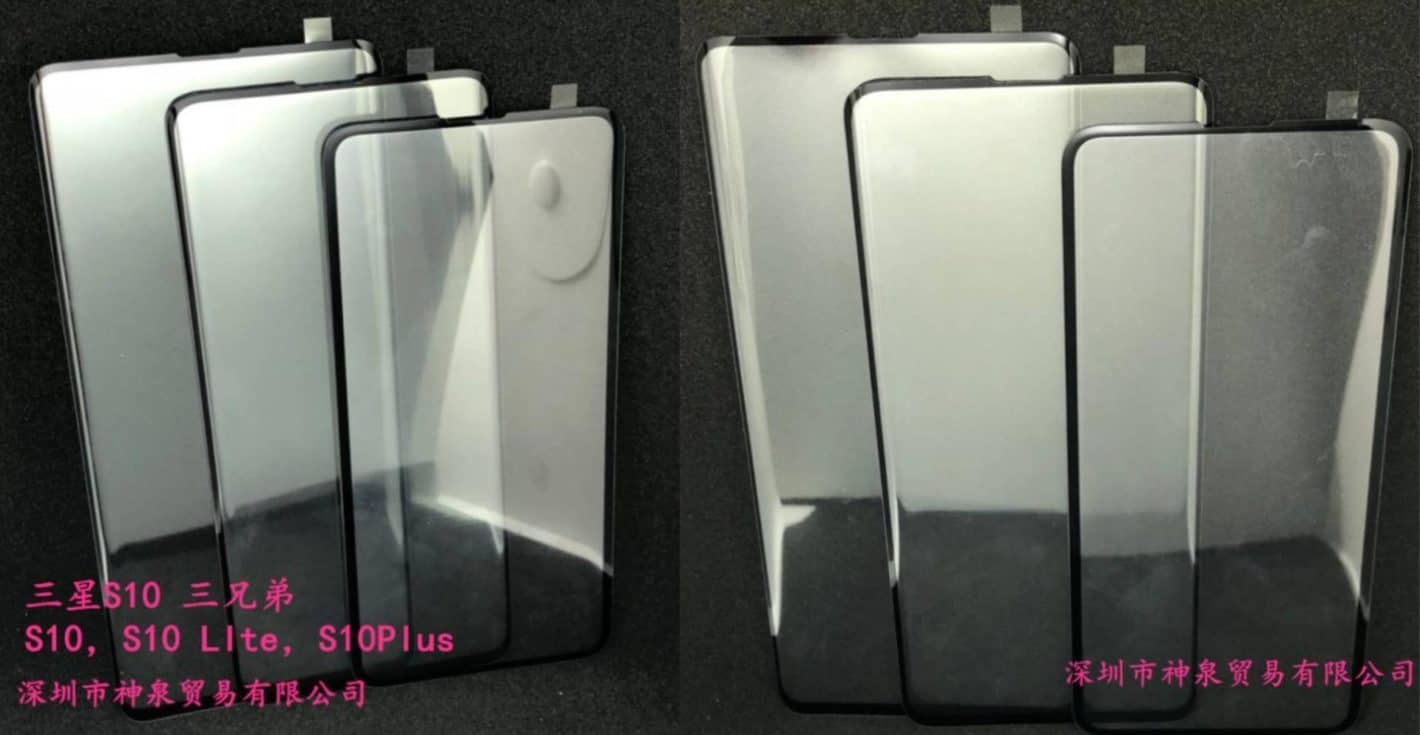 Screen protectors for no fewer than three long-expected Samsung Galaxy S10 models have emerged in a new leak shared via Twitter by industry insider Ice Universe. Those include the Samsung Galaxy S10 Lite, Galaxy S10, and Galaxy S10+ and each appears to betray a nearly bezel-free design for the handsets as well as confirming earlier leaks. As noted by the source, the Samsung Galaxy S10 Lite holds a particular interest since the image seems to confirm that 'budget-friendly' variant of the flagship will ship with a flat screen surrounded on all sides by a bezel of equal width. The other two screen protectors are shown with curved left and right edges. The screen protectors are referred to as being of the 'film' variety but appear to be comprised of curved glass and show a black-colored edge where the bezels would be. For all three devices, a small cutout for the top-edge earpiece is apparent.

Background: Previous leaks for Samsung's Galaxy S10 family had indicated in both rumors and purported imagery that camera cutouts in the display would be used instead of notches. That would reduce the amount of screen real estate taken up by those sensors but would also eliminate the notch that both users and reviewers generally don't like. In particular, at least one recent leak pertaining to a glass cover for the Samsung Galaxy S10 featured a cutout at the top-right-hand side of the display but that appears to be missing from these seemingly more recent images. That doesn't necessarily mean that there won't be a camera cutout in the display itself but depending on the material used for the screen protector, a cutout there won't necessarily be required.

News of three Samsung Galaxy S10 models isn't new either and has been expected since very soon after the initial launch of the Galaxy S9 family. The new images seem to confirm that and showcase three protectors in sizes that marginally increase from one handset to the next beginning with the smallest Samsung Galaxy S10 Lite. Expected to be sold under the model number SM-G970 and engineered under the codename 'Beyond 0', the Galaxy S10 Lite is predicted to arrive with a 5.8-inch panel and 4GB RAM. The standard Galaxy S10 is conversely designated the model and codename SM-G973 and 'Beyond 1' with 6GB of RAM and a 6.1-inch display panel. At 6.4-inches, the Galaxy S10+ is expected to arrive under model the designation SM-G975 and the codename 'Beyond 2' with 8GB RAM under the hood.

A fourth, 5G-enabled variant has been leaked prior to the appearance of screen protectors too but isn't predicted to launch alongside the others. Since it will be dependent on those next-generation networks, it's been estimated that will ship later but will include 12GB RAM and be launched with 1TB of storage in a 6.7-inch form factor. That model would also likely differ in terms of other internal specs, using the same Snapdragon 855 chipset expected with the US and China variants of its siblings. The international variant of those other devices is predicted to use Samsung's own Exynos 9280 SoC while Qualcomm's chipset can be coupled with the Snapdragon x50 modem for 5G.  The newest leaks seem to confirm that handset isn't quite as far along as the others or isn't being pushed as hard while 5G is still not widespread.

Impact: Samsung will most likely be showing its Galaxy S10 family at the upcoming MWC 2019 event in Barcelona, following its traditional method of announcements. That should also mean that teaser materials from the company hinting at or possibly confirming some of these leaked features will begin appearing over the course of the next month. That also lines up neatly with the Android 9 Pie beta tests that have been run by Samsung over the past several months, eventually leading up to the launch of its One UI in conjunction with the new devices. It's not likely that Samsung's next flagships will launch with Android Oreo out of the box and those tests have been increasingly refined. The company has also begun releasing footage of the new UI, implying that the software that will likely ship on the next-gen smartphones is nearing completion.