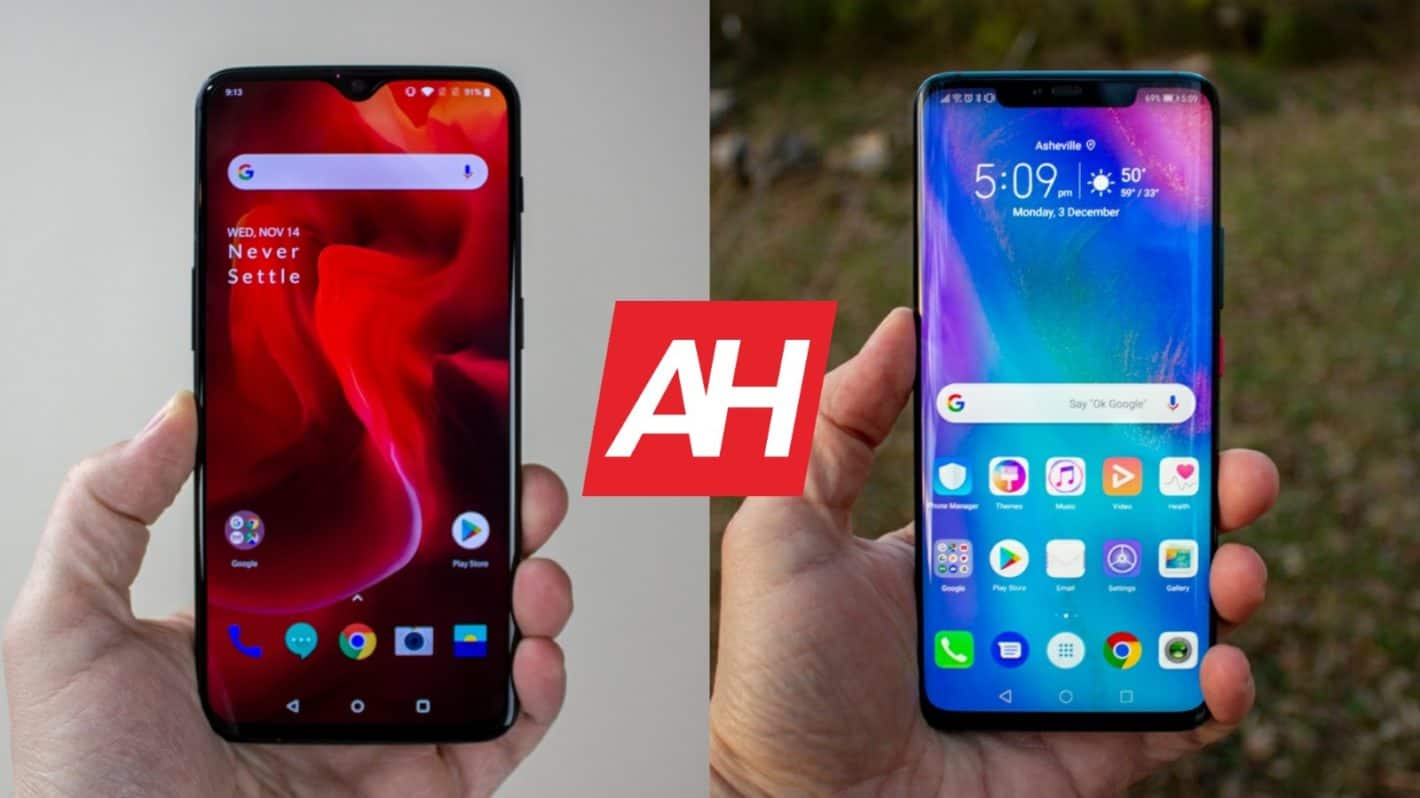 The OnePlus 6T and Huawei Mate 20 Pro are not only flagship smartphones for their respective companies, but they've both launched in November this year, a month ago. Many of you are probably trying to decide which of these two phones to get, even though the difference in price tags is quite significant, but these two phones are definitely comparable. Well, we're here to help you with that, as we'll do our best to compare the two devices. Each of these smartphones has its positive and negative sides, as is the case with every other phone, but when comparing the two, those pluses and minuses have even more meaning. That being said, let's kick things off with spec sheets, shall we.

The OnePlus 6T and Huawei Mate 20 Pro are both made out of metal and glass, but despite that fact, they feel considerably different in hand. The two devices have the very same display aspect ratio, and even though the display size is almost identical, the Mate 20 Pro is considerably narrower at 72.3mm, while the OnePlus 6T stands at 74.8mm. The two devices are almost equally tall and thick, while they weight approximately the same as well. The one thing that differentiates the Huawei Mate 20 Pro in terms of in-hand feel is the coating that Huawei applied on the back of the phone, and that coating not only reflects fingerprints, but also makes the phone grippier in hand. The OnePlus 6T Midnight Black, Thunder Purple, and McLaren Edition variants also repel fingerprints really well, mainly because of the design of the glass back, the same cannot be said for the Mirror Black OnePlus 6T, though. As far as looks, in general, is concerned, the OnePlus 6T will probably take the cake for most people, as it has a considerably smaller display notch, and a nicer looking camera setup on the back, as it has less cameras to deal with.

Both of these phones ship with OLED panels, though truth be said, considerably different panels. The OnePlus 6T comes with a 6.41-inch fullHD+ (2340 x 1080) Optic AMOLED display, while the Huawei Mate 20 Pro sports a 6.39-inch QHD+ (3120 x 1440) AMOLED panel. Display aspect ratio is the same on both phones, but the Mate 20 Pro's display is much sharper. Most users will not notice the difference in day-to-day use, as the panel on the OnePlus 6T is excellent, and you will not notice any pixelization or anything of the sort. The OnePlus 6T comes with Corning's Gorilla Glass 6 protection on top of its display, while the Huawei Mate 20 also has the Gorilla Glass protection on top, but an unspecified version. The Huawei Mate 20 Pro does have a much sharper display and it does look better in real life, so regardless of the unspecified Gorilla Glass version, it takes the win in this category.

Both of these phones are true powerhouses, the OnePlus 6T not only comes with the Snapdragon 845 64-bit octa-core processor, but it offers one of the most optimized software experiences on Android, if not the most optimized one. The Huawei Mate 20 Pro, on the other hand, comes with Huawei's most powerful chip to date, the Kirin 980, and its software is considerably heavier, but that does not really slow down this phone all that much. All in all, both of these devices have extremely powerful internals, processors are just a part of the picture, but if we were to look at sheer day-to-day performance, the OnePlus 6T is the winner here. The OnePlus 6T is one of the smoothest-performing smartphones out there, and some would say it trumps even the Pixel 3 in that regard. The Huawei Mate 20 Pro is up there, but you'll encounter occasional hiccup more often on the Huawei Mate 20 Pro, than you will on the OnePlus 6T.

The OnePlus 6T and Huawei Mate 20 Pro are both beasts when it comes to the battery life. The OnePlus 6T comes with a 3,700mAh non-removable battery on the inside, while the Huawei Mate 20 Pro packs in a 4,200mAh battery. Truth be said, these two phones are probably amongst the best flagship-grade smartphones out there when it comes to battery life, as each of these phones will get you through the day without a problem and then some, though that will all depend on the way you use your phone. The OnePlus 6T may have a smaller battery, but it has a highly-optimized software included in the package, while the Huawei Mate 20 Pro has a larger battery pack, and also a ton of additional battery-related tweaks that can boost that battery life even further. We were able to get over 6 hours of screen on time with both of these phones with ease, in our usage tests, though we have to give a slight edge to the Huawei Mate 20 Pro here, as Huawei did manage to squeeze in a larger battery on the inside while not making the phone much thicker, and it does offer a ton of battery-related tweaks which enable this phone to offer better battery life overall, just do keep in mind that neither of these phones will disappoint in the battery life department, so both are a great choice in that regard.