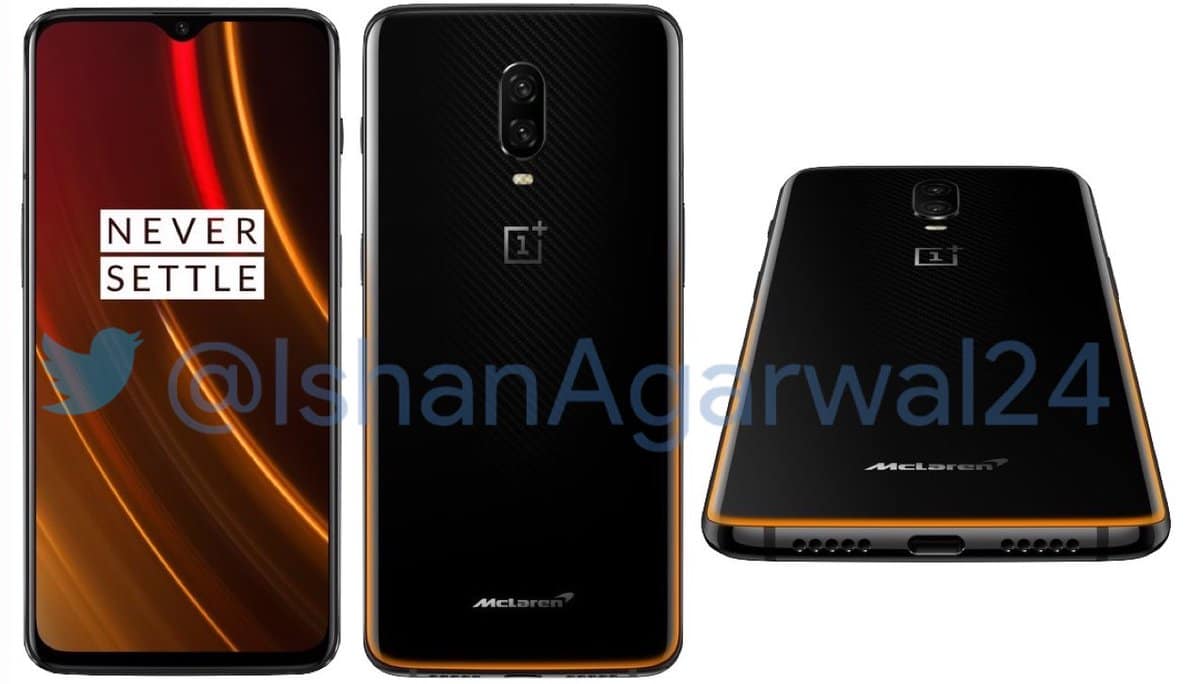 Earlier today, OnePlus India's official Twitter account hinted that the charging speeds may be further improved on the OnePlus 6T McLaren Edition, and the phone's promotional materials have just surfaced, and more or less confirm that info, not to mention that they give us the very first look at the whole device. Now, there's much to talk about here, so let's start with the design, shall we. As you can see, this is not your regular black-colored OnePlus 6T, not at all, this phone actually has orange hints on the sides of its back cover, and the source says this is actually a "Speed Orange" variant of the phone, and it remains to be seen if more than one variant will be available. That's not all, though, if you take a closer look at the phone's back, you will notice that the under-the-glass pattern is different compared to the other OnePlus 6T variants, considerably different. That will make a difference only in terms of the phone's looks, of course, as the glass panel will probably remain unchanged. Both OnePlus' and McLaren's logo are included on the back of the device, and the design as a whole remains the same, there are some Orange hints there, and a different under-the-glass pattern, but the phone as a whole is the same, will sport the same dimensions as well. Now, when you look at the device from the front, you'd think that this is the regular OnePlus 6T, as there is no difference here, it looks the same as any other OnePlus 6T variant.

In addition to renders of the device, the source also shared some additional info when it comes to this phone. The official name of this variant will be the "OnePlus 6T McLaren Edition", as previously thought, and the device will ship with "Warp Charge 30", next to which it says that it will provide "a day's power in 20 minutes". OnePlus is stepping away from the "Dash Charge" branding due to some legal issues, but the company did trademark "Warp Charge" name earlier this year, so it seems like it will be put to use here, as it was not mentioned during the OnePlus 6T's launch, nor in its marketing materials. The "a day's power in 20 minutes" suggests that it will be faster than the OnePlus 6T's charging, as OnePlus usually uses the "a day's power in 30 minutes" phrase when marketing Dash Charge, which is yet another hint that this may be 50W charging that is inspired by OPPO's Super VOOC charging tech. On top of all that, these marketing materials say that the phone will ship with 10GB of RAM, as rumored, which means that it will have more RAM than any other OnePlus phone, ever.

Background: OnePlus had announced a joint event with McLaren for December 11, and that event will be hosted in London, UK: The OnePlus 6T McLaren Edition will be introduced during the event, that much is obvious at this point, and considering some changes in terms of specs, this phone will be more expensive than the most expensive OnePlus 6T variant, that's for sure. Chances are that the device will be available in a number of markets, and other than the RAM change, and a possible change in charging speed, this phone may actually ship with more RAM than any other OnePlus 6T variant, quite probably 512GB. All the other specs will probably remain the same, though.

Impact: OnePlus tends to release at least one "special edition" variant of its flagship smartphone per cycle, that goes for every flagship phone that the company releases, and the same will happen with the OnePlus 6T, it seems. All the other "special edition" OnePlus devices sported the same specs as the regular models, the top-of-the-line regular model, but the McLaren Edition phone will take things to a whole new level, it seems, as it will become the first special edition OnePlus phone that will introduce some spec-related changes.