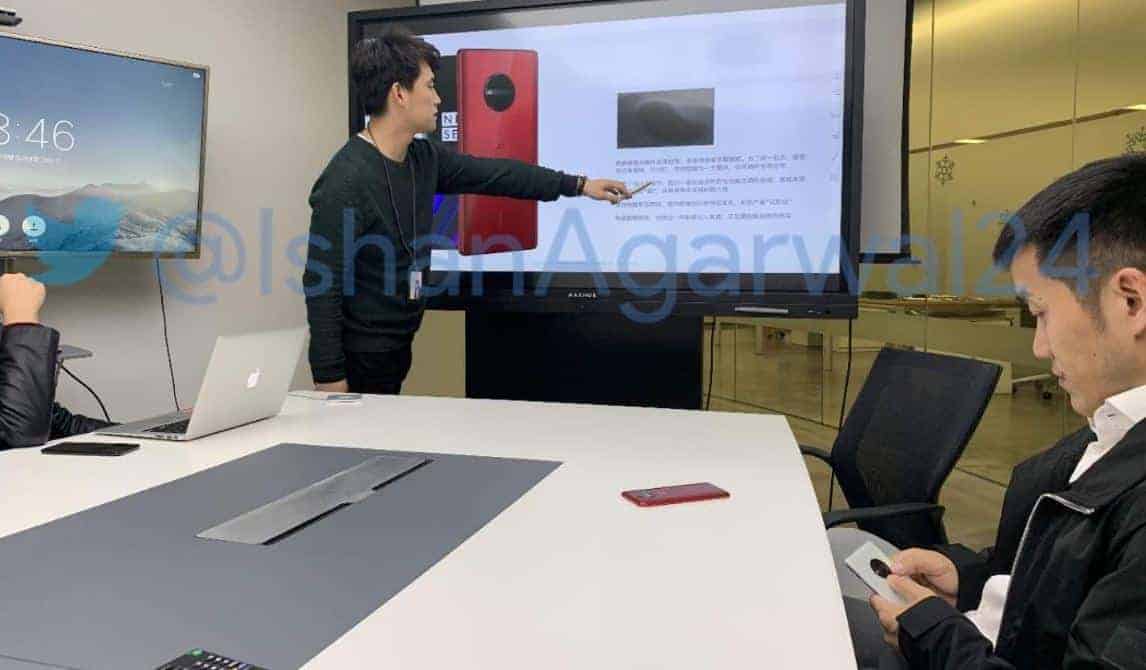 A device concept said to represent one of the upcoming OnePlus Android smartphones meant to be released in 2019 emerged online earlier today, having been shown in a real-life image showing what appears to be a company meeting. The photograph that can be seen above reveals not only several prototypes of a device the Chinese manufacturer now appears to be developing but also OnePlus co-founder and Chief Executive Officer Pete Lau who's handling one of those pre-production units. The leak itself is uncharacteristically brazen seeing as it shows a small meeting and the company will hence likely have little issues with identifying the author of the newly emerged image. While there are no guarantees the photograph doesn't show an already scrapped device concept envisioned years ago, the overall design is unlike anything OnePlus commercialized in the past and appears to be the only focus of the leaked gathering.

A page from Motorola's book

One of the most defining features of the leaked prototype is a circular camera module on the back of the device which appears to be housing numerous imaging sensors, as well as an LED flash strip. The setup also appears to be slightly protruding from the prototype's rear plate, with its overall look being somewhat reminiscent of Motorola's contemporary Android smartphones that are part of the Moto lineup. The Shenzhen-based phone maker produced at least three experimental variants of the newly sighted concept – white, black, and red. The source of the photograph is a known tech leaker Ishan Agarwal who claims the image was sent anonymously. While there's no way of telling whether OnePlus will be commercializing something akin to this leaked concept, the development suggests the firm is at the very least considering revamping its rear camera philosophy for the third year in a row. Following a move to dual rear cameras with the OnePlus 5 and 5T, the firm ditched its original horizontal lens alignment for a vertical one with the OnePlus 6 and 6T launched over the course of 2018. A shift toward larger, bulkier imaging modules could be indicative of an ambition to embrace more than two rear cameras on the company's part, which is something that's already been rumored for several months now.

More cameras on the horizon

The OnePlus brand as a whole primarily made a name for itself due to its value-oriented strategy and as it's been traditionally the weakest in the mobile photography department (relative to its peers), the company already started paying more attention to the cameras of its Android-powered handsets. As triple-lens systems are now gaining traction in the world of smartphones, it stands to reason OnePlus is looking to jump on that innovation wagon as quickly as possible, much like it did with in-display fingerprint readers and dual-camera setups beforehand. Whether the newly leaked prototype ends up being the basis for one of its 2019 smartphones remains to be seen but OnePlus often claimed it's prone to aggressive experimentation in the past so based on those comments alone, it's just as likely that the concept ends up being scrapped for something less Moto-like.

By most accounts, 2019 will be OnePlus's busiest year to date; the company is expecting to ship a record number of devices throughout the following twelve months thanks to its consistent growth fueled by carrier deals around the globe, including a blockbuster distribution agreement with the American branch of T-Mobile, its largest wireless win to date. OnePlus also already confirmed it's planning to continue with its six-month product revision cycles moving forward and is also planning to launch another mobile lineup compatible with the fifth generation of wireless networks. In other words, 2019 should see the release of the OnePlus 7, OnePlus 7T, and at least one more 5G-ready device which will be launched in the U.S. and possibly some other markets. While not many details about its upcoming devices are currently known, more price hikes are expected as OnePlus is currently in the process of executing the next step in its long-term strategy – improving its profit margins following a period of strong growth that still appears to be far from over. Due to that state of affairs, none of its 2019 products are likely to be touted as highly affordable, though they should still be focused on offering significant value for money, something that's not always a major consideration for phone makers competing in the highest price bracket. Ultimately, even as the global smartphone market stagnated since late 2017 across the board, OnePlus managed to continue improving its performance and will surely be entering 2019 in high spirits.