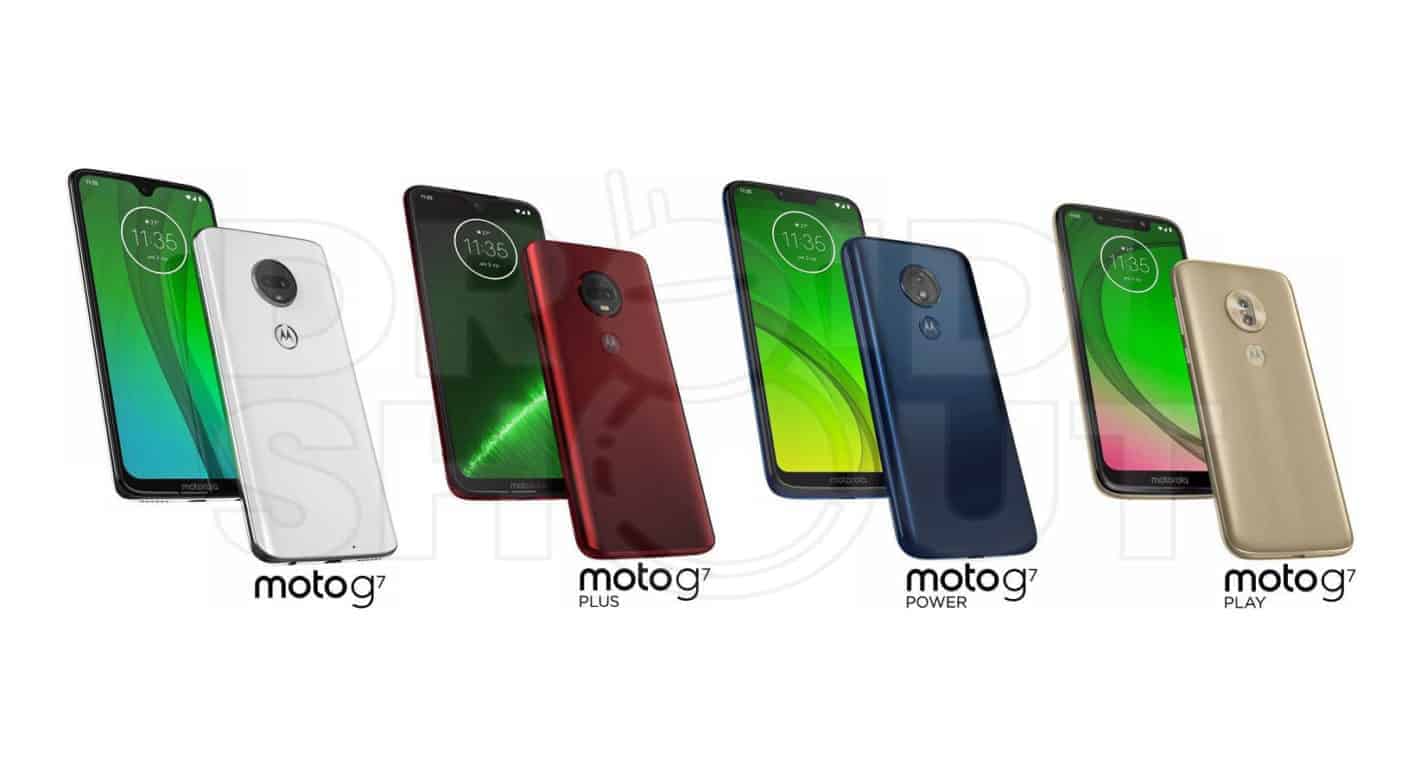 A render depicting what appears to be the entirety of Motorola's Moto G7 lineup planned to be released in 2019 leaked online earlier today, revealing a somewhat generic-looking range of Android devices which have already been the subject of many rumors. The image that can be seen above shows what are purported to be the Moto G7, Moto G7 Plus, Moto G7 Play, and the Moto G7 Power, with the main takeaway from the leak being that the company's most popular smartphone series to date will be fully embracing the notch starting next year. The Moto G7 and its Plus-branded peer feature waterdrop-style cutouts which are relatively minimal and house one front-facing camera each, which is a first for the Lenovo-owned electronics manufacturer, whereas the other two devices sport significantly larger notches akin to the ones seen on some of the company's Android handsets released over the course of this year. Even as their sizes differ, the screens of the four Android smartphones all appear to be using a 19:9 aspect ratio, a standard image format of notched panels. The addition of the said cutouts should allow Motorola to further improve the screen-to-body ratio of its devices, though the company doesn't appear to be interested in making any other major design changes to its 2019 mid-range line.

While the Moto G7 Play appears to be offering a dual-camera setup on the front, it's presently unclear how Motorola will justify the oversized cutout found on the Moto G7 Power which doesn't appear to feature a secondary imaging sensor at the top of its display. The very name of the device is also indicative of a new strategy change on the company's part, though it remains to be seen whether the handset will be presented as a direct follow-up to this year's Motorola One Power (P30 Note) line or an officially unrelated expansion of the Moto G range. All four leaked Android phones are also equipped with two cameras on the back, situated inside circular modules protruding from their back panels ever so slightly, which results in a design that will be familiar to anyone who encountered a contemporary Android smartphone from Lenovo's subsidiary. Today's leak indicates the existence of white, blue, red, and gold variants of the upcoming devices, though Motorola will likely reserve some colors for specific models and markets, much like it's been doing in the past. Finally, the four handsets appear to be sporting rear-mounted fingerprint readers in the form of Motorola's signature batwing logo.

For the U.S. and beyond

Recently sighted product certifications suggested most or even all members of the Moto G7 range will be coming to the U.S. and support virtually every stateside network. The newly emerged render is also mostly in line with a late November sighting of the Moto G7 Play, with the only exception being that the original leak suggested the handset will only feature a single rear camera. The Play-branded member of the new Android family is expected to launch with Qualcomm's Snapdragon 636, a mid-range system-on-chip focused on energy-efficiency and consistency. The Moto G7 Plus should have the highest-capacity battery and largest screen of the bunch, with the product lineup itself being expected to debut in the first half of the next year. While the Moto G6 series launched this May, Motorola traditionally revises its mainstream mid-range line at Mobile World Congress, the world's largest trade show of its kind taking place in Barcelona in late February. This year proved to be an exception to the norm as the company was undergoing some senior management changes and ended up with a new president as Sergio Buniac replaced Aymar de Lencquesaing but the manufacturer is likely to return to its regular product release schedule in 2019 and bring the entire Moto G7 range to the next iteration of MWC.

By most accounts, Motorola appears to be playing it safe with the 2019 refresh of the Moto G line, which is unsurprising in light of the fact that this range remains popular all over the world. Even in the United States where the company is having difficulties establishing itself with carriers, its Moto G handsets are still top performers in the unlocked segment, largely due to its partnership with Amazon. And while the don't-fix-what-isn't-broken strategy worked for this particular product series in the past, Lenovo's mobile business as a whole is currently struggling and even Motorola's most established offerings are becoming more generic as years go by, with that trend now apparently being set to continue in 2019. Motorola will likely once again be focusing on the software experience as one of the key selling points of its next Android mid-rangers, in addition to pitching its devices as the ultimate-value proposition in the mobile segment. Whether that will be enough for a successful 2019 remains to be seen, though the latest leak suggests that even as Motorola has been streamlining its overall mobile portfolio throughout 2018, it will be going in the opposite direction with the Moto G range next year and expand the lineup with one entirely new model that will presumably be focused on offering long battery life.

As was the case in recent years, the Lenovo-owned OEM will likely be primarily advertising the incoming Moto G devices to younger demographics, presenting them as quirky and versatile in a series of equally quirky and versatile ads. American consumers who happen to be Amazon Prime subscribers can also count on at least some of the newly leaked smartphones launching as one of many limited offers of Amazon's e-commerce service in 2019 which traditionally offers significantly discounted prices on select electronics and doesn't even pre-load them with ads as of early 2018. Ultimately, there's little doubt that the Moto G7 line will be one of the most value-oriented Android smartphone series of 2019 but whether that will be enough for Motorola to continue expanding its global footprint remains to be seen, especially in extremely competitive markets such as the U.S. where the company presently isn't enjoying strong support from the wireless segment.