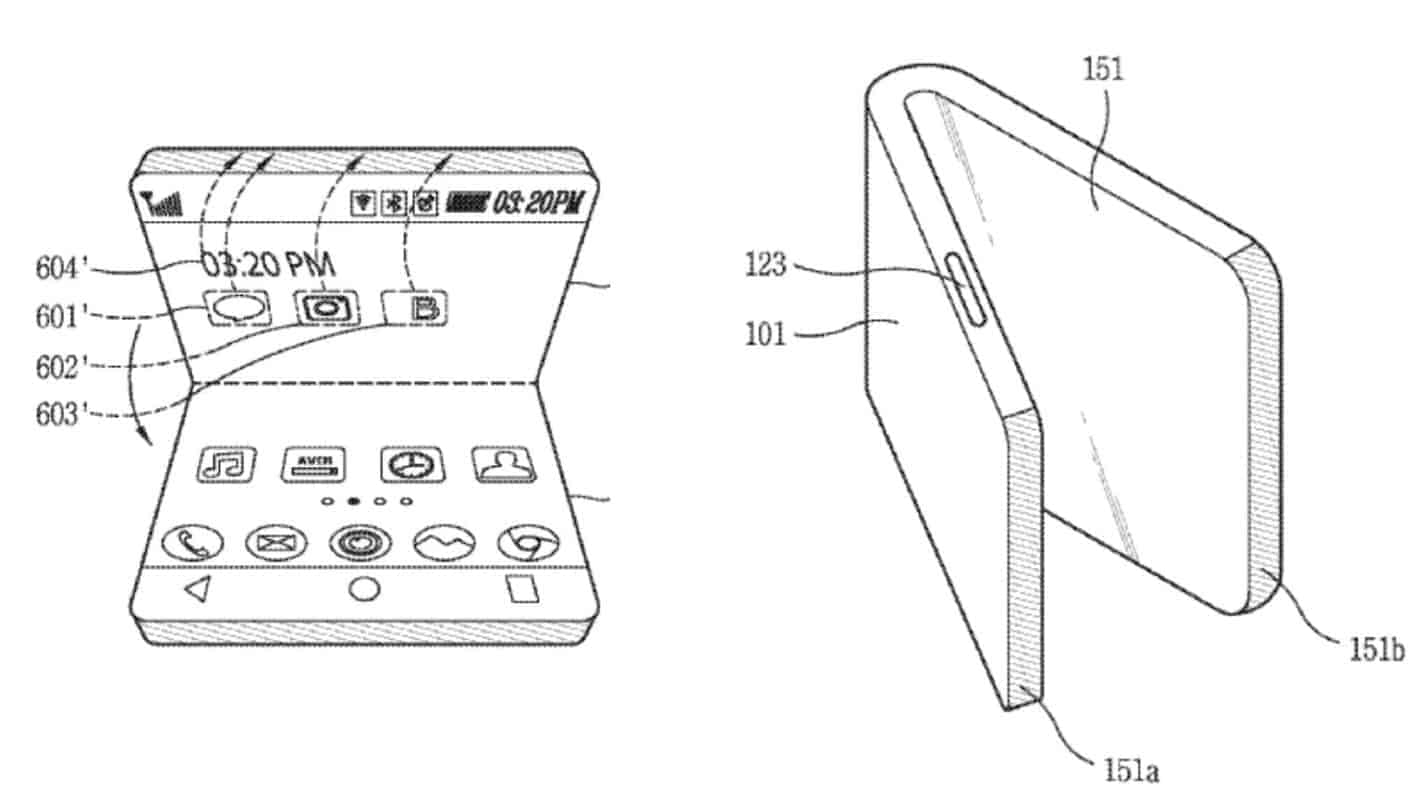 LG Electronics is presently exploring a number of new foldable phone form factors, including a design that resembles Nintendo’s cult portable gaming console, the Game Boy Advance. According to newly emerged intellectual property documentation reviewed by Android Headlines, the South Korean tech giant is currently looking at two distinct takes on the bendable handset concept; one of those involves a booklet-like device with curved edges which folds outward and is essentially an evolution of a two-screen form factor ZTE introduced last year with the Axon M which replaces two hinge-connected displays with a single foldable module.

When folded, the booklet-style gadget can display at-glance notifications via its edges which can also be used for music playback controls, according to LG’s concept. An always-on display is also part of the package and is supported by both screens of the handset, as well as its edges, depending on the exact mode of operation that’s in use at any particular time. While LG’s sketches depict a device with relatively regular-sized bezels, the size of the thereof isn’t the subject of the company’s latest IP filings.

The concept that resembles Nintendo’s GBA is depicted above and folds in two largely square portions. LG is still understood to be exploring various potential use cases of that design but its similarities with the aforementioned portable console are clearly indicative of at least one of them – gaming. When folded in a manner that has the two parts of the screen sit at a 90-degree angle in relation to each other, the contraption can be used as a dedicated gaming device whereas its bottom half displays digital controls, whereas the action happens on the upper portion of the screen.

Both concepts feature curved displays and their edges are also meant to be in use while they’re completely folded out. In those scenarios, the interactive sides of the screen act much like the Edge Display tech does on Samsung’s contemporary Android flagships; they can be used as app and action shortcuts, in addition to delivering at-glance information such as news headlines, weather forecasts, and excerpts from received messages. While LG already patented both solutions, there’s no indication that the company is planning to commercialize either in the near future.

As experimental as they come

Numerous original equipment manufacturers are presently pursuing foldable smartphones and the Android ecosystem is largely expected to be the first to deliver such consumer-grade products. Samsung is widely expected to unveil its seminal bendable handset no later than Mobile World Congress 2019 which is kicking off in late February and Huawei is expected to follow suit, possibly at the same event. Samsung is still the only major company to have unveiled a viable user-foldable phone panel in the form of the Infinity Flex, an unconventional OLED module showcased at this year’s iteration of its San Francisco developer conference in early November. Whereas Samsung’s first foldable Android phone is said to be akin to a booklet, Huawei’s efforts in the segment are less clear and the only reliable spec info that emerged so far is that its unconventional product will also feature the ability to communicate with the fifth generation of mobile networks, thus introducing a number of firsts for the Chinese company.

Motorola, Sony, OPPO, Xiaomi, and many other phone makers are also currently exploring foldable handsets but aren’t as close as commercializing them, with their efforts remaining in a highly experimental phase of development. LG is somewhere between those two worlds; the OEM already communicated its ambition to launch a bendable Android smartphone by the end of 2019 but said it isn’t concerned about being the first to do so. Instead, it’s aiming to produce the world’s “most interesting foldable,” a company official told Android Headlines in early October. Over the course of the last several years, LG explored numerous highly distinct takes on the concept of bendable handsets; besides the two newly uncovered ones, the South Korean technology juggernaut also considered a gadget akin to a miniature laptop that features two batteries and two 3.5mm headphone jacks, as well as various asymmetrical designs. LG also already moved to trademark a number of possible names for its foldable product lineup, including Foldi, Flex, and Duplex, all of which were formally secured as its intellectual property late last month.

A return to roots – kind of

LG is the world’s first mainstream OEM to have attempted commercializing the concept of flexible smartphones, having originally tried to do so with the G Flex, a device with a P-OLED screen released five years back. While it followed up on it with the G Flex2 in 2015, the lack of commercial success prompted it to put the project on hold. Back then, LG officials suggested they believe the lineup was ahead of its time and requires major technological advancements in order to be truly brought to life. Today, those innovations are here, though they were largely spearheaded by Samsung’s display manufacturing division. Still, LG is unlikely to be licensing any major tech from its largest domestic rival and instead appears committed to further developing its P-OLED solutions until they can allow for truly foldable Android handsets.

Most OEMs already communicated they believe the bendable form factor is extremely commercially viable, though first-generation solutions based on the thereof are likely to be far from perfect; manufacturing techniques are still trying to catch up with those ideas and while creating viable prototypes is something the industry has already been capable of for several years now, producing those devices on a scale is an entirely different challenge and one that even market leader Samsung is currently concerned about, as evidenced by an abundance of reports suggesting the first Galaxy-branded foldable phone will have an initial production batch in the low six figures, a far cry from millions of mainstream flagships the Seoul-based tech giant produces on an annual basis. Regardless, even if foldable (Android) smartphones are expected to debut in a relatively quiet manner, the new form factor will be coming to stay, most industry watchers believe.l