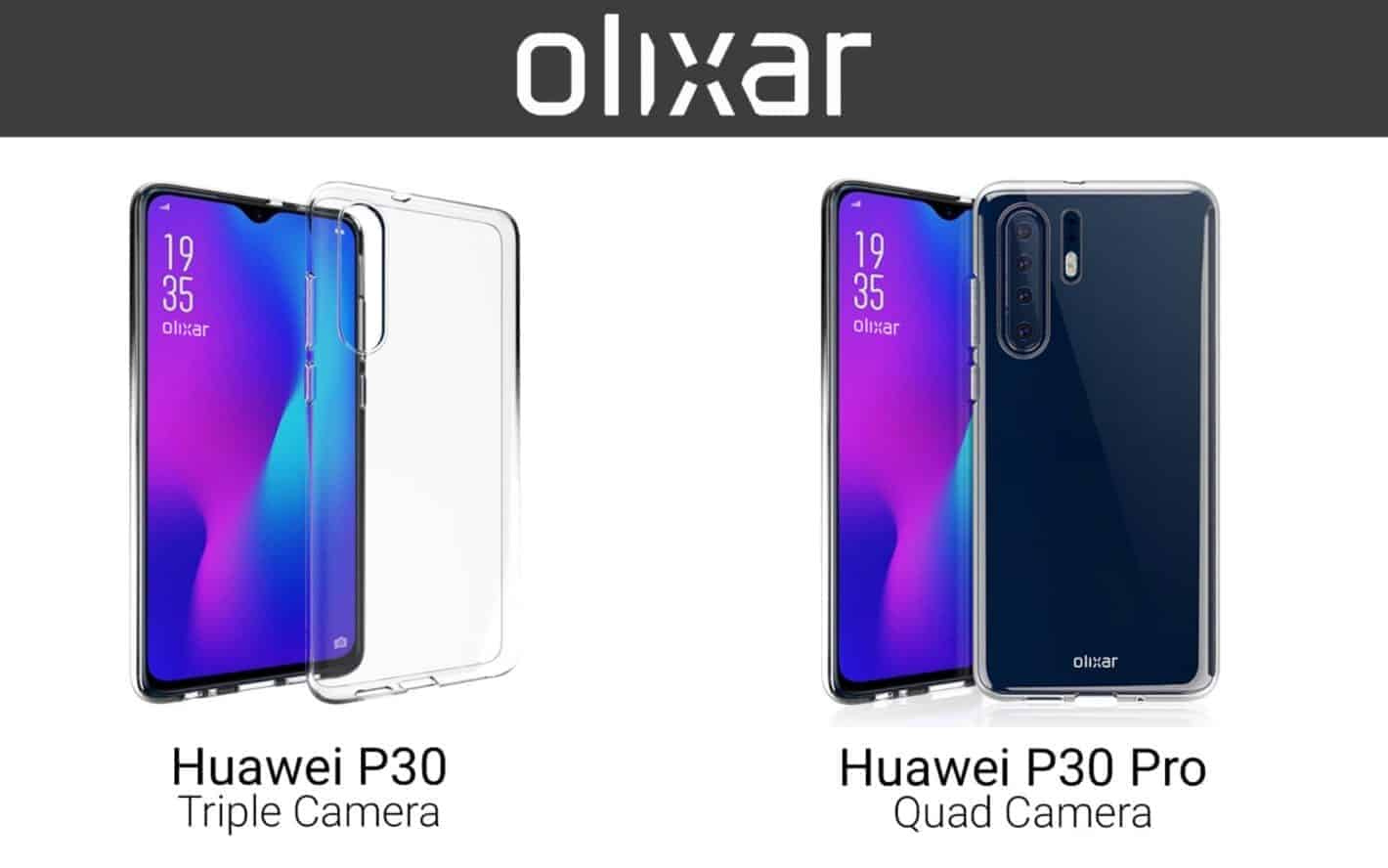 The design language of Huawei's P30 and P30 Pro have been leaked once more but this time in official case renders received by Android Headlines and official pre-order listings on MobileFun from accessory manufacturer Olixar. Beginning with the case designs, there is four total for the Huawei P30 Pro, with some color variations. The rugged NovaShield Bumper Case comes in a more stylish black configuration with extra bumper padding for $13.99. A malleable TPU FlexiShield Case in either blue or black is available from $5.49 while an Ultra-Thin Case that's "100% clear" costs just a couple of dollars more. Finally, the heavily-ruggedized ArmourDillo Protective Case is available in either black or blue colors and costs $10.99 at presale. The Huawei P30 cases currently listed for pre-order only include the FlexiShield and Ultra-Thin variations but are priced the same.

Background: The case renders also give away at least a few details about the devices themselves in a more official capacity. To begin with, the images show a Huawei P30 range that includes a waterdrop-style notch at the top of the display panel instead of the ‘Punch-Hole’ design. That’s not entirely unexpected since the only OLED panels currently shipping with cutouts are from Samsung but the design is in use on the upcoming Huawei Nova 4. An in-display camera set in a ‘Punch-Hole’ is also rumored to make an appearance on the View 20 set to be released by Huawei subsidiary Honor. Moving to the back of the device, it is also revealed that the Huawei P30 will feature three rear cameras in a vertical orientation while the P30 Pro will have an additional camera. Those will still be in a vertical orientation on the larger handset and a secondary vertical flash is shown accompanying the sensors in the images alongside the standard horizontal flash below the main sensor.

Cutouts in the new case design also seem to go in opposition to previous leaks which seemed to show that no 3.5mm headphone jack will still be present for either handset in the Huawei P30 family. A small circular hole is present at the top for both devices that seems as though it could match up with just such a port. That could be intended for a microphone opening but it does appear slightly larger than the standard cut-out for that component. Along the other side, holes are clearly placed for a bottom-firing speaker and the expected USB Type-C charging port as well as a smaller hole that's presumably for a microphone. For either device, the power button and volume rocker are positioned along the right-hand edge. No cutouts are present for a fingerprint scanner and there also isn't one shown on the front or edges of the device itself in any of the images. That could mean that Huawei isn't including one or that it will be an in-display scanner.

Impact: Both members of Huawei's P30 range of devices are expected to be driven by HiSilicon's latest 7nm Kirin 980 SoC with dual neural processing units. With these latest leaks, that apparently leaves just a few features and specifications to be unveiled once the two mobile devices go official. Huawei is presently predicted to take the wraps off in early 2019, with the predecessors for either having traditionally been announced in March.