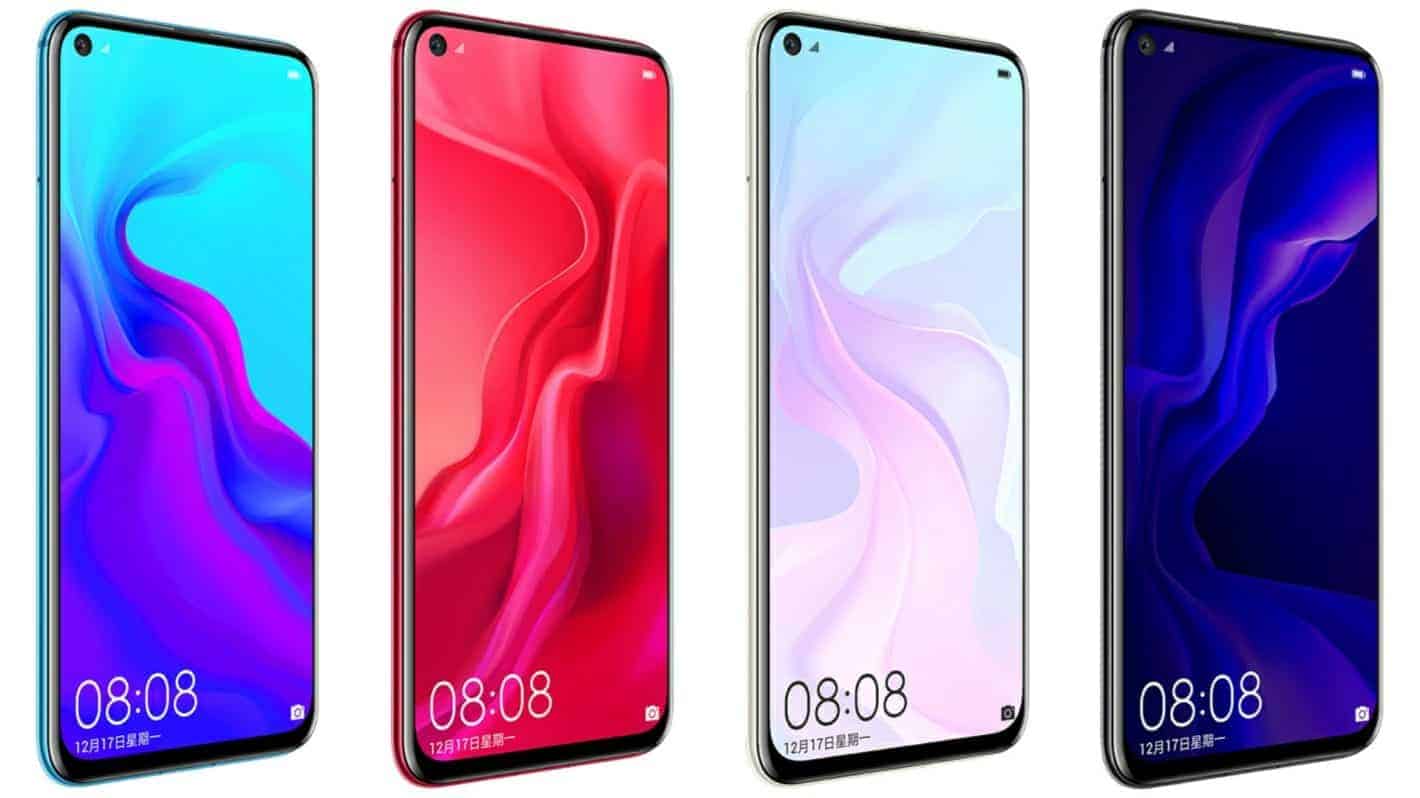 After a ton of leaks, Huawei's very first smartphone with a display camera hole is here, the Huawei Nova 4. This is, as expected, a mid-range smartphone, but it comes with extremely thin bezels, and a rather tiny display camera hole (4.5mm hole diameter, 3.05 camera diameter), at least compared to the one included on the Samsung Galaxy A8s. The Huawei Nova 4 is technically the world's second smartphone with a display camera hole, and aside from having a thin "chin" below the display, this phone has no bezel around its display, not counting the frame, of course. This smartphone is made out of metal and glass, as you can see, and the company introduced the device in China in a number of color variants. The Huawei Nova 4 comes in Honey Red, Blue, Black, and White color options.

This smartphone's display sports rounded corners, while the phone sports rounded corners as well. All the physical keys are located on the right-hand side of the device, the volume up, down, and power / lock keys, while you will find a SIM card tray on the left side of the device. The phone's back side is curved, while the phone features three cameras on the back. Those three cameras are located in the upper-left portion of the phone's back side, and are vertically-aligned, while an LED light is placed below them. A fingerprint scanner sits on the back of this phone as well, along with Huawei's logo. Now, as far as the phone's specs are concerned, this smartphone is fueled by the Kirin 970 64-bit octa-core processor, which is Huawei's flagship SoC for last year. The phone sports a 6.4-inch fullHD+ (2310 x 1080) display, and it sports a sheet of curved glass on top of that display. The Huawei Nova 4 sports 8GB of RAM and 128GB of internal storage, while a 3,750mAh non-removable battery is also a part of this package, and it supports fast charging.

On the back of the Huawei Nova 4, you will find 20 / 48, 16, and 2-megapixel cameras on the back. The 20-megapixel camera is included on the base model of the phone, while the 48-megapixel main camera comes on the more expensive variant. A 16-megapixel camera with a 117-degree super wide angle lens is also included here (on both variants), and this camera comes with an f/2.2 aperture lens. The third 2-megapixel camera (included on both variants as well) is basically there for depth of field perception (f/2.4 aperture). A single 25-megapixel camera (f/2.0 aperture, EIS) is included on the phone's front side, while the phone supports dual 4G VoLTE, and Bluetooth 4.2 LE. Android 9 Pie comes pre-installed on this phone, with Huawei's Emotion UI (EMUI) 9.0.1 skin on top of it. The Huawei Nova 4 has two SIM card slots on the left, while it seems like wireless charging is not packed in here, which is to be expected considering this is a mid-range handset. The phone measures 157 x 75.1 x 7.77mm, while it weighs 172 grams. The variant of the device with a 20-megapixel main camera is priced at 3,099 Yuan ($449) in China, while the variant with a 48-megapixel camera costs 3,399 Yuan ($492). The phone will go on sale in China on December 27, while it will probably arrive to more markets in the near future, including Europe.

As far as the design is concerned, these two handsets are somewhat different one compared to the other. The Huawei Nova 3 comes with a display notch, and a thin chin, while two cameras are included on its back. The device is made out of metal and glass, just like the Huawei Nova 4, and it's actually a similar size to the Nova 4, it's a bit narrower, though, at 73.7mm. Most people will probably say that the Huawei Nova 4 is a more appealing design when it comes to the design, mainly thanks to the fact it does not have a display notch, even though some people may have an issue with the display camera hole. The Huawei Nova 4 actually has the processor as the Nova 3, but it comes with more RAM than its predecessor, as the Nova 3 shipped with either 4GB or 6GB of RAM, depending on the variant you opted to purchase. The Nova 4 comes with a considerably more capable rear-facing camera setup, at least on paper, but it remains to be seen what these cameras can do in real life.

The Galaxy A8s was introduced a week ago, to the day. The Galaxy A8s managed to become the world's very first smartphone with a display camera hole, though that phone's display camera hole is considerably larger than the one on the Huawei Nova 4, and the phone comes with the Kirin 710 64-bit octa-core processor, Qualcomm's most powerful mid-range SoC. The Galaxy A8s has the same display size as the Nova 4, and it comes in 6GB and 8GB RAM variants. The general design of the device is quite similar to the Nova 4, as it comes with a thin "chin" below the display, and its rear-facing cameras are also vertically aligned, though the Galaxy A8s sports two cameras on the back.

The Huawei Nova 4 may become a really compelling smartphone for those consumers who are looking for a phone with minimal bezels and no display notch, though the device will be noticeably more expensive than the Honor 8X in Europe. Truth be said, the Nova 4 is a more powerful device than the Honor 8X, but it remains to be seen if it ends up attracting consumers as much as Huawei is hoping it will. As far as the device's arrival in Europe is concerned, we're still not sure when will it land, but it will almost certainly arrive in early 2019, and chances are it will be a bit more expensive than it is in China, as the same happened with the Huawei Nova 3 earlier this year. Also, it remains to be seen if Huawei will bring both 20 and 48-megapixel variants of the phone to Europe, or just one of the two. Truth be said, the latter is the more probable outcome, and the 48-megapixel variant is probably the model Huawei will opt for.